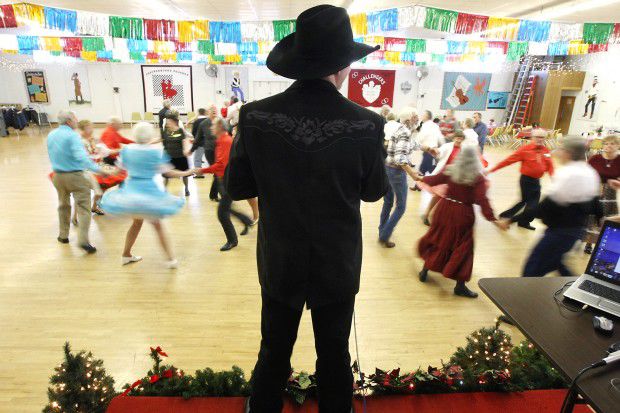 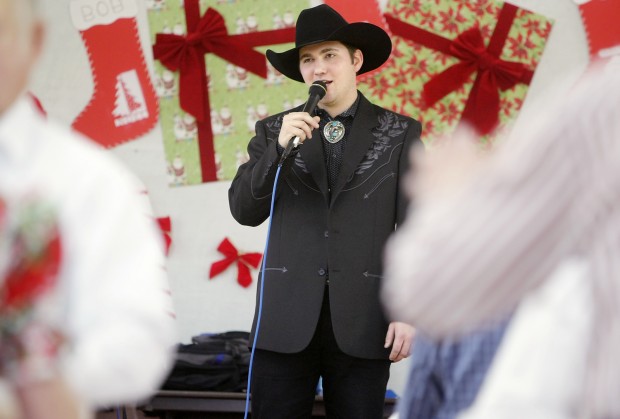 Energy and enthusiasm are hallmarks of square-dance caller Keller's style. 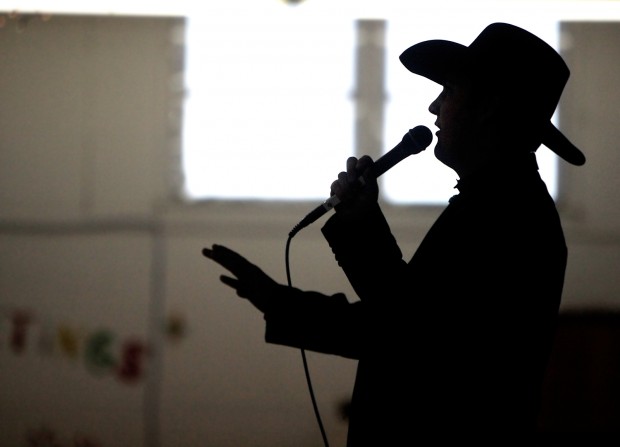 Hunter Keller sings during a square dance in Cedar Hall at MetraPark. 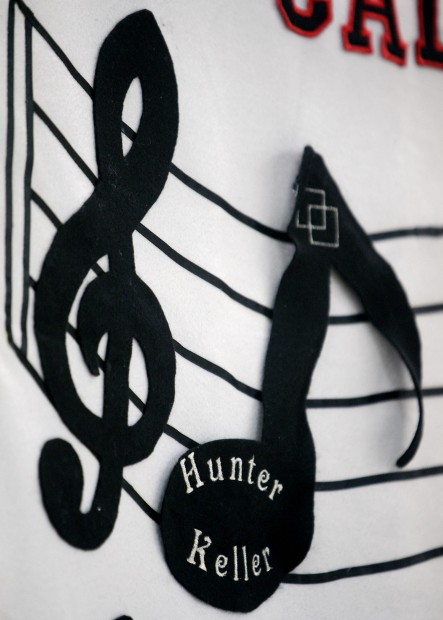 Keller's name fills a musical note on a banner inside Cedar Hall at MetraPark.

As dancers in petticoats swirl around their partners at MetraPark's Cedar Hall, Hunter Keller belts out one of Pat Benatar's hit songs.

“Why don't you hit me with your best shot,” he sings, his deep voice filling the hall.

“Hit me with your best shot. Fire away,”

As the line fades into music, he calls out instructions to the dancers.

“Heads square through,” he commands. “Touch one corner. Scoot back. Boy run. Square through three. Swing your corner. Promenade.”

At age 22, Keller has found his calling. Now he just wishes he could persuade a few more young people to join him.

On stage, Keller wears a black cowboy hat, silver and turquoise bolo and a Western-cut black jacket with black flowers embroidered on the yoke. On the square-dance circuit, he's known for his high-energy and rich, clear voice.

“He's got the voice; he's got the rhythm. He's got the charisma, which is important, said Gail Smith, a square dancer from Livingston, who spoke during a break between dances at MetraPark's Cedar Hall.

Smith and her husband, George, have danced to callers from around the West since they started square dancing 14 years ago.

Jess Perry, another Livingston square dancer who drove to Billings for a dance at MetraPark in December, likes the way that Keller makes a connection with the dancers.

“You watch the dancers, and they're having fun,” Perry said. “You watch Hunter, he's having just as much fun. That's what makes a good caller.”

Keller, who lives in Billings, has already made a name for himself on a national level as a square dance caller, the person who chooses the music and calls out the steps to match it.

The only hitch — most of his fans are old enough to be his grandparents. The dwindling ranks of square dancers make it unlikely that Keller can turn his passion into a full-time career.

He went to his first dance as a 2-week-old infant. His grandfather, Frank Leenknecht, started dancing in 1959, was a square-dance caller for many years and was active in putting together the Knothead Jamboree in West Yellowstone, an event that Keller now chairs.

“It's rare to see somebody his age call as good as he does,” Perry said.

With characteristic enthusiasm, he has

also assumed leadership roles, including chairing the Knothead Jamboree over Labor Day weekend. In square dance slang, a “knothead” is anyone who travels more than a hundred miles to dance.

In 2008, he chaired the youth committee of CallerLab, an international group that has worked to lure a generation of younger dancers by relaxing some dress-code rules and broadening the music beyond country-western.

While Keller tries to sing in his own style, rather than imitating others, his rendition of “Wear My Ring Around Your Neck,” as a singing call sounds a lot like Elvis Presley.

“He can mimic Elvis Presley, and you'd swear he was Elvis,” said Jan Weber, a Billings square dancer who started in 1991.

Comparisons to Elvis started when Keller was about 17 or 18 and escalated after he went to a Halloween party in an Elvis costume. Although Keller's a far bigger fan of Garth Brooks, he now has a collection of Elvis memorabilia, including a stand-up poster.

As a youngster, Keller disliked singing in school and never joined a choir.

“Everybody sings in the shower or in the car, but I never thought I'd be doing it professionally,” he said. He learned his first square dance singing call by listening to and copying one of his grandfather's favorite songs, “Tight Fitting Jeans.”

Presentations that he did in 4-H, gave him the confidence to relax in front of an audience. As a youngster, he was so shy that he wouldn't talk.

“I wouldn't stand on stage ever, and I'd never give a speech in front of anybody,” he said.

As a square-dance caller, the singing part was easy, he said. Learning to get the flow right to keep the dancers moving easily was much more difficult.

In Billings, Keller calls square dances four nights a week. On weekends, he regularly travels to out-of-town dances and has been to a dozen states for dances and festivals.

About half of his income comes from working as a square dance caller. The rest comes from putting in three shifts a week behind the counter at a gas station.

When he travels, he takes his music on a laptop. As a backup, he also takes a netbook, iPod and his cell phone. He also keeps three backups of his music on external hard drives. One is in a fire-proof safe at home, another is stored in a bank safe deposit box.

He has about a thousand singing calls and another thousand patter calls, spoken without singing.

Like many veteran entertainers, he likes to end each dance with a flourish.

“At the end of the night, I put on the biggest show tune that I have,” he said. His finale often includes “This Little Light of Mine,” “Forever Young” or Neil Diamond's song “Beautiful Noise.”

“You have to make sure the dancers at the end of the night go home smiling,” he said. “You want them to go home with a big smile on their face. If not, they're probably not going to come back.”

Through square dancing, Keller has made close friends across the United States. It worries him to see the ranks of square dancers dwindle. He tries hard to stem the tide.

Convincing people his age to take up square dancing is tough, he said.

Before he told his girlfriend what he did for a living, he made her promise not to laugh. In November, she went to her first beginner class in square dancing.

It's not too late to join beginning square dance lessons at Cedar Hall, south of the Grandstand at MetraPark. The lessons, with Hunter Keller as the caller, run from 6:30 to 7:45 p.m. on Thursdays.

The 12-week beginner session costs $60 per person. More information can be found at the Yellowstone Square Dance Council's website, www.squaredancebillings.com.

Energy and enthusiasm are hallmarks of square-dance caller Keller's style.

Hunter Keller sings during a square dance in Cedar Hall at MetraPark.

Keller's name fills a musical note on a banner inside Cedar Hall at MetraPark.