An unusual operation to capture and “translocate” dozens of marauding elk to a location northwest of Stanley, Idaho, ended up re-enforcing the notion that the wild animal has a mind of its own.

The original goal was to capture up to 70 cows and calves in an area between Little Camas Reservoir and Anderson Ranch Reservoir north of Mountain Home. Half-mile long fences were installed funneling down to a corral where trapped elk would be tagged, collared and loaded onto a trailer for transport to Bruce Meadows area about 20 miles northwest of Stanley. A helicopter, supported by ATV and dirt bike riders, tried to push the elk into the trap. The operation ended up trapping and transporting 16 elk.

“The first day was a learning day, and we made some adjustments. We only trapped one,” said Craig White, Idaho Fish and Game supervisor at the Magic Valley office. “The second day we caught 15.”

On the third day, they pulled the plug on the operation by mid-morning.

The operation was part of Fish and Game’s effort to remove pesky elk off farms that have been plagued with depredation problems. Fish and Game said the elk numbers are well above target goals and causing tens of thousands of dollars in crop damage.

White said as the helicopter pushed dozens of animals toward the trap, the closer they got, the more they would run off.

“Not every push was successful because these are wild animals and they have a mind of their own,” he said. “It’s worse than herding cats. I think our largest group that came through was about four or five.”

White said that by the end of the second day the elk knew how to play the game and win.

“We started to see behavior that we couldn’t even get them near that trap,” White said. “They started to figure out the game. … They were wise to it. So we decided to pull the plug.”

White said they expect the elk to be assimilated into herds near the Middle Fork of the Salmon River.

“It’s probably been 20 years since the department did a similar project and that was over in the Weiser area,” said Terry Thompson, Fish and Game regional communication manager.

Thompson said Fish and Game has been aggressively working to reduce the elk numbers in that area since they had to pay out a $1 million depredation settlement to one farmer for damages to his organic potato crop in 2018. Since then, the Idaho Legislature has put a limit on the amount any one farmer or corporation can be paid for damages. The total amount the Legislature has set aside for the entire state in depredation money each year is about $1.1 million.

“We’ve been working on this for several years,” White said. “About three years ago there was about 450 elk on the field coming in. … Last year we had 200 to 250 on average coming in.”

Fish and Game wants to reduce the number by another 100.

White said Fish and Game has used sharpshooters to kill elk and had workers spending the night in fields during the summer months hazing elk away. They have also allowed some hunters onto the land to harvest elk.

“We saw about 70% reduction in the (depredation) claim,” White said. “This year the final numbers aren’t in on the claim. They were finishing digging potatoes as we were capturing elk.”

Potato crops aren’t the only problem.

“Once these elk get into standing corn it’s virtually impossible to get them out,” Thompson said. “They are just tearing up standing corn and over several months they can do a pretty significant amount of crop damage. The depredation law requires the department to compensate private property owners for damage caused by big game.”

“We have several elk that have collars on them so that helps us track them, especially in the summertime when they’re moving in on the crop lands,” he said. “These elk have learned to do it at night. The tech’s schedule was basically night until 6 or 7 in the morning.”

Thompson said there was some concern by hunters that Fish and Game would be doing its elk capture in the middle of hunting season.

“But these elk reside almost exclusively on private property, which makes them unavailable to hunters,” he said. “About the only time these elk leave private property is when they go on winter range down on (Bureau of Land Management) ground.”

Editor's note: This story has been clarified to note that Wyoming Game and Fish Department's fixed budget is the reason the agency does not wa… 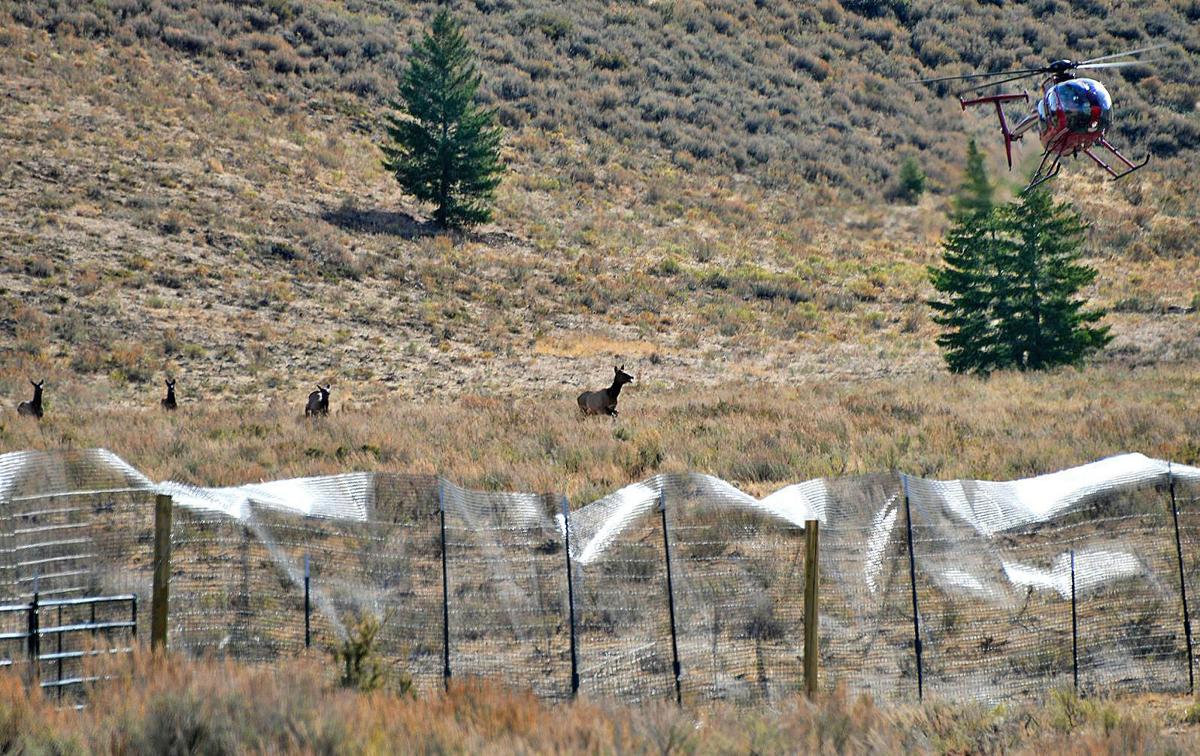 A group of elk are chased into the trap by a helicopter during trapping operations north of Mountain Home last month. Idaho Fish and Game captured 16 elk for transport to central Idaho. 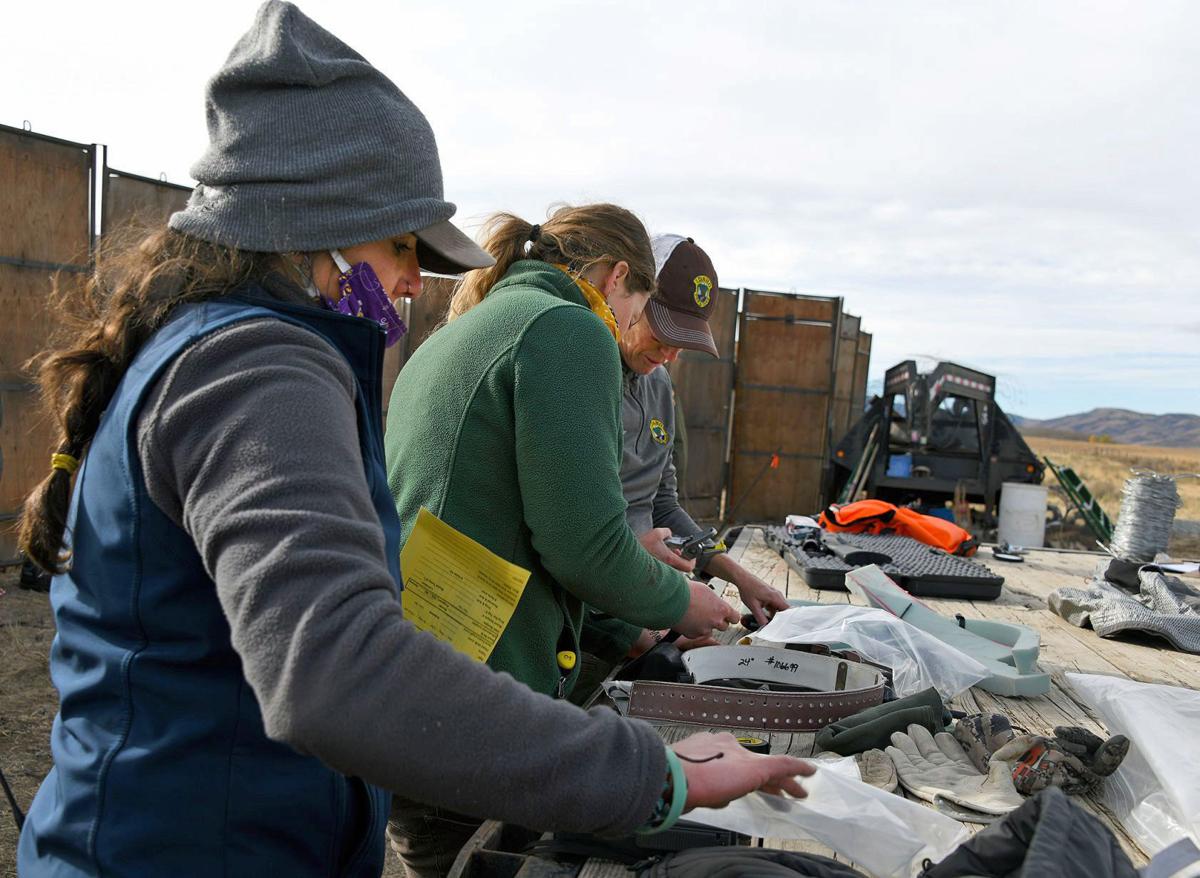 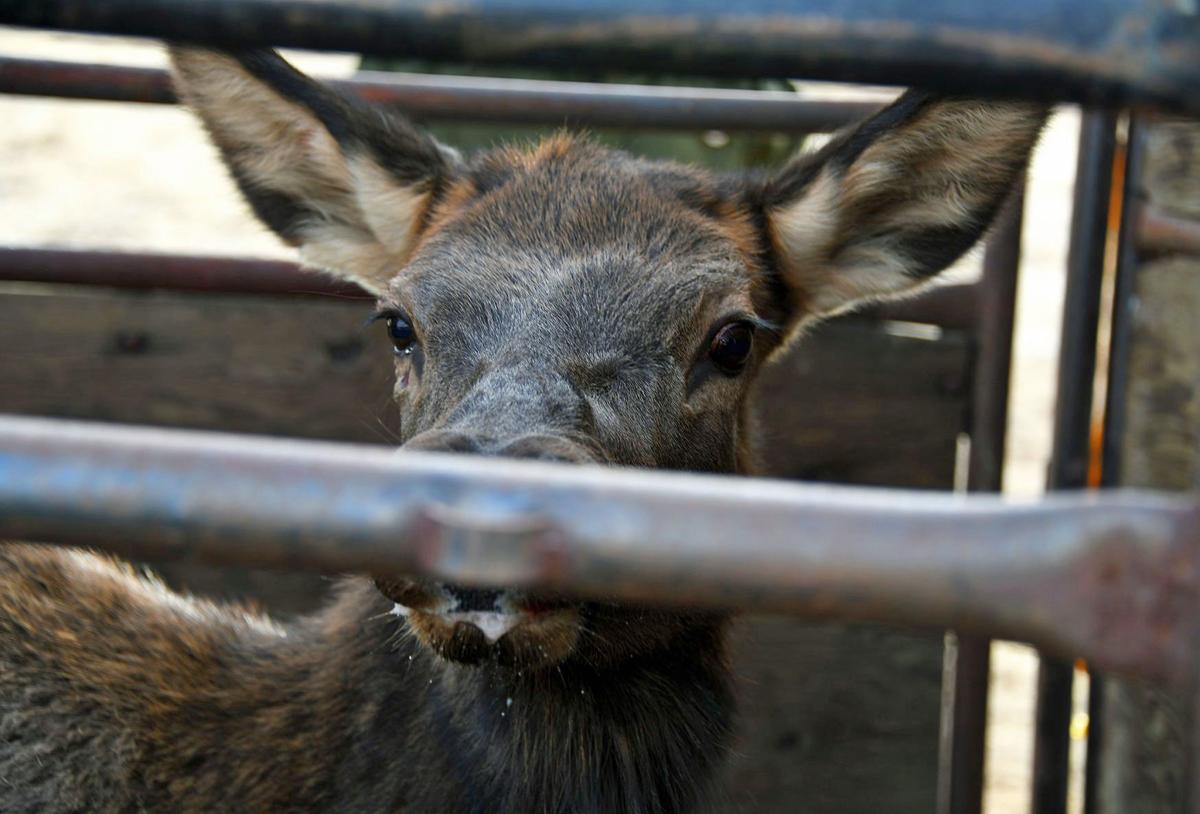 One of 16 trapped cow elk is about to be processed before transporting to central Idaho. The elk weighed between 300 and 500 pounds.