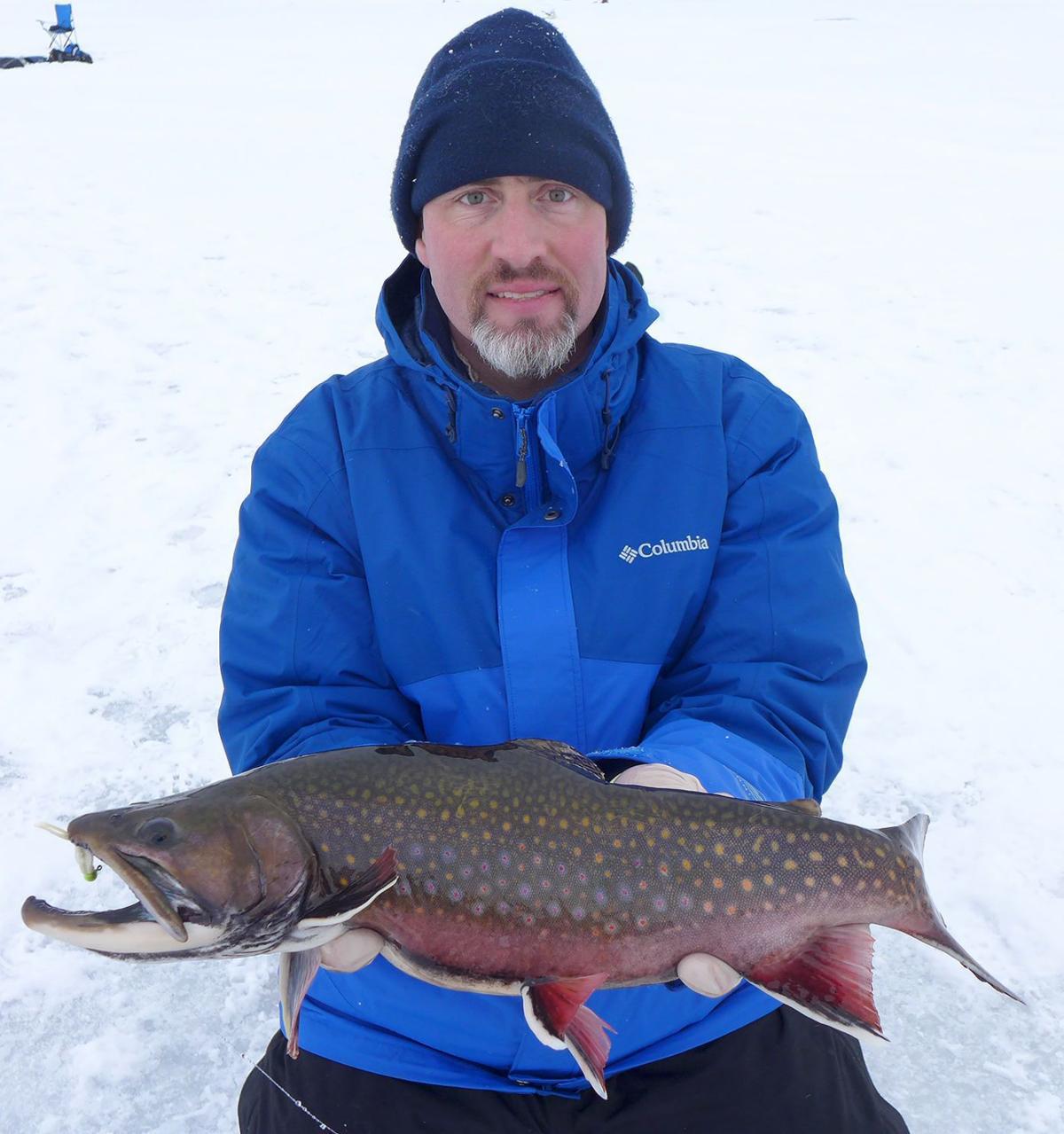 Matt Dungan, of Rigby, Idaho, holds a brook trout he caught with the help of his JawJacker device. Dungan works as a nurse in Idaho Falls and manages his business shipping the JawJacker around the world. 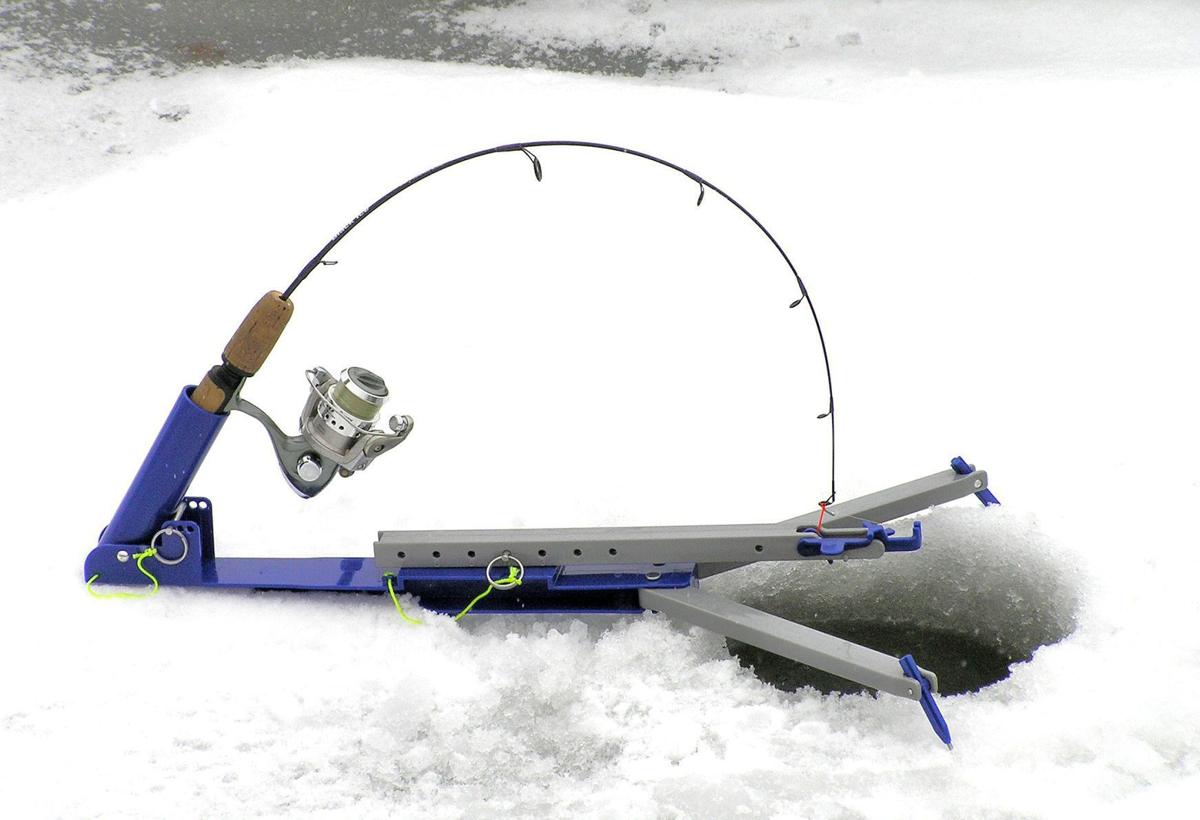 Matt Dungan’s JawJacker uses the bent rod as a spring to set the hook when a fish tugs on the line and releases a trigger.

Matt Dungan, of Rigby, Idaho, holds a brook trout he caught with the help of his JawJacker device. Dungan works as a nurse in Idaho Falls and manages his business shipping the JawJacker around the world.

Matt Dungan’s JawJacker uses the bent rod as a spring to set the hook when a fish tugs on the line and releases a trigger.

Matt Dungan’s highly successful ice fishing gear business started when he was a boy trapping possums in the woods of Tennessee.

“I was always figuring out trigger mechanisms,” Dungan said. “I would make live catch traps.”

Then as a student at Ricks College in Rexburg, Idaho, Dave and Gerald Oldham took him ice fishing for the first time at Island Park Reservoir.

“They were just looking at their rod tip and waiting for them to bounce when the fish bit,” he said. “I thought, there’s got to be a better way.”

He made up devices that used the bent rod as a spring with a trigger mechanism to hook a fish when they nibbled on the bait.

“I caught three or four fish with them,” he said about that outing.

The idea was put on a shelf while he studied nursing, got married, bought a house and began working. After a few years he was living in Rigby and working as a nurse in Idaho Falls. He went ice fishing again with a friend, this time to Strawberry Reservoir in Utah.

“I made up a couple more of these devices, and I caught five or six of these nice cutthroats,” Dungan said.

No longer a poor college student, he entertained ideas of making and selling a device that would give ice fishers the ability to set hooks without hovering over their holes. He called it the JawJacker.

“I thought it was kind of a catchy name,” he said. “A little different. It sets the hook in their mouth and kind of jacks their jaw.”

The device would go on to sell thousands each year and eventually make more money than his nursing profession.

“I just started tinkering,” he said. “I’d always built traps and stuff. I had a drill press and table saw, and I made some prototypes.”

Hook-setting devices have been around since the 1800s, but they were often huge and cumbersome, ill-suited for ice fishing.

“I wanted to make this thing light and compact,” he said. “When you go ice fishing there is a lot of stuff you have to take on the ice. You don’t want something big and cumbersome.”

After coming up with his design, an engineer neighbor who had CAD software helped him draw up designs. He obtained a patent on his trigger mechanism in 2007. Then he found a manufacturer in Texas who could create plastic injection molds and build and box the final product in his China plant.

But before the JawJacker could become reality, Dungan needed money.

“It cost me quite a bit of money. I basically took a second mortgage out on my house. I had $50,000. It was enough money to buy the injection molds that I needed,” he said.

The first year he made 1,000 JawJackers and sold about half online and the rest at Sportsman’s Warehouse. Each year afterward his business grew with new connections with Bass Pro Shops and other outdoors stores and word of mouth. The JawJacker retails for $45.

“That’s actually advertising, when you get into the bigger stores. It kind of validates you as a good product and not just a gimmick,” he said.

Ice fisherman Chris Dougan of Idaho Falls, who admits to having thousands of dollars worth of gear, says he uses the JawJacker.

“The JawJacker is definitely worth the money,” Dougan said. “What happens when those fish hit, it’s such a light hit sometimes you don’t even realize you got a hit. If you have four or five poles out, and you’re watching the one that you’re jigging, the JawJacker comes in super handy. When you’re in the tent you hear the JawJacker go ‘bing’ and you’re good.”

Dungan’s latest product hitting the market this past ice fishing season is called the Jigging JawJacker. The JawJacker attaches to a motorized base that raises and lowers the rod, line and jig automatically to attract fish.

“I sold it for the first time last year,” he said of the Jigging JawJacker. “It’s done pretty good. I sold everything I had last year. I had about 5,000 and sold them all.”

He also sells a selection of jigs and ice fishing rods on his website. The jigs are made for him by “a guy in Minnesota” and the graphite rods are made for him in China. His marketing strategy has been to post YouTube videos online to demonstrate the JawJacker. His video helpers have been family and relatives.

“People learn I’m a one-man show and it encourages them to buy it to support me rather than their money going to some big company,” he said. “I do a lot with my father-in-law at Fort Peck (Mont.) Reservoir. Those are my kids and brother-in-laws and their kids on the videos.”

Samples of his videos can be found at jawjackerfishing.com.

With the success of his business, he’s been feeling the pressure of perhaps giving up nursing and going full-time with his JawJacker. He’s had orders from as far away as Russia and Sweden.

“It’s getting to the point where it’s hard to manage both,” he said. “I’d rather put my time into the JawJacker.”

Travel to one of Bozeman’s most popular winter forest access sites on a week day and you won’t be alone, which is a good thing if your car bat…