Wyoming’s small population of about 50 common loons is related to those found in Alberta, Saskatchewan and Manitoba, according to recent genetic results — not closer populations that nest in Montana or Washington, which are still more than 200 miles away.

“That’s a little bit of a surprise,” said said David Evers, executive director and chief scientist for the Biodiversity Research Institute, which published the results in a recent status update.

That’s just one of the amazing facts about common loons, a species that has attracted Evers’ attention during more than 40 years of research. His entire business, based in Portland, Maine, was built around evaluating loon populations and, by sampling their blood, determining the prevalence of mercury in the environment.

“For me, I’ve always had this love of loons,” he said.

So it’s no wonder that the uniqueness of Wyoming’s common loons has also caught Evers’ attention. They are an unusual population. At some point between the receding of the glaciers at the end of the last ice age 11,700 years ago and Euro-American’s settlement of the West, those connections were severed leaving Wyoming’s loons all alone, which is not good.

“Because of that, you can have the best habitat anywhere, but they will fly by it,” he added.

So once that link to the north was snapped, other loons never moved in. As a result, the Wyoming loons nest farther south than any other western loon population. The majority spend their nesting season in Canada and Alaska with “little fringes of the range that extend south into the U.S.,” Evers said.

Common loons are one of five loon species, all members of the Gaviidae family. All but one, the arctic loon, has been sighted in Montana. Montana has a fairly strong common loon population in the northwest corner of the state in places like Glacier National Park and the Swan Valley.

Loons are perhaps best known for their haunting calls which have been compared to yodeling, wailing or “quavering laughter,” according to Peterson Field Guides. In Minnesota — the land of 10,000 lakes — the common loon is the state bird.

The black and white fish-eating birds float low in the water. They can measure up to 3 feet long and have sharp beaks. Their back has a checkered black and white pattern. Some common loons have been known to survive 35 to 37 years.

In 2013 Evers’ company helped form the Wyoming Loon Working Group to catch, tag and monitor the small loon population in the state. The results of that work, which has included members of the Wyoming Game and Fish Department as well as Yellowstone National Park and two national forests, has been revealing.

The state now recognizes the bird as a species of greatest conservation need.

“It’s only in the past decade or so that the state of Wyoming has realized this is a very high priority species,” Evers said.

The Caribou-Teton National Forest has instituted some seasonal trail closures to protect nesting loons from human disturbance. That’s probably the biggest threat to the isolated population, Evers said. With 4 million people a year now visiting Yellowstone National Park in the summer, keeping the birds protected from human disturbance won’t be easy, he added.

“This population is very sensitive to disturbance,” said Zack Walker, of the Wyoming Game and Fish Department.

The birds typically nest in the month of June, but may nest earlier if it’s warmer, and they will re-nest if the first hatch is unsuccessful. That means keeping humans away from nesting areas may extend from May to July. Unfortunately, July is also one of the busiest times for travel to Yellowstone and its surrounding environs.

“A lot of these (nesting) areas are on protected public lands,” Walker said.

That's a blessing and a curse. The public likes access to such lands, but the agencies are also able to limit traffic during key nesting times.

The birds’ fidelity to specific areas is nothing short of amazing. After fledging at 11 to 12 weeks, new chicks will stay behind a few weeks after their parents fly south for the winter. Without having ever flown to that location, the young birds will also fly south to the same area.

“They’re gone for three years, for the most part, staying on the ocean” said Susan Patla, a retired WGFD biologist who participated in the common loon studies.

When they come back, most of the young loons are within 15 miles of their natal lake, despite never having flown there from the south before.

In 2015, a banded Wyoming loon from Wolf Lake was recovered. The geolocator on the bird indicated it had flown south to the southern tip of the Baja Peninsula, almost 1,500 miles. Whether all of the Wyoming birds winter that far south or in the same area is unknown. It’s also unknown if their Canadian relatives migrate to the same area, since they’ve never been tracked.

The young birds will wait until they are about 5 to 6 years old before picking a breeding territory. Because they are fond of certain areas, it can mean competition with other loons for the best spots.

“So the loon’s worst enemy (in nature) is another adult loon,” Evers said.

The birds will dive underwater and rocket upward to spear their opponent in the breast with their sharp beaks. They will also grab each other by the neck.

“It’s always a same-sex conflict,” Evers said. “If they win, the female will bond with that male.”

So the female loon’s fidelity is to the nesting location, not the male mate.

Consequently, in their summer nesting habitat the birds are constantly on the lookout for underwater attacks by other common loons. Once they return to their wintering grounds the birds are much more social, congregating in groups of 30 to 40 birds, Evers said.

For now, the Wyoming common loon population is stable. Whether such a low population is a genetic concern for inbreeding is uncertain.

Other threats the birds face are climate change that could raise or drop lake levels, deadly waterborne bacteria and the contaminant mercury that can accumulate in the fish they eat. Recent studies have already warned that Minnesota’s loon population might abandon the state given warming trends.

Moving common loon chicks to a new area to increase the range of the birds in Wyoming has been a topic of discussion, said Walker, of the Wyoming Game and Fish Department.

“The question now is: Can the population be increased in distribution and number?” Patla said. “In Minnesota they are actually moving chicks around to different parts of the state.”

“Recolonizing that Wyoming population would take a very long time,” Evers said. “So it’s important to protect these small populations.”

The bigger the loon, the shorter their migration, so the largest birds live closest to the coast. Common loons can weigh 5.5 pounds to more than 13 pounds with wingspans of more than 4 feet.

The presence of lake trout in Yellowstone Lake has affected the region’s loons. Since loons dine on small fish, the loss of cutthroat trout in the lake — because lake trout eat the trout — has reduced that food source. Loons have also been trapped in nets set to capture lake trout, and some bald eagles have killed loons in the absence of cutthroat trout as a food.

The other species of loons found in North America are the red-throated, Pacific, arctic, and yellow-billed.

One of the best areas to see loons in Montana is at the north end of Salmon Lake, according to Gary Swant of GoBirdMontana.

“Common Loons are famous for their eerie, beautiful calls,” according to the website All About Birds. “Among these are the tremolo, a wavering call given when a loon is alarmed or to announce its presence at a lake. The yodel is the male loon’s territorial claim. Each male has his own signature yodel. If a male moves to a different territory, he will change his yodel. The wail is the haunting call that loons give back and forth to figure out each other’s location. Hoots are soft, short calls given to keep in contact with each other. Parents might hoot to a chick, or one mate might hoot to another.”

Two visitors have been cited for walking on Old Faithful in Yellowstone National Park over the weekend.

Series of talks to examine importance of public lands

A new wave of research into migratory animals has positioned Wyoming at a crossroads.

High-altitude wolf in Himalayas is unique

The Himalayan wolf is a unique wolf adapted to the harsh life in Asia's high altitudes where low oxygen levels challenge all life forms.

If you’ve ever wondered about the water quality in a stream, river or lake you are fishing, just ask a mayfly. 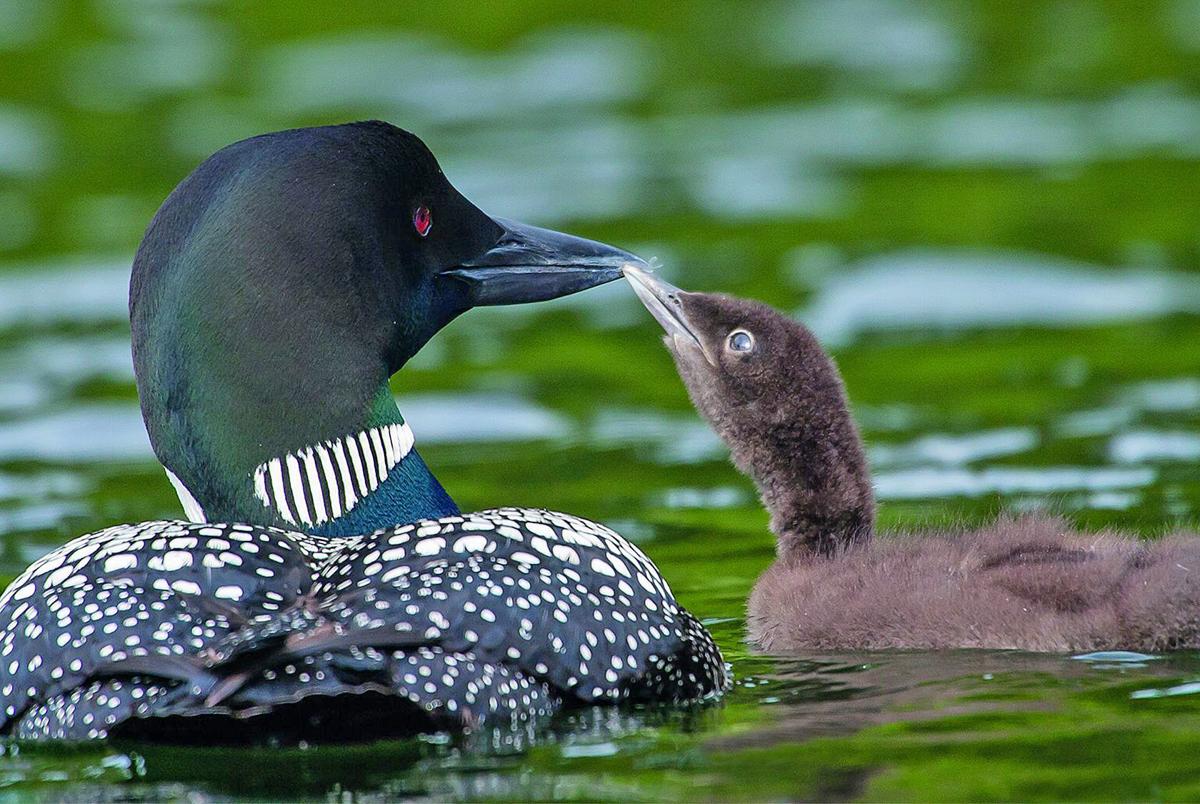 Common loons typically nest in Wyoming in the month of June. The nests are built close to the water and therefore can be impacted by flooding or drought. 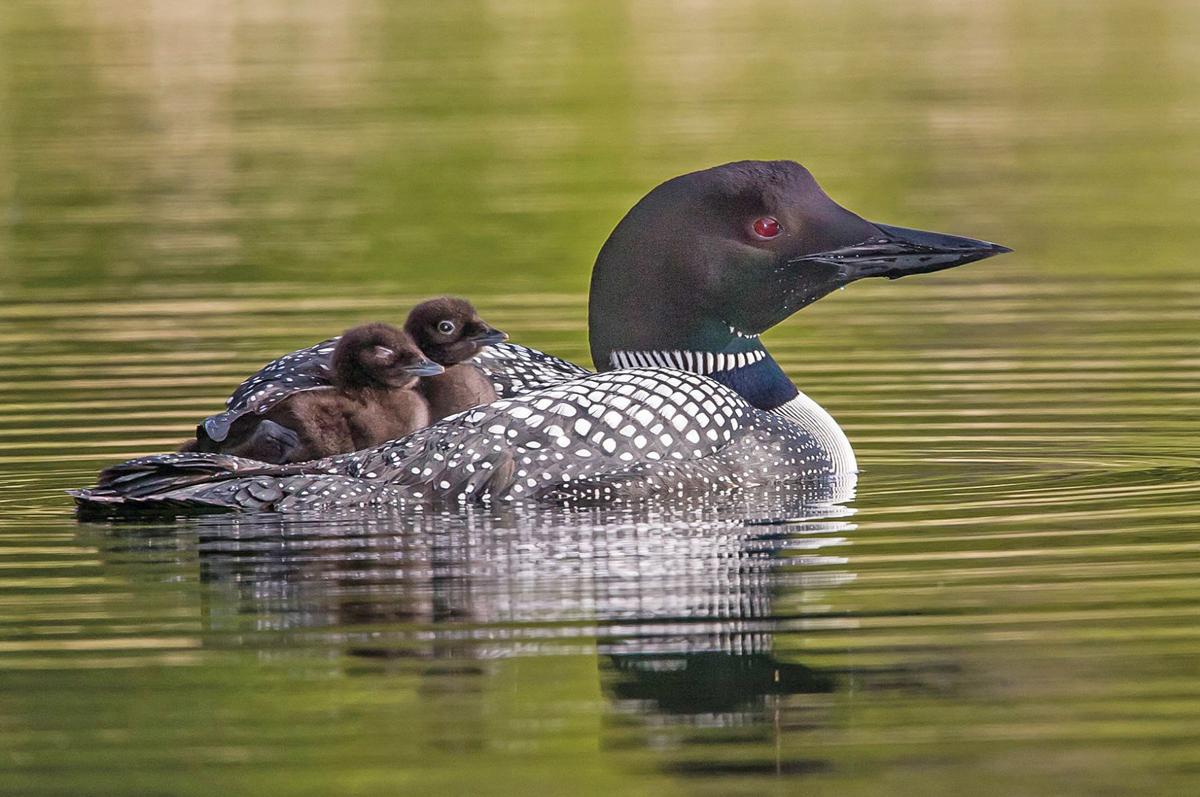 Loon chicks will fledge in about 11 to 12 weeks. Their parents will leave the chicks behind as they fly south, meaning the youngsters fly to their coastal home without ever having been there. 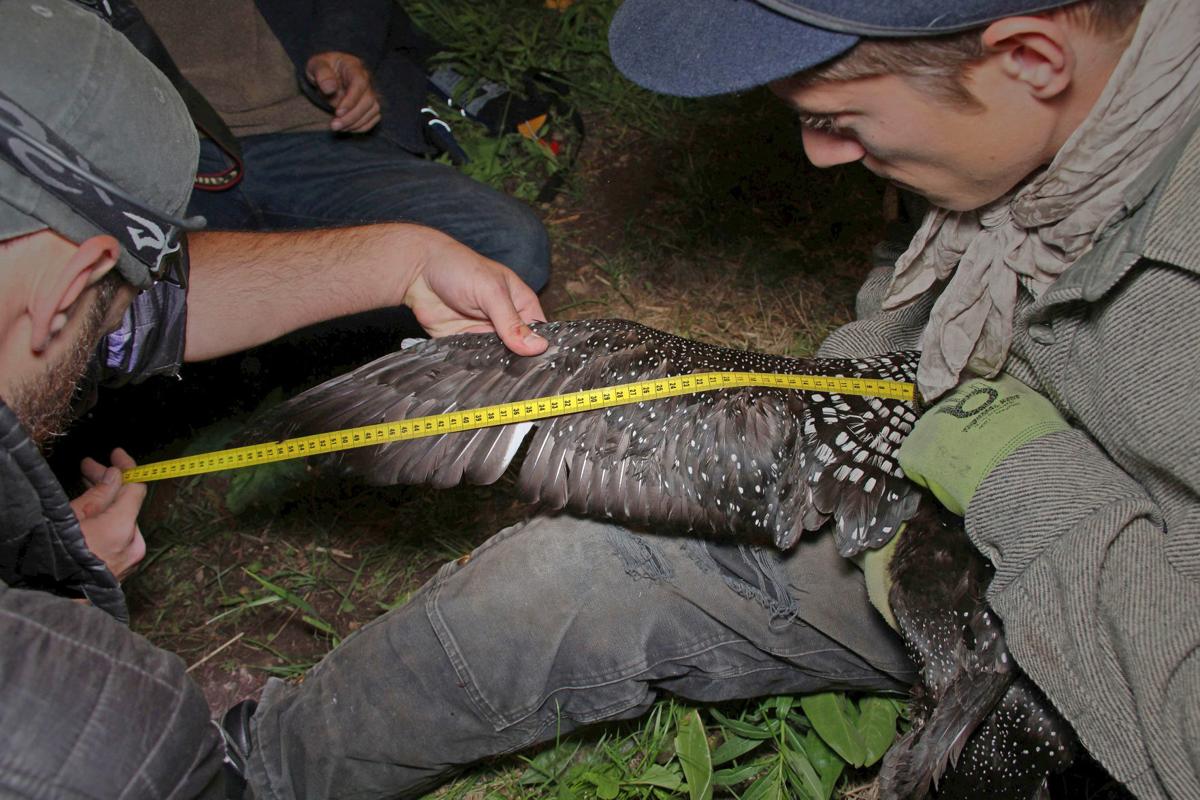 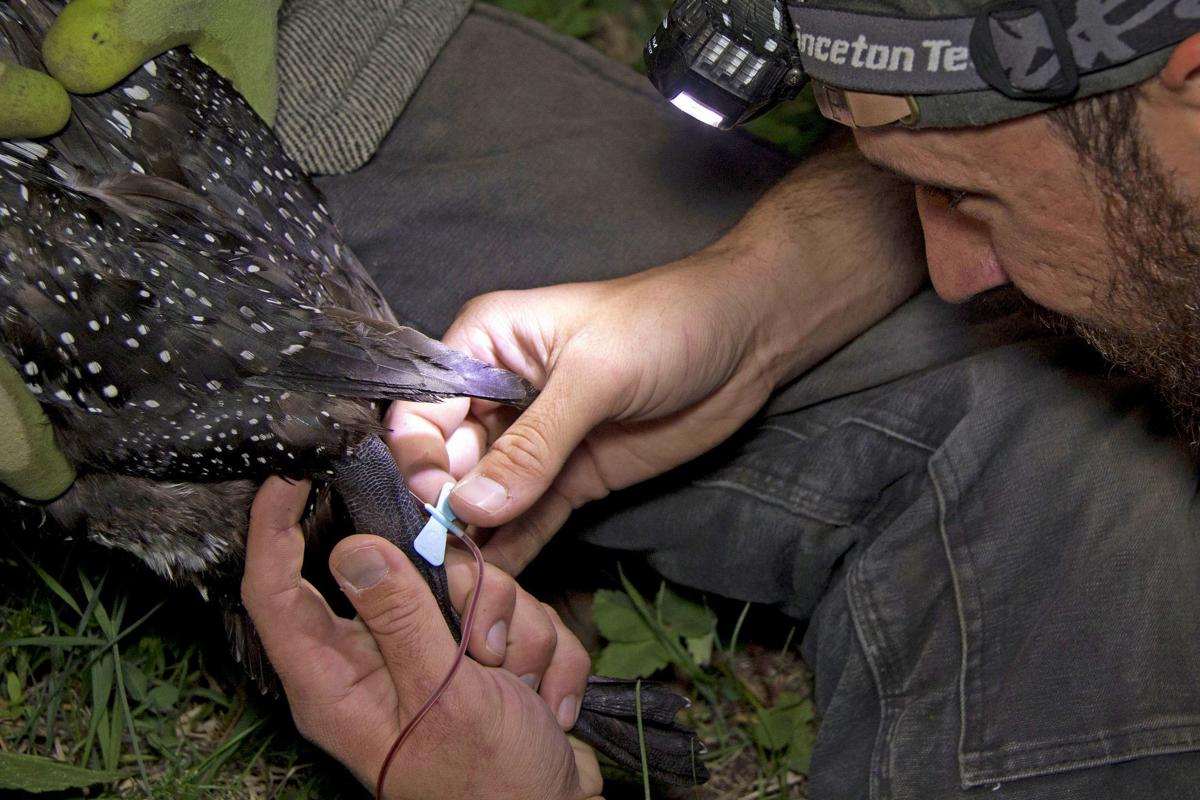 Chris Persico of Biodiversity Research Institute takes a blood sample from a common loon during capture and tagging operations on a Wyoming lake in the Caribou-Targhee National Forest. 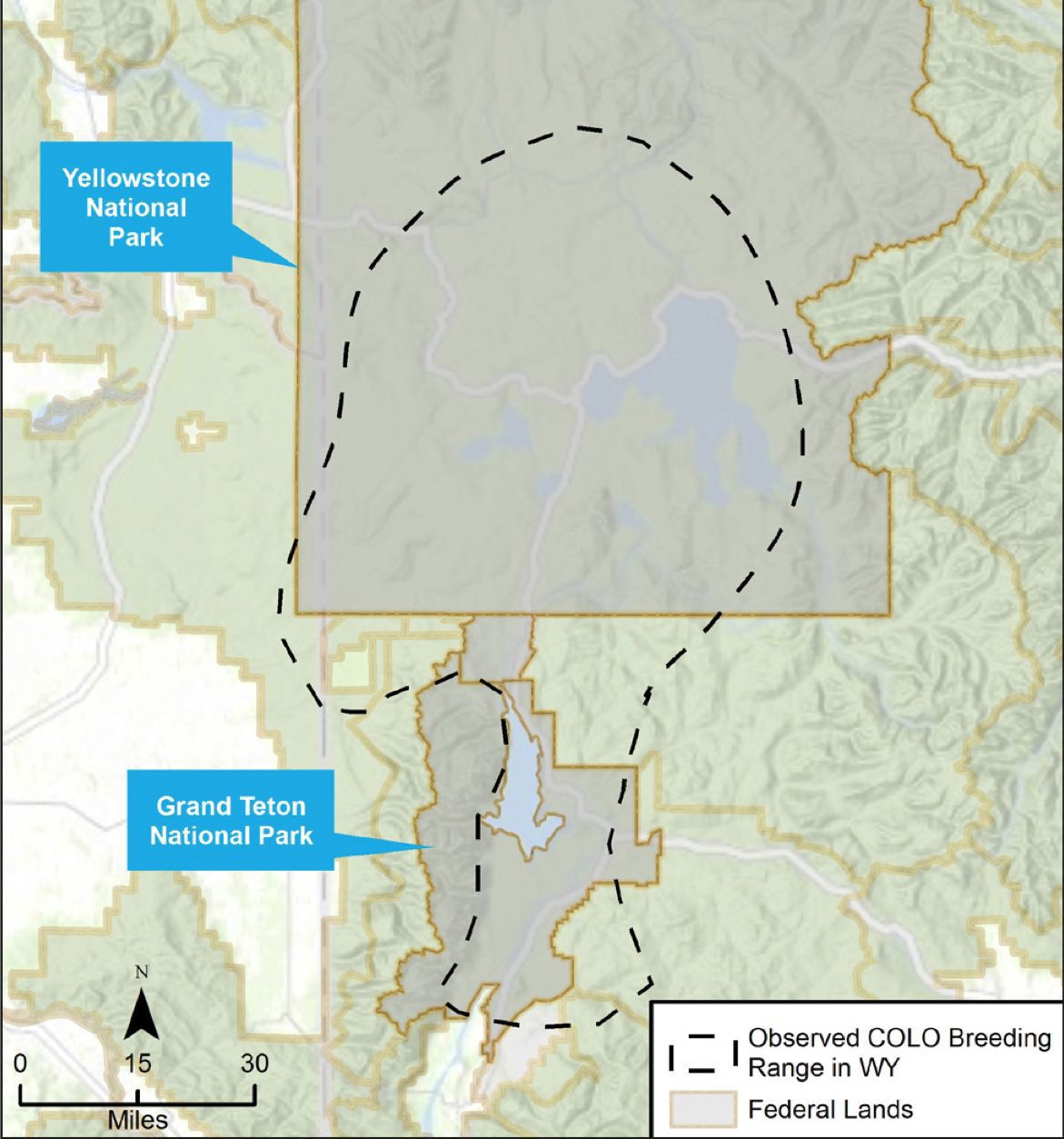 Wyoming's common loon population is concentrated in the northwestern part of the state, with the majority using Yellowstone National Park's habitat. 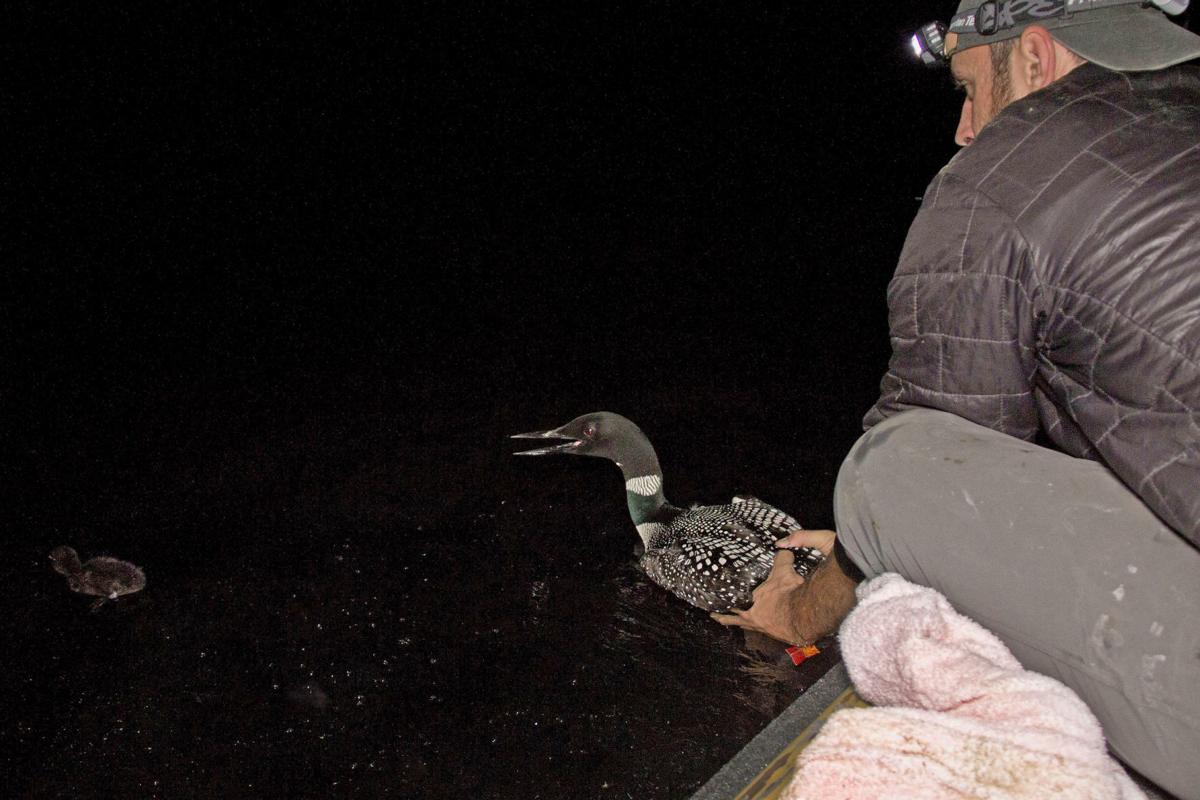 Chris Persico releases an adult common loon. The loons are captured at night using a chick call. When the birds come close they're caught in a salmon net.