Yellowstone National Park may feel like a remote location, far from the problems of industrialized society. However, a recent study of Yellowstone Lake shows microplastics have infiltrated the aquatic food web, showing up in the stomachs of lake trout, cutthroat trout and tiny crustaceans on which both fish feed.

The research was prompted by another study examining lake trout diets, conducted by Stephanie Driscoll, of the Montana Cooperative Fishery Research Unit at Montana State University. When Driscoll told scientist Chris Guy she had found plastic in a lake trout’s stomach, he said it “was just like a gut punch.” Guy works for the research unit as a U.S. Geological Survey scientist.

The impacts on the lake’s delicate food web are unknown, said Todd Koel, the park’s lead fisheries biologist. As a next step, Guy is seeking funding to explore this research in laboratory experiments. He said the discovery also spurred interest in analyzing the total amount of microplastics in Yellowstone’s watersheds. Such studies could provide a baseline to see how the pollution level changes over time.

“Exposure to microplastics has been shown to negatively affect physiology, feeding behavior, and fitness in aquatic organisms,” according to Driscoll’s research published in the journal Water. In small crustaceans, the plastics are broken down and may “compromise growth and reproduction.” Driscoll was lead author of the paper. Guy and Hayley Glassic, of the research unit, and Koel were coauthors.

Microplastics are defined as particles of plastic less than 5 millimeters in size. Many of the fibers originate from degrading plastic garbage — everything from drink bottles to package wrapping. The fibers are so small and light they can be carried by the wind and deposited in remote places like Yellowstone Lake — “considered to be a pristine environment situated within the most remote watershed in the contiguous United States,” the researchers noted.

The study found the greatest concentration of microplastics in water samples taken from the surface, and there were more particles found in the water than in lake trout, cutthroat trout and amphipod (tiny crustacean) samples.

Out of five fish of each species, two lake trout guts and one cutthroat contained three particles of microplastics. Of 32 amphipods, only one contained an “identifiable non-organic particle.”

The identified contaminants ranged from a glass fiber to rubber, plastic and cellulose. Although a source of the microplastics could not be identified, the researchers said “it is highly plausible that some of the plastic observed in this study is a byproduct from the 4 million people who visit Yellowstone National Park annually.”

The concern about the fibers is they can “contain surface chemicals or accumulate heavy metals that can result in acute mortality, endocrine disruption, or reduced predatory behavior” in species that consume them.

“What was interesting is that we found it in different parts of the food web,” Guy said.

The study highlights yet another challenge for the high-mountain lake where Koel and his associates have been battling to remove illegally introduced lake trout for a decade. Lake trout dining on cutthroat trout sent the native fish population into a nosedive, plummeting 95% in a decade. The loss of the keystone species had ripple effects, including a decline of osprey and eagles nesting in the area, as well as the loss of a spring food source for grizzly bears when the fish spawned in streams.

Then in 2019, a nonnative cisco showed up in one of the lake trout capture nets. The 3-year-old female fish was born in the lake, according to otolith testing, meaning its parents or grandparents are successfully breeding in the water. Otoliths are fish ear bones. A chemical analysis of the bones can reveal the waters in which a fish was born and where it lived.

Koel said the fish had to be intentionally planted in the lake, where the species will likely flourish.

“They did not get dropped in here by an eagle or anything like that,” he said. “They were intentionally brought to the lake by humans. The reason for that … is hard to imagine.”

Koel said about 10,000 captured lake trout had their stomachs examined but no other cisco were found during last year’s netting season. Cisco will compete with native Yellowstone cutthroat trout for food.

The lake trout netting program, which began in 1994, coupled with new efforts to kill lake trout eggs following spawning, helped push the fishes’ population to historic lows. More than 3.65 million have been killed since netting began, Koel said, and adult lake trout have been reduced by 80%. However, recruitment of 2-year-old fish remains strong. Last year, with more than 6,000 miles of monofilament nets set in a serpentine pattern, 300,000 lake trout were captured.

Cutthroat trout populations have rebounded somewhat, with more large fish identified and spawning runs returning to tributaries from the lake, like Atlantic Creek in the remote Thorofare Valley. That has prompted a reappearance of backcountry trips by anglers to the headwaters of the Yellowstone River, reviving an industry previously depleted as cutthroat trout declined, Koel said. The recovery of that fishery has been good public relations for cutthroat trout and the restoration project, he added.

To kill lake trout eggs, the park has experimented with dumping dead lake trout on spawning beds. The decay robs the water of dissolved oxygen, killing the eggs. There are 14 identified spawning sites in the lake and another 10 that are suspected sites but no eggs have been found.

Another means the park has experimented with to kill eggs is the use of pellets made of soy and wheat gluten that are carried by a helicopter in a seed spreader and then dispersed on the water. An experiment using the pellets on spawning beds off Carrington Island in 2019 and 2020 found almost all of the eggs were killed, Koel said.

“We believe this method has potential” for other sites, he added. The Carrington Island spawning beds are relatively shallow compared to some other sites, the deepest of which are 60 feet underwater.

Even with these aggressive methods, Koel said there is no current way available to permanently eradicate lake trout in Yellowstone Lake, although in the future some genetic method may be developed.

“They will always be in the lake into the foreseeable future,” he said. “The suppression will have to continue annually to maintain the population at low levels. We are just trying to develop ways to make that more efficient long-term.”

The presence of cisco will complicate the situation.

Yellowstone National Park’s fishing season opened on May 29. Fishing in the park attracts 40,000 anglers annually, only 1% of the 4 million annual visitors.

The majority of anglers, about 20%, fish Yellowstone Lake. The next most popular destinations are the Firehole River (13%), Madison River (12%) and Slough Creek, the Lamar River and Yellowstone River each attract 8%.

This data is collected from self-reporting by anglers. New this year, the park will put the information online, eliminating the requirement that someone punch in all of the data submitted on cards.

From the angler report cards, the park fisheries staff has calculated that each trout in the Lamar River is potentially caught and released an average of five times a year. Sixty-two percent of the fish caught by anglers are native cutthroats with rainbows and brown trout each accounting for 11%.

Another 4,000 visitors bring boats into the park, about 900 of which are motorized. All watercraft must be inspected for aquatic invasive species before being launched in Yellowstone.

Signs that your phone may have been hacked

Signs that your phone may have been hacked

Grammar police! Are you using 'to whom' wrong?

Grammar police! Are you using 'to whom' wrong?

Two summers ago, a gillnetting crew working to catch invasive lake trout on Yellowstone Lake pulled up its nets and found a small, hand-sized …

Fees for fishing and boating permits in Yellowstone National Park are more than doubling, the Park Service announced on Wednesday.

A new fishing access site on the Yellowstone River in the Paradise Valley could be created under a proposal by Montana Fish, Wildlife & Parks.

Lake trout suppression efforts at Yellowstone Lake are working but the species hangs on despite netting. 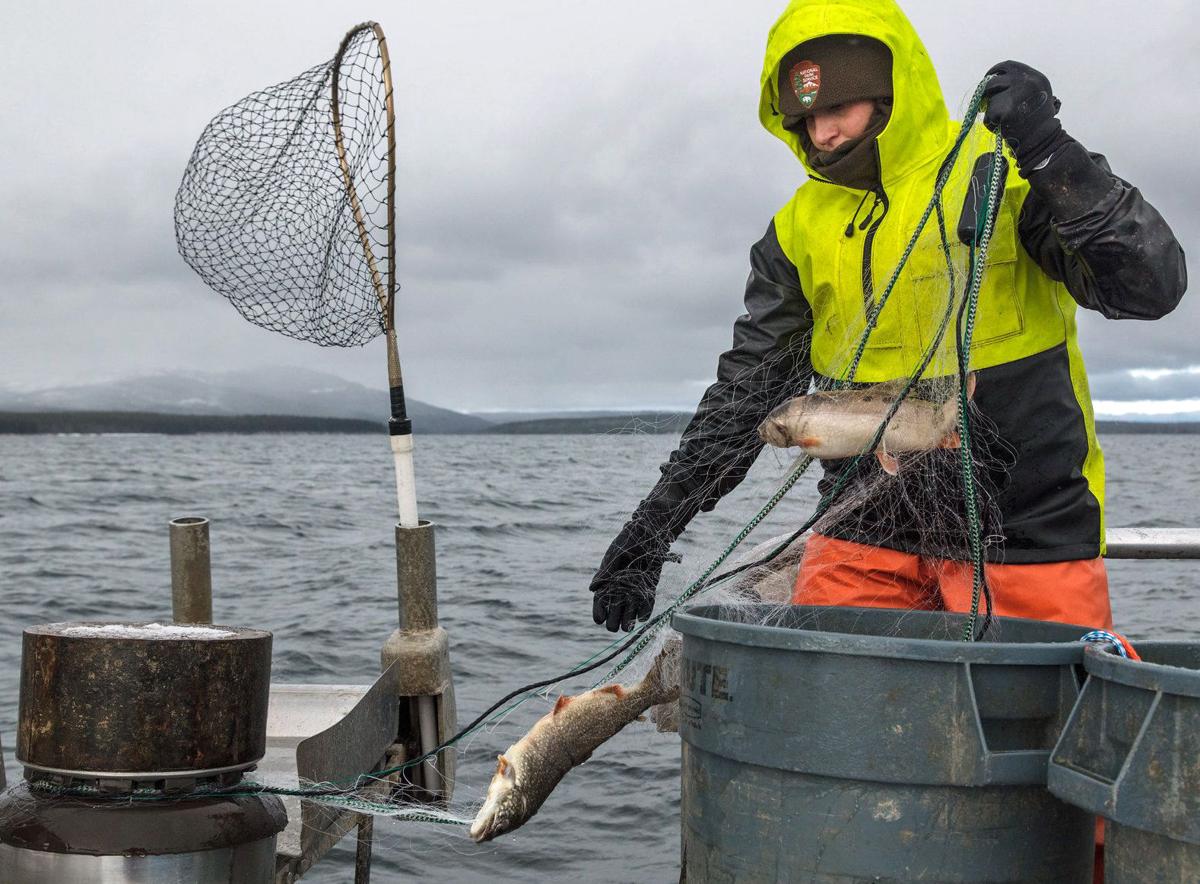 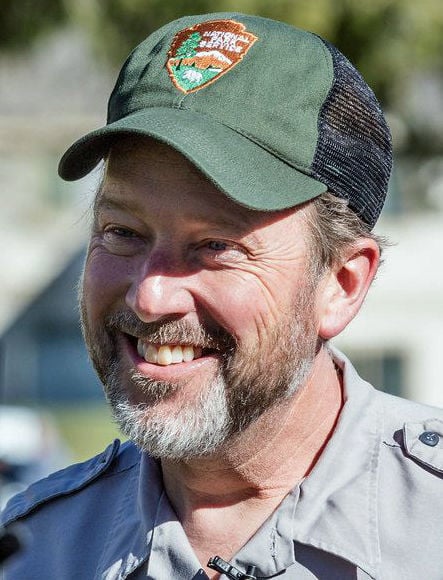 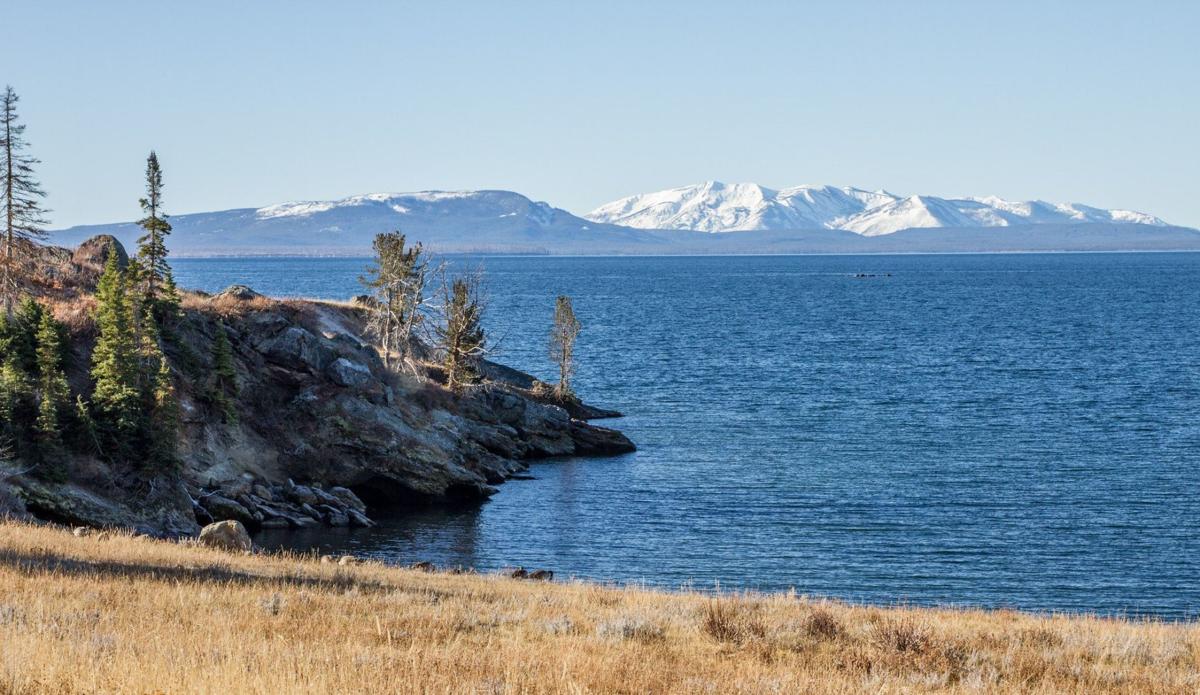 Yellowstone Lake is the largest high-elevation freshwater lake in the United States, spread across 136 square miles. 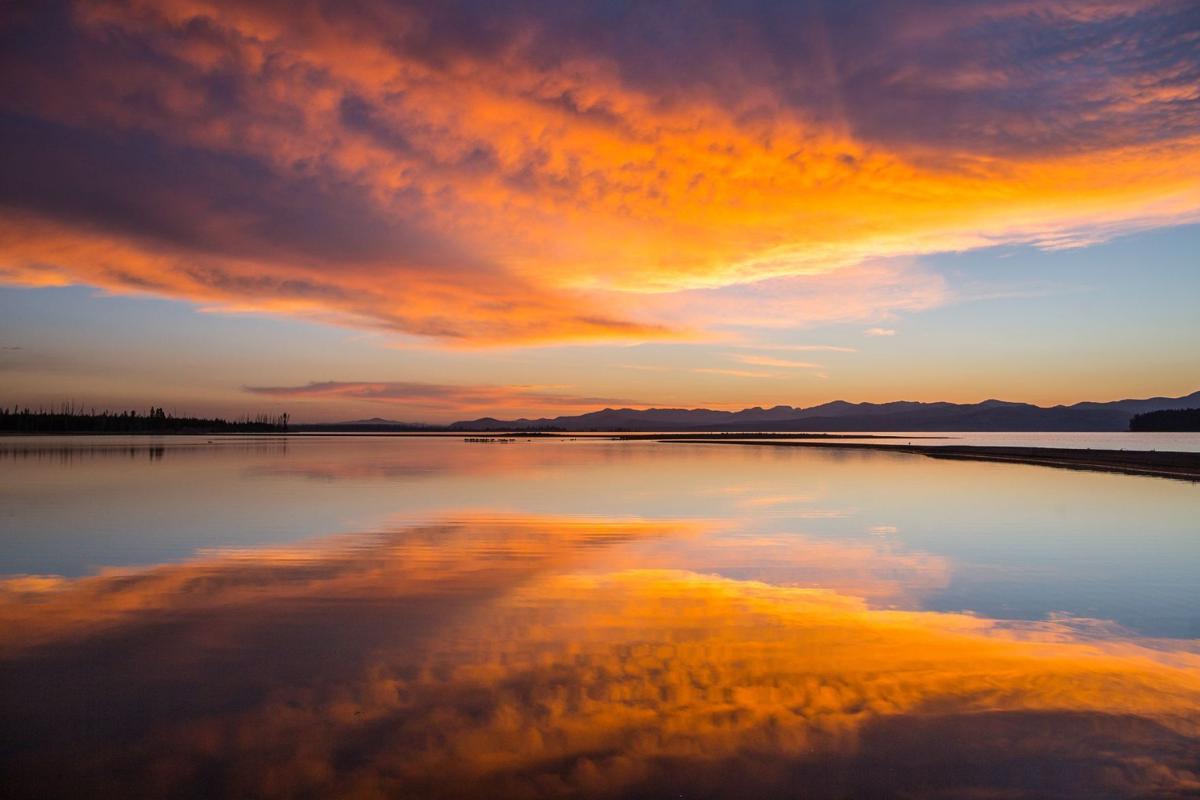 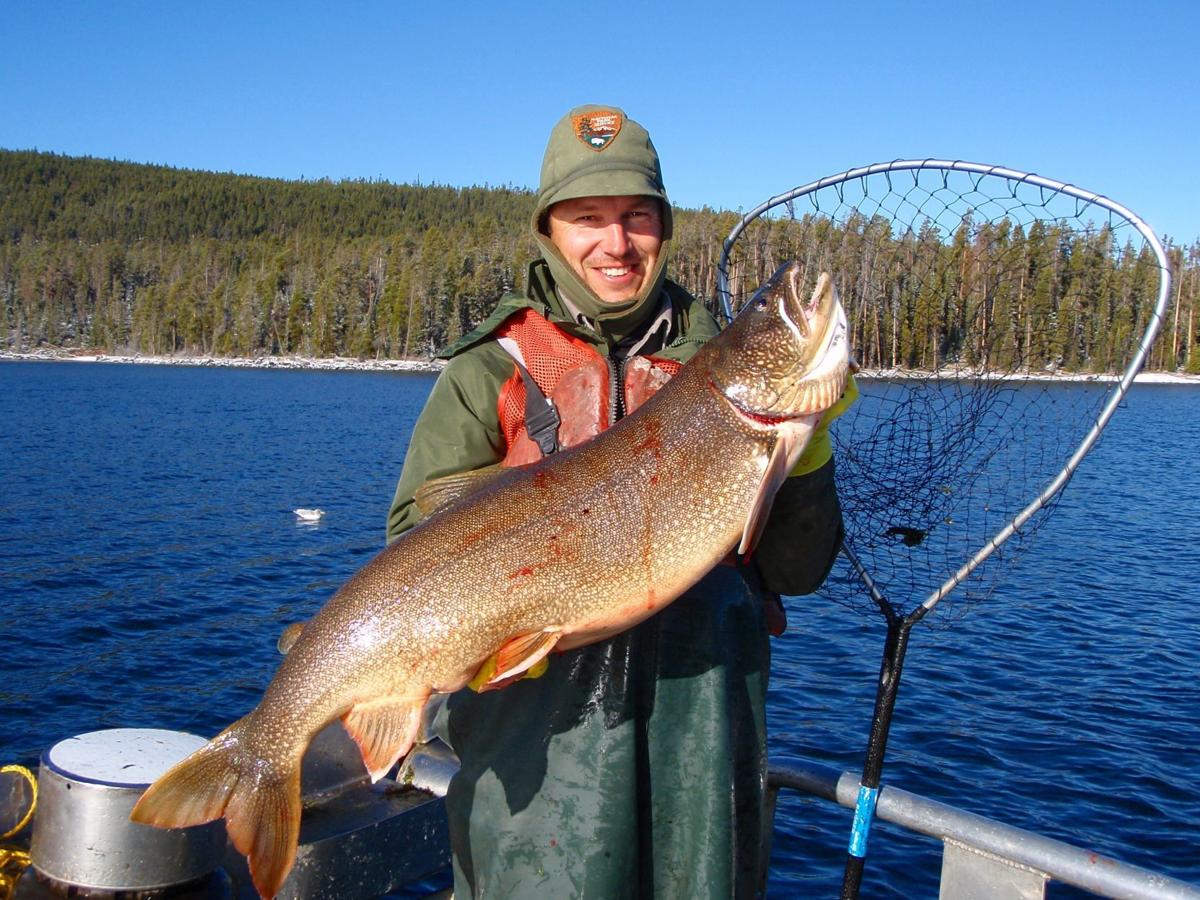 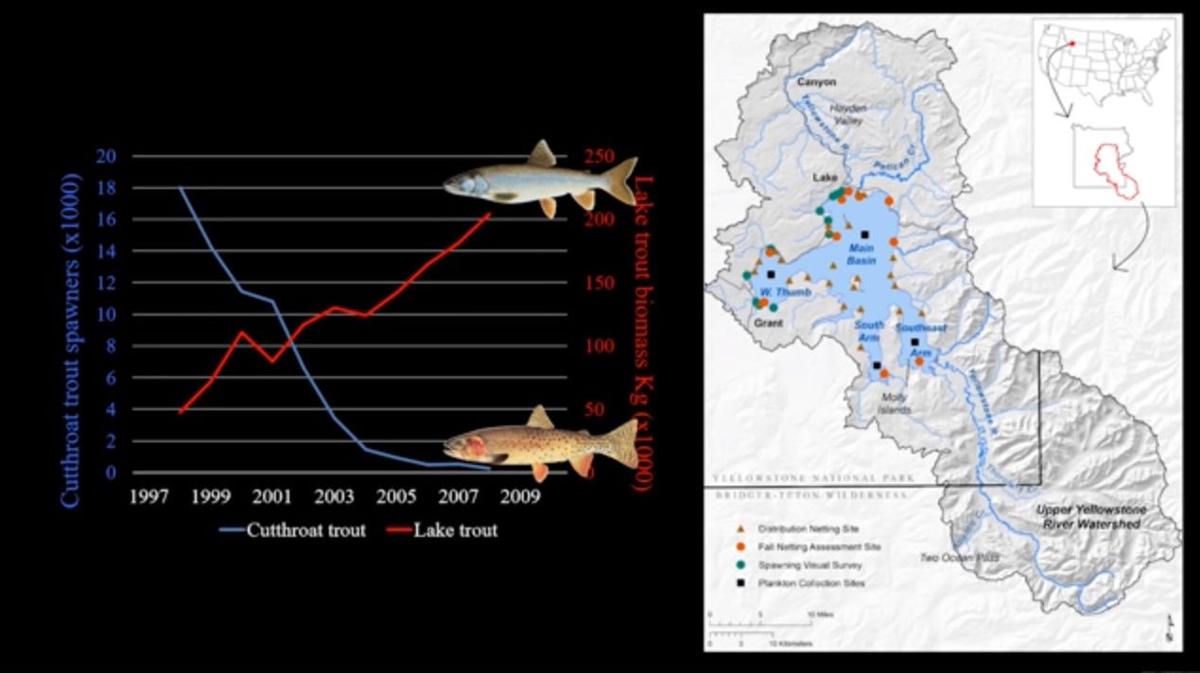 This graphic shows the lake trout surge in Yellowstone Lake as well as known and suspected spawning grounds.