Montana No. 2 in nation for wildlife vs. car collisions
Share this
1 of 2 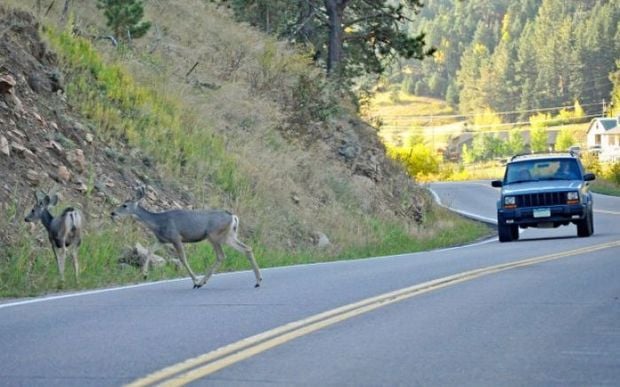 Montana ranked No. 2 in the nation for the number of vehicle versus large wildlife collisions. 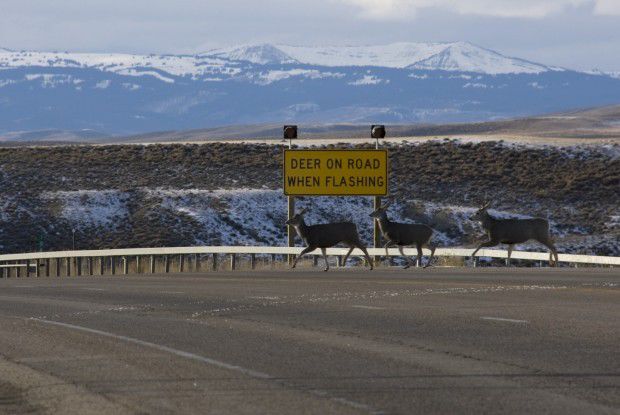 Wyoming moved into the top 10 for wildlife versus vehicle collisions this year.

Montana has the distinction of ranking No. 2 in the nation for auto versus deer, elk or moose collisions, according to a report by State Farm insurance company based on the number of claims filed.

State Farm calculated the odds at 1 in 58 that a Montana driver will collide with one of the large ungulates and file an insurance claim for damage. West Virginia took the top spot in the United States with a 1 in 41 chance of an auto striking a deer. Coming in third was Pennsylvania with a 1 in 67 chance.

“We know there is an increased risk of collision with deer around dawn and dusk, and also during the October-December breeding season,” said Chris Mullen, director of Technology Research at State Farm, in a press release. “However, drivers should be engaged, alert and on the lookout at all times, because you never know when you may need to react to a deer or any other obstacle that may suddenly be in your path.”

Montana has about 400,000 fewer licensed drivers than West Virginia.

The evidence is also found in the number of carcasses that MDT crews pick up along the state's highways. Between Jan. 1, 2010, and Dec. 31, 2014, more than 29,500 animals were picked up. The majority were taken from along Interstate 90, more than 4,000, followed by Highway 2 across the northern tier of the state and Highway 93 near Missoula. More than 21,000 white-tailed deer were counted in the tally.

The high number of such large wildlife killed on Montana roadways prompted a legislator to carry and pass a bill that took effect in 2013, allowing people to pick up the animals their autos have struck to try and save some of the meat for consumption. The roadkill law requires those folks to log on to a computer to acquire a permit for the meat. In the first year, more than 180 people claimed roadkill, based on the number of permits issued.

Some lawmakers and game wardens were worried that when the bill was passed it would encourage drivers to try and strike wildlife to claim the carcass. But even with a stout grill guard or bumper, Bob Barthel of Rocky Mountain Truck in Billings wouldn’t encourage such an act.

“Those grill guards can only take so much,” he said.

The company gets a lot of references from body shops after someone hits a deer and is looking to beef up their vehicle before another accident. The guards start at around $500 and go up, he said, much cheaper than replacing the front end of a car or truck if State Farm’s calculations are accurate.

In the Billings area, Highway 78 between Columbus and Absarokee, as well as Highway 212 between Laurel and Red Lodge are known for a high number of deer versus auto collisions. Both areas harbor plenty of white-tailed deer, the primary victims.

That prompted Stillwater Mining Co., which operates shuttles to its Nye-area mine, to equip its vehicles with stronger front-end protection, Barthel said.

The primary time of year that vehicles collide with wildlife are the months of November, October and December, all months when deer — especially bucks — are moving more during their annual mating season.

Here are some tips from State Farm about how to avoid collisions with wildlife:

How to build your own DIY air conditioner

Study: Dog owners are willing to risk their lives for their pets

Study: Dog owners are willing to risk their lives for their pets

Montana ranked No. 2 in the nation for the number of vehicle versus large wildlife collisions.

Wyoming moved into the top 10 for wildlife versus vehicle collisions this year.