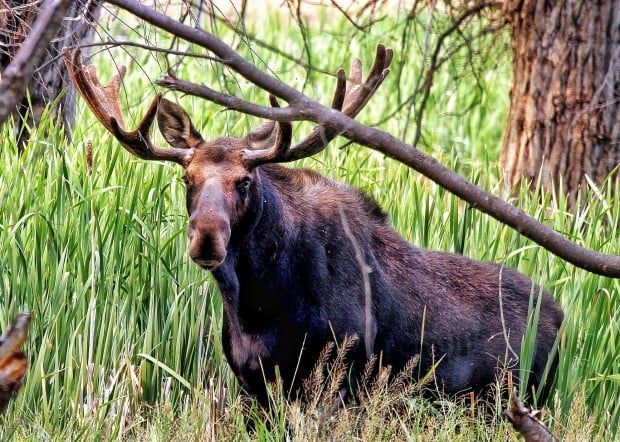 Moose populations are declining across the southern tier of their range, including the states of Wyoming, Montana and Idaho. Many factors may be at play. Researchers are studying the animals to try and learn more. 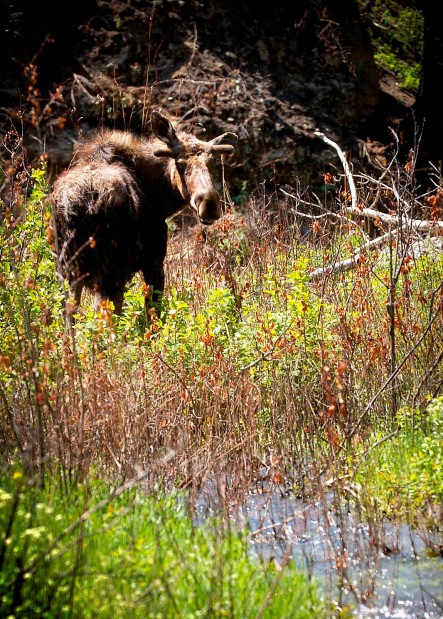 Montana will begin a long-term study of moose this year in three different regions of the state: the Big Hole, Cabinet Mountains and along the Rocky Mountain Front.

Bull moose shed their antlers every year. The moose has the largest antlers of any mammal.

In the past 30 years, the population of Shiras moose in northwestern Wyoming has declined, in some places precipitously.

Alarmed by the swift downturn, researchers have been studying the largest knobby-kneed member of the deer family to try to figure out what’s happening, looking at everything from parasites to predators, disease to habitat and birth rates. In conjunction, the Wyoming Game and Fish Department has considerably reduced its annual moose harvest in the region, no longer allowing cow moose hunting in the northwest and significantly limiting bull moose tags.

“The ’88 fires were not helpful for moose,” said Kevin Monteith, who works with the Cooperative Fish & Wildlife Research Unit in Laramie, Wyo., which has been involved in several moose studies in collaboration with the Wyoming Game and Fish Department. More than a third of Yellowstone National Park burned in 1988.

Loss of old-growth spruce-fir forests, where moose like to winter, could be a factor in the animals’ decline. Increases in the number of large predators, like grizzly bears, black bears and wolves, may also be contributing to the drop. But more recently the state is seeing the moose population fall in other regions where those factors aren’t at play. It has also become apparent that Wyoming may not be alone in seeing its moose population trending downward.

“Throughout the West, moose populations are declining in most herds,” Monteith said.

Nowhere in the lower 48 states has the decline in moose populations been worse than in Minnesota, which is home to the southernmost populations of Northwestern moose. Shiras moose, the ones found in Wyoming and Montana, are the smallest member of the moose family, with big bulls weighing just less than 1,000 pounds. Alaskan moose are the largest, standing more than 6 feet tall at the shoulder and weighing up to 1,200 pounds. Northwestern moose fall between Alaskan and Shiras moose in size.

One factor that may tie all of the life-threatening conditions together is warmer temperatures for an animal geared to cooler climates. With no sweat glands and a gut that has to ferment the moose’s woody diet of twigs, the animals have a hard time when temperatures reach more than 80 degrees.

Monteith said there may be “more broadscale potentially environmental factors at work” in the decline of Wyoming’s moose.

“As we’re seeing warmer temperatures in the spring, we are ending up with a shorter spring,” he said.

That hurts moose because the spring forage is some of the most nutritious for the animals because it is higher in protein. Although green forage may still be around after spring green-up, it’s not as nutritious, Monteith said.

The way a shorter spring affects moose populations is that if a cow moose isn’t getting enough nutrition, it’s less likely to give birth or may give birth to a calf that is less healthy.

Recent research is also pointing to another possible culprit affecting Wyoming’s moose population — parasites. A study published this year showed that about 50 percent of 168 moose that were killed during the 2009 hunting season were infected with Elaeophora schneideri, a worm that takes up residence in the animal’s arteries.

Although Wyoming researchers can’t make a direct link between infection in moose and the population decline, the state has noted that it’s worth further study.

Elaeophorosis infection is known, in some cases, to cause blindness, gangrene in the nose, antler and ear malformation and damage to the central nervous system. Mule deer and the West Coast’s black-tailed deer are a common host of the disease. White-tailed deer, bighorn sheep, elk and domestic sheep have also been documented as hosts. Horse flies spread the parasite to other animals after biting infected animals. Interestingly, the first documented case of the parasite in Montana was in a moose in 1972.

In a 1973-74 study, none of the 74 hunter-killed elk tested in Wyoming had signs of the parasite compared to three of five from southwestern Montana that were tested and found infected.

But that changed in 2000 when two Wyoming moose were killed after exhibiting abnormal behavior, then again in 2008 a moose was killed by Game and Fish officials — all were found to be infected with elaeophorosis.

“In Wyoming moose both the prevalence of infection and the parasite’s geographic extent appear to have undergone a recent, notable increase,” a 2011 study of the parasite said.

Montana has been slow to start its moose research because of a lack of funding and no strategic plan. That changed two months ago with the hiring of a full-time moose biologist, Rich Deceasre. He will be in charge of an eight- to 10-year study of moose in three areas — the Big Hole, Cabinet Mountains and along the Rocky Mountain Front. His position is being funded after one biologist retired and with a federal grant and matching dollars raised through the annual moose license auction.

The protocol for Deceasre’s study will be the same as that used in new research in Idaho, allowing for comparison of the data, said Ken McDonald, wildlife bureau chief for Montana Fish, Wildlife and Parks.

McDonald said Montana, too, is seeing a decline in its moose populations and a resulting drop in the number of moose hunting permits.

“We’re not quite sure what’s going on,” he said. “We’re seeing a range of things from climate change and warmer temperatures to parasites and predators.”

But he said the agency is unsure how those factors are affecting moose pregnancy rates or moose calf survival.

“We have a pretty good idea of where moose are and trends, but what’s driving that we really don’t have a good handle on,” McDonald said.

McDonald said Colorado is also gearing up for a moose study and Monteith said Utah has shown an interest in Wyoming’s work.

“Populations are rarely ever going to be stagnant,” Monteith said. “But evidence is piling up that we’re seeing declines across larger geographic areas.”

Pinpointing what is causing the declines in so many widely spread populations, however, is going to take a lot of research.

“The reality is, we’re right in the middle of working out a lot of questions,” Monteith said.

Orphan moose calves have a hard time surviving the winter, no matter how big they are, according to recently published research.

University of Montana professor Joel Berger studied moose calf survival in the Jackson Hole area of Wyoming several years ago. He measured the moose calves’ size by using a technique called photogrammetry, which allows researchers to estimate the animal’s body size through photographs based on the subject’s distance from the camera. The photographer must be within about 50 to 60 yards for the technique to work.

While larger animals typically have a survival advantage, the presence of a mother was more important in the moose Berger studied. The orphan moose were more likely to be harassed by other adult moose and were often forced from the best feeding areas. Berger also theorized that orphan moose have to expend more energy to survive since they don’t have a mother to do things like break a trail through deep snow or teach them where the best feeding sites are located.

Because of research like Berger’s, Wyoming no longer allows the shooting of a cow moose that has a calf at her side.

“In some circumstances, the shooting of mothers with young has been permitted under the assumption that calf survival is minimally affected,” Berger said. “Clearly, that is not the case.”

Overall, the survival of orphan calves was about eight times lower than those with mothers.

Berger said the use of photogrammetry can be used to assess the size of other animals being studied, an alternative to trapping and drugging larger animals for study.

“If we can do it by photography, it may be less risky to the animals, but it could also be more dangerous to humans walking up close to animals like a cow moose,” he said.

Moose in Washington appear to be bucking the decline that's plaguing the animals across most of the lower 48 states, a Washington Fish and Wil…

Moose populations are declining across the southern tier of their range, including the states of Wyoming, Montana and Idaho. Many factors may be at play. Researchers are studying the animals to try and learn more.

Montana will begin a long-term study of moose this year in three different regions of the state: the Big Hole, Cabinet Mountains and along the Rocky Mountain Front.

Bull moose shed their antlers every year. The moose has the largest antlers of any mammal.