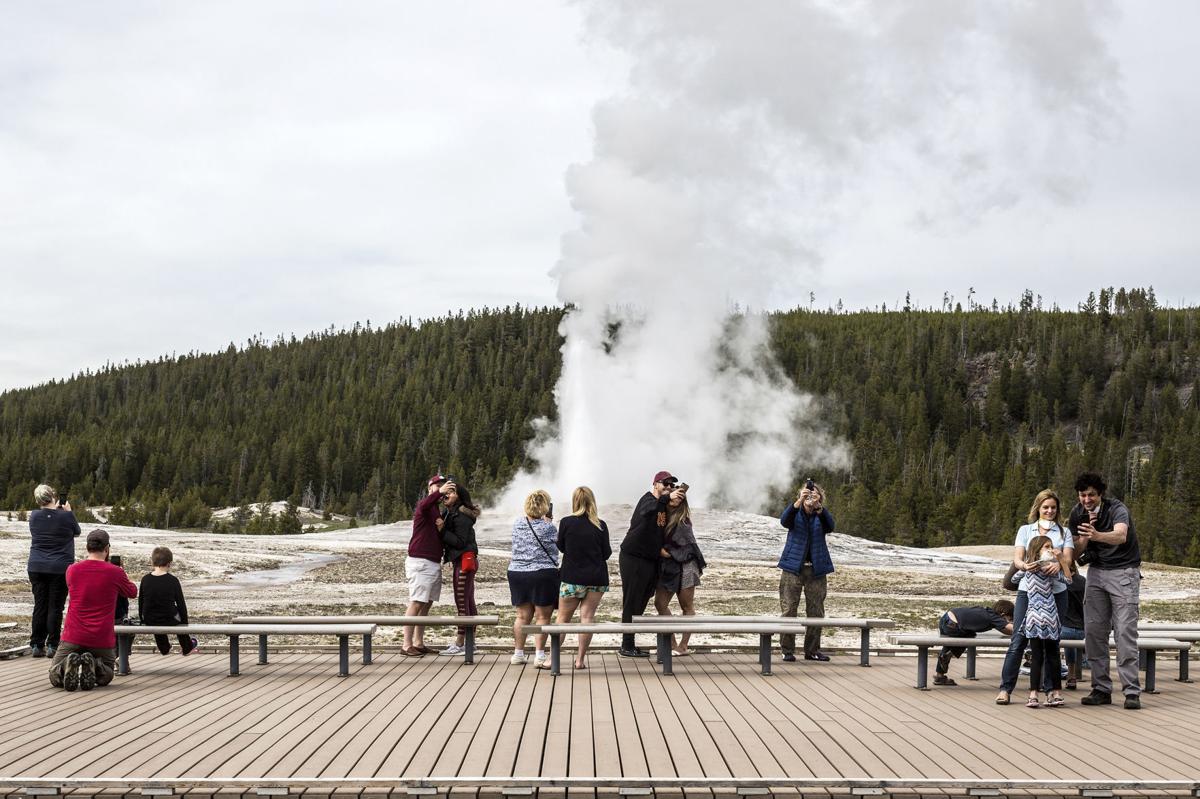 In this Monday, May 18 photo, visitors watch as Old Faithful erupts on the day the park partially reopened after a two-month shutdown due to the coronavirus pandemic, at Yellowstone National Park, Wyo. Officials at Yellowstone and other national parks plan to let tourists mostly police themselves and not intervene much to enforce social distancing. 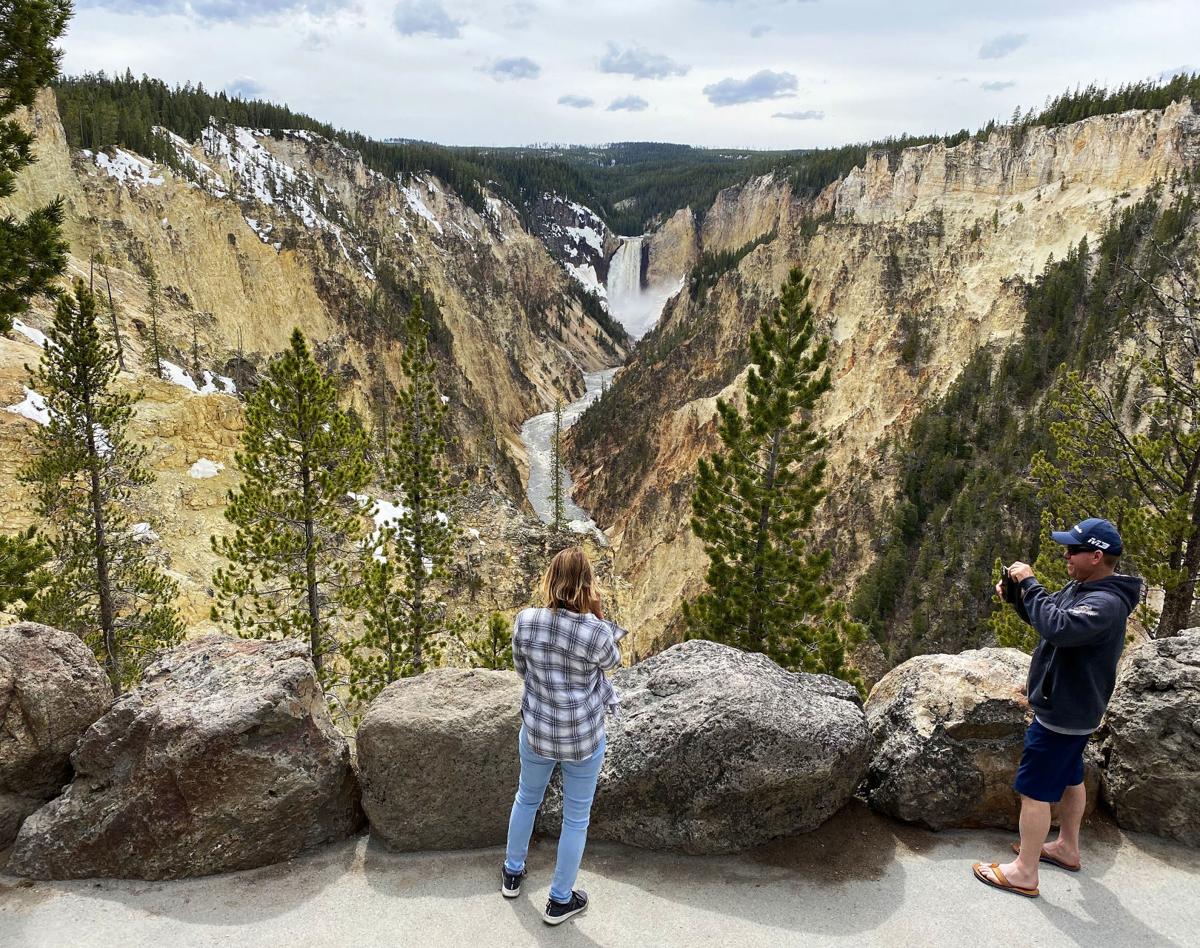 Matt Gibbens, at right, takes photos while visiting Artist's Point overlook of the Lower Yellowstone Falls on Monday, May 18. 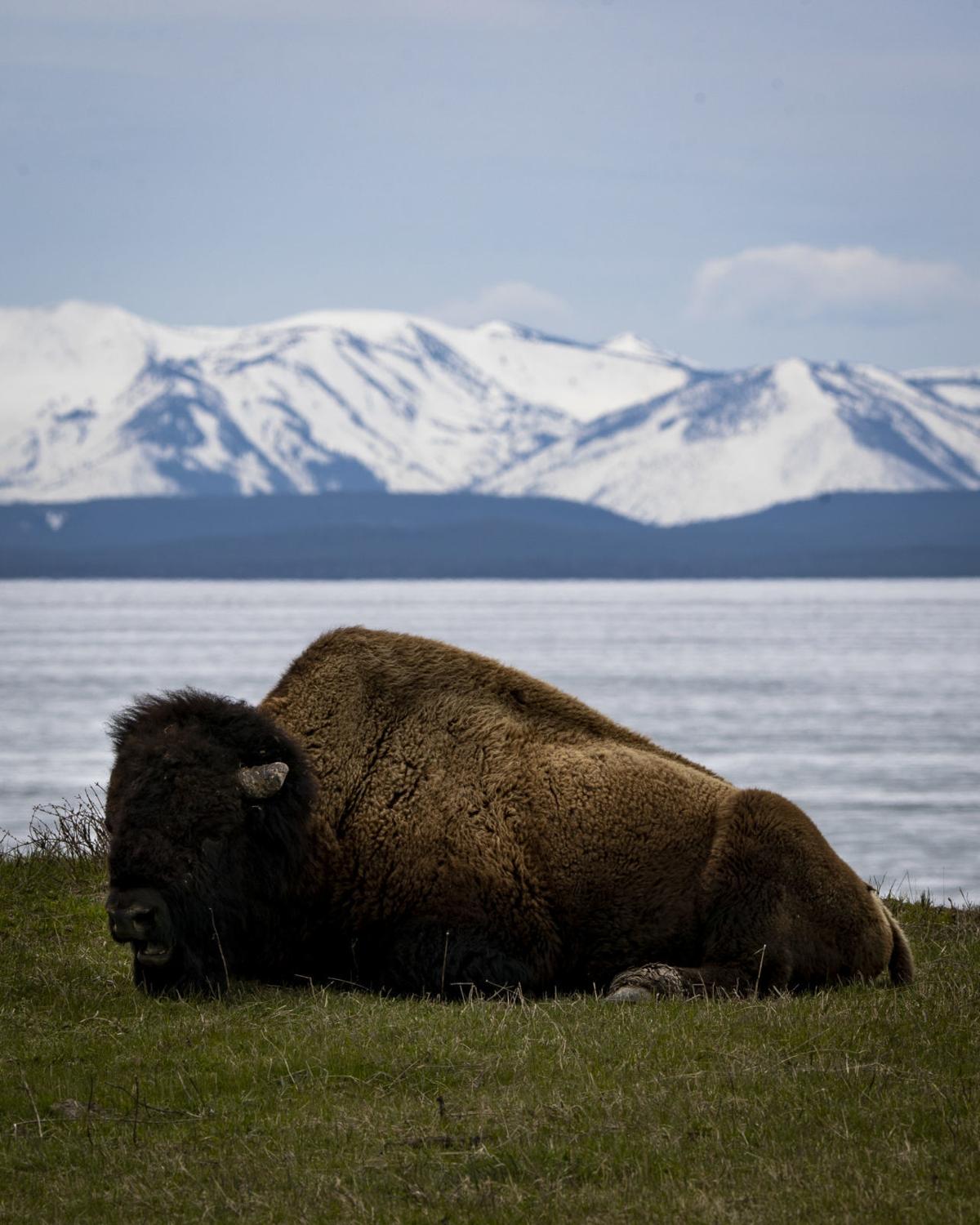 A bison sits along Yellowstone Lake in Yellowstone National Park on the first day the park was open since being closed due to the coronavirus.

A man pets a wild bison on the head. Rescuers pull a treasure seeker from a snowy canyon. A woman taking photos stumbles into scalding water.

Visitors to Yellowstone National Park often leave common sense and situational awareness at home, as those examples in the past year show.

But it's unclear if tourists will comply or if popular parks known for drawing large crowds will become hot spots.

Memorial Day weekend typically signals the start of the summer tourist season in national parks, when crowds gather shoulder to shoulder at popular scenic spots such as Old Faithful to witness the wonder of a geyser erupting.

As with nature’s many other dangers, which in Yellowstone range from sunburn to charging grizzly bears, park officials plan to let the public mostly police itself against disease.

“We can’t keep the public away from bison and bears every year at full staffing levels. So the notion that we’re going to keep every human being 6 feet apart is ridiculous,” Yellowstone Superintendent Cam Sholly said.

Yellowstone, which partially reopened on Monday, has spent $135,000 in recent weeks on sanitizing equipment, finding personal protective gear, modifying boardwalks to spread out foot traffic near thermal features, and posting a “massive amount of signage” to promote hygiene and social distancing.

But Sholly said he has no intention of putting his employees at risk by breaking up every ill-advised crowd.

“It’s an easy choice, actually," he said. “That doesn’t mean we’re not managing it. We’re out there.”

Other national parks that have reopened include Great Smoky Mountains in Tennessee and North Carolina, where park officials urge visitors to arrive early at popular spots.

“There is plenty of space for visitors to spread out," park spokesperson Dana Soehn said. "But where they aren’t, we’re not asking our volunteers and employees to enforce it.”

At Arizona's Grand Canyon, officials are leaning on an unenforced overnight closure to thin out visitor numbers but not limiting access to the canyon's cliff-hugging trails.

“We're expecting there to be less people on the trails than being open all day,” said Grand Canyon spokesperson Lily Daniels. “A lot of it is self-governance.”

“It simply defies logic and human behavior to think that people who have traveled long distances to see the canyon will not park and stand in clusters at popular overlooks, or traverse the same trails, bringing them in close contact to each other,” Arnberger wrote.

Interior Secretary David Bernhardt, whose oversight includes the National Park Service, will make his thoughts on the matter clear enough: Bernhardt planned to visit the Grand Canyon on Saturday to highlight its reopening.

Zion National Park in southern Utah has partially reopened but shuttle service that helped to reduce car traffic remains shut down, sometimes forcing the entrance to close after parking lots fill up.

Wider use of timed entry, which requires visitors to buy tickets to enter some smaller National Park Service sites at a certain time, could help parks manage crowds during the coronavirus, suggested Kristen Brengel, vice president of government affairs for the National Parks Conservation Association in Washington, D.C.

“A timed entry system could really work to make sure people are spacing out a little more,” Brengel said.

For now, only the southern half of Yellowstone is accessible through two entrances in Wyoming. The park opened to daytime use Monday and if all goes well, three other entrances in Montana and the rest of the park — including campgrounds, cabins, stores, restaurants and possibly its grand old lodges — will reopen in phases over the summer.

If too many coronavirus cases associated with the park emerge, Yellowstone can shut down again. The park is working with health officials to coordinate plans and test employees for COVID-19 — with plans to even check for the virus' biological signature in park sewage systems.

“No one’s an expert at reopening national parks in a pandemic,” Sholly said.

For most people, the new coronavirus causes mild or moderate symptoms, such as fever and cough that clear up in two to three weeks. For some, especially older adults and people with existing health problems, it can cause more severe illness, including pneumonia and death.

Early indications of the public taking personal responsibility in Yellowstone aren't encouraging. The photo-taking woman who stumbled into scalding water wasn't even supposed to be in the park — she had sneaked in May 12, six days before the park reopened.

On Wednesday, two days after Yellowstone reopened, a bison knocked over and hurt a woman near Old Faithful.

As has happened in several similar incidents in recent years, the woman got too close to the animal, park officials said.

Grizzly 399 was seen Monday pacing about 100 yards off the road along the banks of Pilgrim Creek, trying to find a safe spot for her brood of youngsters to ford.

With no fanfare or even much public notice, Yellowstone National Park has opened its North Entrance at Gardiner to motorists traveling to Silv…

Yellowstone fishing season opens May 23; no licenses available in park

The fishing season opened on Saturday in Yellowstone National Park, but anglers will have to purchase their licenses at stores outside the park.

A female visitor was knocked to the ground and injured by a bison in the Old Faithful Upper Geyser Basin after approaching the animal too closely.

A third person has died in Yellowstone County from COVID-19, according to RiverStone Health, the county’s public health department. It is Montana's 17th death from the virus.

Two of Wyoming’s Yellowstone National Park gateway communities are budgeting for a drop in sales tax revenues of between 20 percent and 50 percent for the fiscal year beginning in July, underscoring the uncertainty facing pandemic-plagued tourism revenues.

In this Monday, May 18 photo, visitors watch as Old Faithful erupts on the day the park partially reopened after a two-month shutdown due to the coronavirus pandemic, at Yellowstone National Park, Wyo. Officials at Yellowstone and other national parks plan to let tourists mostly police themselves and not intervene much to enforce social distancing.

Matt Gibbens, at right, takes photos while visiting Artist's Point overlook of the Lower Yellowstone Falls on Monday, May 18.

A bison sits along Yellowstone Lake in Yellowstone National Park on the first day the park was open since being closed due to the coronavirus.