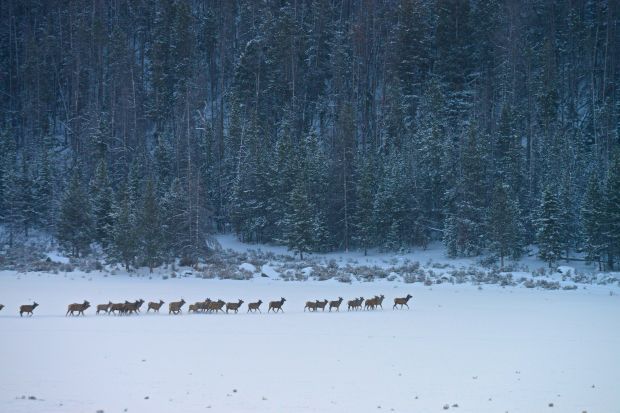 Elk move through a meadow outside of Cody, Wyo. Researchers are studying the Cody elk herd to better understand where and when it moves and how the herd impacts the rest of the Greater Yellowstone Ecosystem. 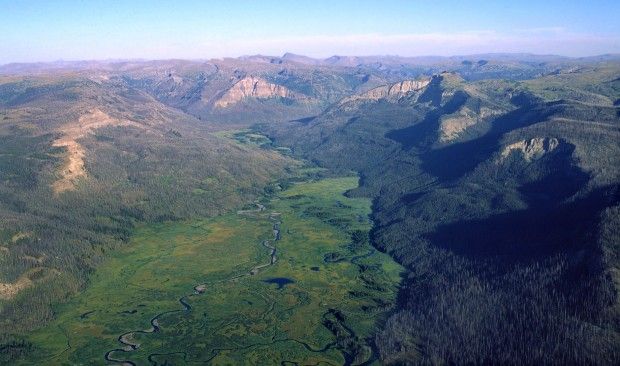 The Thorofare Valley in Wyoming is the most remote location in the lower 48 states and the place that many elk from the Cody herd migrate to each summer. 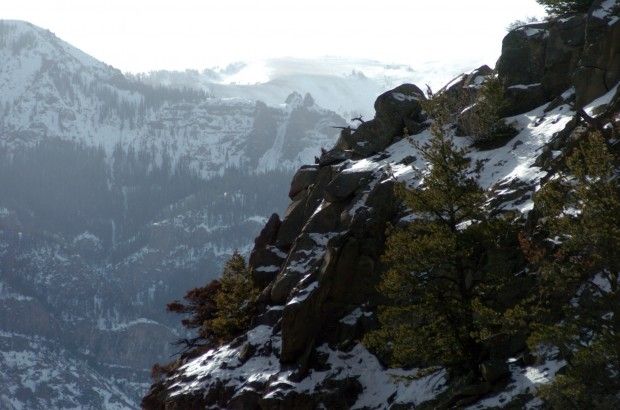 Steep mountains surround the South Fork of the Shoshone River. The valley and its tributaries provide habitat for a large herd of migrating elk currently being studied.

After logging 800 miles in eight months in the Yellowstone backcountry last year, photographer Joe Riis has a much greater respect for the Cody elk herd he was tracking, the country they inhabit and the difficulty of moving through the remote mountainous region.

“At the beginning of the project I was expecting to be able to figure out the mountains, fill up my backpack and do it on my own,” he said in a recent telephone interview from his South Dakota home.

Realizing he needed help, Riis turned to six Cody, Wyo.-area outfitters to glean knowledge about the terrain, trails and how to get around. By November he had become a fairly knowledgeable horseman with a great respect for the wisdom and comforts provided by outfitters like Lee Livingston.

“Joe has turned into a hell of a hand,” Livingston said. “He couldn’t ride a horse when he started, and by the end he was saddling his own horse and loading his gear.”

Riis is even thinking a mule might be a good investment for future treks.

“In that backcountry stuff, you can’t get in there any other way,” he said.

Riis often ventured into the vast, wild territory of northwest Wyoming with Arthur Middleton. Together they have completed the first year of a two- to three-year study dubbed the Greater Yellowstone Elk Migration Project.

Middleton is an ecologist at the Yale School of Forestry and Environmental Studies and is also a research associate with the Wyoming Migration Initiative at the University of Wyoming. A University of Wyoming graduate, Riis is a National Geographic photographer who has collaborated on Wyoming migration studies examining mule deer and pronghorn.

“Our first major task this year was to start aggregating all the existing information on the elk migrations,” Middleton wrote in an email update on the project.

“This database of GPS movements will facilitate comprehensive reporting on the migrations, new study of climatic influences on migration behavior, and improved long-term monitoring and conservation of migratory populations and habitats,” Middleton wrote.

To fill in the gaps in the Greater Yellowstone Ecosystem elk migration data, this past year Riis and Middleton focused their study on the Cody elk herd, which winters near the town for which it is named. The herd numbers between 5,000 and 5,500, according to Tim Woolley, of the Wyoming Game and Fish Department.

“In March 2014, we collared 30 cow elk in the Cody herd, on Greybull, South Fork, and North Fork winter ranges near Cody,” Middleton wrote.

“In March 2015, we will deploy additional collars in the Wiggins Fork herd outside Dubois, Wyo. These efforts will allow us to provide the first complete picture of the (Greater Yellowstone Ecosystem) elk migrations.”

Those Cody elk that do migrate manage to trek 25 to 85 miles through steep, rocky drainages over high mountain passes to reach the upper Snake River drainage as well as Yellowstone National Park’s southeastern Thorofare Valley — the most remote region in the lower 48 states.

“They make it through some pretty rough country,” Woolley said.

Riis’ main role in the study is to photograph and video the migrating elk so people see the difficulty and grandeur of their journeys. To make the shots look natural he uses long lenses and six to seven camera traps, which take candid shots like a hunter’s trail camera.

“I’m interested in elk that are migrating, going over these massive passes,” he said. “My goal is to show how incredible this migration is.”

Taking good photos of the Cody elk herd was proving more difficult than Riis’ previous work because none of the elk migration route was accessible from a nearby road. Some of the camera traps were 30 miles from the trailhead.

The elk also move in smaller groups than mule deer and antelope when they migrate, Riis said, producing an almost constant flow of animals. Wyoming’s pronghorns, on the other hand, group up and move en masse in a couple of days.

Along with the photographs of elk, Riis is also compiling shots of the Cody-area outfitters that have helped him for a 2016 exhibit at the Buffalo Bill Center of the West.

“It’s been really rewarding for me just getting to know some of those people,” Riis said. “It’s a little bit of a dying thing.

“Next fall I’ll go on some more hunts and spend some time on different ranches that house these elk in the winter to show the importance of these people who live with elk, while also making a living off the land, too,” Riis said.

Riis has traveled in remote, difficult country before. He twice spent five weeks in Mongolia as part of a Gobi bear research team and worked for two months in the Venezuelan jungle on a frog project. Yet the Yellowstone country still proved challenging.

“It’s as wild as it gets,” he said. “The Absaroka Range is equal to or wilder than some of Mongolia and Alaska.

“It’s one of those places where it is really difficult to go it alone,” he added.

Each spring, a herd of mule deer leaves the Red Desert and follows a trail of greening grass and retreating snow along the western slope of th…

LARAMIE, Wyo. — If photographer and University of Wyoming graduate Joe Riis spends a month working on a photo assignment and walks away with o…

CODY, Wyo. — When the Prince of Monaco came to town on Thursday, there were a number of people under pressure — everyone from the cooks and wa…

The toughest deer in the West are found wintering outside of Cody, Wyoming.

Elk move through a meadow outside of Cody, Wyo. Researchers are studying the Cody elk herd to better understand where and when it moves and how the herd impacts the rest of the Greater Yellowstone Ecosystem.

The Thorofare Valley in Wyoming is the most remote location in the lower 48 states and the place that many elk from the Cody herd migrate to each summer.

Steep mountains surround the South Fork of the Shoshone River. The valley and its tributaries provide habitat for a large herd of migrating elk currently being studied.