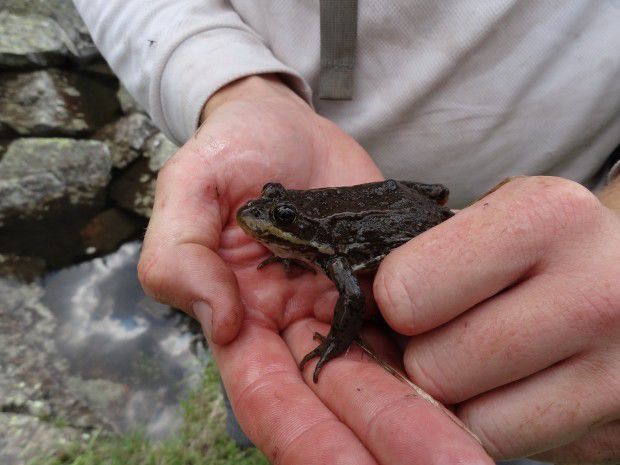 A Columbia spotted frog, Rana lutieventris, is one of the two species of frogs found in the Absaroka-Beartooth Wilderness. This one was captured near Star Lake in the East Rosebud drainage in late June. 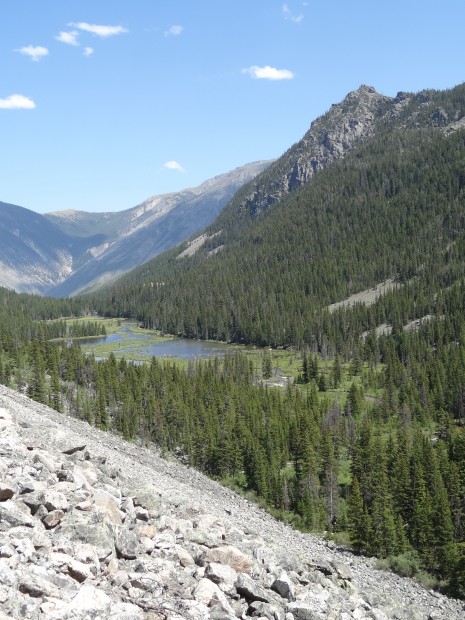 Rocky Mountain College student Bo Walker spent much of his summer exploring the Absaroka-Beartooth Wilderness lakes, like Slough Lake, as part of his research into whether fish presence affects the number of amphibians in a lake.

For two months this summer, Bo Walker had something of a Huck Finn existence.

“This is why a bunch of my friends called me a lazy bum,” he told a small gathering at the Audubon Conservation Education Center on Tuesday.

Walker’s hiking and fishing was actually in pursuit of scientific knowledge. He was gathering information for his independent research project, an undergraduate thesis examining what effect the introduction of trout to lakes in the Beartooth and Absaroka mountains may have had on amphibian populations.

It would seem that the A-B Wilderness is the perfect place to search for frogs. Hundreds of lakes dot the landscape at elevations ranging from 5,000 to 11,000 feet. Fish were planted in the lakes in the early 1900s – everything from rainbow to brook and Yellowstone cutthroat trout. The idea at the time was to provide fisheries for horsepackers and hunters who ventured into the rugged region. There were few backpackers back then.

Of 1,000-some lakes in the wilderness, more than 340 have been stocked with fish. Out of all those lakes, only two held native fish, Walker said.

He came up with the idea for his study while working for Fish, Wildlife and Parks on its mountain lakes crew in the A-B Wilderness two years ago. The crew annually assesses a portion of the lakes that have been stocked with fish and plants fish in some of the waters.

As Walker worked with FWP he began to wonder: “What are we doing to the landscape if we’re stocking nonnatives?”

“That’s one of the questions that fueled me in this study,” he said.

The Absaroka and Beartooth mountains are home to two main species of frogs: the Columbia spotted frog, which tends to live at 3,500 feet elevation and higher, and the boreal forest frog. Both species can be found in waters as high as 9,500 feet in the A-B.

The frogs provide food for a variety of species. Besides fish, they are also on the menu for ducks, herons, otters, snakes and even other frogs. The frogs tend to also eat what fish do – mainly aquatic insects. So fish and frogs compete for the same foods where they are found together.

So what makes a place frog-friendly? Water is a must, but frogs also generally like to breed in shallow, warm waters where there is emergent vegetation. Sometimes, to find just the right place to live or breed, the frogs will migrate. They can travel up to 2 kilometers, or about a mile-and-a-quarter, sometimes covering up to 500 meters in a day.

“Which, when you consider they’re about the size of your fist or smaller, that’s pretty impressive,” Walker said.

Without researching the subject, it would seem logical that since frogs are fish food, amphibian numbers would be much lower in lakes where trout have been stocked. But that’s not what Walker found in the 50 lakes he examined — 22 of which had fish and 28 didn't.

The problem, Walker said, is that to make the data statistically valid he needed to investigate 50 lakes with fish and 50 without, instead of 50 lakes total. To do that, he would have needed another him and more funding.

Despite his research, Walker said, scientific literature is full of studies that say “Fish do affect amphibians.”

But his study can’t say that fish are affecting frogs significantly. And there are a lot of other factors that could have skewed his one-time sample, everything from the dry, warm summer, to a milder winter that may have increased frogs’ overwinter survival. Ideally, Walker would like to persuade FWP to remove fish from a series of lakes to see if frog numbers rise in those waters.

“It’s important to keep frogs because they are part of the natural community,” Walker said. “What the ripple effects are of a species’ disappearance is not known.

“We should be good ecological stewards.”

The most miles Bo Walker traveled in a day during his two months in the Absaroka-Beartooth Wilderness was 20. The most distance he covered in a week was 100 miles. Overall, he averaged about 12 to 14 miles of hiking in a day.

To sample whether a lake had fish, he used a fly rod. The favored attractant to tie onto the end of the fly line was any grasshopper-like imitation.

Eating soup can help with weight loss when considering these tips

Eating soup can help with weight loss when considering these tips

How to set goals for personal growth and development

How to set goals for personal growth and development

A Columbia spotted frog, Rana lutieventris, is one of the two species of frogs found in the Absaroka-Beartooth Wilderness. This one was captured near Star Lake in the East Rosebud drainage in late June.

Rocky Mountain College student Bo Walker spent much of his summer exploring the Absaroka-Beartooth Wilderness lakes, like Slough Lake, as part of his research into whether fish presence affects the number of amphibians in a lake.