This historic story is being published in two parts. The first part can be found here.

After being shot three times by Nez Perce warriors and left for dead in Yellowstone National Park in August 1877, George Cowan's next decision seems unusual, maybe the result of delirium, although some modern tourists may relate to his craving.

“It occurred to me that I had spilled some coffee when in camp, on Thursday in the Lower Geyser Basin, and calling my dog we started for it, I crawling as before, and the dog walking by my side,” Cowan later recounted in Frank Carpenter’s 1878 book, “The Wonders of Geyser Land.” “The coffee was four miles distant, but I thought not of that. The only idea was to possess the coffee. I was starving.”

Fortified by a boiled cup of coffee that he made in a leftover tin can, his “first refreshment” in “five days and nights,” the 35-year-old Cowan began crawling again. This time possibly fording the Firehole River on his stomach before passing out near the bank, weary from his tortured travels, blood loss and the pain of his wounds.

“I was now exhausted and could go no farther,” Cowan later wrote. “It was an expiring effort, and having accomplished it I gave myself up for dead.”

It was there, along a road into the park, that two of Gen. Oliver Howard’s scouts trailing the Nez Perce found the Radersburg lawyer near death.

The scouts built a fire, made some coffee for the injured man and gave him a blanket and hard tack, leaving him alone to await the trailing troops’ arrival the next day.

“After they were gone and I had eaten, my desire for life returned, and it seems the spirit of revenge took complete possession of me. I knew that I would live and I took a solemn vow that I would devote the rest of my life to killing Indians, especially Nez Perce.”

Unfortunately for Cowan, his bad luck was not over. He awoke during the night to find the campfire had spread across the ground surrounding him in fire, according to historian Elizabeth Watry, author of the book “Women in Wonderland” which recounts the Cowans’ trip. Now in addition to gunshot wounds and the scrapes and bruises from crawling, burns were added to Cowan’s list of injuries.

The tale of the Nez Perce’s travels, encounters with whites and skirmishes provided sensational stories for the region’s newspapers that summer. Stories about the capture of the Radersburg Party were even more tantalizing.

Before knowledge that many of the group had survived, the Helena Herald wrote in its Aug. 30, 1877, edition about “The national park massacre” of 10 Helena men camping above Yellowstone Falls at about the same time.

“Not in the history of Helena — and it has been an eventful one — have we ever seen such crushing, staggering grief overwhelm our people as on the reception of the news of the massacre of nearly the entire party who left us a few days ago in high spirits for a pleasure excursion in the National Park.”

“Everyone was panicking throughout this region,” Yellowstone historian Alicia Murphy said.

The newspaper account is riddled with questions about whether dispatches from so far away could be hearsay or actual accounts of what happened, yet it still goes on to eulogize.

“If these men had fallen in battle as did those in the Big Hole fight, there would have been a different feeling in contemplating their fall. We expect some to fall in battle, and we know that death on the battle-field is not without its charm to a brave man, but it aggravates our regrets to think of the lives wantonly taken without warning to avenge offences (sic) committed by others hundreds of miles away.”

In the final accounting, two of the 10 Helena men were killed by Nez Perce raiding parties; two others were injured.

“They had a pretty rough time, too,” Murphy said.

A Sept. 7, 1877, account from the New North-West newspaper in Deer Lodge provided updates on the Radersburg and Helena tourists, noting that, “Fortunately the casualties have been greatly reduced by late reports but the adventures and perils of those little parties have been as thrilling and wonderful as ever made up a chapter of border experiences.”

Howard’s troops would eventually reach Cowan. The Army had also found two of the Radersburg Party who had escaped — A.J Arnold and Albert Oldham, the camper who had been shot in the face. The Army surgeon and friends treated the Cowan's wounds. The flattened bullet pulled from his head later graced his watch fob as a memento of a second anniversary and summer trip to Yellowstone that would never be forgotten.

“What an adventure that was,” said Murphy, the Yellowstone historian.

Cowen saddled up with Howard’s troops before breaking off to detour to Mammoth Hot Springs with Arnold and Oldham. After being freed, Emma, her brother and sister had found Army troops camped near Tower Junction. The detachment escorted them back to Mammoth and then on to Fort Ellis near Bozeman. While awaiting news of her husband, Emma returned to her parents’ home near Townsend.

When Emma read in the newspaper that her husband was still alive she traveled to Bozeman, only to find out Cowan was resting and in poor health at a ranch along the Yellowstone River in the Paradise Valley. Renting a carriage and driver she rode from Bozeman to the ranch. Three weeks after being found alive Cowan was finally reunited with his wife in late-September.

As Watry writes in her book, Cowan’s misfortunes were still not over. On the trip back to Bozeman in the carriage, the carriage broke and the team of horses spooked. Luckily, the travelers were thrown clear of the wagon before it tumbled down a cliff. After arriving at a Bozeman hotel, Arnold sat down on Cowan’s bed to treat his re-opened wounds and the bed collapsed.

“Had I been morbidly inclined,” Emma later commented, “I might have conceived the idea that some avenging Nemesis was following in his foot-steps, which nothing but the forfeit of his life would satisfy.”

In the end it would be a rugged 126-day, 1,200-mile journey for the Indians through the Rocky Mountains, eventually ending violently on Montana’s eastern plains in October. At that time the remnants of the original band of fleeing Nez Perce surrendered to the U.S. Army near present-day Havre, although a small band escaped to Canada. The captives were shipped on rail cars to Fort Leavenworth, Kansas, that winter and then on to Indian Territory in Oklahoma where many died of disease. It would be seven years before tribal members were moved to the Colville Reservation in Washington.

In 1986 Congress created the 1,170 mile-long Nez Perce National Historic Trail. About 84 miles of that route wends through Yellowstone National Park.

In 1901 George and Emma Cowan revisited Yellowstone National Park and the sites where their traumatic experiences had taken place four years earlier, tourists once again, but this time without the drama they had suffered in 1877.

Amazingly and despite his injuries, George Cowan walked again and lived to the age of 84, dying from pneumonia in 1926, Watry wrote. Emma lived another 12 years after her husband’s death, dying in 1938 at the age of 85.

Considering the many bad turns Cowan’s trip took, historian Elizabeth Watry said it was almost like a “Keystone Cop comedy of errors,” referring to the silent film policemen known for their blunders.

In her many examinations of Yellowstone history, Watry hesitated to call Cowan the most ill-fated of tourists ever to visit the park. Stagecoach accidents, Truman Everts’ lost wanderings for 37 days in 1870, tourist maulings by grizzly bears and the scalding of tourists in hot springs sprang to mind of other tragedies. But Cowan’s series of unfortunate events were one of the few to involve American Indians, to extend over several days and to contain such “high drama.”

“This is probably the most dramatic story of Yellowstone,” Watry conceded.

Watch Now: How to tell the difference between antlers and horns

Home renovation must-do’s to add value to your home

Home renovation must-do’s to add value to your home

BRIDGER — In the dry sagebrush foothills west of here, sheltered in the rain shadow of the imposing Beartooth Mountains, lives an unusual bit of Pennsylvania history — 35 descendants of the McCleery buffalo wolves.

Where the buffalo roam, Montana cowboys dig in their heels

MALTA – Cowboys and bison live on both sides of the Missouri River, but the gulf between them yawns as wide as the Missouri Breaks.

Yellowstone Caldera Chronicles is a weekly column written by scientists and collaborators of the Yellowstone Volcano Observatory. This week's contribution is from Ken Sims, professor of Geology and Geophysics at the University of Wyoming.

Montana generous in sharing men, women and treasures to hasten end of WWI

They’re not forget-me-nots, but they could be called that.

The National Park Service, faced with overflowing garbage and toilets as the government shutdown enters its third week, plans to tap entrance fees to pay for expanded operations at its most popular sites, the Washington Post reported Sunday.

BOZEMAN — As the sun rose over the Lamar Valley in Yellowstone National Park, Linda Carney bent over a toilet, windshield scraper in hand. 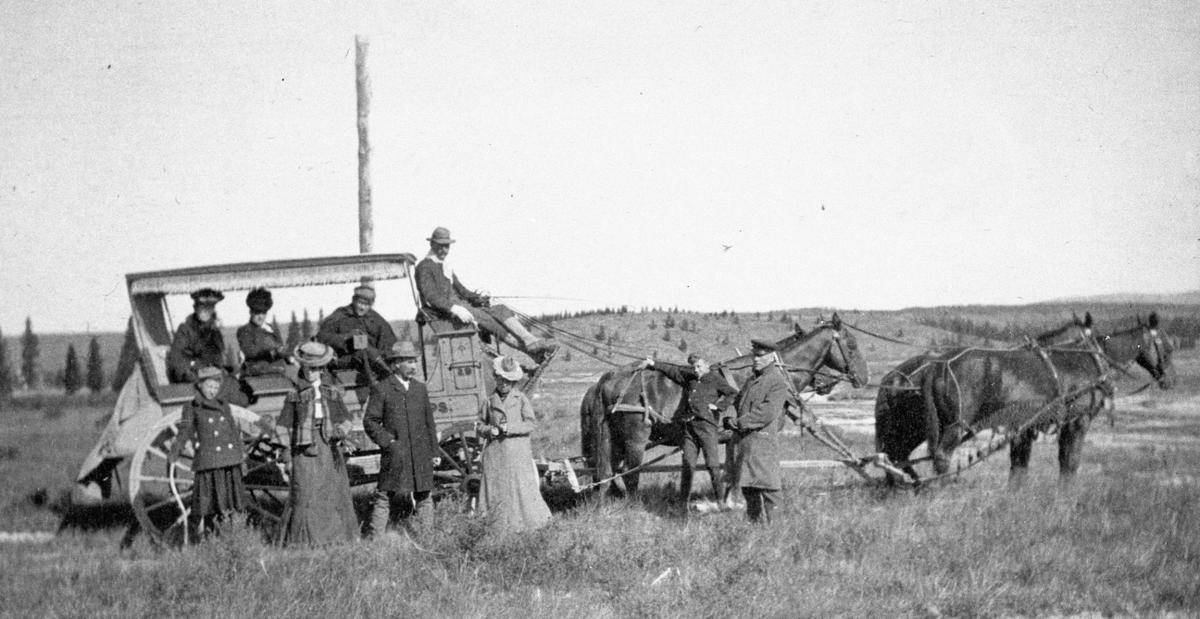 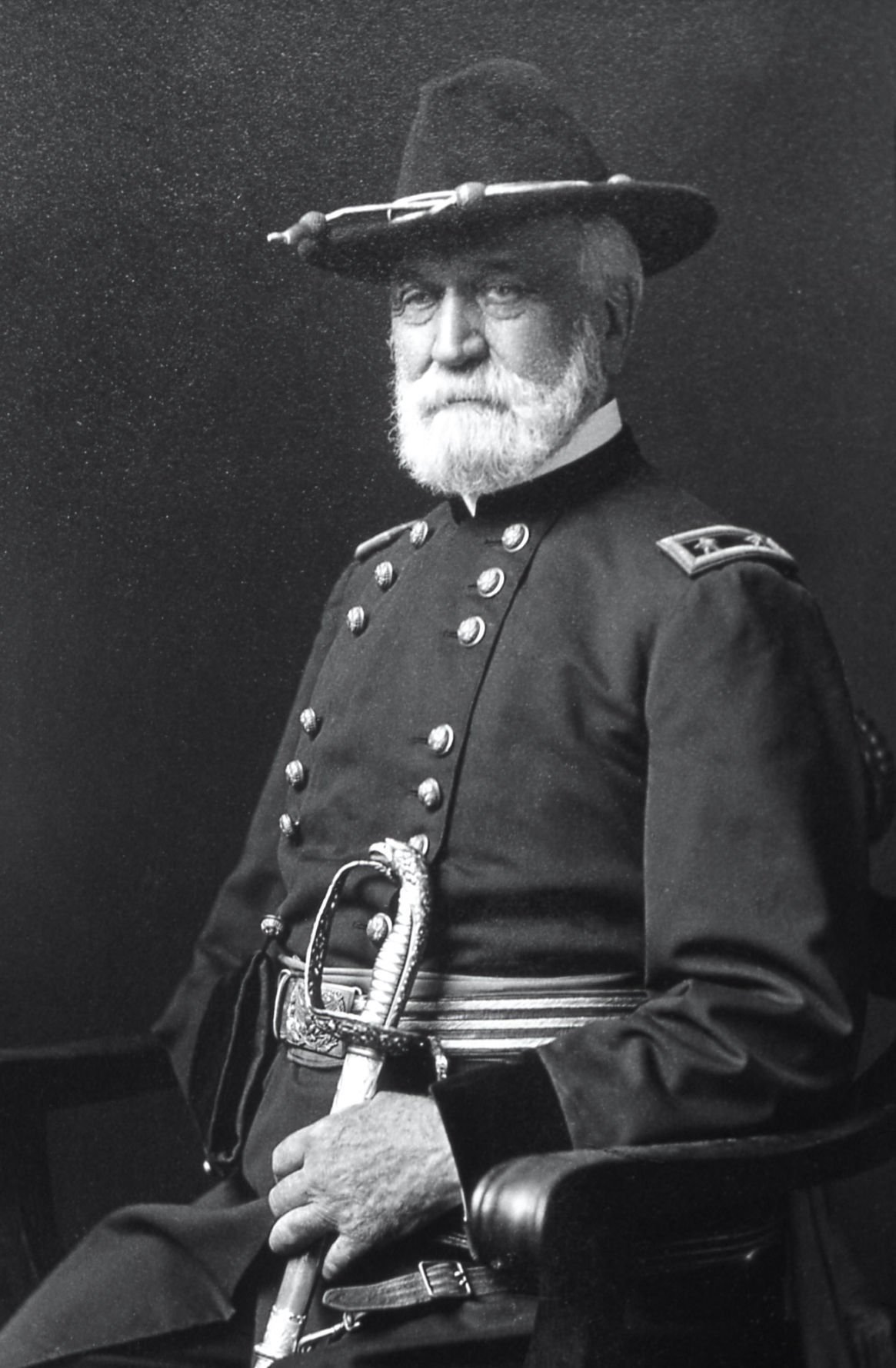 General Oliver Otis Howard pursued the Nez Perce Indians across Yellowstone in 1877. This photo was taken around 1910. 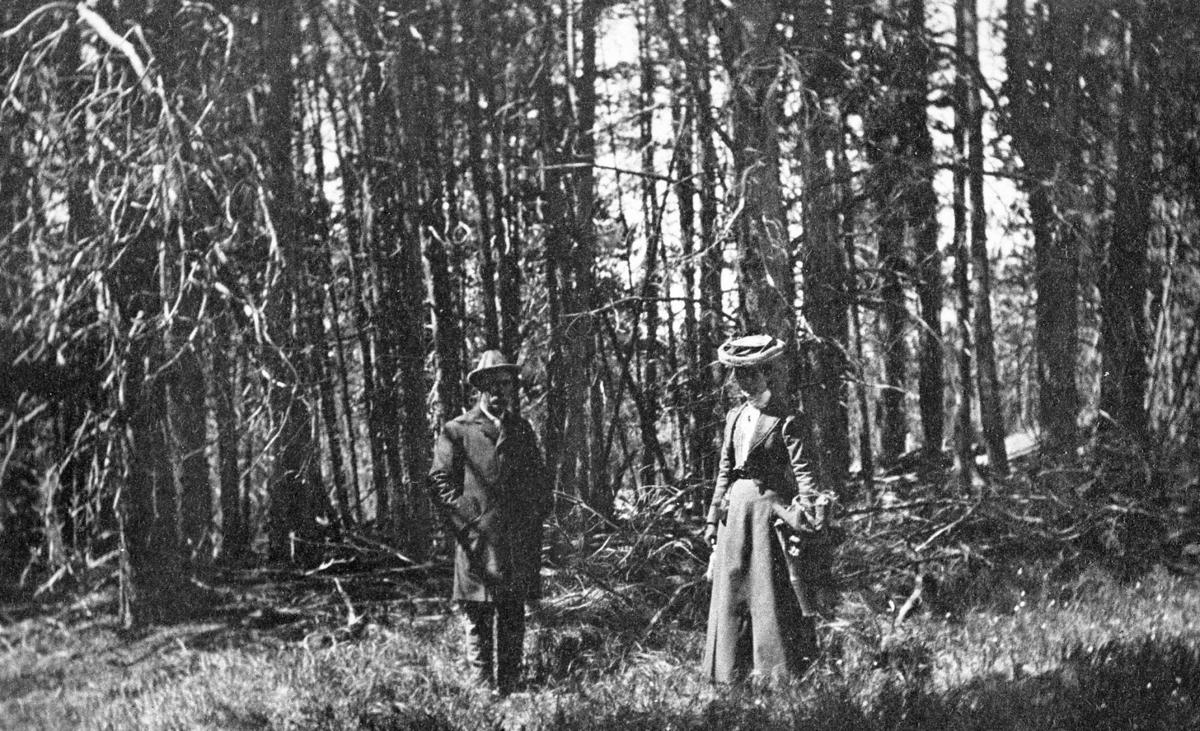 George and Emma Cowan are photographed in 1901 near the site where George was shot and Emma was taken captive by a band of Nez Perce Indians. 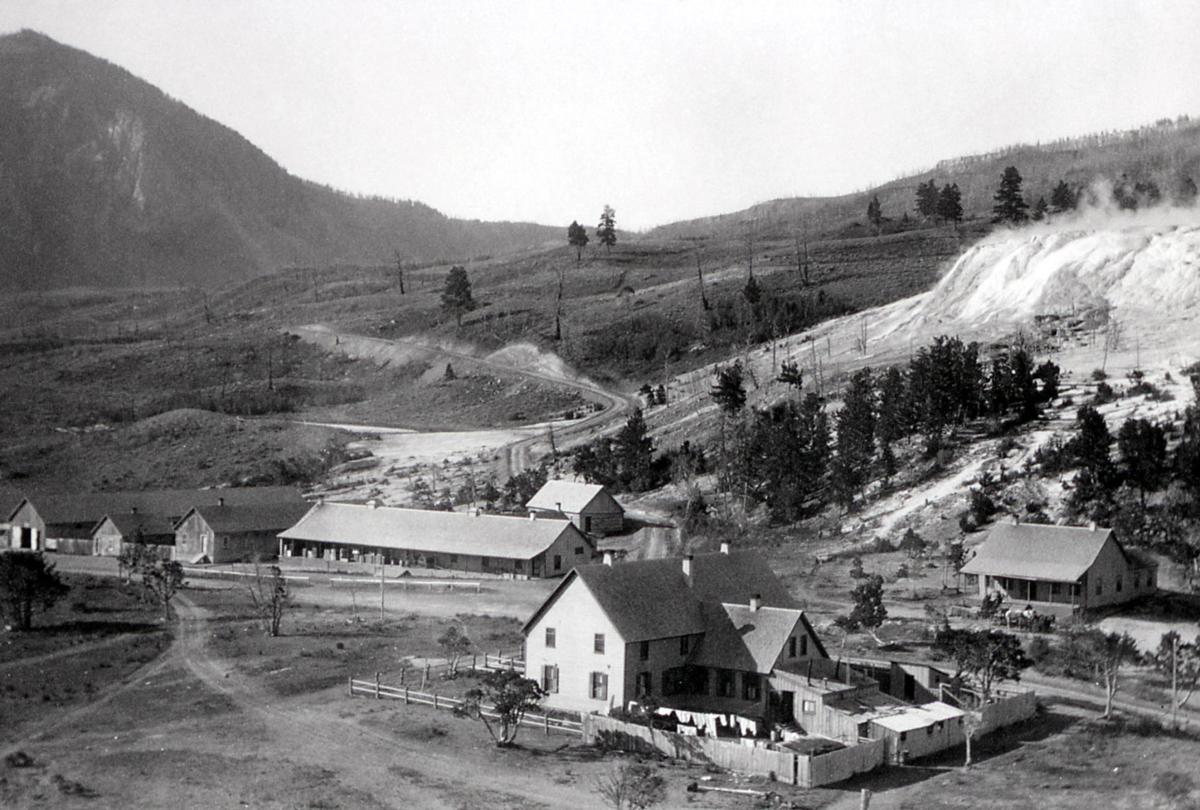 Camp Sheridan, which would later become Mammoth Hot Springs, Wyoming, is shown around 1900. Even as early as 1877 the community had a telegraph. 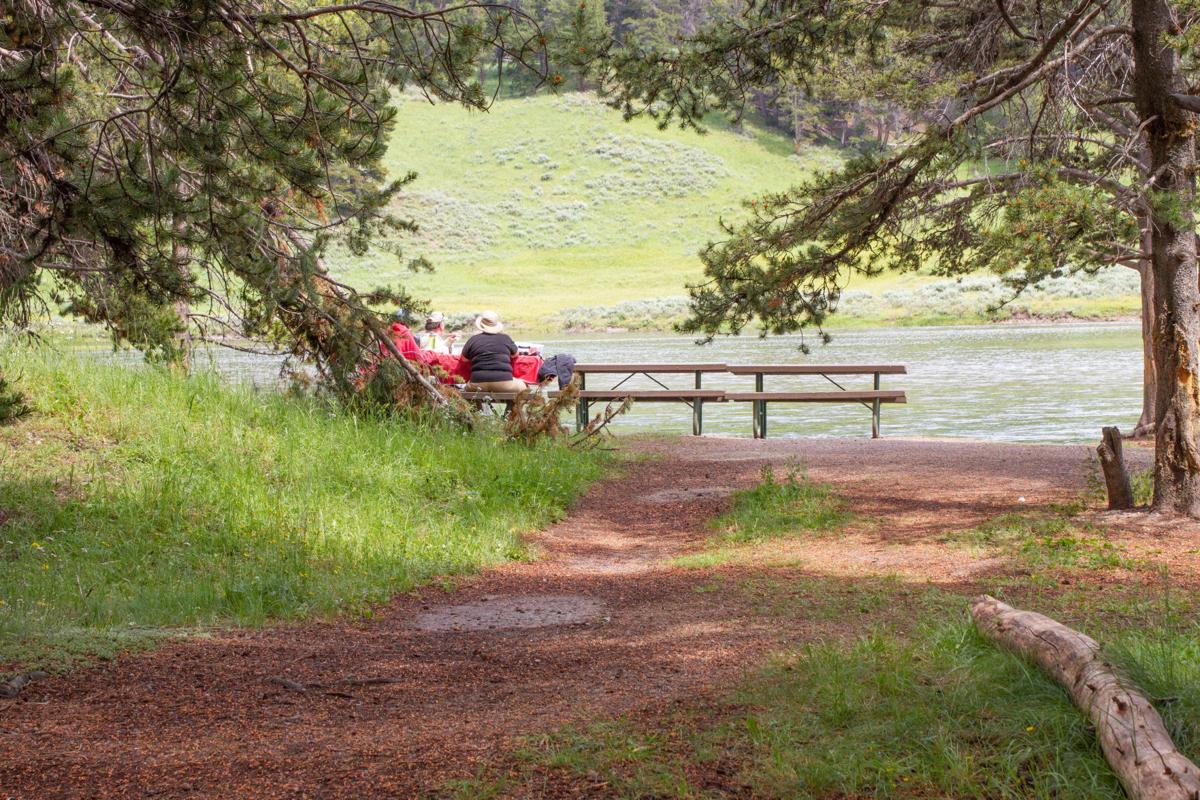 There is a picnic site along the Yellowstone River in the Hayden Valley called Nez Perce Ford, the place where the Indian band forded the river in 1877. 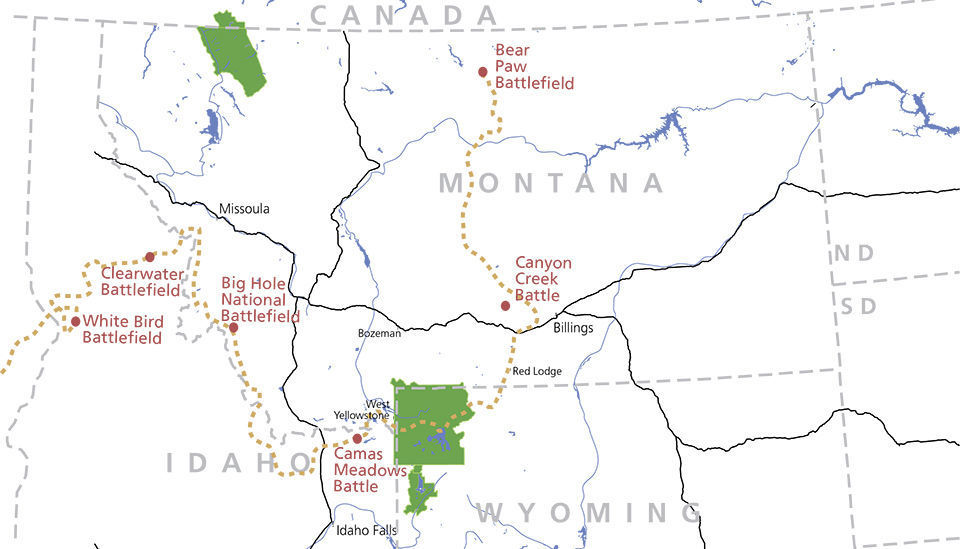 The Nez Perce Trail began in northeast Oregon, dipped into Yellowstone and ends near Havre. 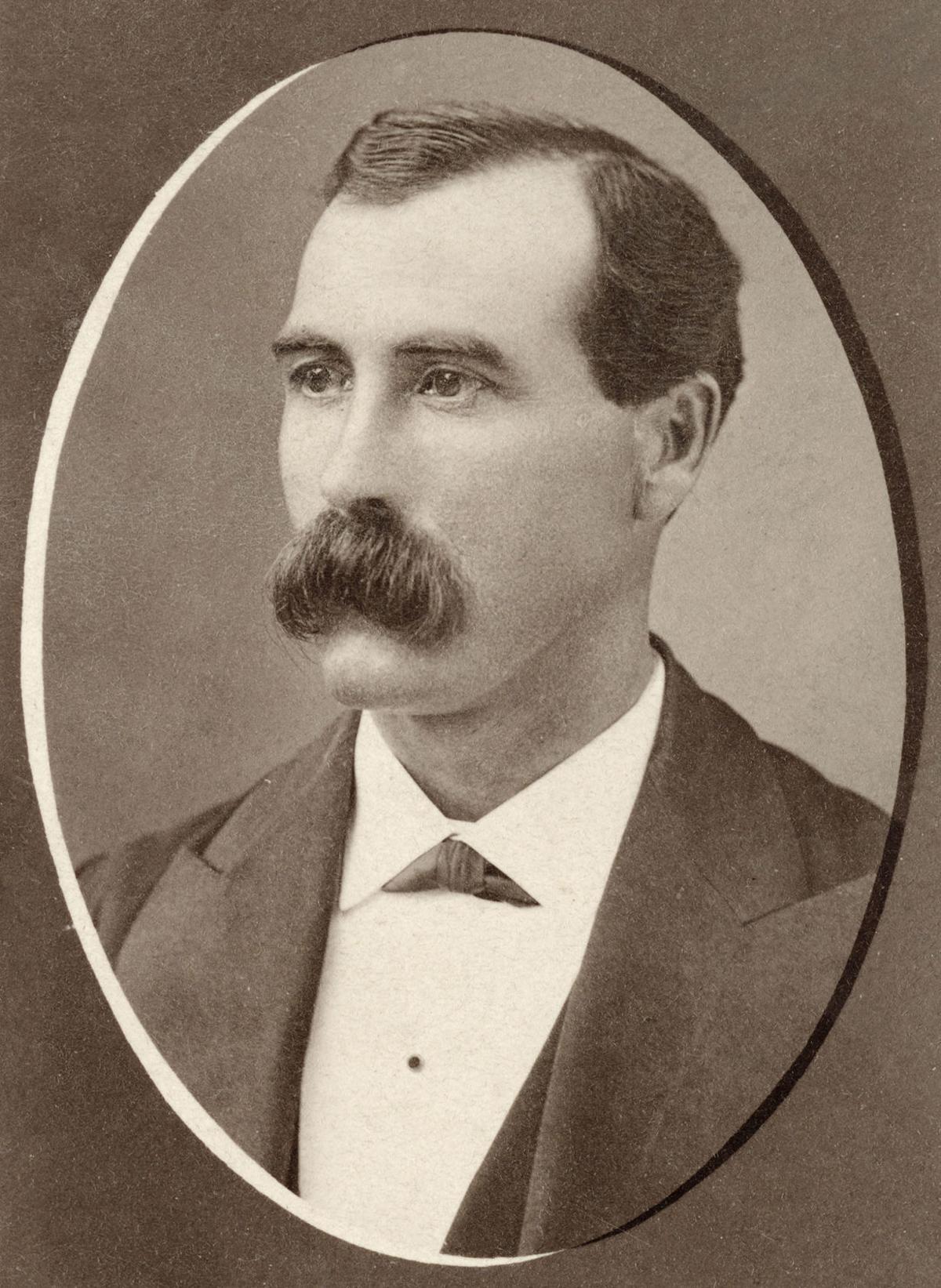