BOZEMAN — After 38 years of skiing, Bob Lyman is finally spoiling himself by investing in a brand new pair of custom backcountry telemark skis.

“I taught skiing for a long time, so I had the pleasure of skiing on all types of skis,” he said. “My loyalties shifted over the years, but ultimately they were all mass produced in China. Paying $1,000 for something that’s mass produced, cookie cutter didn’t make sense.”

So after trashing his most recent pair of skis he started looking around on the internet and found to his surprise a local ski maker. Seneca ski company, housed in a warehouse just off the main route from downtown Bozeman to the Bridger Mountains and their renowned “cold smoke” powder snow, formed 10 years ago.

That’s when Eric Newman, founder and manufacturer of Seneca skis and boards, began building skis on the side as he also attended Montana State University — not as an engineering student, though he has been a guest lecturer in that department, but in the School of Business.

“I was working 40 hours and had 15 hours of credits while at MSU,” he recalled while sitting at his desk in the upstairs office of the warehouse. “My junior year I was reprimanded by my advisor for having the worst attendance. He said I was either really smart, I don’t care or I have something else going on. But my grades were really good.”

After graduating in 2010 he was able to concentrate more completely on Seneca skis. At the time it was located in an unheated Belgrade warehouse.

“We couldn’t afford to heat the whole place,” he said.

So to stay warm he hooked a portable propane heater up to a hand cart so he could wheel it around to the different machinery as he worked.

Four years ago he re-incorporated with his partner and moved to the new shop along Bozeman Creek.

Over the course of his ski-building career he’s pressed, cut and hand-finished 700 pairs of skis. To build one pair takes him about eight hours. When he’s hired help they need about 16 hours to build a set of skis after six months to a year of training.

In the summer, when skis are less popular, Seneca is a one-man show. That’s when Newman has built stand-up paddleboards, wake surfers and for the past five years has crafted long skateboards. The skateboards took off in 2016 with sales of 300. Now Newman is using skateboards as a way to test different materials for skis.

Newman grew up skiing in the Northeast, where he raced before joining the MSU team. Then at the age of 21, while flying off a 75-foot gap jump backwards, he crashed and broke his neck and collar bone and shattered his back in six places.

After exiting a full body brace that encased him for six months, it took about another year-and-a-half for “reality to set in how stupid some of the stuff I was doing,” he said. “That was my epiphany.”

“I wanted to spend my whole life skiing, sharing it with family and other people, so I do this.”

Now Newman is 31, married, the father of two young children and parent to an inherited dog named Cicada who greets all who enter the Seneca shop. In between he’s lucky to squeeze in 30 days of skiing a year, compared to the old days when he clocked about 180 days on the mountain.

“I can’t really complain,” he said. “I think it’s important to pay my dues and get past the hurdles to where I can allow other people to run the shop.”

For buyers who purchase Seneca’s custom skis, trips to the mountain with Newman are part of the service to ensure a perfect fit.

“At other companies … everyone is hyper focused on design and, in my opinion, overlooking the most important thing, which is fitting,” he said.

A 30-minute questionnaire is filled out by the buyer to help calculate the specifications and dimensions of the Seneca Fully Custom skis. The people who benefit most from custom skis are not the most experienced, according to Newman.

“A good skier can make anything look good,” he said.

Lyman could hardly wait for Newman to mount his new telemark bindings and tune the skis so he could make his first turns on the fat new black Seneca boards.

“I am really quite excited,” Lyman said.

How Seneca makes a ski

There are still people in Mongolia who make their own skis out of a single piece of wood, but you won’t see any of those on ski slopes in Montana.

Today’s modern skis, like most sporting goods, are marvels of modern technology. Bozeman ski maker Eric Newman gave some insight into how to make a ski while giving a tour of his shop.

A CNC machine (computer numerical control) can cut the base to within 1/1,000 of an inch, which Newman calls the “foundation of the custom process.” The machine can also be used as a planer to get “a very dynamic flex profile,” creating a ski that is either stiff or soft.

Another specialized piece of machinery is a heated press capable of exerting 600 pounds of pressure. Using the press allows the layers to dry more quickly and makes those layers stronger.

Seneca makes its core out of nine layers of very thin wood — thin strips of maple around a poplar core — with the structural material as close to the top or bottom of the ski as possible.

“The combination gives you the best of soft and stiff,” Newman said.

That structural layer is covered by three layers of fiberglass on the bottom and nine on top.

In the custom skis, buyers can choose the wood that will show through, like a dark Brazilian rosewood, which is Newman’s favorite. Unadorned, the skis look like nothing else on the mountain. And the woods will never rot because they are soaked in resin.

“So your skis can literally last a lifetime,” he said.

Around the edges of the ski are race-grade, high carbon steel edges imported from Austria. The base is made of P-tex (a durable plastic) that has been injected with graphite for extra toughness.

Ballistic-grade Kevlar is added to Seneca’s Backcountry skis to take an impact and distribute it along the whole fiber. It also saves weight, shaving three-quarters of a pound from each pair.

Even though the skis contain wood, Newman said, “On the whole our skis are about one pound lighter than skis of similar specifications.”

The Signature series is the base model with no customization. It comes in three different versions: the All Mountain, Freeride and Backcountry. All cost $890.

“How they are different from every other stock ski is they are made in Montana and made sustainably,” Newman said.

They also benefit from the design of more custom skis.

“We let the customers drive the trends of how they change each year, if they change at all,” Newman said.

Those willing to pay the $1,800 for the Fully-Custom skis can pick out every one of the 60 to 90 components, as well as designate the ski’s dimension, taper, early rise and camber.

“It’s like buying pizza, you can go off the menu or order specific toppings,” Newman said.

The Semi-Custom ski, at $1,250, falls squarely in between the two extremes and is the most popular model Seneca sells. Even the Semi-Custom ski offers 450 combinations of geometry and materials.

A hug for ANWR: Man shows passion for refuge with ski trip

Eighteen years ago, Italian mountain guide Ario Daniel Z’hoo chose a travel destination in Alaska by picking a point on a map at random. His e…

Going into the last run on the last day of ski racing with a world title on the line, Lisa Ballard was separated from her other two competitor…

Beartooth Recreational Trails Association will hold its annual Ski and Gear Swap on Nov. 11 in Red Lodge at the Veteran’s Memorial Civic Center. 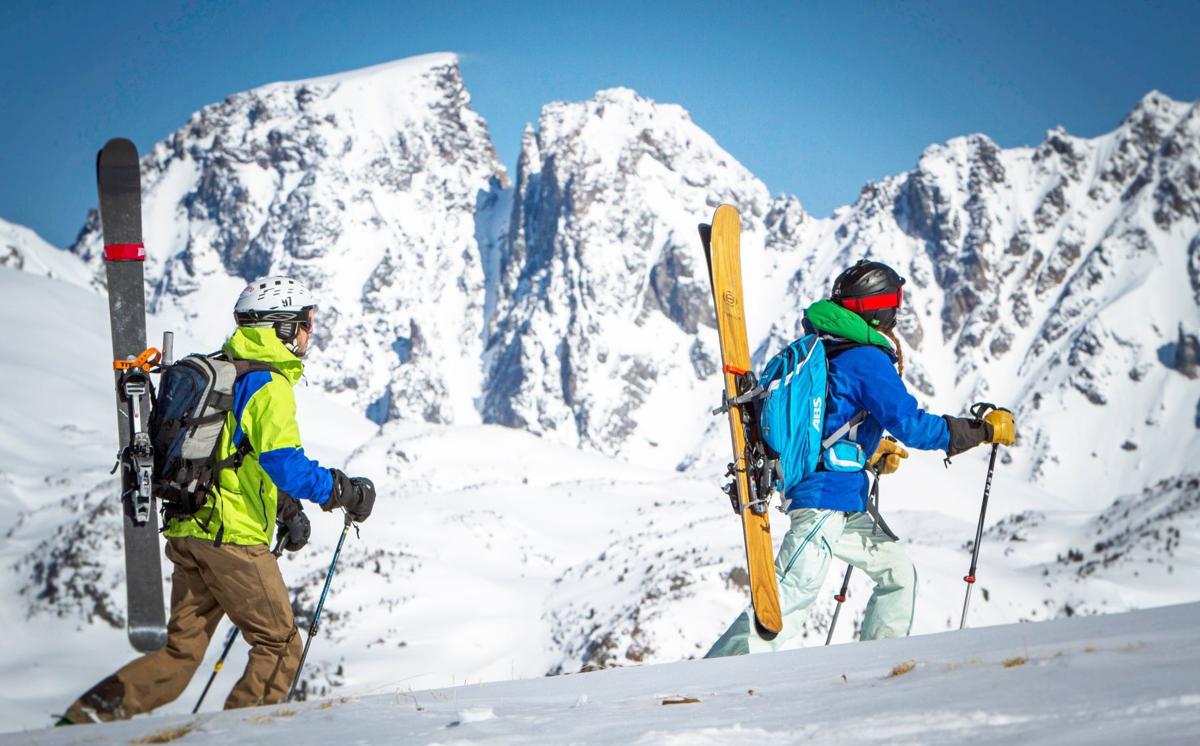 Seneca is a Bozeman manufacturer of handcrafted skis made from sustainable hardwoods. Founded by Eric Newman 10 years ago, the company offers three different levels of skis, including a Fully-Custom design where the buyer can choose all of the stats. 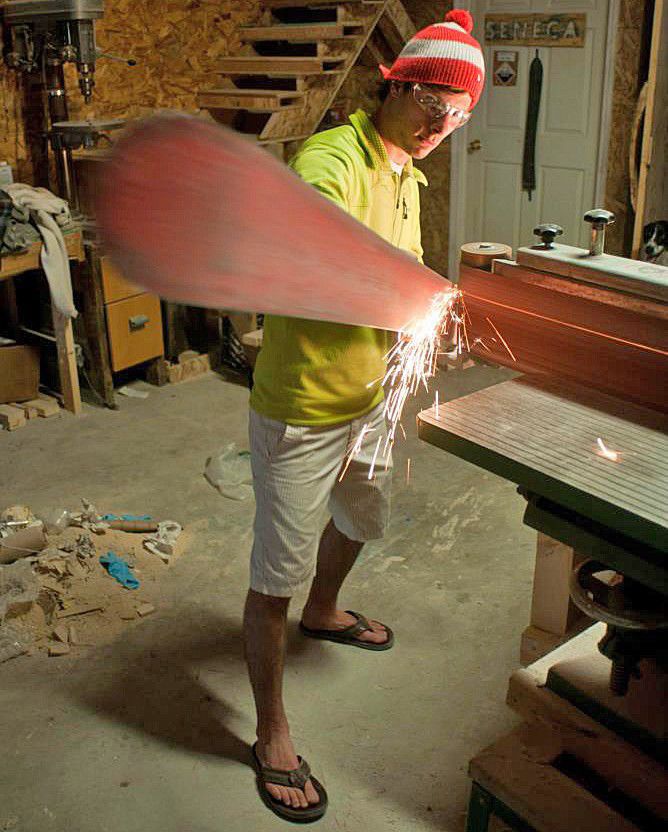 A ski is only as good as the tuning. "If a ski is off by 1/100th of a millimeter, if the edges stick up higher than the base, it is almost unskiable," Newman said.

Seneca co-owner Eric Newman holds a two pair of skis that have the base and tops laminated on and are awaiting a saw gut. He overlaps the lamination to ensure stronger edges. 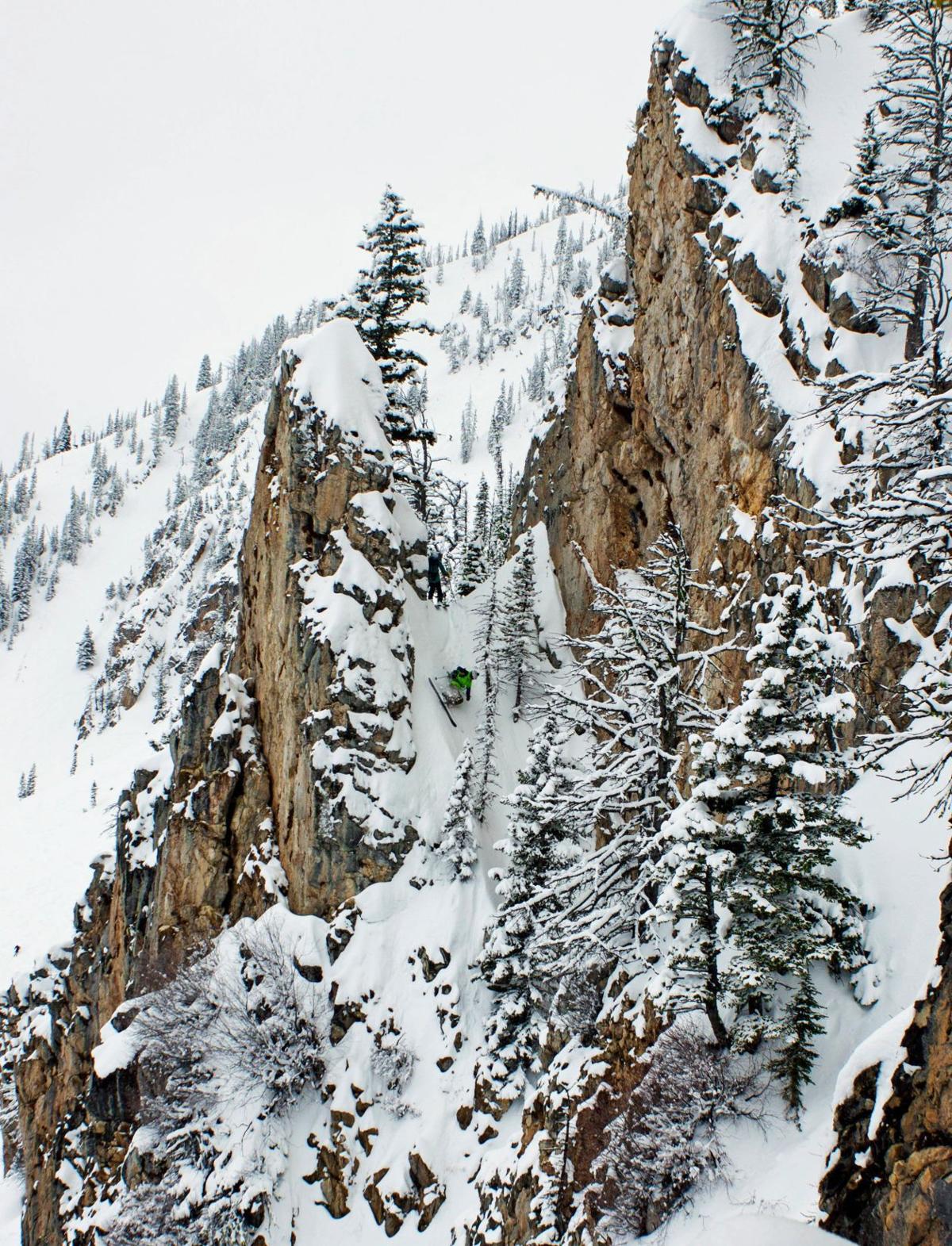 Look closely and you'll see a skier descending a narrow route through the rocks, a run called the Deviated Septum. The photo is one of the promotional shots for Seneca. 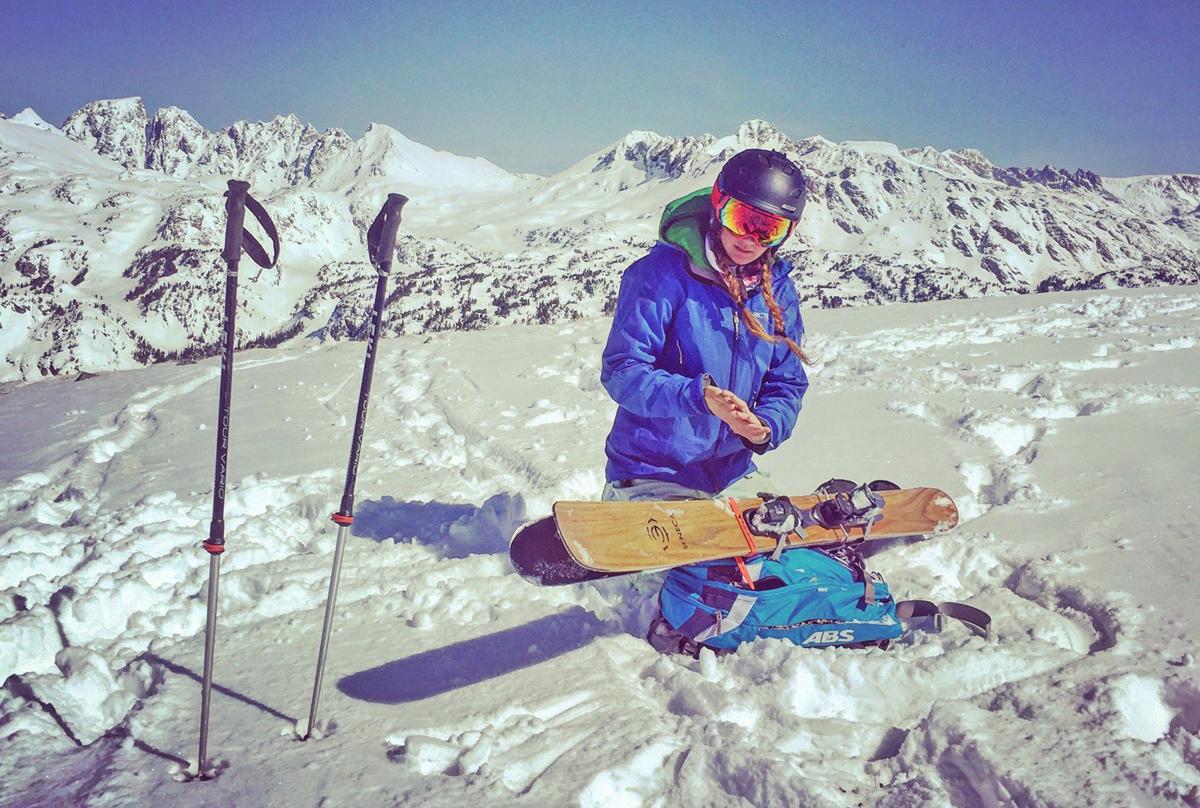 The wood finish that shows through on most of Seneca's skis makes them stand out on the mountain. In the summer the Bozeman company makes long skateboards. 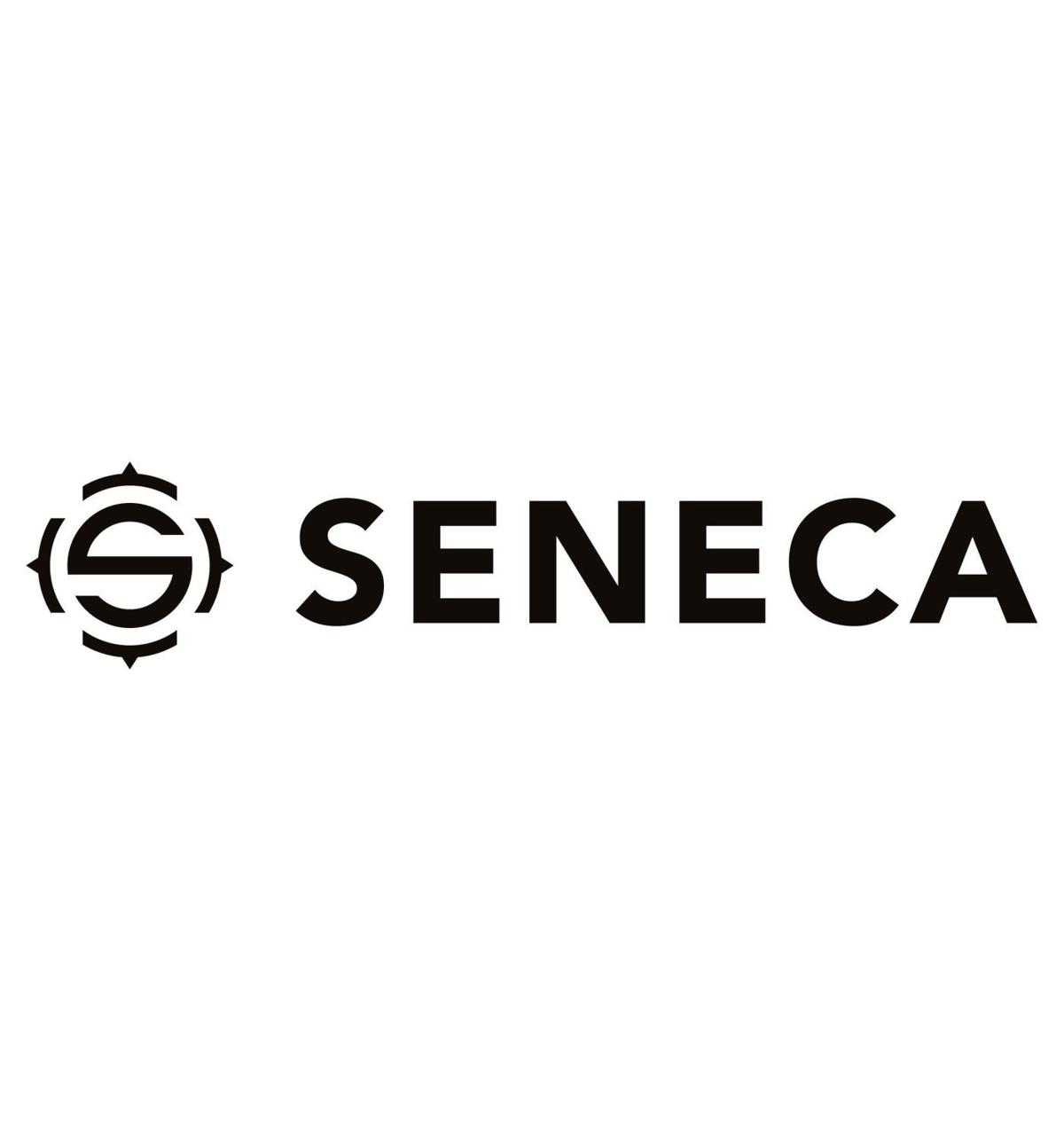 The Seneca logo is laser cut into the wood skis.