Motorcycle riders are no longer confined to the fair weather months. They can now purchase kits that swap out the front tire with a ski and replace the rear wheel with a track that resembles a smaller version of those on a snowmobile.

Interest in the motorsport is steadily accelerating.

“After Polaris bought Timbersled in 2015, that’s when things took off,” said Brad Abbe, owner of Power Sports Tech in Roberts, who used to sell the kits but now manufactures products for modifying snowbikes.

Timbersled, which started building the kits in 2008 in Ponderay, Idaho, had risen to the top of what’s becoming a competitive field among small businesses manufacturing the conversion kits. Polaris is one of the big manufacturers of UTVs, ATVs and snowmobiles. By buying Timbersled, Polaris focused attention and advertising revenue on what had been a niche in power sports.

Mark Hoffman has found his sweet spot in that niche. For almost two decades he built high-end, high-powered snowmobiles at his Clyde Park business Crazy Mountain Motorsports. In 2015 he dropped snowmobiles completely, moving on to snowbikes. After riding one, he no longer wanted to snowmobile.

“They’re way easier to ride because it’s narrow,” he said. “It’s not trying to fall over all the time” when stopped on a steep sidehill.

Hoffman said he’s seen 20% of the Crazy Mountains in his backyard on a snowmobile and now plans to see the other 80% on a snowbike because they can go where his snowmobile couldn’t, and with less of a workout for him. On a snowmobile he was constantly leaning, pulling and lifting while riding, but not on a snowbike.

“I’ve always been a motorcycle guy,” Hoffman said. He started riding when he was only 4 years old and has raced motorcycles.

Yet he put his daughter’s friend, who had never ridden anything motorized, on his 450 KTM and she was immediately cruising around a meadow doing figure eights and giggling, Hoffman said.

“The snowbike market is in its infancy right now, but it’s exploding,” he said. “I’m just really excited about the opportunities.”

Hoffman and CMX aren’t alone in seeing a spike in snowbike interest.

“We saw a decent increase in sales in the last couple of years,” said Travis Burian, owner of Yellowstone Motorsports in Bozeman, which sells the Timbersled kits.

Abbe began snowbiking in 2012. He was one of the first to sell the Timbersled kits out of his shop. Every year the company’s sales doubled. But motorcycles aren’t made for winter. Abbe would see his engine temperature drop in one minute from 180 degrees to 80 when he’d drive off-trail and into powdery snow that cooled the motor.

“I noticed right away bikes had problems,” he said, so he started making parts for his own use.

Now Abbe manufactures four products to make motorcycles more winter friendly, including a motor cover that keeps snow out and a thermostat to keep coolant at the optimal temperature. He started making the items for himself, then friends, and is now producing them for a worldwide market.

Burian and Abbe had also both snowmobiled before jumping to snowbikes. Converting motorcycles to be snow friendly machines pushed several buttons, the biggest being the maneuverability.

“It’s a riot,” Burian said. “You can make your own line wherever you want to go.”

Abbe said the bikes need a firm base of snow to ride on, otherwise they will chainsaw down. Ideally, 6 inches of fresh snow atop some hard pack is the best riding, he said.

“They’re so agile,” Abbe said. “You’re able to get into places you never would get into with a snowmobile.”

“It’s just like riding a dirt bike in the woods,” Burian said. “It changes how you ride in certain zones.”

Chilly White, writing in a 2018 article posted on bikebandit.com, explained the experience of riding snowbikes this way: “For those who have never ridden a snow bike, the best analogy I can think of is this; it is like riding a Jet Ski on sand dunes. There is a freedom unlike anything else I have ever done.”

White recommended a strong bike since the “the track and deep snow suck horsepower.” Burian rides a Honda 450. White also advocated an electric start, since “kick starting a snow bike requires some balancing technique. The rider is an extra foot or so in the air, so no touching the ground.”

Pockets of devoted riders have sprung up in places like Bozeman and Kalispell, Abbe said. Many of them are older, looking for something different from snowmobiling. But he’s also seen groups of riders with a wide-range of ages — from 16 to 60 — because snowbikes are so easy to ride and fun.

The idea of snowbikes has been around a long time. Searching the internet turns up a snowbike built by BMW in 1936, called the Schneekrad. The only problem was it couldn’t be steered. That has been followed by several other creations with catchy names like the Sno Go, which mounted two skis to the front of a motorcycle’s wheel, without taking the wheel off, and a twin track to the back; the Sno Shoo, which featured a ski on the front and a wide track on the back; the Sno Byke and Sno Blazer, resembling modified scooters, and the Shrew, Sno Job, and Alpenscooter — all early motorcycle-snowmobile hybrids. Chrysler even got into the business by buying the Sno Runner from a Japanese chainsaw manufacturer.

In 2001 A.D. Boivin, a Canadian company, introduced the Snow Hawk, which never quite took wing and was sold in 2011.

It took the X Games to launch the sport to a wider audience in 2017. White, the bikebandit.com writer, credited 2 Moto with creating the modern snowbike kit, but said Timbersled took the invention to the next level by making its kit better at plowing through backcountry powder. Yeti, MotoTrax, Camso, and Montana’s own Crazy Mountain Sports are other kit manufacturers. Riders in online chat rooms extol the benefits and downsides of the different kits.

Crazy Mountain Motorsports touts a kit with a proprietary 12 ½-inch wide track that sports 2 ½- to 2 ¼-inch lugs for gripping the snow. The wide track is all about flotation atop the snow, which is especially important to backcountry riders. In the front, CMX offers its own 11-inch wide ski.

“They do go really well in handlebar-deep snow,” Hoffman said.

He touts his track for its lack of roll resistance, it moves easily when you push the bike, which means the engine doesn’t have to work as hard to turn the track.

Despite its Star Wars look, the technology is fairly easy to install, Hoffman said. Prices for his new kits start at about $7,600 and climb depending on track size and add ons. He recommends hand guards, an engine blanket and thermostat at a minimum. A brand new bike tricked out with all the coolest stuff and ready to ride could cost $21,000.

“The kits keep getting better and better,” Abbe said, just like snowmobiles have advanced with better technology.

“It’s fun to be involved because it’s changing. People keep coming out with new ideas,” he said.

Thirty-five years after the abduction and shooting that would forever change her life, former U.S. biathlete Kari Swenson has candidly discuss…

A new sign has been posted on the edge of Cooke City in an attempt to alert snowmobilers and backcountry skiers to the area's avalanche conditions.

More than 40 years ago some skiers at Bridger Bowl Ski Area would chop off a regular pair of skis to about 3 feet long, reattach bindings to t…

Roads in Yellowstone National Park will begin to close to oversnow travel on Sunday, March 1. Spring plowing will start as road segments close. 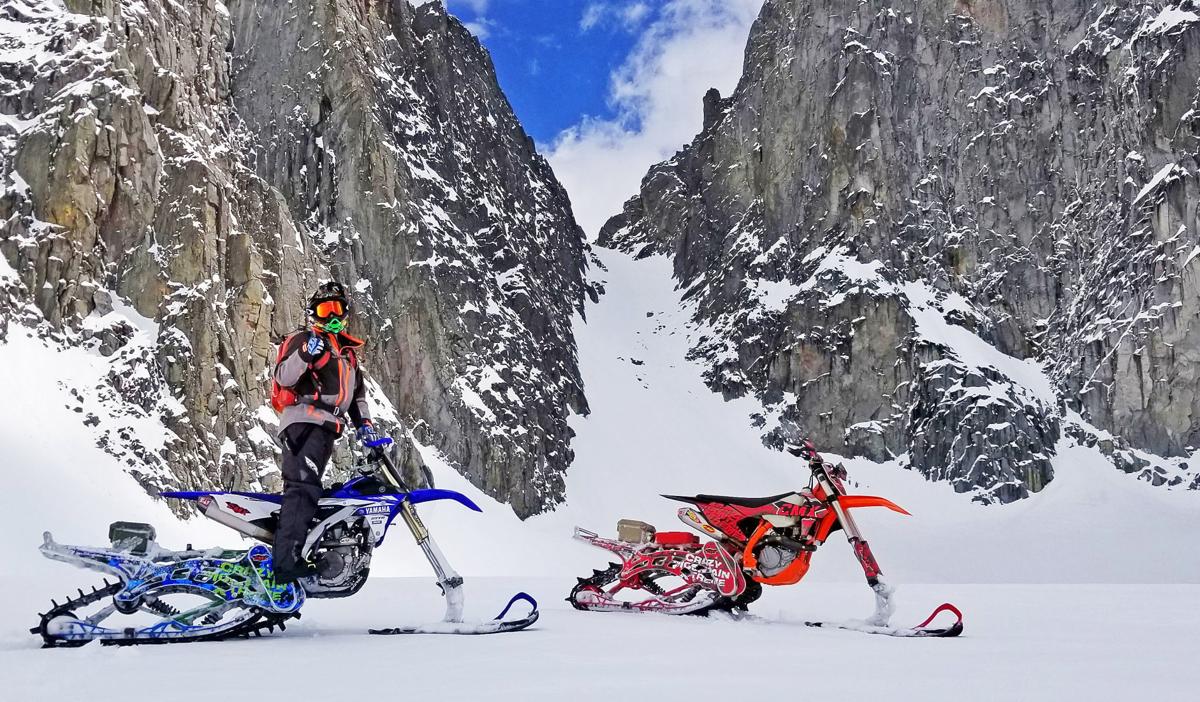 Based in Clyde Park, Crazy Mountain Motorsports dropped snowmobile manufacturing after almost two decades to jump into the snowbike market. The kits attach to motorcycles to make them snow-shredding machines. 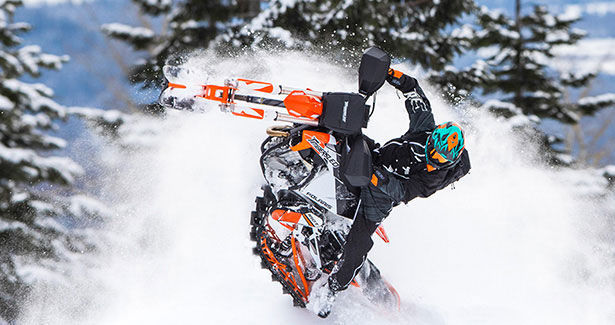 Timbersled began as a small manufacturer of snowbike conversion kits in Ponderay, Idaho, before being bought out by Polaris. 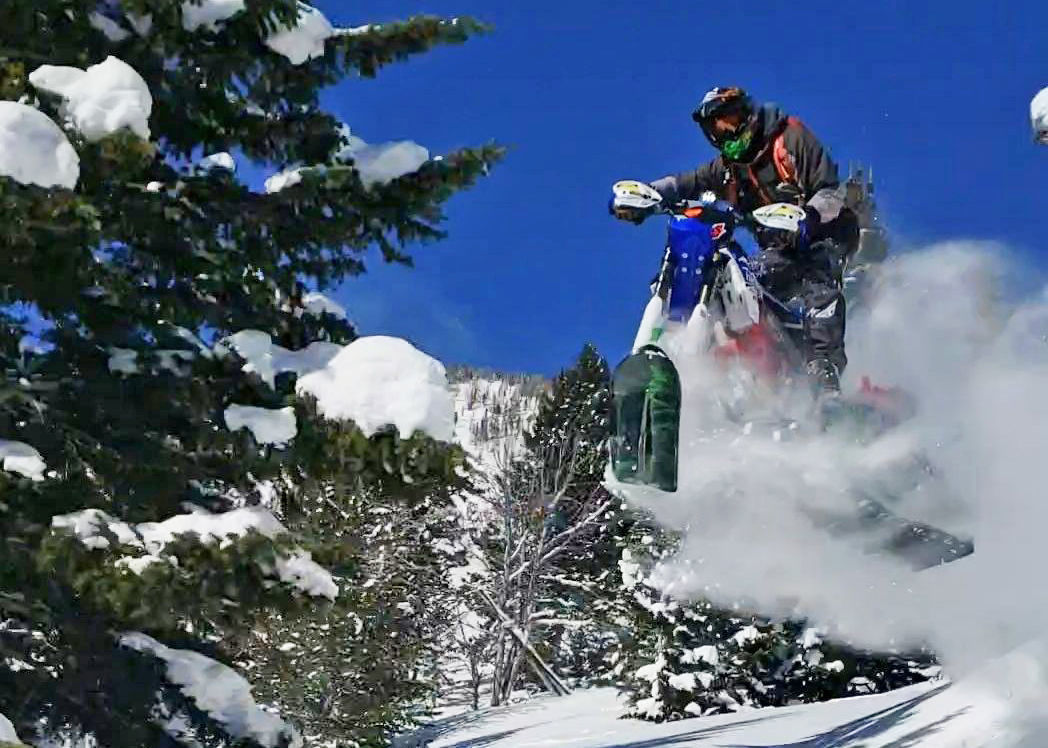 Crazy Mountain Motorsports owner Mark Hoffman builds kits for all types of motorcycles but likes the KTM 450 for its lighter weight. 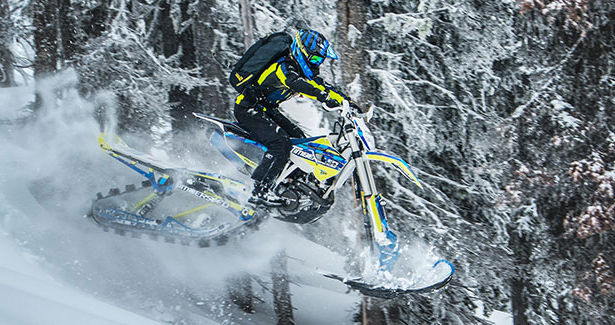 Mountain riding on a snowbike requires some different strategies for negotiating hills, but overall riders say its much easier to ride a snowbike and a lot of fun.