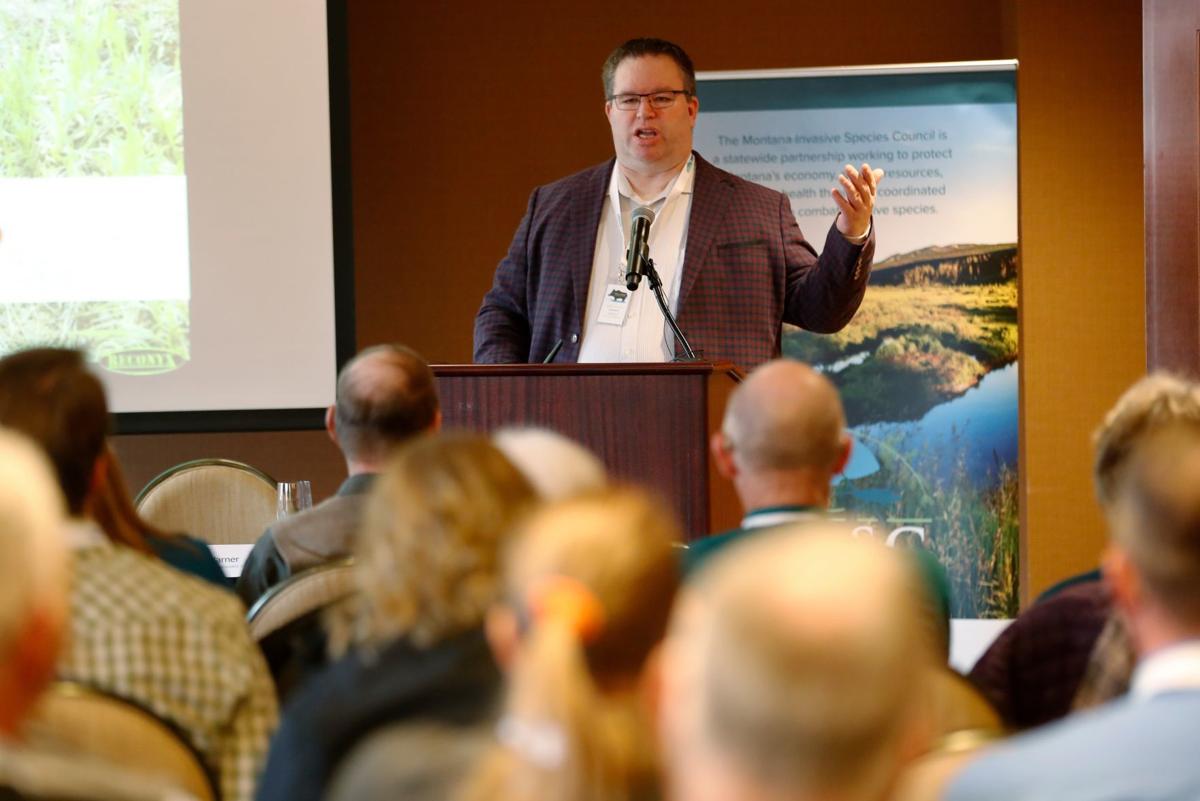 Ryan Brook, associate professor at the University of Saskatchewan and director of the Canadian Wild Pig Research Project speaks at a conference on the threat of feral pigs in Montana at the Northern Hotel on Friday. 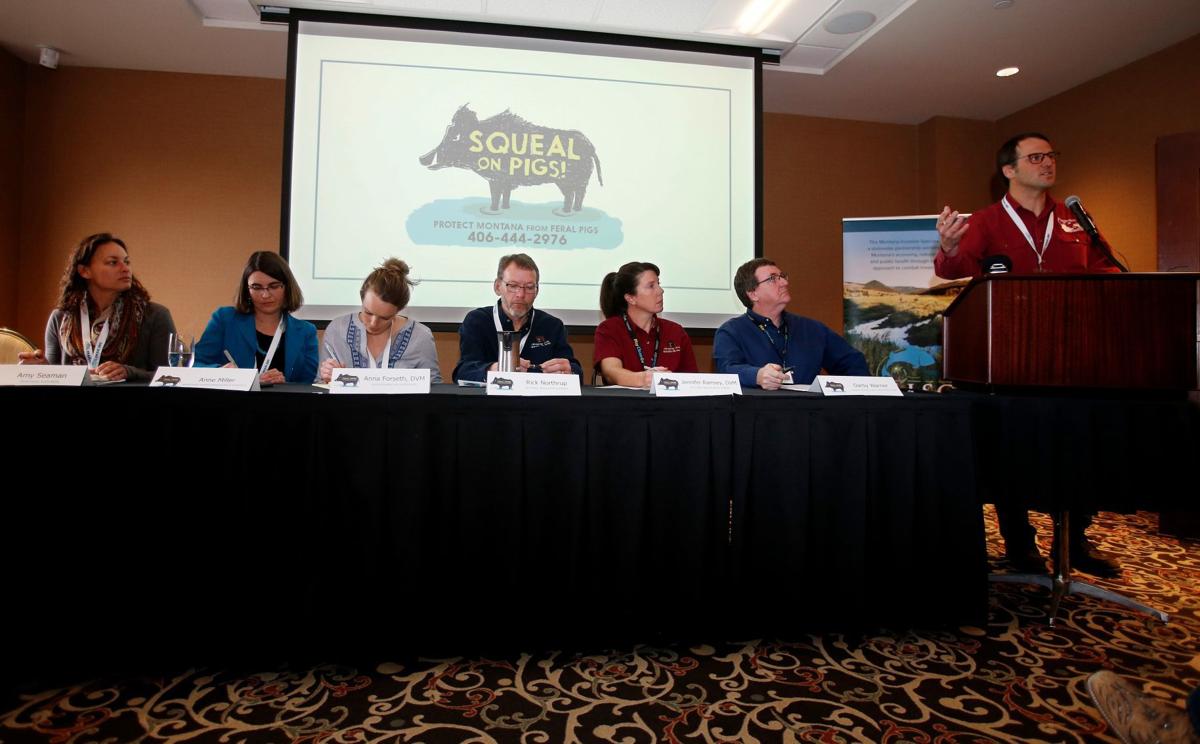 Nick Gevock, right, of the Montana Wildlife Federation, speaks as part of a panel at a conference on the threat of feral pigs in Montana at the Northern Hotel on Friday, November 15, 2019. 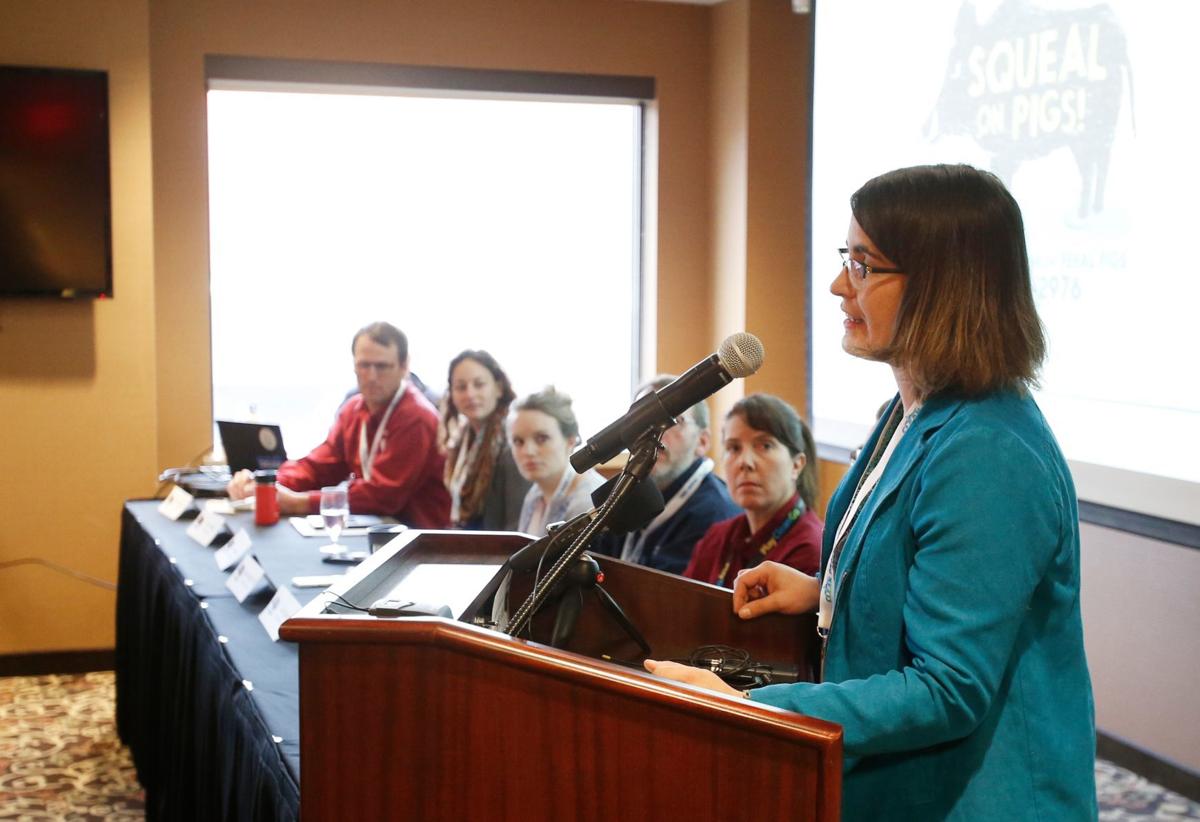 Anne Miller of the Montana Pork Producers Council speaks as part of a panel at a conference on the threat of feral pigs in Montana at the Northern Hotel on Friday, November 15, 2019. 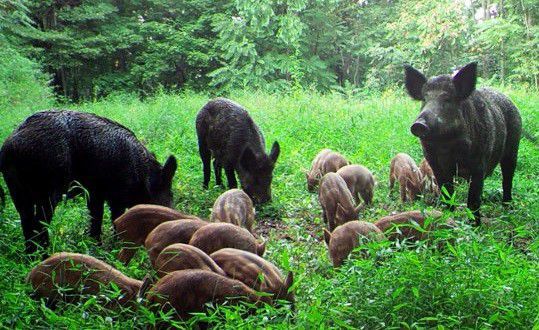 A "sounder" of feral swine includes piglets and adult females, including one dominant female.

Feral swine are prolific breeders, producing an average of six in a litter and breeding year round with a gestation period of less than four months. 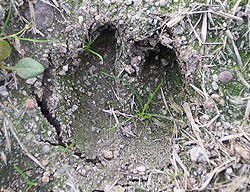 Feral pigs have hoof prints that look similar to deer but are more rounded.

But, like so many invasive species, the threat is being compounded by humans.

“Some of their biggest spread in the United States is at 80 mph on the back of a pickup,” said Nick Gevock, who leads the Montana Wildlife Association.

Hog hunting is big business, especially in Southern states, but it doesn't do much for controlling the population growth of a pest that causes billions of dollars in damage with massive environmental effects.

Officials detailed the problems that a hog-hunting culture has caused both in Canada and other U.S. states during a summit on feral swine hosted by the Montana Invasive Species Council in Billings on Friday.

For example, it's open season on the Canadian hogs that appear poised to creep into Montana, having been sighted only five miles away. But their population has only boomed.

A Canadian push to expand agricultural diversity led to the importation of European boar to cultivate for meat or game farm hunting, according to University of Saskatchewan researcher Ryan Brook. Some farms cross-bred them with domestic pigs, which yields larger animals.

Escapees, or those who were turned loose, from those operations have thrived in Canada. Some people have also turned loose pot-bellied pet pigs that seemed cute as piglets, then "hit 250 pounds and craps on your sofa,” Brook said.

That seeded a population that was nearly nonexistent around 2000. Pigs seemed to have a foothold by 2010, occupying about 125,000 square miles. Yet, Brook's early research was often met with skepticism. Pigs were isolated in rural areas, and most people never saw one.

"The first five years was like studying Sasquatch," Brook said.

But feral swine merited attention. The hogs can wreak havoc on agriculture, eating anything that grows or simply destroying cropland and potentially spreading disease to livestock.

“We could talk all day" about disease potential, said state department of livestock veterinarian Anna Forseth.

A previous U.S. Department of Agriculture estimate put national damages at $1.5 billion each year. The agency has stopped putting an exact number on damage, said Dale Nolte, who runs the USDA feral swine damage management program, because it’s difficult to determine. But he said it’s likely at $2.5 billion now.

Then there are infinite potential environmental consequences. Feral swine have the potential to destroy native habitat and create food-chain disruptions.

Since 2010, the pig range that Brook measures has increased five-fold, and the population just keeps growing. Pigs are prolific breeders. Wild hybrids average litters of six, they breed year-round, and gestation is less than four months.

That population increase comes despite the pigs being hunted as game.

“There’s no evidence that sport hunting has helped here,” Brook said. “It would be fair to say that it’s actually created more problems than it's solved.”

He believes he has evidence why. Feral swine exist as solitary, wandering males, or in packs called "sounders," which are made up of a dominant female with some other adult females and slew of piglets.

Without hunting pressure, those groups tend to be larger and less wary of human activity. They're easier to locate and eradicate, whether by trapping or shooting.

But under hunting pressure, sounders are smaller. The culling of a hog from a sounder can split up the group, and leave the rest of the pigs — smart, adaptable animals — more withdrawn and cautious of human interaction.

In some ways, the introduction of feral swine is a historical repeat. Pigs came to what would become the state of Florida with Spanish conquistadors in the 1500s. The Spaniards would disperse pigs across the landscape, knowing that the adaptable critters would survive and hopefully become a huntable food source.

The pigs would far outbreed their harvest. Some would go on to migrate naturally. But much of their spread to 37 states where the feds believes feral swine reside was driven by humans, Nolte said.

It's not uncommon for a landowner to get a knock on the door a few months after the first sighting of feral swine on their property. A well-meaning hunter will offer to take care of the landowners' hog problem.

"Some of that could just be good citizenship," Nolte said with a note of sarcasm, drawing chuckles from conference attendees.

Often it's because the hunter created the problem in the first place, turning transplanted pigs loose on private land hoping to surreptitiously create their own personal hunting preserve.

"It's hard to catch somebody that lets them go," Nolte said, echoing Gevock's pickup truck comments.

Hunting-related incentives help drive the spread of feral pigs, said John Steuber, who leads a federal program in Montana that aims to prevent wildlife-caused agricultural damage. That work includes killing predators, and the group would be a go-to if feral swine appear in Montana.

In addition to hunters seeking a trophy boar, landowners recognize that hog hunting opportunities can increase revenue from a hunting lease.

When news about hogs at Montana's northern border flares up, so does out-of-state interest.

"We started getting calls from hunters wanting to come up to Montana to hunt pigs," Steuber said.

They can't, and not just because there's no confirmed population in the state.

In 2013, a man imported three feral hogs from Texas into Montana. The hogs were killed in an agreement with state officials, but the incident sparked a 2015 state law banning feral swine hunting and placing the animals under the purview of the Department of Livestock.

It imposes a fine between $2,000 and $10,000 per violation, bans the import of boars or any feral pig, and requires notification of any feral pig sighting within 24 hours.

It does, however, give landowners something of a first shot at pigs on their property. The Department of Livestock interprets the rule as allowing a landowner to kill feral pigs if they threaten their safety or if they believe there’s an immediate threat that pigs could expand their range.

“If we knew in 2014 what we know now, we probably would not have allowed that initial take by a landowner,” Montana State Veternarian Marty Zaluski said, citing the evidence that sport hunting can make eradicating pigs harder.

Feral Canadian hogs encroaching on Montana border are a concern for farmers, others, officials say

KALISPELL — Wildlife officials say feral hogs from Canada encroaching on Montana's northern border are a serious concern for farmers and others.