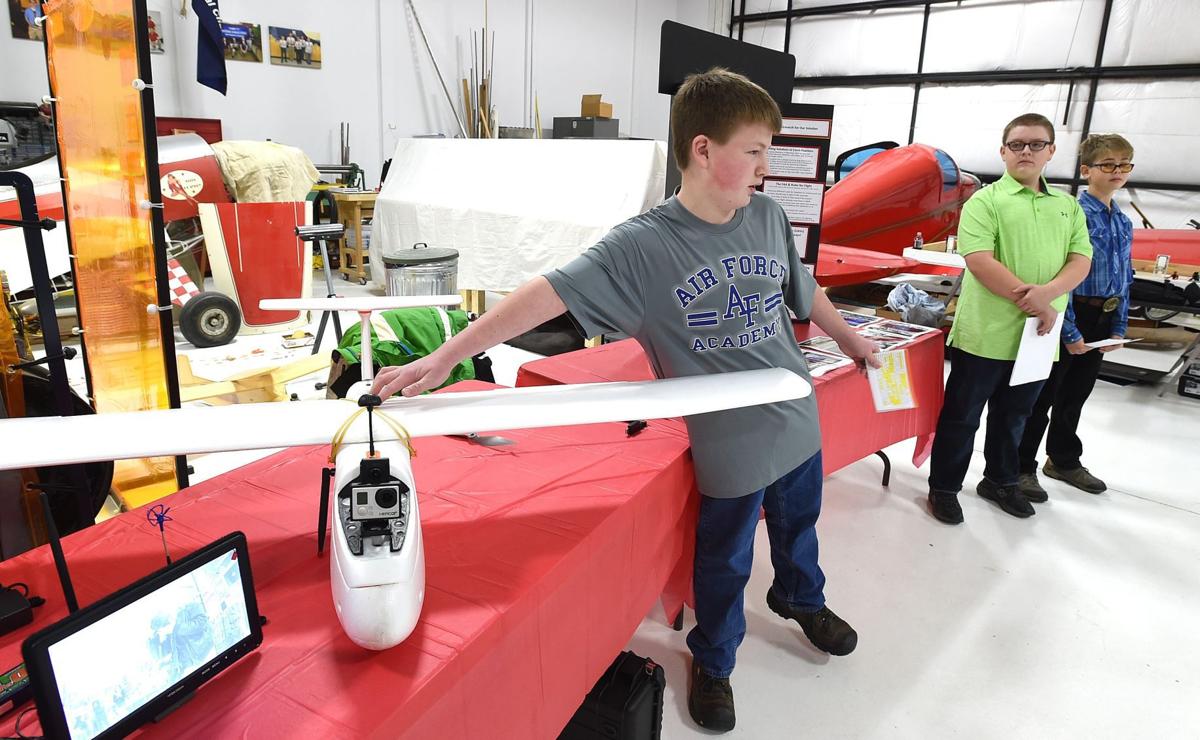 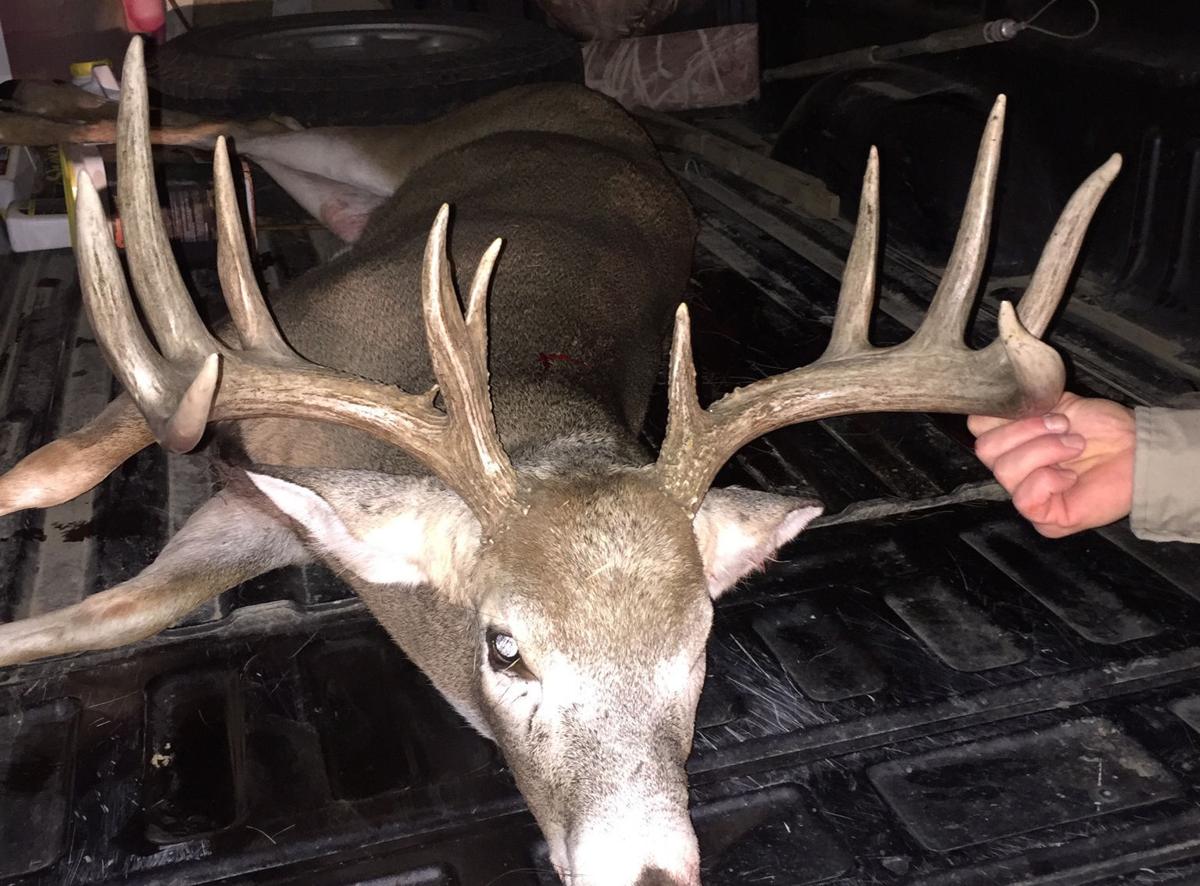 The poached animal was “another eye opener” for the 12-year-old Medicine Crow Middle School student who, along with classmates Tucker Adkins and Hunter Nixdorf, has been working on a project that could help game wardens catch people like the poacher who killed and decapitated the roadside deer.

“This could have a real effect,” said Jeff Ewelt, ZooMontana director, who helped counsel the students. “It’s good stuff.”

Ewelt was one of the dozens of people who attended a presentation by the middle school students last week in an aircraft hangar as they showed the final product to those who had helped with the project. One of those was Fish, Wildlife and Parks game warden Matt Ladd.

“They spent several hours with Matt in the evidence room” looking at confiscated weapons, vehicles and trophies from poaching cases, said Amelia Campbell, an ExxonMobil engineer who is a volunteer coach. “Jeff (Ewelt) taught us about poaching worldwide.”

Ladd said the Styrofoam, wood and carbon-fiber plane the students built from a kit for about $1,000 is simple enough to be operated by a warden during poaching cases.

“I anticipate, especially for spotlight patrol with a heat-sensing camera, it could be real beneficial,” Ladd said. “They’re already using them in other countries with military support, like Kenya.”

Tucker said the students were inspired by multi-rotor drones being used by the U.S. Fish and Wildlife Service and World Wildlife Fund to spread plague vaccine in Eastern Montana to prairie dogs, a prime food source for endangered black-footed ferrets.

“That’s how we came up with the idea,” he said.

In African nations the poaching of rhinos and elephants for their horns and ivory fuels a multimillion-dollar illegal trade network. As poachers have become more sophisticated, conservation groups like Air Shepherd are using similar unmanned planes to stifle the killing.

In Montana, the students learned that poaching is most prevalent near Bozeman, north of Hardin and south of Harlem. In addition to singular cases, where just one animal is killed such as a deer for its antlers, FWP wardens have made cases against repeat offenders who received jail sentences of up to 20 years and thousands of dollars in fines.

“It’s hard to quantify” how big Montana’s poaching problem is “because there is a lot we don’t know about,” Ladd said. “The commercialization of wildlife has contributed to that and made it more of a problem.”

In addition to the market for large antlers from species like deer and elk, trophy bighorn sheep horns or the paws and bile ducts of black bears are also animal parts with commercial value. Hunter noted in his portion of the presentation that poaching also leads to broken fences and a loss of public hunter access to private land.

Maybe an anti-poaching drone, or a fleet of them, could help game wardens police the problem, the students suggested.

“The deterrent factor alone would be a huge benefit,” Riley said.

With help from Kurt Kreiger of Model Avionics, the students equipped their plane with a small digital camera and downloaded free software that is used to program the aircraft’s 45-minute flight path.

“It’s really user friendly, but it has the drawback that someone has to get it in the air, which is easy with this one. You just have to rev it up and throw it,” Kreiger said.

Once in the air the plane covers its pre-programmed flight path. At the end of the session the plane returns to a programmed point for landing via a remote control. In its test flight the plane flew at an elevation of about 100 feet at a speed of only about 30 mph — low and slow.

“That technology is getting enough time on it now that it will be affordable enough for fish and game to pick up on it,” Ladd said. “We now do manned flights out of a Super Cub (airplane). We could train a lot more people to do this.”

That was the students’ idea.

“What they wanted to do is make it so anyone could fly it,” said Jerry Scherer, Riley’s father. “There are places this could get to that you don’t have to put yourself at risk to see.”

The students will test drive their presentation on Jan. 14 before traveling to Bozeman for the statewide competition on Jan. 28. The top two finishers at Bozeman qualify to go to the national competition. In all, the First Lego League Challenge is held in 80 countries and attracts 28,000 teams ages 9 to 16. The contest is meant to teach children how to think like scientists and engineers, as well as adhere to the core values of discovery, teamwork and gracious professionalism.

“It’s cool how the kids really glom on to this,” Kreiger said. “They’re sponges.”

“This is the kind of stuff that makes you want to be an engineer when you grow up,” Campbell said, “and you don’t even realize it.”

A Lithuanian carp bait machine, peanut butter and drones all have something in common — the inoculation of prairie dogs against a deadly disea…

On the lookout for poachers

Jeff the Nature Guy introduces a group of students from Medicine Crow Middle School who made a drone that can help catch poachers.

A House bill that would fund nearly half of the Montana Fish, Wildlife and Parks’ warden budget with federal dollars for the next two years ha…