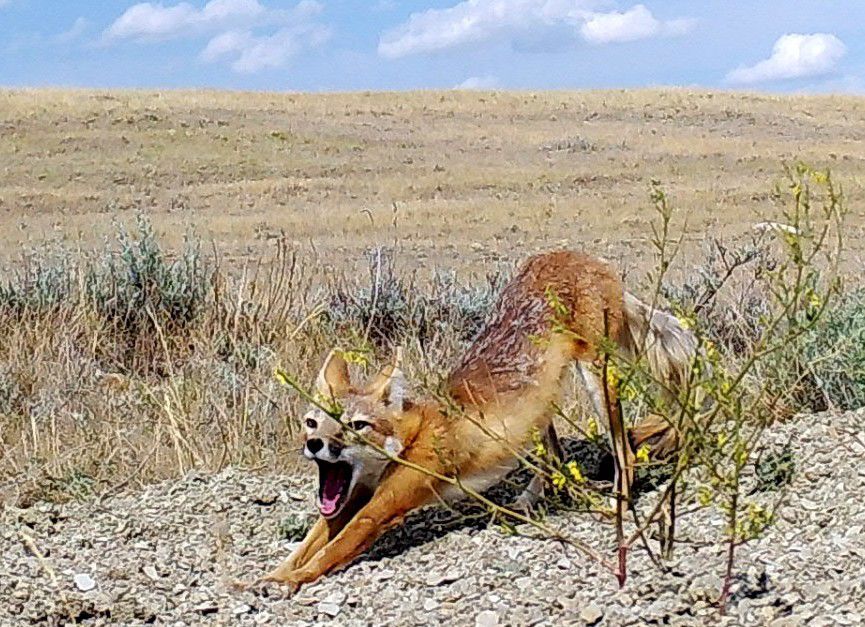 Swift foxes are mostly nocturnal animals, spending most of the daytime in their dens. 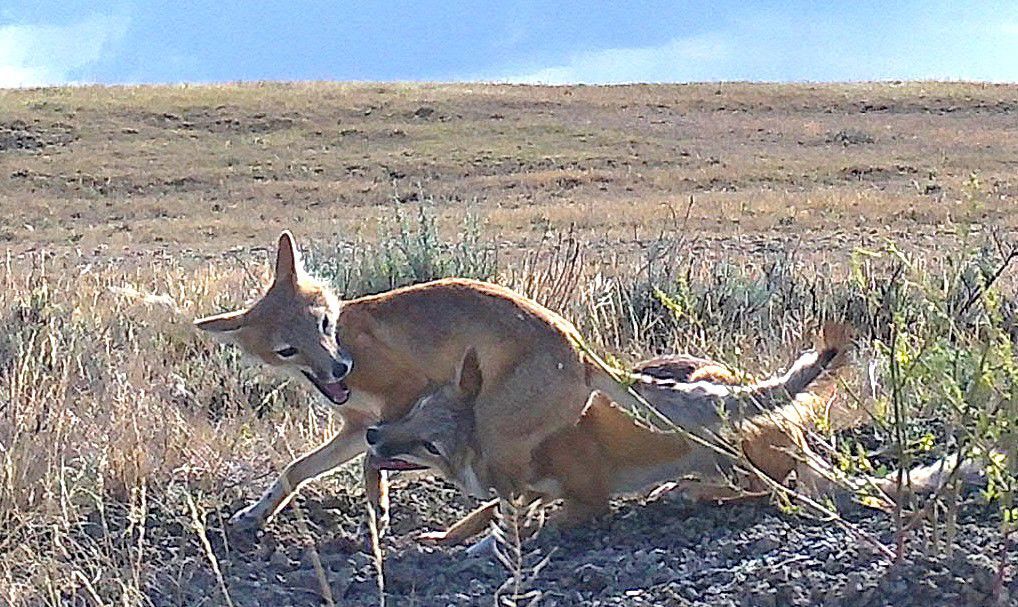 A camera trap captured this shot of two swift foxes wrestling in northeastern Montana next to their den.

With a growing population of swift foxes in northeastern Montana, a boundary line where they can be trapped has been pushed farther east.

The Montana Fish and Wildlife Commission approved the new boundary during its Thursday meeting. The idea was to match the eastern boundary with an existing big game hunting district boundary and thereby avoid confusion for trappers.

The previous border was established more than a decade ago to separate populations available to trappers from an area of the Fort Peck Reservation where the animals were being reintroduced through 2010.

“There appears to be a viable population and the buffer is no longer justified,” Fish, Wildlife & Parks stated in its proposal for the change, written by Glasgow native species biologist Heather Harris. “This change allows for swift fox that have been incidentally harvested to be kept by the trapper and to count against the quota. It also allows for simplification of the regulations and an increase in opportunity.”

In addition, the commission approved shortening the trapping season for swift fox from Nov. 1 to March 1 to Nov. 1 to Jan. 15 in an attempt to lessen the chances of trapping adults during the breeding season. Swift fox may breed from late December through early March.

“Ending the season January 15 will reduce if not eliminate the harvest of fox during their breeding season, likely improving successful breeding and pup survival to a small degree,” Harris wrote.

“This change should not significantly limit coyote trappers opportunity to take a fox since approximately 88% of swift fox harvest occurs before the proposed closure date of January 15,” Harris added.

Montana has allowed swift fox trapping since 2010. Only 10 swift fox can be trapped each year in the Region 6 Trapping District along the Hi-Line, where the boundary was expanded. Each trapper is limited to three animals a season.

KC York, of Trap Free Montana, told the commission the changes weren’t enough to protect the animals. She also questioned why the state even allowed a trapping season for the foxes since they are no threat to humans or livestock.

“It contradicts the goal of the swift fox (recovery) strategy,” she said.

The animals are listed as a species of concern in Montana. Populations of the house cat-sized fox has slowly grown, peaking at about 640 animals in 2005-06 before dropping to around 340 in 2014-15.

This lower number, however, reflected a change in the way the statistical analysis was conducted “and therefore the estimated population abundance was not directly comparable between the years,” according to Harris. The population decline could also reflect deaths due to record cold, snow and drought in the state between the survey periods, she wrote.

The small mammals seem to be slowly spreading out across the state, based on sightings of swift foxes in southeastern Montana.

Predator hunters in southeastern Montana are encouraged to learn the difference between a coyote, red fox and swift fox. That's because the sw…

Voyagers Rest and Gritty Stone fishing access sites have been reopened to vehicle traffic after being closed by Montana Fish, Wildlife & P…

The once-common insect has suffered population declines for decades, and could end up on the endangered species list.

The foxes will be examined, treated for fleas and fitted with GPS collars before being released on the Fort Belknap Indian Reservation in northern Montana.

Swift foxes are mostly nocturnal animals, spending most of the daytime in their dens.

A camera trap captured this shot of two swift foxes wrestling in northeastern Montana next to their den.