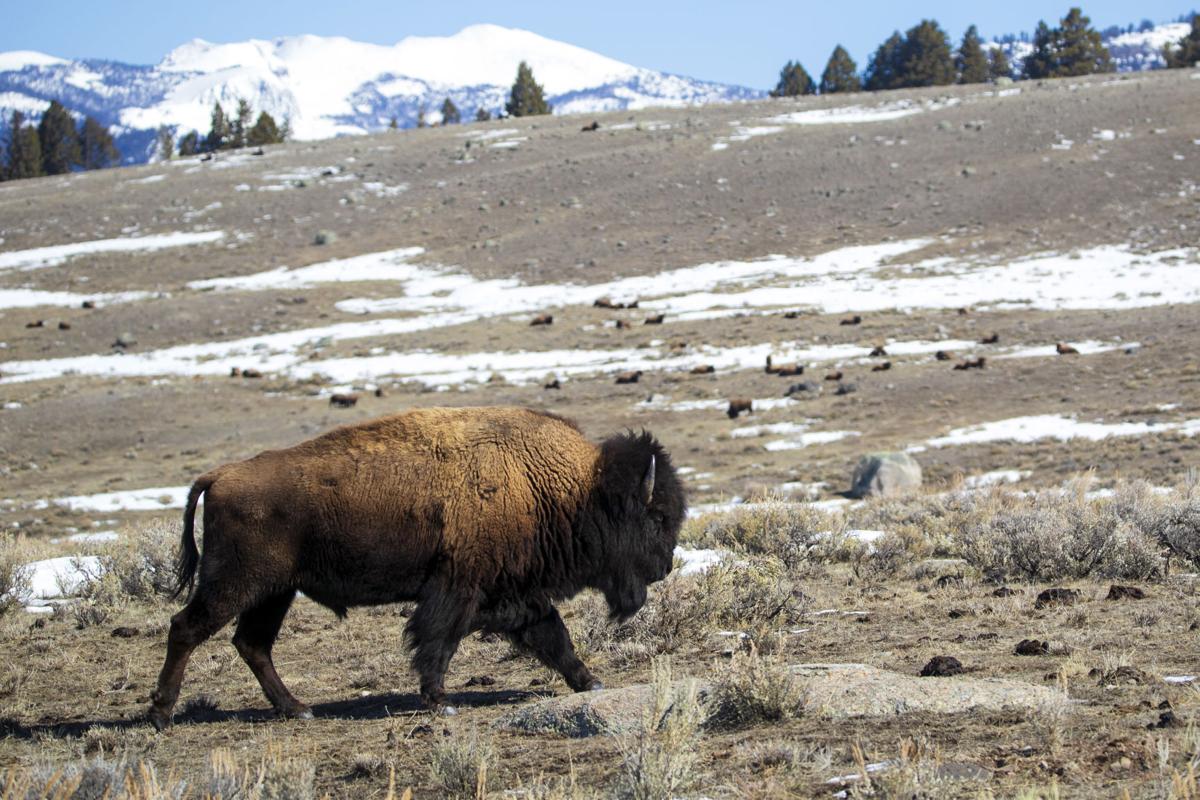 A bison travels past a number of others resting on a hillside at Yellowstone National Park on March 31. What to do with bison carcasses left behind by hunters outside the park has become a difficult dilemma. 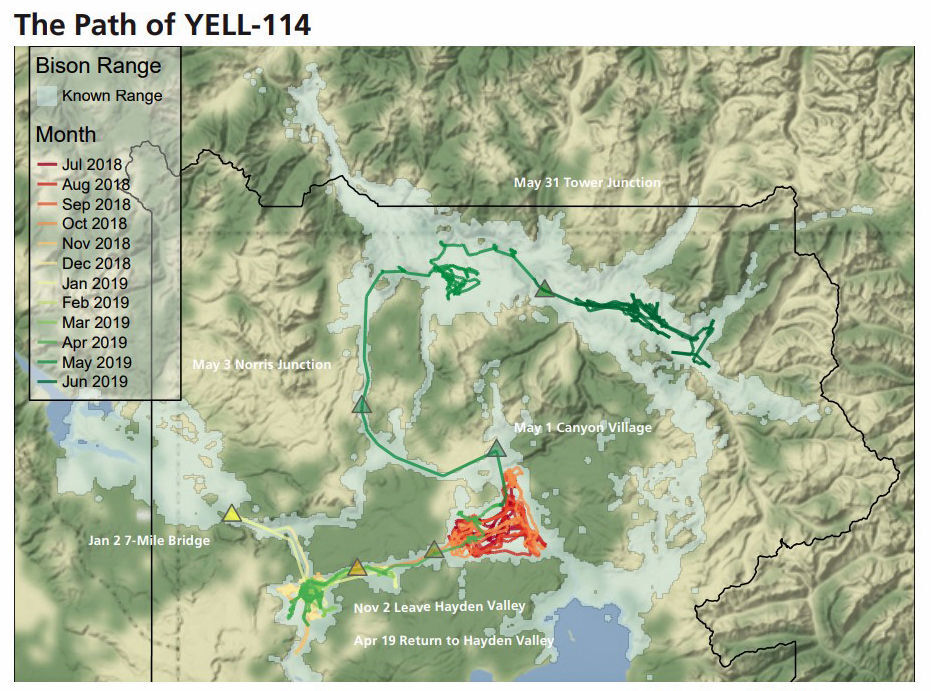 This map shows the travels of a GPS-collared bison cow over the course of one year.

A shared interest in bison migrating into the Gardiner Basin has created a unique partnership.

A group of bison carcass recyclers, known as the Buffalo Bridge Project, has garnered the attention of the InterAgency Bison Management Plan. IBMP is composed of federal, state and tribal officials who work together on Yellowstone bison management issues, and assisted in some of their tasks by members of conservation groups.

Since 2013, Buffalo Bridge has provided a unique service in the Gardiner Basin by scavenging bison hides, hooves, heads, ribcages, fat and internal organs from bison that hunters kill. From the scraps the members make bison jerky and bone broth. They also can internal organs like heart meat and make clothing and decorations.

“Hunters can’t fathom that a bunch of white people are coming out with sleds and don’t want anything,” project member Epona told the Gazette in a 2016 story. “Hunters expect us to want money. That’s part of what makes this so special, that we’re just friends having fun.”

The winter of 2019-2020, Buffalo Bridge Project didn’t visit the Gardiner Basin after losing its campsite. This winter the Custer Gallatin National Forest offered to let the group stay at a Forest Service day-use site for four weeks.

“We tried something, stepped out a little bit, with the Buffalo Bridge group,” said Mike Thom, Gardiner District ranger, during the IBMP's April meeting.

The group has agreed to provide Thom with a summary regarding how many people joined the project and how many bison carcasses they helped clean up, so he can assess if it was worth it to authorize their extended stay on national forest.

“There are pros and cons in this,” he added.

An alternative to Buffalo Bridge Project’s cleanup work is the operation of a carcass trailer — essentially a dumpster on wheels that would be loaded with hunter-killed bison remains to avoid attracting and concentrating predators and animal scavengers to the region.

The Greater Yellowstone Coalition has agreed to raise the money to purchase a $10,000 to $15,000 dumpster setup, depending on the size. The IBMP is not sure now how to move forward.

Gardiner resident Nathan Varley, a member of the Bear Creek Council, said the membership was surveyed they were divided about a solution to the concentration of bison carcasses near Beattie Gulch and Eagle Creek. About one-third think the carcasses should be left on the landscape for critters to recycle. Another third say they should be cleaned up, but don’t want the communities to do it. Some people want to help clean up and use the carcass trailer.

“We ran into a diversity of ideas,” he told the IBMP.

"It's difficult to know what is the best thing to do to clean up the carcasses accumulating in these small areas," Varley said in an interview. "Dispersing hunters would be ideal," but that's a whole different issue and discussion.

Until someone can take ownership of the dumpster and the work to pick up carcasses, the idea is at a standstill, said Shana Drimal, a wildlife program associate for the Greater Yellowstone Coalition.

“We talked to the folks at the Buffalo Bridge Project,” Varley said. “We like their work.”

He especially likes that they return unused portions of the carcasses back to the landscape, rather than having them go to a nearby landfill.

"The best place to recycle it is in place," he said, although opponents to the concentrated bison hunts have disagreed and even filed a lawsuit to halt them.

So now the question arises: Will Buffalo Bridge’s carcass recycling work take on an expanded, more formal role in the Gardiner Basin?

“They are very open and willing to see where they can help,” Thom said, but he didn’t approach them about taking on the carcass trailer task.

She noted that Buffalo Bridge earns praise from hunters and locals regarding their work, but they are only there for a short time.

“Why don’t we train some local people to clean up a bit?” she said.

Tribal hunters account for the majority of bison killed when they migrate out of Yellowstone into the Gardiner Basin in late winter and early spring. This year the seven tribes accounted for 170 bison kills as of the end of March. In 2016, hunters killed more than 360.

“We’re here for the buffalo, to honor them and make use of everything we can,” Russell said in 2016.

Considering that bison once migrated long distances across the Great Plains, it should be no surprise that they cover more distance in a year than any other hoofed mammal in Yellowstone National Park.

That became evident after biologists put a GPS collar on a cow bison in Yellowstone in July 2018. During the course of a year the bison, known as YELL-114, covered 900 miles — roughly the distance from Gardiner to Fargo, North Dakota.

YELL-114 spent the summer of 2018 — the breeding season – in the Hayden Valley hanging around roughly the same five-mile region. On Nov. 2, 2018, as winter threatened, she lumbered over the Mary Mountain Trail to the geyser basins north of Old Faithful where she spent much of the winter, raising her step count to about 500 miles.

In April 2019 the cow returned to the Hayden Valley, continuing north up the Grand Loop Road to arrive at Canyon Village a month later. From there she walked on to Norris and then Mammoth Hot Springs before turning to travel east to Tower Junction by the end of May. By June 31, YELL-114 was grazing her way through the Lamar Valley.

BEATTIE GULCH — On the mornings when Epona isn’t awoken by gunshots, she can sleep in, her fox fur hat stuffed under the covers to keep her fe…

BEATTIE GULCH — As the American Plains Indians once proved, a single bison can supply a wealth of products, kind of like an ancient and wild W…

It’s a change that gives Wyoming residents who strike an animal the same liberties as people in about 30 other states, including western neighbors Idaho, Colorado and Montana.

Native American lawmakers criticized Montana Gov. Greg Gianforte on Friday over his decision to scrap a bison management plan that would have allowed the wild animals to be restored in more areas of the state.

“Group travel is coming back. There’s definitely a demand and interest for getting back out there.”

A bison travels past a number of others resting on a hillside at Yellowstone National Park on March 31. What to do with bison carcasses left behind by hunters outside the park has become a difficult dilemma. 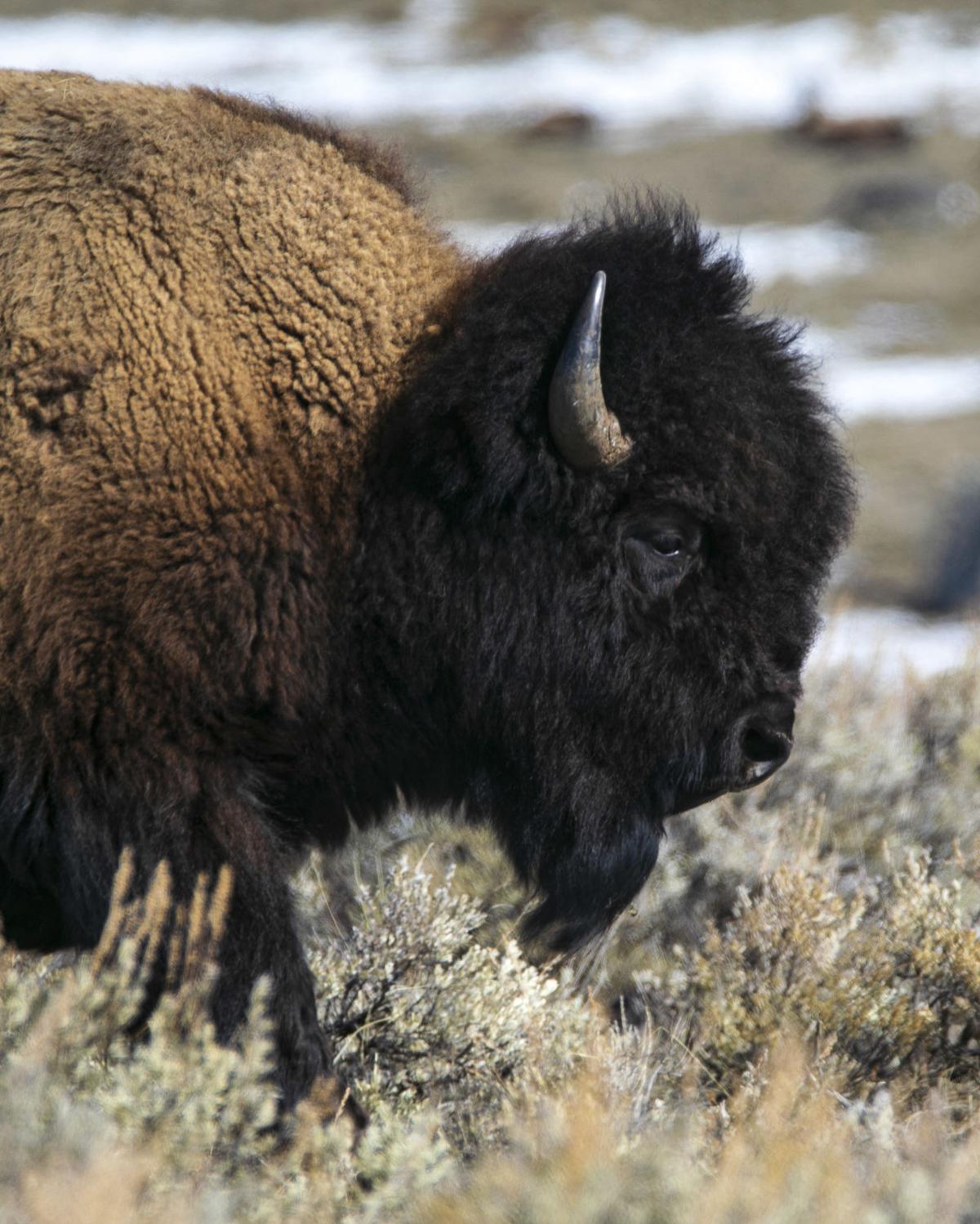 A bison makes its way through sagebrush at Yellowstone National Park. At last count hunters had killed almost 170 bison this year. 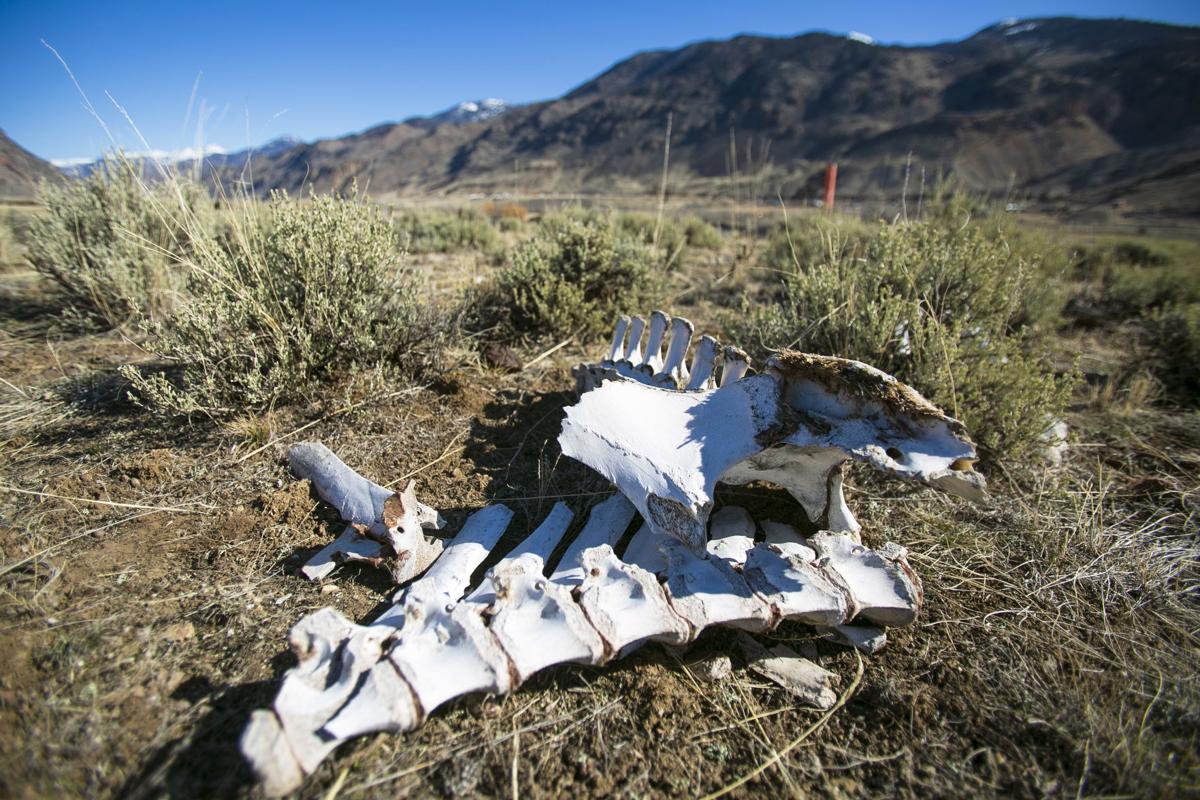 Bison bones bleached by the sun lie in a field just yards from the Yellowstone National Park boundary. 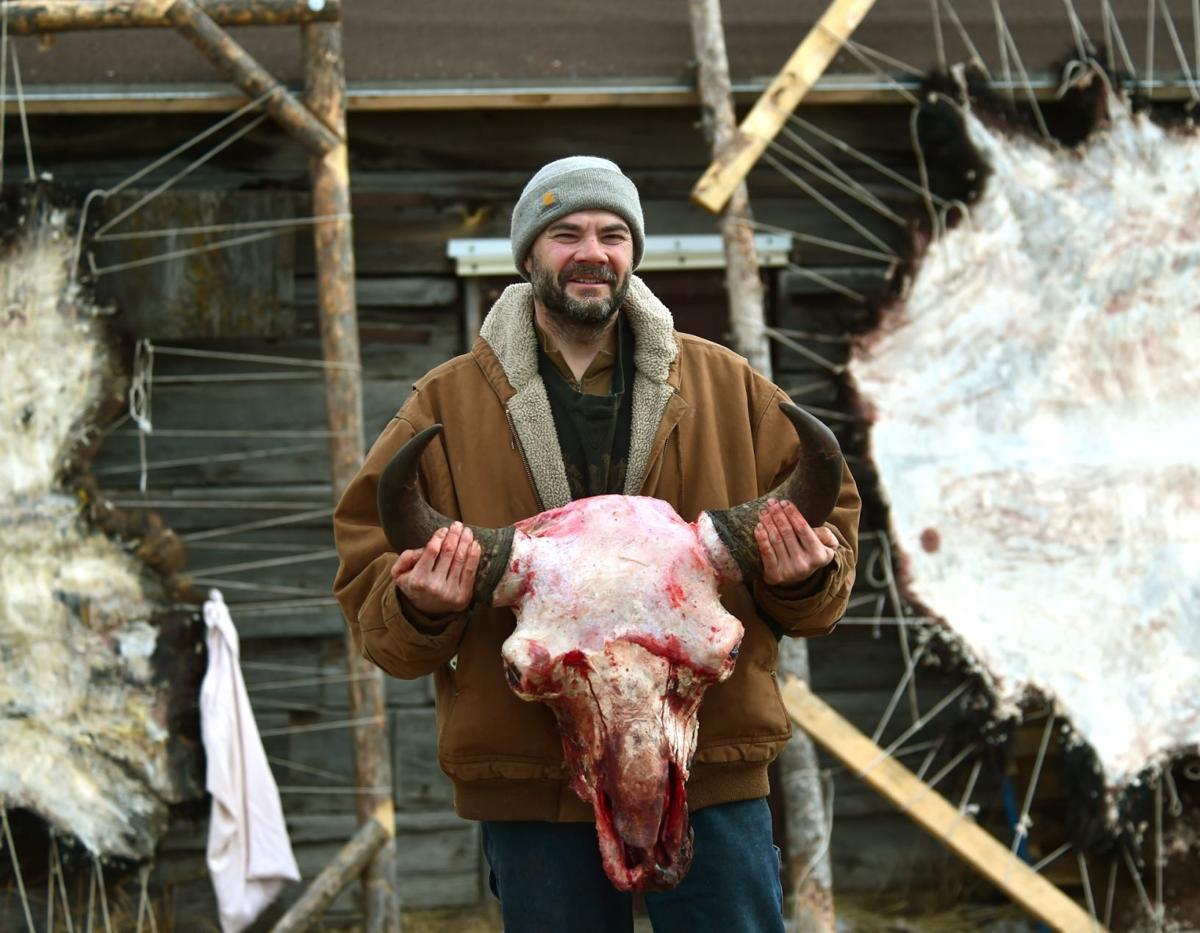 Jerry Moisin holds up a bison skull he skinned while taking part in the Buffalo Bridge Project in 2016. 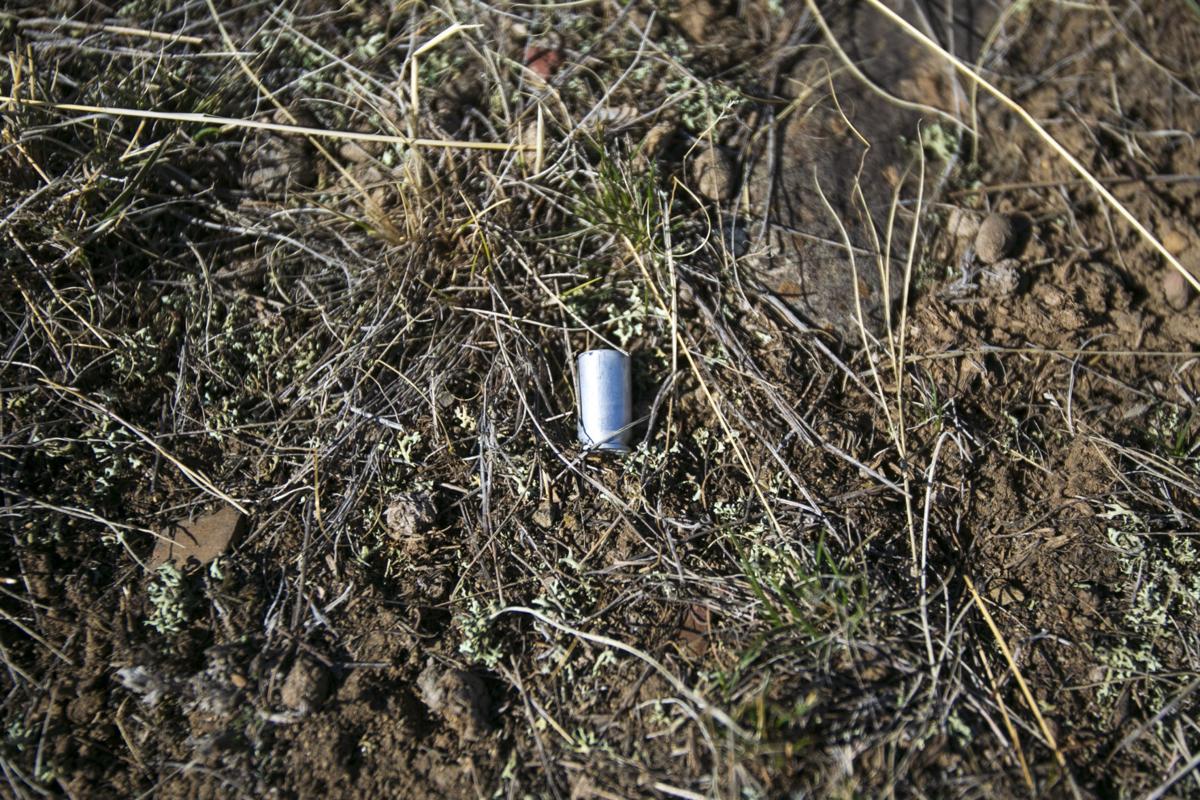 A shell casing lies a few feet outside the Yellowstone National Park boundary where hunters can shoot bison.

This map shows the travels of a GPS-collared bison cow over the course of one year.