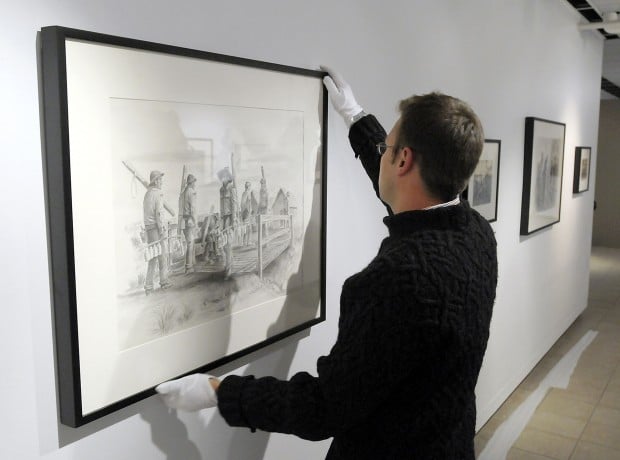 Brandon Reintjes, curator at the Montana Museum of Art and Culture in Missoula, earlier this week hangs one of the drawings included in “War Torn: The Art of Ben Steele,” a collection of 68 drawings and paintings depicting the Billings veteran’s experiences during World War II. The exhibit on the University of Montana campus will be on display through Nov. 19. 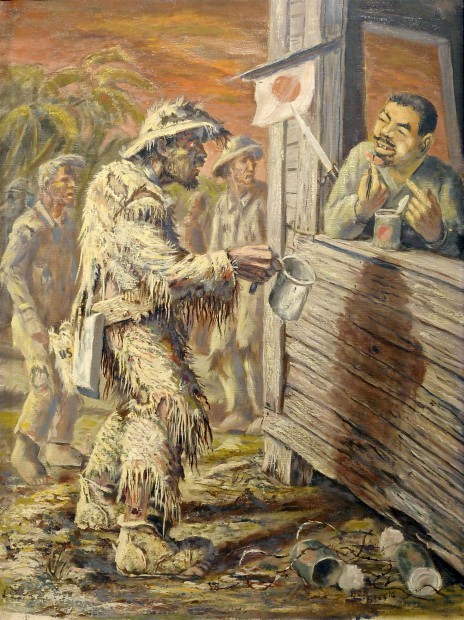 Ben Steele’s “Men and Rice, or The Beggars,” oil on canvas, circa 1950, is one of his images from the Bataan Death March on display at the University of Montana’s Museum of Art and Culture. Most of Steele’s 11 oil paintings and 78 charcoal drawings of the Death March, which he witnessed firsthand, are part of the state-owned museum’s permanent collection.

﻿MISSOULA — Ben Steele recalls the faces of the dead and dying along the roadside as he marched with thousands of other American prisoners of war from the Bataan Peninsula to the city of Capas in the Philippines. He remembers the bits of fire-pit charcoal that he squirreled to his prison cell and used to draw pictures of his beloved Montana on the floor. He remembers the coal mines of Japan, and even his hazy visits to death’s doorstep.

“I have very vivid memories of what went on, because it was a gruesome and difficult situation,” said Steele, who at 94 is one of the last remaining survivors of the infamous Bataan Death March in which Japanese soldiers forced more than 75,000 malnourished, exhausted, injured and sick American and Filipino prisoners of war to march more than 60 miles over the course of less than a week, leading to the deaths of thousands of prisoners.

“I have lots of images in my head,” said Steele, of Billings. “I could paint them for the rest of my life. I don’t have trouble recalling anything in there; I can recall dates in the camp that I can’t remember in my normal life since. I was impressed very deeply by it.”

In the decades since World War II ended, Steele’s memories — translated to 11 oil paintings and 78 stark charcoal drawings — have taken on a fame of their own, not only because they are among the only images that exist of the march, but also because of their raw emotional power.

A number of the images were featured in “Tears in the Darkness,” a best-selling 2009 book about the march by Elizabeth and Michael Norman that features Steele as a central character.

Now, the vast majority of Steele’s images from the Bataan Death March are on display at the University of Montana’s Montana Museum of Art and Culture, where they have come to reside as part of the state-owned museum’s permanent collection.

“These images form such an important part of Montana’s cultural history,” said Brandon Reintjes, curator at the MMAC. “They have almost a mythic back-story to them, they convey such a powerful and important lesson in history, and they’re truly a reflection of a powerful artistic vision that I think inspires everyone who encounters them.”

“War Torn: The Art of Ben Steele,” a collection of 68 drawings and paintings, opened Friday night and will remain on display through Nov. 19.

“These paintings speak for themselves on so many levels,” Reintjes said. “His story is pertinent to military history, certainly. But it’s also about overcoming these deep-seated hatreds he developed as a prisoner of war. That underlying text of reconciliation and peace and the power of art as a healer is something that I think can connect to anyone, whether they have been directly exposed to war or not.”

After entering the U.S. Army Air Corps at age 22, Steele found himself caught up in one of the first and most protracted land battles of the war in the Pacific, as U.S. and Filipino forces attempted to defend the peninsula of Bataan in the Philippines. The 99-day battle ended with the surrender of 76,000 U.S. troops, including Steele. It was one of the worst defeats in American military history.

Steele survived the legendary Death March and spent 3-1/2 years as a prisoner of war in the Philippines and Japan. Crippled by dysentery, pneumonia, malaria, blood poisoning and beriberi, Steele came so close to death that he was read his last rites by priests on two occasions.

To maintain his sanity, Steele began drawing — first employing nothing but a charred stick on the bare concrete floor, and later on paper that fellow prisoners supplied him.

“I was awful sick and I thought I was going crazy, so I had to do something to occupy my mind,” he said. “So I started to draw on the floor.”

At first, Steele drew images of cowboys and mountain scenes from his home state of Montana. In an earlier interview with Reintjes, Steele described the depth of his longing for home during that time.

As other prisoners began to take notice of Steele’s pastime, they suggested he draw what he saw around him. So Steele began creating depictions of life in the camp — at first on the floor; then on paper, with pencils that were smuggled to him.

Steele was later transported to Japan, where he worked as a forced laborer in coal mines. During that time, he was kept too busy to draw.

In 1945, he was finally liberated. But his drawings were lost.

“When I went to Japan in ’44, I left the drawings with a chaplain, thinking he would get out when the Philippines were retaken,” Steele said. “But when he did get out, the ship he was on was sunk by the American Navy, so the drawings went down in the China Sea.”

During his yearlong recuperation at a hospital in Spokane, Wash., Steele re-created the lost drawings and several paintings.

“I hated to lose those drawings, but I was lucky to get home in one piece myself,” he said. “So it didn’t bother me all that much, and it gave me something to do during my recovery.”

Following his recovery, Steele pursued a degree at the Cleveland Institute of Art, where he studied with noted artists George Grosz, Hans Mueller and Clarence Van Duzer. After receiving teaching credentials from Kent State University and a Master of Art degree from the University of Denver in 1955, Steele became a professor of art at Montana State University Billings.

But Steele continued to devote himself to a creative aesthetic that emphasizes realism, brutal as it may be. He created several more images from the Death March — images that he considers his most important works.

“I kind of felt an obligation to the guys who went through that, to illustrate what went on over there,” he said. “I wanted to tell the story.”

In that sense, Steele knows he is different from many World War II veterans, who on the whole were notorious for their reticence about speaking of what they had experienced on the battlefields of the Asian and European theaters.

But, he said, opening up about his experiences was an important step in his own life.

“I didn’t talk about my experiences for years, and I have friends who won’t talk about it still,” he said. “But when I did all these artworks, it kind of opened me up because I had to explain them. It got me to talk about it very freely. I didn’t have any choice but to talk about it after I did the artwork. I think it helps you to talk about it. Some people ask me how I can draw that stuff, but it’s very easy because it’s so vivid in my mind.”

The Montana Museum of Art and Culture presents "War Torn: The Art of Ben Steele," a collection of 68 drawings and paintings depicting Steele's experiences during World War II, at the Paxson and Meloy Galleries in the PAR/TV Building on the University of Montana campus. The exhibit will remain on display through Nov. 19.

A number of other related programs will take place during the exhibit. They include:

-- A short course titled "Surviving Bataan: The Art of Ben Steele" featuring the exhibition and the book "Tears in the Darkness," instructed by Dr. Herbert Swick and Keith Hardin; 9-10:30 a.m. Fridays, Oct. 14, 21, and 28 with special guest Ben Steele.

-- A lecture and book signing by Michael and Elizabeth M. Norman, authors of "Tears in the Darkness," at the PAR/TV Center's Montana Theater with special guest Ben Steele, on Thursday, Oct. 27 at 7 p.m.

-- "War Poetry: Poetry is in the Pity," a Humanities Montana Speakers Bureau program by Lisa Simon, UM professor of English, in observance of Veterans Day in the PAR/TV Center's Montana Theater, on Thursday, Nov. 10 at 5:15 p.m.

Digital director at the Billings Gazette.

Original oil paintings and drawings by Ben Steele, a prisoner of war who survived the Bataan Death March, are being shown in Billings.

Brandon Reintjes, curator at the Montana Museum of Art and Culture in Missoula, earlier this week hangs one of the drawings included in “War Torn: The Art of Ben Steele,” a collection of 68 drawings and paintings depicting the Billings veteran’s experiences during World War II. The exhibit on the University of Montana campus will be on display through Nov. 19.

Ben Steele’s “Men and Rice, or The Beggars,” oil on canvas, circa 1950, is one of his images from the Bataan Death March on display at the University of Montana’s Museum of Art and Culture. Most of Steele’s 11 oil paintings and 78 charcoal drawings of the Death March, which he witnessed firsthand, are part of the state-owned museum’s permanent collection. 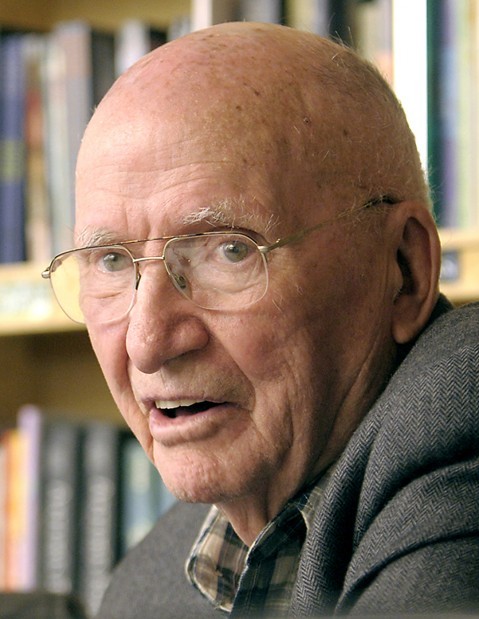