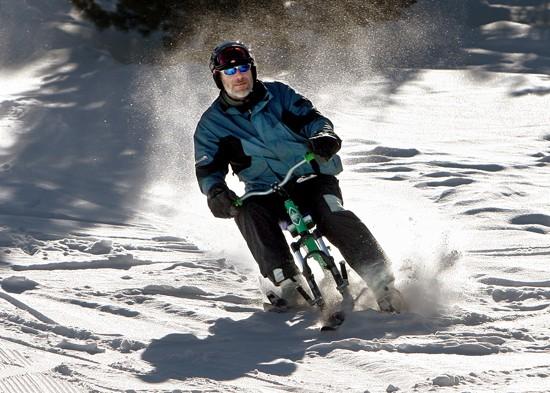 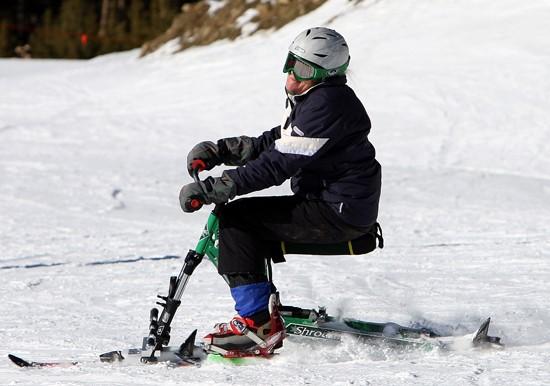 Ellyn heads through the powder, powered by the "ShroomBob Chanterellyn II" that her husband, Bob, designed after she was injured in an accident. 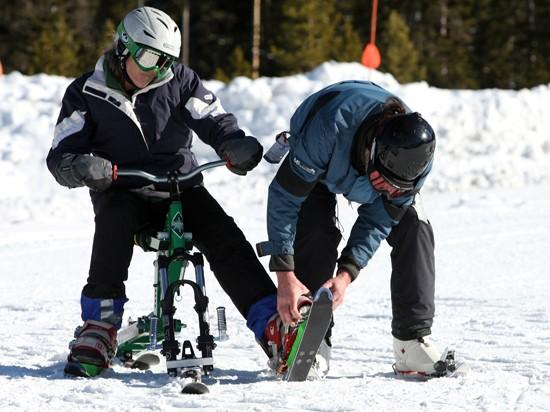 Ellyn Kolesar gets some help into her shoe ski from husband Bob as their prepare for a run on the modified skibob that Bob designed.
BRETT FRENCH Of The Gazette Staff

In the obscure sport of skibobbing, Bob Kolesar is hoping to carve out a niche, however small.

"One of the things we're trying to convince people is that it's fun," he said. "That's one of the problems we have in marketing."

Although always nipping at the edges of popularity, the item variously known as a skibob, snowbike, skibike and Sit-Ski has never attained mass appeal in the United States despite repeated attempts. Many ski areas don't even allow them on their hills.

But Kolesar sees a special place for inventions like his in adaptive ski programs, such as Eagle Mount. His reasons are personal.

Kolesar's wife, Ellyn, suffered a head injury in a 35-foot fall in 1989 while hiking in the Pioneer Mountains. The fall left her weak on her left side. Attempts to reintroduce her to skiing with a walker-like device through Eagle Mount's program were frustrating, Kolesar said.

"It's very hard to control a person in a walker," Kolesar said. "I had loftier goals than my wife being belayed off the mountain. It seemed to me there was so much more you could with a skibob."

An attorney with a chemical engineering degree, Kolesar set about designing his own skibob frame. The result is his ShroomBob Chanterellyn II, named in honor of his wife with a nod toward mushrooms, which he unveiled last year at Bridger Bowl.

"A quarter of the way down her first run on Alpine, she was controlling the skibob so we stopped using the belay," he said. "This is an important rehabilitation device, but it's not often used."

"It's so easy, Ellyn, who has a closed head injury, could ski before she could walk again," Kolesar said. "It just comes pretty automatic."

Kolesar's invention has caught the attention of Eagle Mount in Bozeman.

"That concept facilitates a more positive experience for people like Ellyn," said Bridget Tanner, Eagle Mount's Bridger Bowl ski program director. "It's a great device for Ellyn and gives her more stability. It's definitely added some ease to her day."

Tanner even tried out one of the skibobs.

"It's great," she said. "Bob's bike is a very smooth ride. It's evident he spent a lot of time and effort developing it."

Dashing through the snow

Skibobs are balanced and stopped by small foot skis the rider wears, providing three points of contact with the snow. Skibikes, on the other hand, have foot pegs allowing riders to pick up their feet. As a consequence, they're less stable and trickier to ride. Kolesar's skibob features both, allowing riders to choose their style. His bike also has a heavy-duty Rock Shox front fork, allowing the rider to control the stiffness of the shock absorber. The shock system allows 6 to 8 inches of travel to absorb bumps.

"The suspension dramatically reduces the amount of skill you need to ride through most of the bumps," Kolesar said.

Kolesar's skibob features one ski in the front and one in the back. They're children's skis with bindings and fit into a molded plastic "boot," allowing riders to change out skis if they're broken, or if they want to upgrade to a different ski. It also allows for disassembly for transport. Kolesar notes that a broken ski can easily be replaced with a rental, as well.

"It allows you to get a lot of different ski technology," he said.

The aluminum frame of the bike is custom-made by Midwest Welding in Bozeman. All together, the skibob weighs 42 pounds, about as much as a downhill mountain bike. Because the bikes are customized, buyers can pick out the type of skis, bindings, the front fork and even the design and color of the seat.

The technology doesn't come cheap. Kolesar is charging $5,000 for a bike or $3,500 for adaptive skiing groups like Eagle Mount.

Unlike smaller skibikes, Kolesar's skibob sits high enough to load simply onto most chairlifts without the rider getting off the skibob's seat.

Showdown, Great Divide, Whitefish, Turner and Blacktail are the only ski hills in Montana listed as allowing skibobs and skibikes, according to the American Ski-Bike Association's Web site.

When asked if she thought skibobs ought to be allowed at all resorts, Tanner was diplomatic.

"There's a varied opinion on that," she said. "I think it's up to the individual ski areas."

Skibobbing can trace its roots back to the mid-1800s in the European Alps when a wooden, bicycle-like contraption was fitted with skis, according to the Web site ski-bike.org. It wasn't long before inventors seized upon the idea, and a multitude of variations were produced in a wide array of styles. A German version even included rockets.

By 1949, Engelbert Brenter, an Austrian ski manufacturer, filed a patent on his unique version that included a suspension, and a new company was founded. As well as making them, Brenter's bike set a speed record of 125 mph. Brenter is still producing Snowbikes, although at least 70 other makers have fallen along the way over the years as the sport has struggled for acceptance.

The newer 20-pound version of Brenter's Snowbike is seeing an upsurge in interest, especially from younger riders. Montana's Showdown ski hill has rented Brenter bikes for about 10 years, according to owner George Willett.

"They are so foreign to everyone," he said. "But everyone who tries them has a great time with them. After one lesson, you can negotiate any of the blue trails."

At 68, Willett said he still enjoys riding them, as well as skiing.

"We have some regulars on it who have a little bit of a knee problem," he said. "There's a Butte guy with a fused ankle who flies all over the mountain on one to watch his grandkids.

"It's a real cool apparatus to use," he added.

Showdown requires a two-hour lesson before renting the snowbikes, to teach how to turn, stop and load the equipment on a chairlift. The cost is $65 for the rental and lesson. After that, the bikes rent for $30.

True snowbikers - those who place their feet on pegs instead of skis - are like the snowboarders of yesteryear - struggling to gain attention for an unusual sport. They're hoping the Winter X-Games may take note and include them in competition as a means to launch interest in the sport.

For Kolesar, although fun is at the heart of the sport it's also much more. His skibob has allowed him to ski the slopes with Ellyn once again.

"It's more than just fun," Kolesar said. "Instead of just fun, it's a big step. Ellyn can ski on her own."

Ellyn heads through the powder, powered by the "ShroomBob Chanterellyn II" that her husband, Bob, designed after she was injured in an accident.

Ellyn Kolesar gets some help into her shoe ski from husband Bob as their prepare for a run on the modified skibob that Bob designed.
© Copyright 2021 Billings Gazette, 401 N Broadway Billings, MT | Terms of Use | Privacy Policy
Powered by BLOX Content Management System from TownNews.com.
You don't have any notifications.