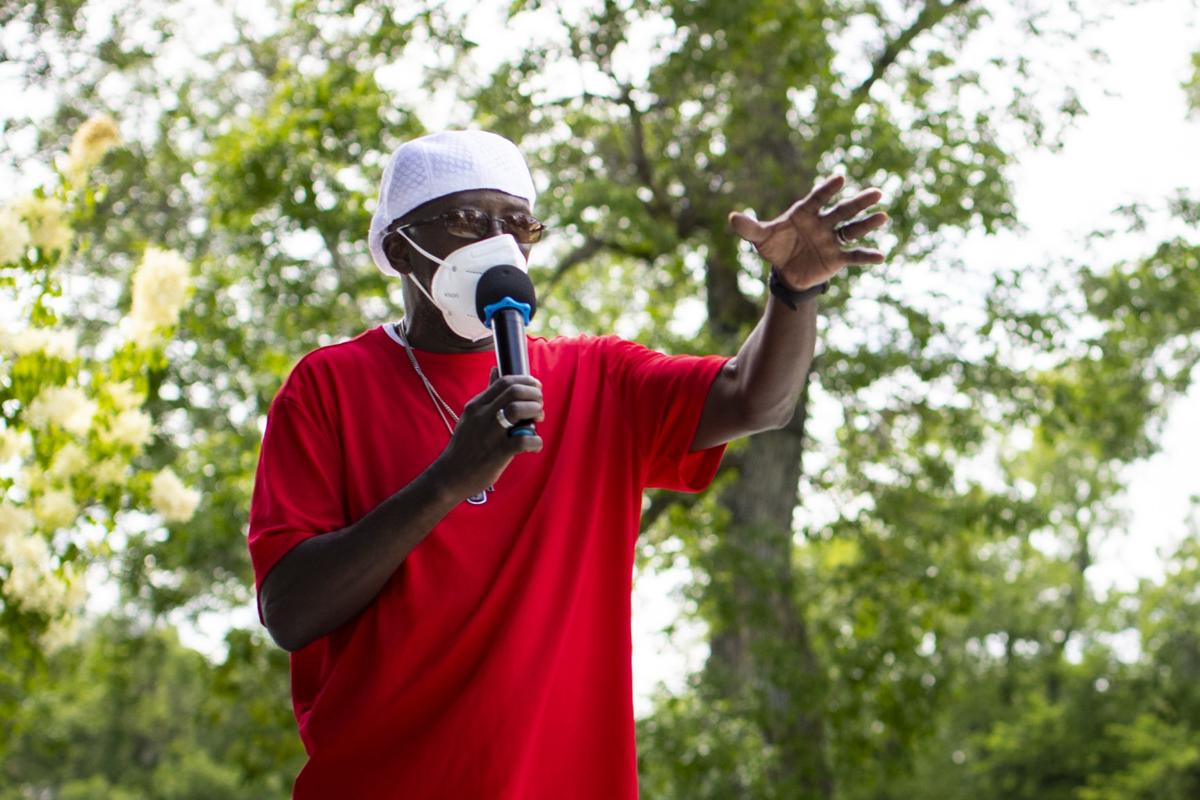 Pastor Tracy Starr speaks at the Juneteenth celebration hosted by the Black Heritage Foundation of Yellowstone County at South Park in Billings on Saturday. 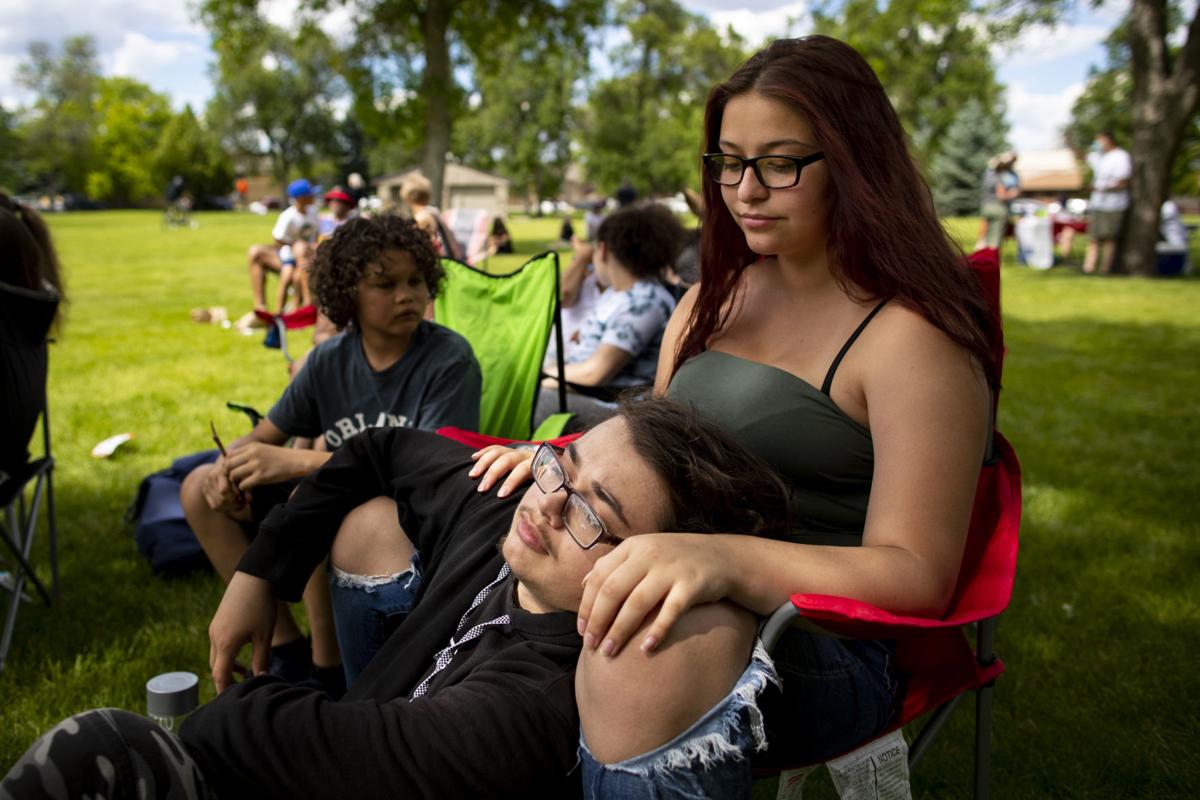 Caden Streitz relaxes with Teqahmarie Reichert during the Juneteenth celebration hosted by the Black Heritage Foundation of Yellowstone County at South Park in Billings on Saturday, June 20, 2020.

Dozens of people sat in the pockets of shade at South Park Saturday for music, a free meal and a history lesson.

Juneteenth, the holiday commemorating the day in 1865 when the last enslaved Black Americans learned of their freedom, drew both the South Park gathering and a march downtown. Around the country, the holiday following the nationally condemned deaths of George Floyd and Breonna Taylor has given it a renewed significance.

“People are not really interested in their ancestry or history, until something comes up that would cause them to want to know more,” said Rev. Melvin Terry, who grew up in Billings and is the president of the Black Heritage Foundation of Yellowstone County.

In Billings, the day has been celebrated at its South Side location by the Black Heritage Foundation since 2002, 15 years before Montana would add the holiday to its calendar. Hawaii, North Dakota and South Dakota are the only remaining states that do not recognize the date.

“We’re seeing a real push lately from people who want to learn more. The protest that we had a couple of weeks ago, we haven’t seen that many people come together in Billings ever, I want to say. For me, it was really exciting to see so many people who just seemed to wake up all of sudden,” Terry said.

Robert Brown, one of the speakers for the event, explained what happened on June 19, 1865.

“The Union army, led by General Granger, came into Galveston, Texas. When he got there, he found out that Texas still had slaves. This is two-and-a-half years after the Emancipation Proclamation had been signed,” Brown said.

Granger brought to Galveston copies of the Emancipation Proclamation and the 13th Amendment, effectively ending slavery in Texas since it won its independence from Mexico in 1836. The institution had been conditionally abolished in all Mexican territories seven years prior.

“The history books only want us to remember the Alamo. That’s not something that I want to remember,” Brown said.

The holiday that would become known as Juneteenth began in Texas spread through the United States. Melvin Terry, who worked in Texas as a police officer, said he didn’t learn about Juneteenth until he moved to Dallas. Terry said the Juneteenth celebrations there lasted through the weekend.

“It can be a real downer to not be aware of who you are, or where you came from. At the Black Heritage Foundation, we just want to education people. One by one…The same way that people have a hunger for food, they can have a real knowledge for heritage,” Terry said.

Since joining the Black Heritage Foundation, Terry joined state legislator Margie MacDonald in pushing the Capitol to recognize the holiday. MacDonald, who also spoke Saturday, had no knowledge of the day’s significance until after her election.

Terry said the past month has galvanized people in and out of Billings. What he’s seen, he said, is akin to the dream of Martin Luther King, “with black boys, white girls, white boys and black girls sitting down at a table of brotherhood and speaking out.”

A few blocks away from South Park, at the same intersection that saw hundreds turn out for the June 6 rally against excessive police force against people of color, nearly two dozen people assembled again.

“There’s a huge blind spot, especially when it comes to Black history,” said Alexis Cooper, who spoke at the June 6 rally and helped to organize the march. “For brown people, when you’re a kid, you grow up with questions. ‘Where do I come from?’ Where do I fit in this part of history?’”

Cooper, 19, said it wasn’t until junior high that she learned about Juneteenth. Saturday marked the first time that she came to the annual event in South Park. At the Yellowstone County Courthouse, cars honked as those gathered echoed the same chants heard two weeks prior:

The recognition of the history of Black Americans, Cooper said, is a part of the wave of demonstrations and activism seen during the past month.

“It’s part of a wave of powerful emotion, and it’s not a conservative vs. liberal thing. It’s humanity vs. racism.”

The finished piece will show five distinct scenes in the history of the civil rights struggle in the United States.

When Pamela Conner saw the video of George Floyd's killing, she wasn't surprised.

The first steps of the popular Mystic Lake trail in the Beartooth Mountains will look different this year.

Pastor Tracy Starr speaks at the Juneteenth celebration hosted by the Black Heritage Foundation of Yellowstone County at South Park in Billings on Saturday.

Caden Streitz relaxes with Teqahmarie Reichert during the Juneteenth celebration hosted by the Black Heritage Foundation of Yellowstone County at South Park in Billings on Saturday, June 20, 2020.