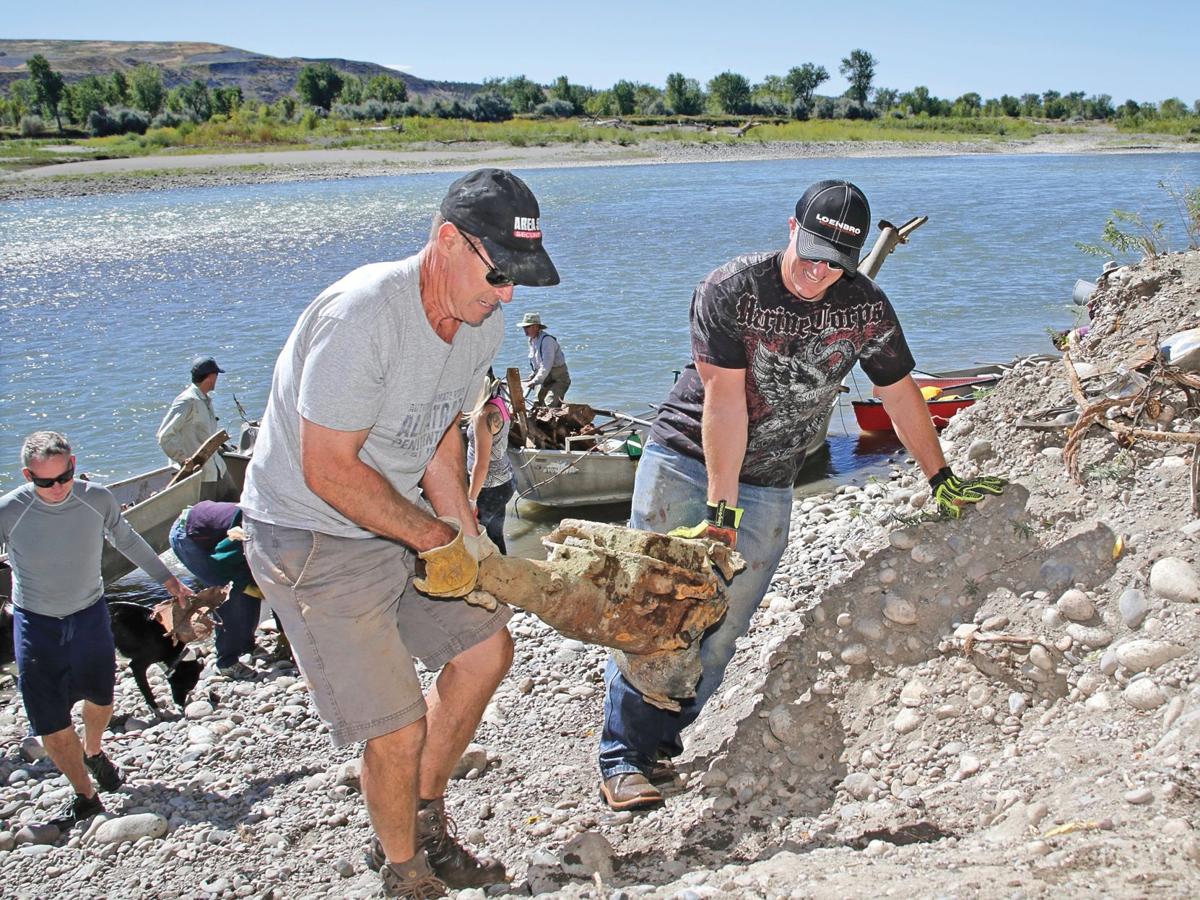 Scott Alexander and Daniel Osborn carry a vehicle transmission that was pulled from the Yellowstone River on Saturday during the 10th annual cleanup event. 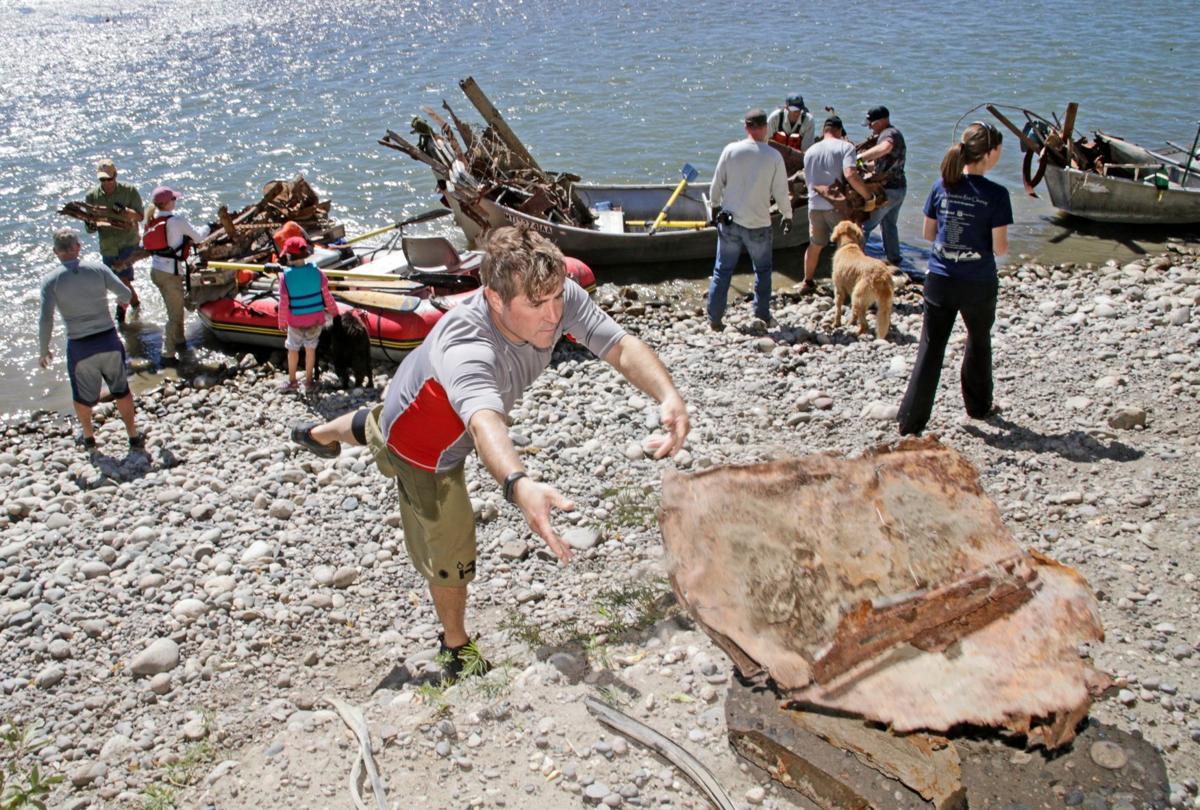 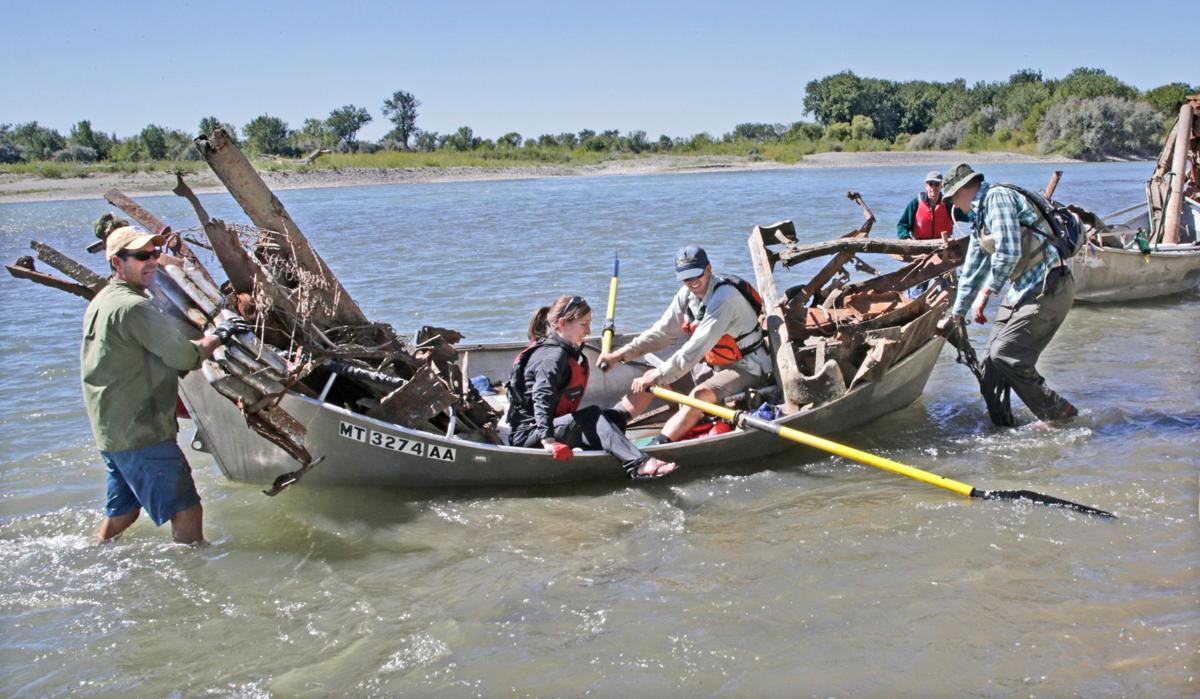 Scott Alexander and Daniel Osborn carry a vehicle transmission that was pulled from the Yellowstone River on Saturday during the 10th annual cleanup event.

Organizer Kayhan Ostovar noticed two things Saturday when he and a cadre of volunteers floated down the Yellowstone River for the 10th annual river cleanup.

First, there appeared to be less trash on the waterway, he said, standing on Norm’s Island at a spot overlooking the river. And the reason for that might be due to his second observation.

The day started early Saturday, with 30 volunteers in 15 drift boats, canoes, kayaks and rafts setting out from the Duck Creek bridge. The volunteers, RMC professors, environmental students and community members, stopped at Norm’s Island halfway through their day to unload and sort a load of trash and eat lunch, and then continue to the East Bridge fishing access by MetraPark.

An additional 70 volunteers fanned out in parks along the river to pick up trash, and some helped sort and organize trash from the water. The event was sponsored by RBC Wealth Management in Billings, Phillips 66, ExxonMobil, Billings Clinic and St. Vincent Healthcare.

Ostovar predicted the group would collect about 7,000 pounds of metal to recycle, plus three-dozen tires, plastic sacks and a variety of other kinds of junk. That's about average for the annual project, he said.

Much of the metal comes from old, rusted cars that have been used as rip-rap. Unlike the past, this year, the volunteers had to scour the riverbanks for metal, ripping it out when they found it and digging up refuse from the ground.

“I think we’re making a small dent,” he said.

This was Rocky sophomore Katherine Blackford’s second year helping with the cleanup. She was surprised her first time out at how much detritus the river gave up.

“We had full cars on some of the drift boats, and that opened up our eyes to how there is this much stuff in the river right now, and this is a rally important resource,” she said.

Because freshmen new to the program filled the boats this year, Blackford helped shuttle the first-time volunteers to their boats and unload the trash at the stopping points. Looking toward the future, she’s sees the importance of days like Saturday.

“I would like my kids to see the Yellowstone in a healthy condition someday.”

It was the third year for Megan Poulette, assistant professor of environmental science and botany, who also is director of the Yellowstone River Research Center. She’s pleased that the students get exposure to problems and solutions in the environment.

“One of the things we like to do with our new students is familiarize them with their environment and what some of the big concerns are," Poulette said. "So I think it’s a great experience for them.”

Mike Penfold, volunteer conservation program director with Our Montana, said the nonprofit has taken part in the cleanup for several years.

“This year is particularly interesting to me because we’re not seeing a lot of fresh trash, which is a good thing,” he said. “It kind of indicates that people are being tidier along the river.”

Penfold is concerned with the dangerously low level of the Yellowstone. Some of the boats had a difficult time navigating parts of the water on Saturday.

He estimates the river was two feet lower than it was a year ago. The stress that puts on the river causes biologic damage that leads to such problems as the recent fish kill, Penfold said.

The Yellowstone River is an economic driver, used for recreation, farming, industry and to provide drinking water to communities all along the way.

Rocky Mountain College will offer a spring semester class titled “Tropical Ecology – Conservation in East Africa,” which will include a two-we…