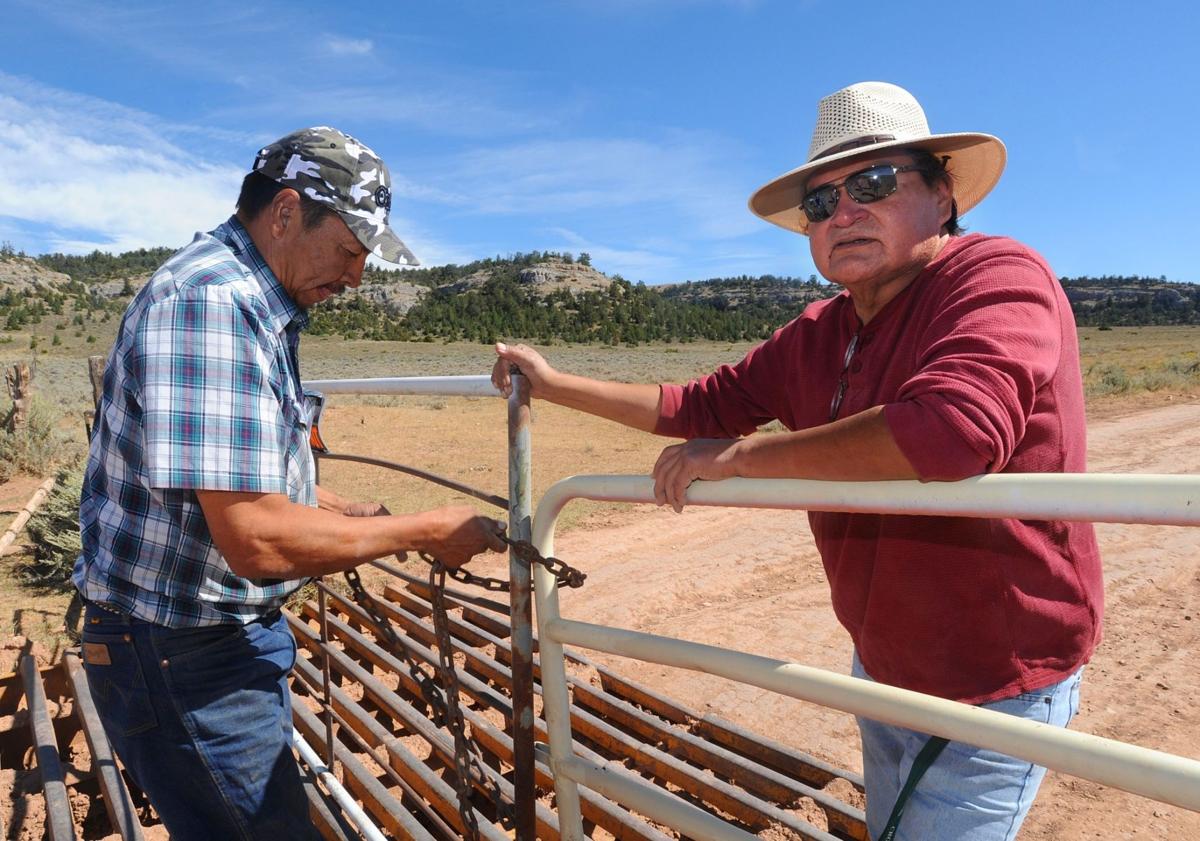 Crow Tribe members Buddy Brown and Elias Goes Ahead barricade the Sage Creek Road access to the Pryor Mountains in a dispute over access across their lands on Wednesday. 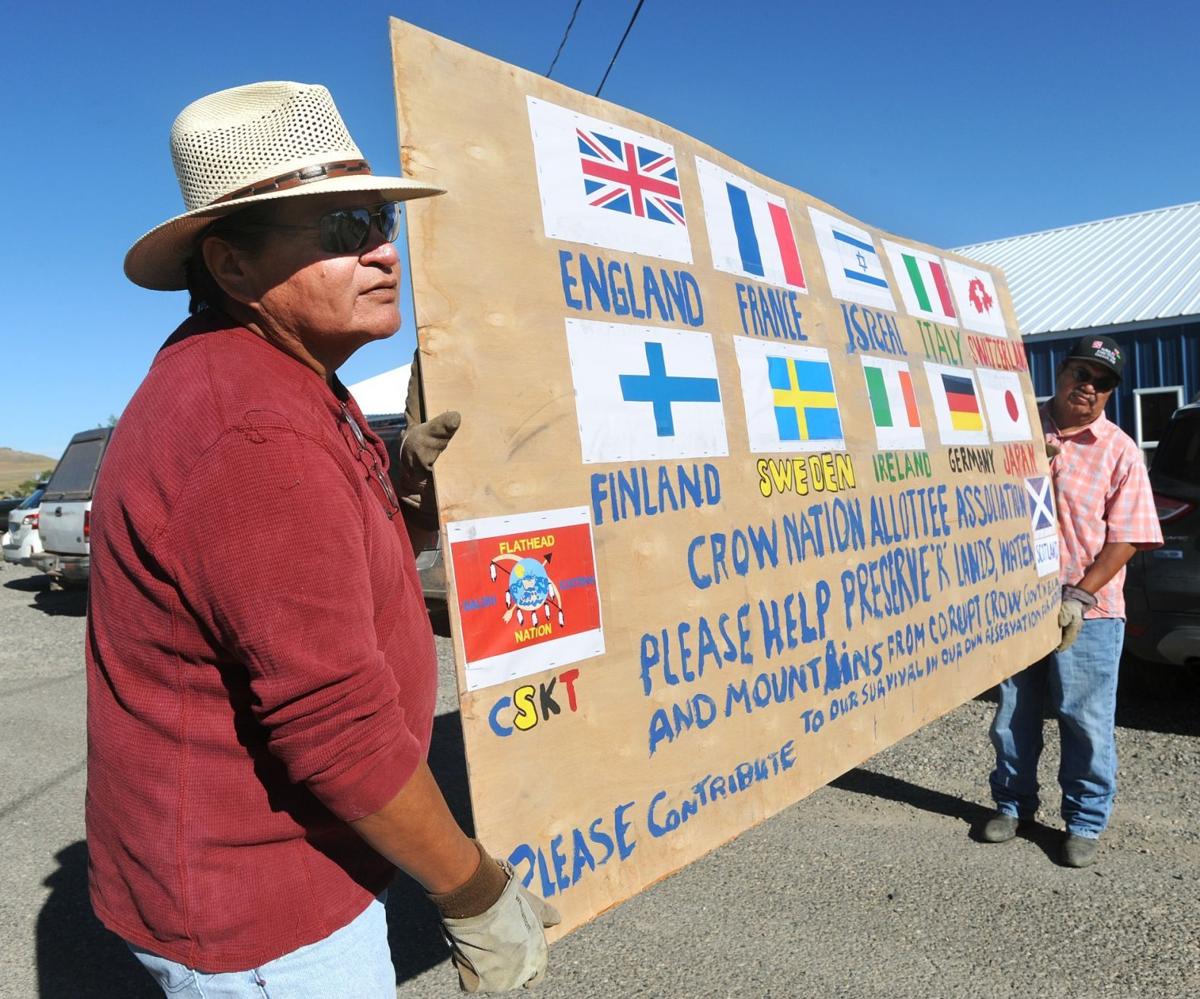 Crow Tribe member Elias Goes Ahead shows a sign he made for an online funding campaign to raise money for legal fees in a dispute over access across their lands on Wednesday. 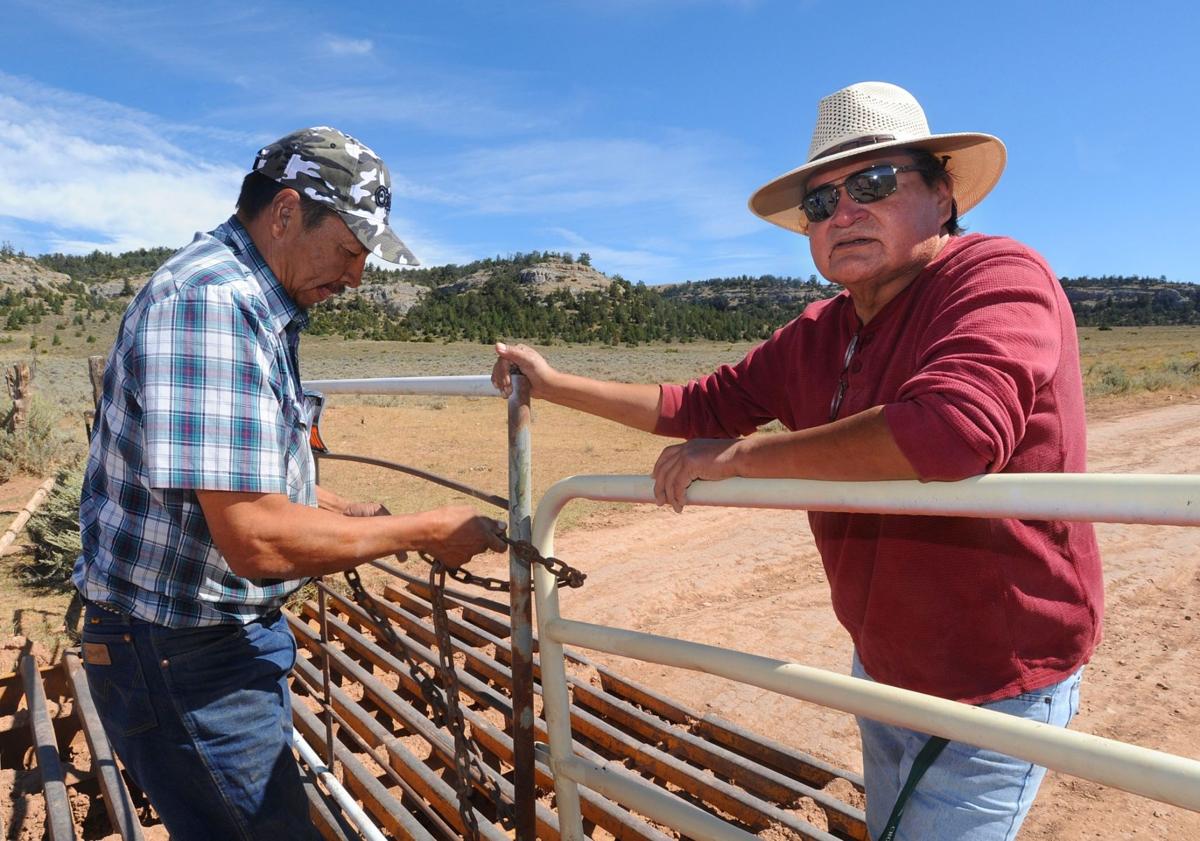 Crow Tribe members Buddy Brown and Elias Goes Ahead barricade the Sage Creek Road access to the Pryor Mountains in a dispute over access across their lands in 2015.

PRYOR — It’s not like it’ll snarl traffic for miles, but as of Wednesday, a portion of Sage Creek Road 14 miles southwest of Pryor has been closed by a handful of area landowners.

Crow Historian Elias Goes Ahead and Terry Plain Bull, whose family owns property along the rutted, rocky road that provides access to the Pryor Mountains, were with a small contingent of tribal members erecting barricades at three locations Wednesday afternoon.

The two said they have a number of concerns with tribal and federal authorities, including the lack of timely law enforcement response in the Pryor area, oil and gas lines that crossed allottees’ property without compensation, the diversion of Sage Creek without compensation or permission to cross allottees’ land and the continued degradation of the road.

Allottees are people who own undivided interest in reservation land given to them by the federal government. Goes Ahead said he and others secured the permission of members of the Crow Nation Allottee Association, which has about 5,000 members, before shutting down the section of road.

Messages with the BIA and Crow Tribal authorities seeking comment on the road closure were not returned Wednesday.

Goes Ahead joined Buddy Brown on Wednesday to begin erecting the barricades, a project Goes Ahead said was scheduled for completion that evening. In 2002, Plain Bull’s family closed the Pryor Gap Road to all but tribal members.

“It’s not about the money,” Goes Ahead said. “We just want allottees to share fairly and honestly, to get paid what they’re owed and to be able to use their property rights.”

“We are defiant, but it’s a peaceful protest,” he added. “We’re not going to throw rocks. We’re like Gandhi.”

Closing the road does not shut off access to the Pryor Mountains. Five years ago, the U.S. Forest Service rebuilt the Crooked Creek Road between the west and east ends of the mountain range.

On a tour of the area, Goes Ahead stopped periodically to discuss some of the natural features, including Sage Creek itself. In the Crow language, Sage Creek is Yellow Willow Creek, he said.

Ask what serves as a motivator, Goes Ahead has a ready answer.

“Your tenacity keeps you going,” he said. “When I get to the Pearly Gates, I want to hear, ‘You’ve put up a good fight. Go into heaven.’”

Goes Ahead said he spent two days and two nights creating a homemade sign demonstrating his level of frustration. Calling on countries he said he noticed sent a lot of tourists during his years as a guide at Yellowstone National Park and other places, including Israel, Finland and Japan, Goes Ahead’s sign asks for help preserving lands, waters and mountains from what he sees as corruption in tribal government and a lack of response from the Bureau of Indian Affairs.

“Since we get no help from the U.S. government,” he said, “we’re looking to the world.”

While it might have been therapeutic to create the sign, Goes Ahead isn’t about to attach it to the barricades, where it could fall victim to the elements and to other threats.

“We aren’t going to post the sign,” said Goes Ahead. “They’d just shoot it up and use it for target practice.”

“It can take law enforcement six hours to get here,” Plain Bull said. “We are far from Crow Agency.”

Thus, “most of us,” Goes Ahead said, “are independent people.”

Members of the Crow Tribe plan to close Sage Creek Road across their property beginning Sept. 8, citing years of use and abuse of the route wi…

Crow Tribe members Buddy Brown and Elias Goes Ahead barricade the Sage Creek Road access to the Pryor Mountains in a dispute over access across their lands on Wednesday.

Crow Tribe member Elias Goes Ahead shows a sign he made for an online funding campaign to raise money for legal fees in a dispute over access across their lands on Wednesday.

Crow Tribe members Buddy Brown and Elias Goes Ahead barricade the Sage Creek Road access to the Pryor Mountains in a dispute over access across their lands in 2015.