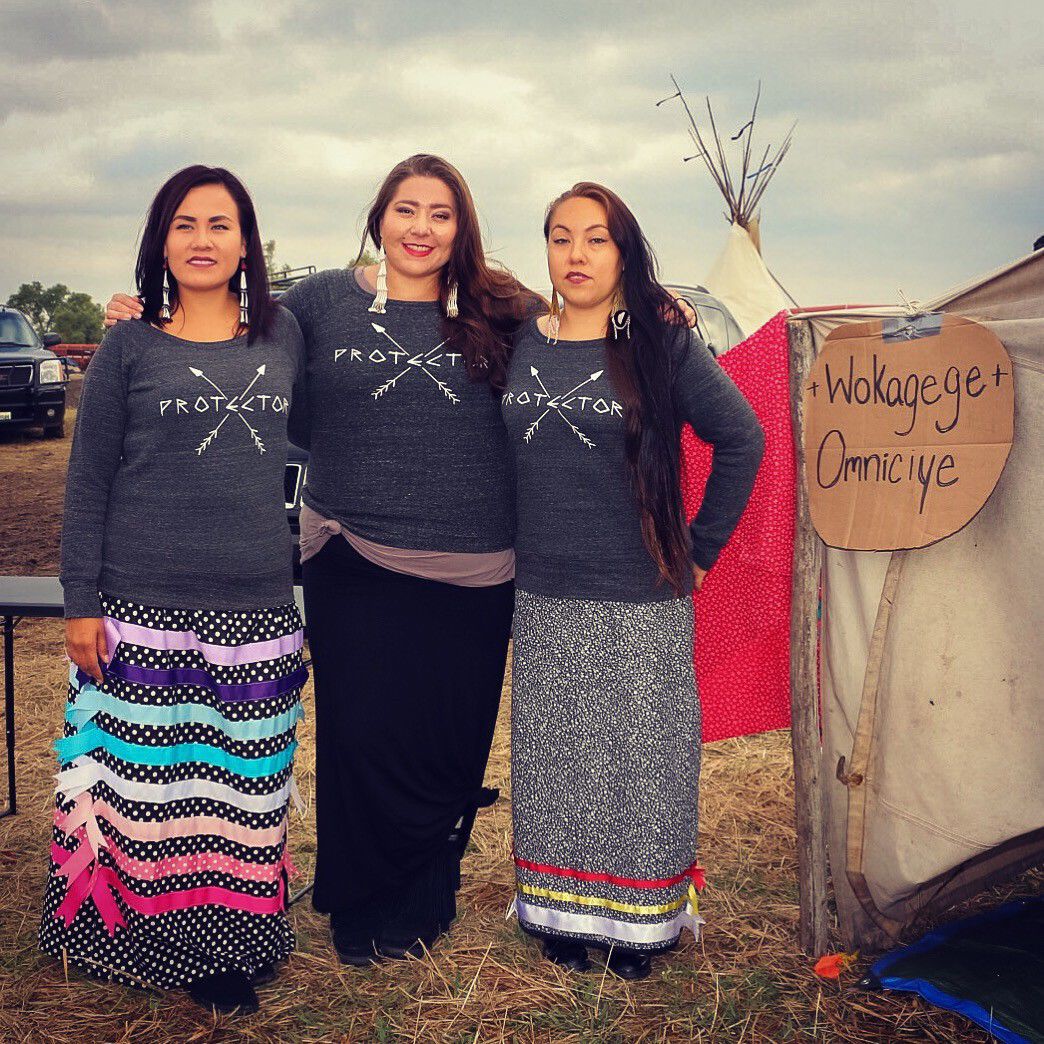 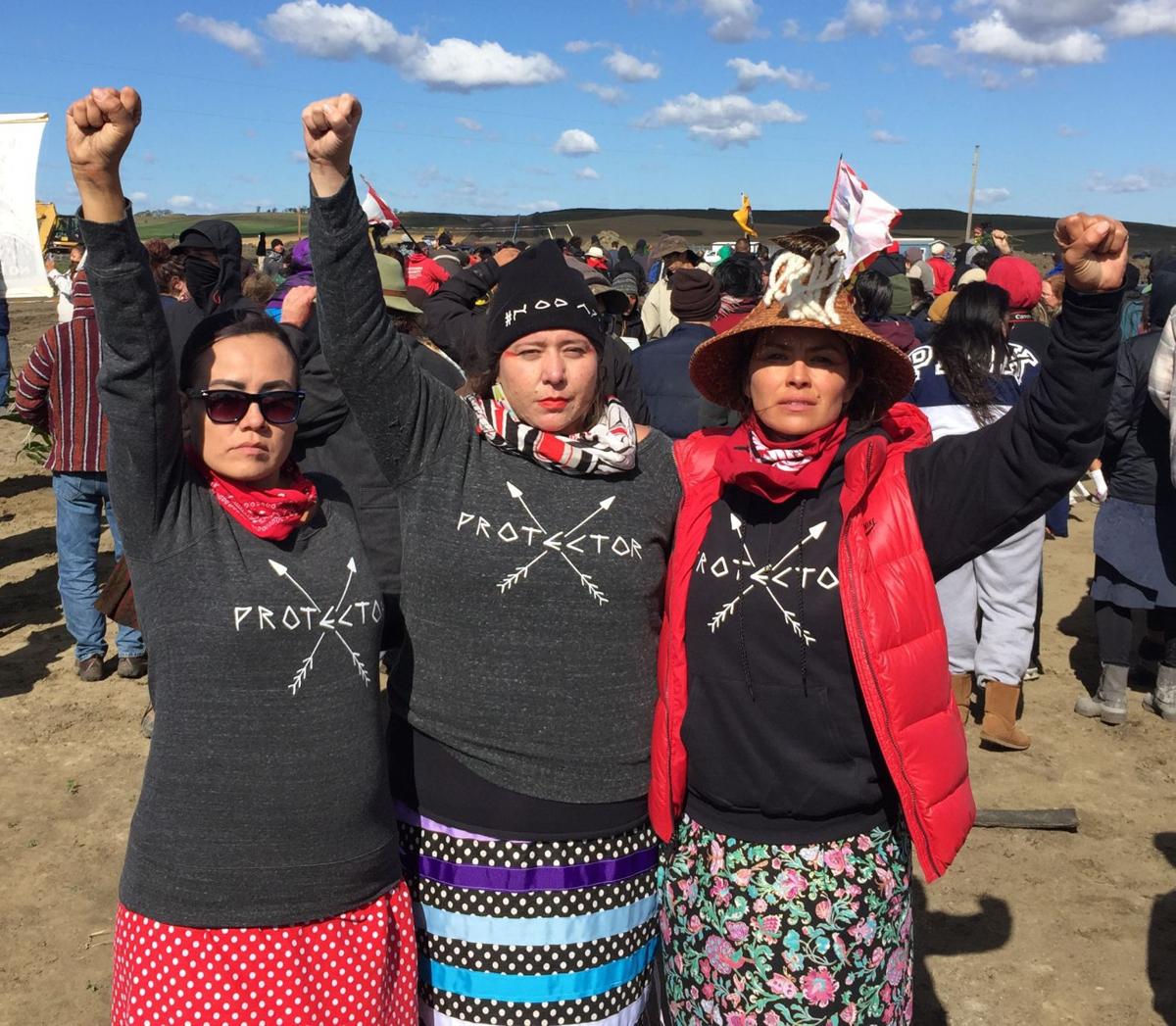 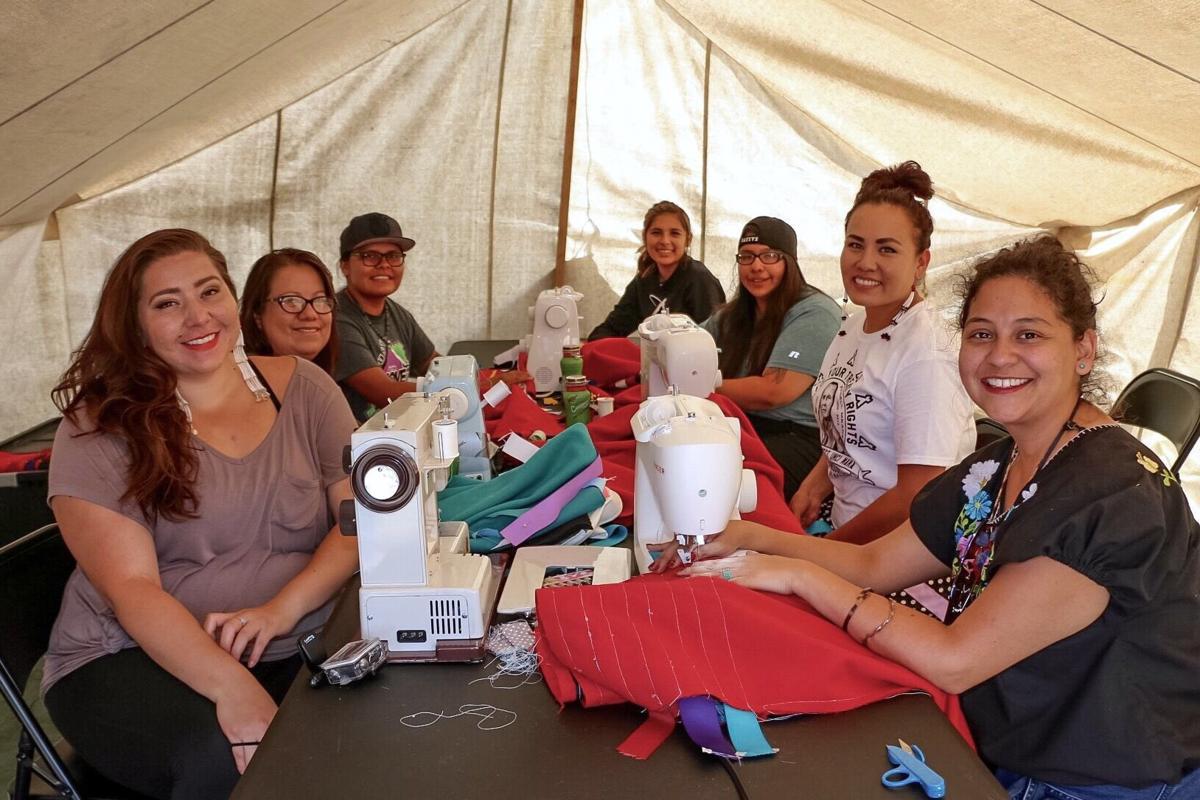 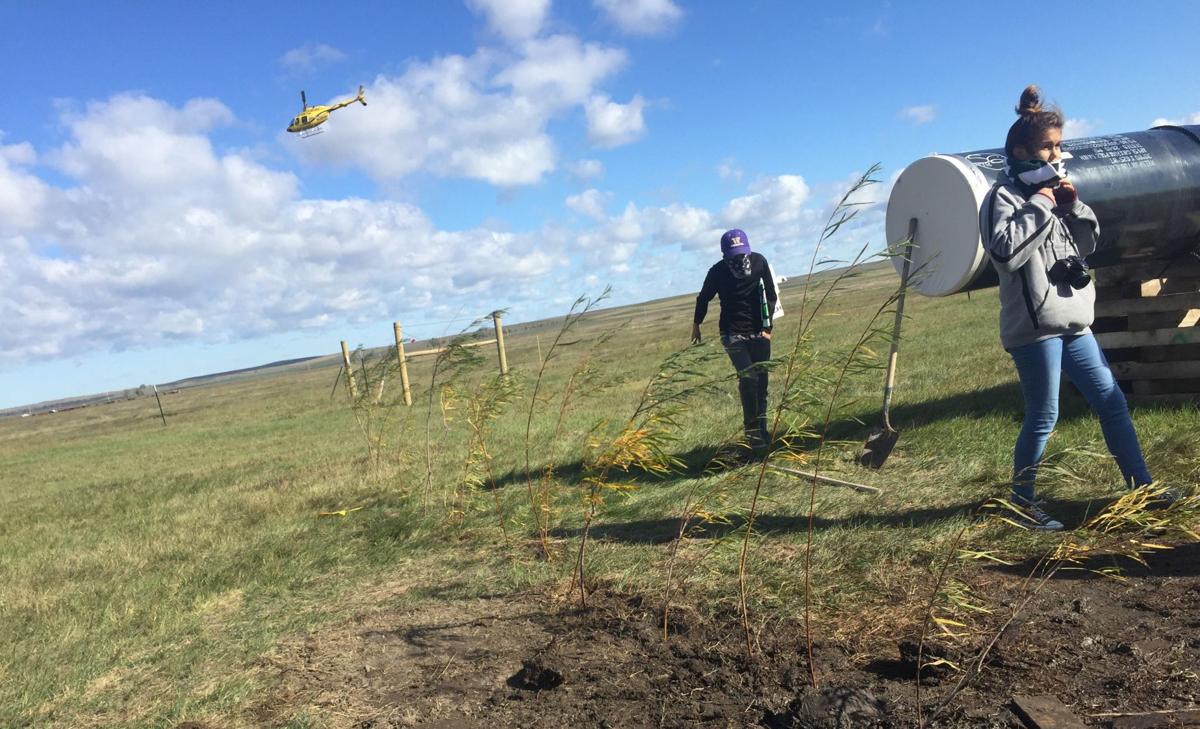 Bethany Yellowtail and others planted willow tree seeds in the path of the pipeline. "The intent is these willows will be there when we had children, when our grandchildren come about," Yellowtail said. 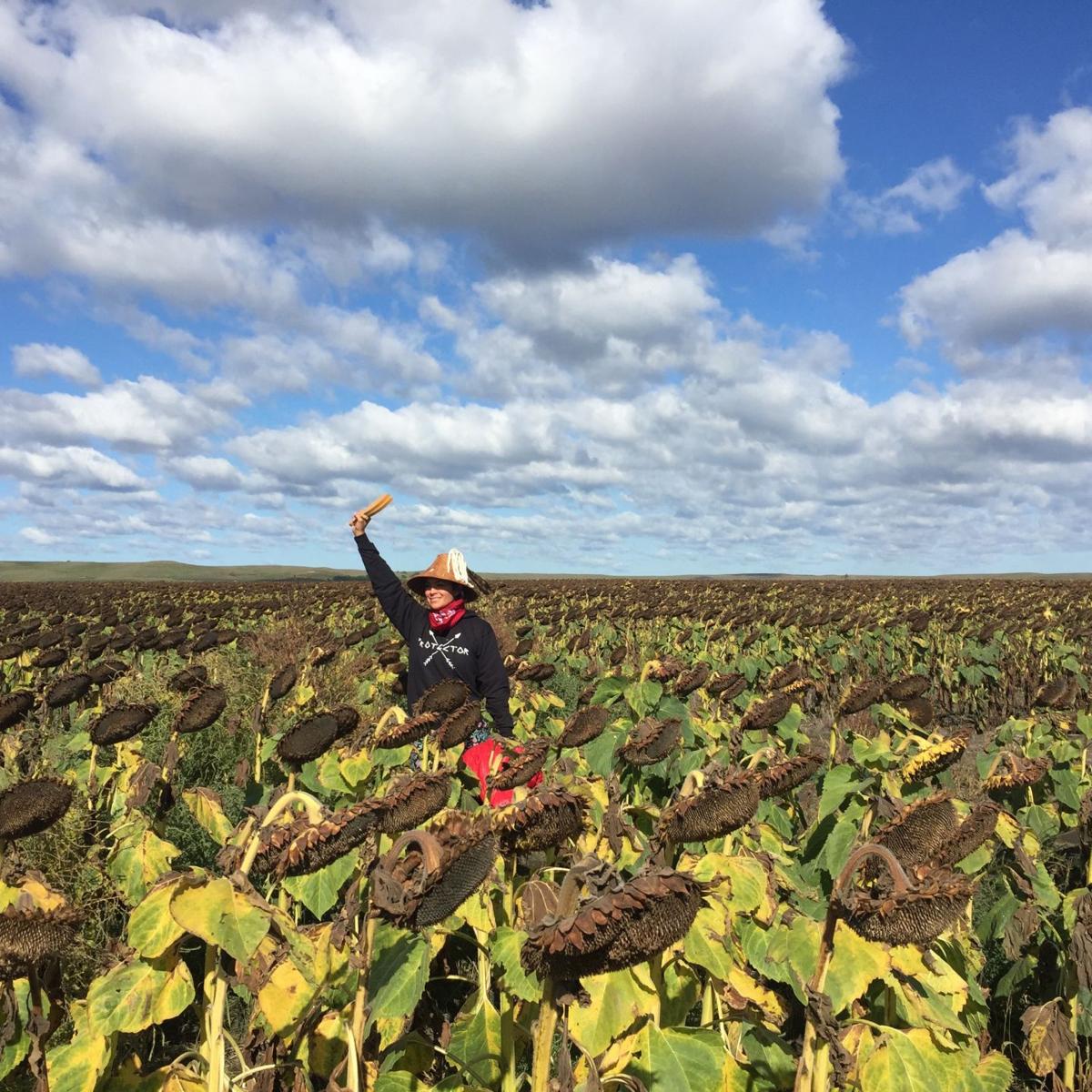 Temryss Lane stands in a field of sunflowers at Standing Rock. Lane is wearing a shirt designed by Bethany Yellowtail in support of the protest. 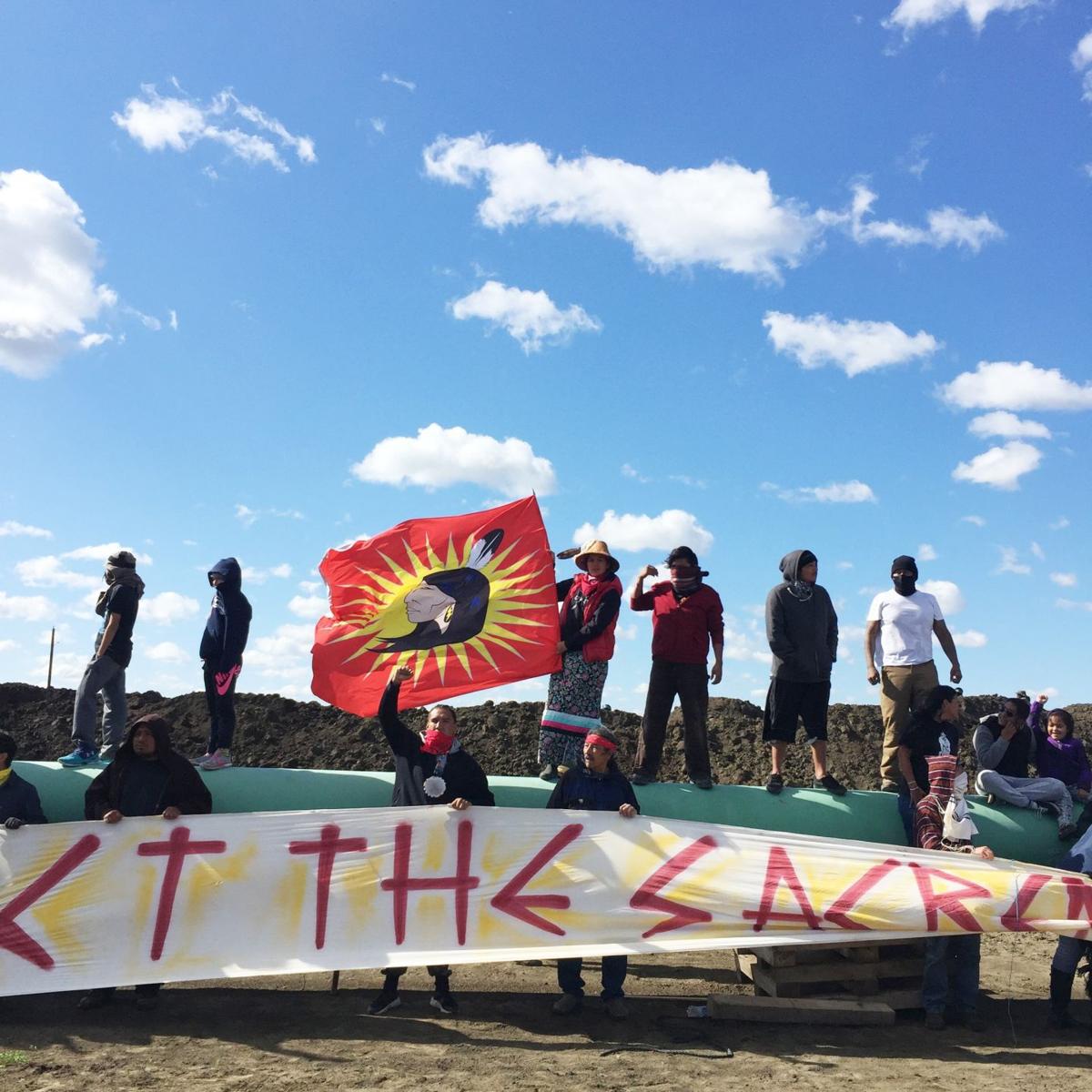 People protest on the front line at Standing Rock.

Yet when the L.A.-based clothing designer saw the widespread involvement of tribes protesting the North Dakota Access Pipeline, she knew she wanted to help in whatever way she could.

Yellowtail, an enrolled member of the Northern Cheyenne Tribe, grew up with her family on the Crow Reservation.

So for two weeks in September, Yellowtail set aside her B.YELLOWTAIL brand ambitions of producing "wearable art" and went to work creating what she has now dubbed Protector Gear, the sales proceeds of which will go toward the Standing Rock Sioux's legal fund, she said.

"It just kind of fell together really last minute," the designer said. "I really felt like I was drawn to support in any way I know how and, you know, I'm fortunate enough that I have a platform that I can do that immediately."

One of the first things Yellowtail said she settled on was the typeface that appears on shirts spelling out words like "Protector" and "Warrior."

She was familiar with a script an artist and activist friend Jaque Fragua had designed, so she reached out to him and obtained permission for its use.

"Anyone can use something that says the word 'Protectors' in any font you want," Yellowtail said. "I was drawn to Jaque's font because it had this kind of street graffiti-type feel that was still very minimalist and that's definitely a design aesthetic that I carry."

Yellowtail said she decided to call the items "Protector Gear" because "on the front lines they're saying, 'We're not protesters, we're protectors.'"

What she said began as a few shirts ultimately expanded to include beanies, hats and even water bottles.

One added bonus of the line according to Yellowtail is that it has given "opportunities for people who may follow me and have not been able to purchase my items."

Because she isn't equipped to produce items in bulk, Yellowtail said she had to use a third party website for help printing and delivering, which has limited some of her profit margins.

Still, Yellowtail said sales of Protector Gear have so far come in the range of $6,000. The project has helped her supply people "a garment that is for something and not just yourself," and that's a good feeling, Yellowtail said.

Protector Gear will be for sale until Oct. 10 at www.byellowtail.com.

Recently, Yellowtail flew back to Montana with a friend, a couple hundred yards of wool fabric, thread, needles and other sewing supplies.

Her father, a Wyola rancher named Wailes Yellowtail, drove them up to Cannon Ball, N.D. The experience left a powerful impression upon Yellowtail.

While there, Yellowtail contributed to a sewing circle organized by a woman named Lee Ann Eastman.

The gathering for the circle included a conversation about traditional women's roles in tribal culture, before the group attempted to connect with some of those roles by producing traditional clothing for those seeking to halt the pipeline's construction.

A registered Northern Cheyenne member who grew up part-time on the Crow Reservation, Yellowtail said she knew it was not her place to speak about those roles in Lakota Sioux territory, so she listened.

Then the work began. A line formed and Yellowtail said she went down the line showing participants basic clothing construction skills, with the aim of teaching them the skills to make a traditional ribbon skirt that could be worn at what she said are demonstrations called "nonviolent direct actions."

After providing tips, measurements were taken and Yellowtail said she then spent much of the remainder of the day cutting fabric.

Many of the participants were youth, along with a few older women and a few men, including a father making a skirt for his daughter, "which is really beautiful," she said. "A few men, I helped them make ribbon vests so they would have a vest to go out on the frontline because it's important for Native people to have our traditional wear and regalia for specific events like this."

Later in her stay, she said she participated in a demonstration on a "beautiful, beautiful day."

"I can't even describe how powerful it was out there, to be with all those people, praying and asking for help from the Creator."

Yellowtail said an elderly Lakota Sioux woman handed her and her friend willow tree seeds that they planted in the path of the pipeline. "The intent is these willows will be there when we had children, when our grandchildren come about."

"I was so overwhelmed with emotion," Yellowtail said. "(It's) Something I'll never, ever forget."

The experience was so positive, she said she came back to L.A., "floating."

Yellowtail said she wouldn't call herself an activist, "So I would be the last person I thought would be on the front lines, but I did it," she said. "I just had faith that that was exactly where I was supposed to be in that moment."

The entire experience, from designing Protector Gear to visiting the camp, has also deepened her relationship with water and made her a more conscious consumer, she said. It has also given her increased confidence in her professional pursuits.

"It was good affirmation for me to go there," Yellowtail said. "I see how my work and my career path and the things I’m passionate about, how they’re still very much intertwined in the big picture."

Australia lost one-third of its koalas in three years

Canary Islands: Houses and crops are threatened by the lava flow

Canary Islands: Houses and crops are threatened by the lava flow

This farm in the U.K. is for animals with special needs

This farm in the U.K. is for animals with special needs

When Chase Comes At Night graduates from Skyview High next year, he won’t be able to wear a traditionally beaded graduation cap like his peers…

If you’ve ever doodled a cartoon on a piece of paper during school, or at an office meeting that drones on endlessly, Dave Hartman is an inspiration.

At the beginning of each month, Jordan Reed opens her Lone Reed Designs Etsy page to accept orders for her custom-made leotards. Reed makes on…

It takes about two minutes for a skilled shearer to separate a Rambouillet lamb from the fluffy coat that it has worn since the day it was born.

For the 99th year, thousands will gather this week in Crow Agency for the annual Crow Fair.

It’s not that Native filmmakers are just joining the rush to tell their stories; they’ve been doing that for centuries. But finally, the film …

To find Marita Growing Thunder at the 50th Annual MSUB Powwow, follow the blue and yellow paper footprints taped to the tile floor.

Bethany Yellowtail and others planted willow tree seeds in the path of the pipeline. "The intent is these willows will be there when we had children, when our grandchildren come about," Yellowtail said.

Temryss Lane stands in a field of sunflowers at Standing Rock. Lane is wearing a shirt designed by Bethany Yellowtail in support of the protest.

People protest on the front line at Standing Rock.