Big Sky Pet Resort at 2922 Millennium Circle is pictured in this 2015 file photo. 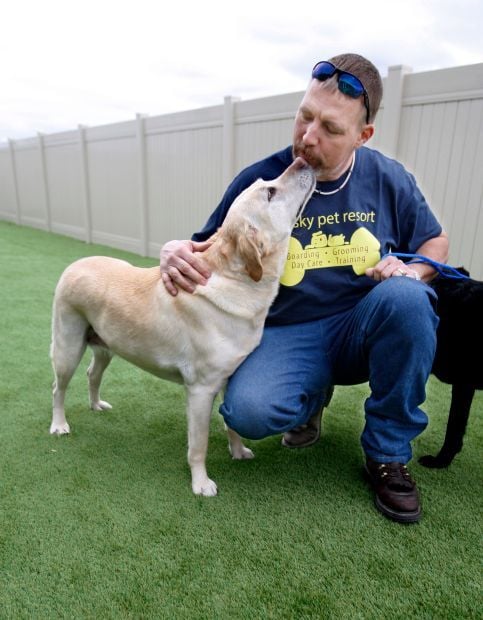 In this 2015 file photo taken for an advertisement, Marc Underwood plays with dogs at Big Sky Pet Resort.

A Billings pet care business employee captured on video hitting dogs, and in one case dragging one by its collar, has been fired and the Billings Police Department's Animal Control Division has opened an investigation.

Big Sky Pet Resort owner Marc Underwood said he is cooperating with investigators and has been contacting clients ensuring them he is committed to something like this never happening again. He also confirmed that the fired employee is a relative, but did not describe him as immediate family.

"Once we found out, he was terminated," Underwood said. "We have dogs ourselves. We've been in business for many years, and this isn't how we run a business."

The videos were published to Facebook on Wednesday by Billings resident Isabel Quintana, who said she had made the videos while working for Big Sky Pet Resort. She said she quit Tuesday after working there for three months.

Big Sky Pet Resort has two locations in Billings and its services include boarding, grooming, daycare and training. The business is not affiliated with Big Sky Pet Center, another Billings pet business offering veterinary care, boarding and daycare for pets.

Quintana, 19, said she took the videos on March 25, but that the employee in question had been treating dogs that way for months. Explaining why she took the videos and published them, Quintana said it was out of frustration that the employee had ignored her when she told him to stop and that nothing had been done by management. She also said she didn't intervene physically out of concern for her safety. She said she also contacted the police department.

The trio of videos, each around five seconds in length, capture what Quintana says are incidents that happened within minutes of each other.

In the first video a male person in dark colored clothing is seen on the other side of a concrete-floored room bent over amid a group of dogs. He sets down a white spray bottle and then cocks his arm at the elbow before swinging at the dog to hit it several times and then pushing it.

The next video, which is six seconds, appears to show the same person pulling a dog's collar from above its neck and then dragging the animal by the collar several feet towards a fenced area as several dogs follow behind.

The third video is five seconds and shows the same one second clip on loop of apparently the same person pulling his foot back and kicking a dog in the head.

Quintana's post with the videos had been shared more than 4,300 times by early Thursday evening. The post includes the message "PLEASE REPOST AND SHARE SO WE CAN GET JUSTICE FOR THESE DOGS AND PLEASE I BEG YOU DO NOT BRING YOUR PETS TO THIS HORRIBLE BUSINESS."

She also alleges in the Facebook post that other dogs have been treated in the way the videos show, with some being punched, kicked, dragged "and just straight up beaten." She additionally wrote that Big Sky Pet resort doesn't treat its employees well and specifically mentioned them getting upset if an employee has to miss work for a medical appointment.

Speaking by phone Thursday, she said that employees at Big Sky Pet Resort are supposed to leash a dog and move the animal to another area while keeping other dogs away and to also squirt the dog with squirt bottles provided there.

"The reason why I recorded it was to get evidence for the authorities, because this has been going on for a long time," she said.

She added that if management "weren't going to do anything about it, I was going to take matters into my own hands, because I don't put up with animal abuse at all."

Underwood denied accusations the videos captured any kind of regular mistreatment of animals at his business. He said his wife was made verbally aware of the incidents Saturday, they saw a video on Monday and then saw the full videos on Wednesday.

"I know there's a lot of talk out there, that this is commonplace, and it's just absolutely not true. We would never allow this to happen, ever. It's just not what we do," he said.

Underwood says he has been in the pet care business for around 20 years, and also raised and trained Labrador Retrievers for years. Big Sky Pet Resort is a business venture with his wife Bobbie Underwood. They have a location off Millennium Circle on the West End and expanded into a second location on Grand Avenue in 2014.

"It's gonna take awhile to rebuild the trust. Our clients that know us and trust us, some of them are OK with it, some of them will never be OK with it, and I don't blame them," Marc Underwood said. "Our goal right now is to make sure it never happens again and hopefully over time people will be able to see their way back to us. And it's going to be a process, it's not going to be something that happens overnight."

Protests in Minnesota as former officer is charged

A School District 2 employee was recently placed on administrative leave and Superintendent Greg Upham says he has ordered an investigation.

Plain Bull had been facing up to life in prison after he admitted to killing Lenita Goes Ahead in October 2020.

The executive director of the St. Vincent Healthcare Foundation will step down from his position at the end of the month.

Cape Air getting new fleet of commuter planes for Montana

Cape Air, which services seven flights from Billings to rural Eastern Montana, is adding a new model of commuter airplane to replace the airline's aging fleet of Cessnas.

Steve Loveless, who during the last decade has shepherded St. Vincent Healthcare in Billings through unprecedented growth — and a devastating …

Voice from the past: Northern Cheyenne combat vet reconnects with long-ago platoon buddy

Photo: Crash on Highway 3 sends drivers to the hospital

Billings police fire and ambulance personnel were on the scene of a crash on Highway 3 west of the airport Wednesday morning. The drivers of b…

Council and city staff crafted the ordinance as a way to penalize spas that operate without a state massage therapy license or use it as a front to offer illicit sex acts.

Billings Public Schools officials are planning on increasing the number of guests at graduation ceremonies this year to six guests per graduate.

Big Sky Pet Resort at 2922 Millennium Circle is pictured in this 2015 file photo.

In this 2015 file photo taken for an advertisement, Marc Underwood plays with dogs at Big Sky Pet Resort.