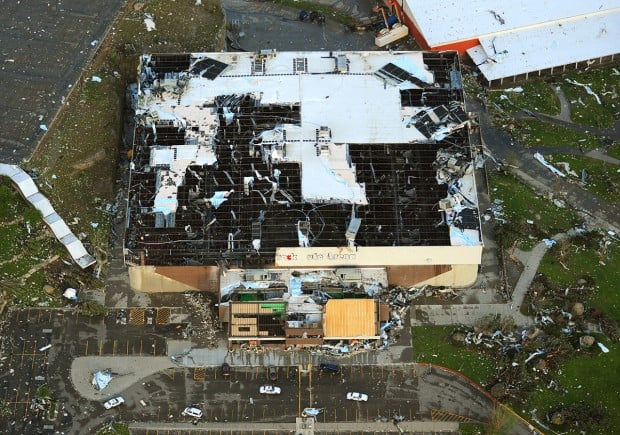 An aerial view shows the Rimrock Auto Arena at MetraPark that was heavily damaged by a tornado Sunday afternoon. June 20, 2010. 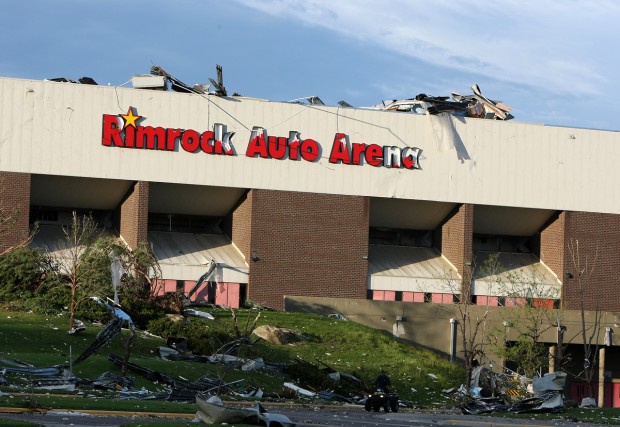 The sun sets on the Rimrock Auto Arena on Sunday, June 20, 2010 after a tornado destroyed the facility. 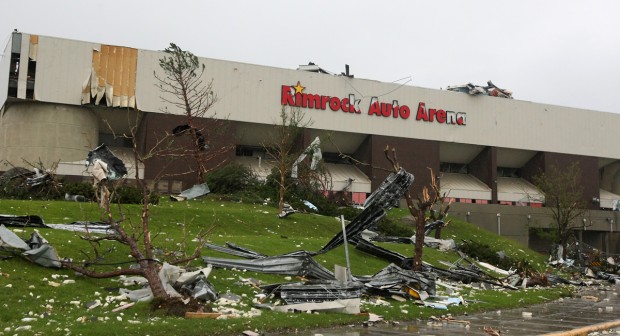 Debris lays scattered around the Rimrock Auto Arena at MetraPark after a tornado destroyed the 12,000-seat facility on Sunday, June 20, 2010. 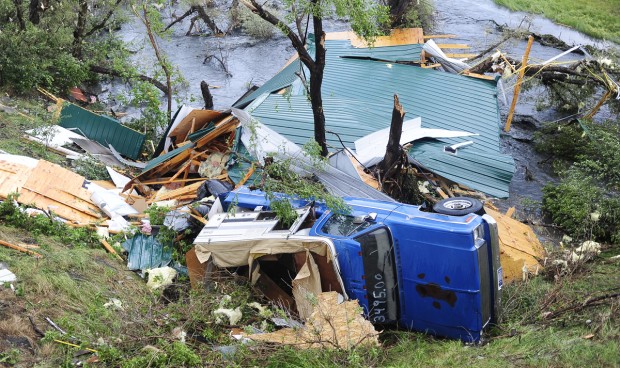 A pickup and building materials clogs Alkali Creek Sunday near Metra Park where a tornado touched down. 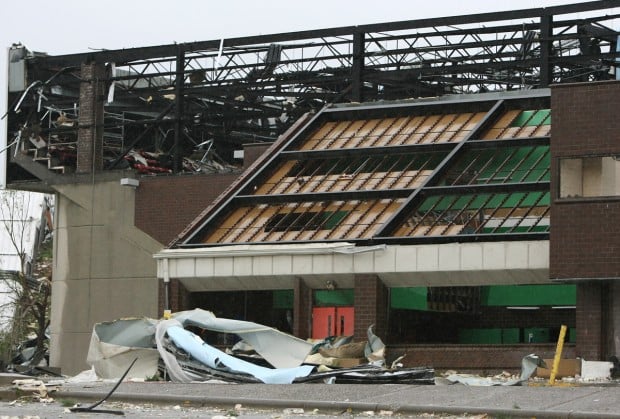 Debris lays scattered around the Rimrock Auto Arena at MetraPark after a tornado destroyed the 12, 000-seat facility on Sunday, June 20, 2010.

A tornado touching down in MetraPark on Sunday afternoon destroyed Rimrock Auto Arena and heavily damaged several Main Street businesses as it hopped across the Heights.

Commissioner Bill Kennedy said the county will declare an emergency around 9 a.m. Monday and send that declaration to Gov. Brian Schweitzer. Once the declaration is official, the county should have easier access to funding, Kennedy said. Schweitzer is expected to be in Billings before noon to view the damage.

“A total disaster,” said Yellowstone County Commissioner John Ostlund after he toured the arena Sunday. “Absolutely nothing is left of it.”

Not only did the tornado rip off the roof, but rain pouring into the cavernous building damaged the interior.

“It isn’t just the cover (the roof), it’s the whole structure,” including computers and the rooftop heating and air-conditioning system, Ostlund said.

“You can see the field from last night’s football game,” Kennedy said. “The field was just kind of sucked up and rolled into a ball.”

Luckily, no one was in the building at the time, he said.

Expo Center, the closest large structure to the arena, also sustained damage to its roof, but the Montana Pavilion appeared to escape harm.

MetraPark General Manager Bill Dutcher said that several projects recently had been completed at the arena: a new Cowboy Hall of Fame, lights on the concourse, gutters and a half-house curtain that hung from the ceiling.

In June 2006, voters approved a one-year levy to repair or replace the aging roof on the arena. A year later, the county paid $841,000 to replace the 97,263-square-foot roof. The new roof featured thick foam to improve insulation. Chunks of that foam were scattered in every direction after the tornado hit.

The twister also snapped or stripped bare trees in front of the sports arena, the largest building at MetraPark. Pieces of the roof or guard railing were wrapped about what was left of the trees.

The three county commissioners, Dutcher and country finance director Scott Turner planned to meet at 7 a.m. Monday to begin assessing the damage and figuring out how it will affect coming events scheduled for the complex.

If the tornado had hit the building a day earlier, 3,800 football fans would have been in the arena for a Billings Outlaw game.

Late Sunday evening, the Montana National Guard had been asked to bring in 10 to 20 guardsmen to help the Billings Police Department protect property in the damaged area, said Sgt. Kevin Iffland.

Billings resident David Meduna was dropping off cardboard at Pacific Steel at the east end of Fourth Avenue North when a golf-ball sized hail began hammering his truck.

Then he saw a tornado form over MetraPark, “tearing up the ground.”

Although a building obscured his view of individual buildings at the fairgrounds, he saw chunks of boards and siding flying in the air.

The funnel cloud appeared to be about 12 feet across at the top and narrowed into a small cone.

The tornado bounced down at several places in the Heights, damaging buildings and scattering debris from Airport Road intersection to Probuild at 542 Main St.

Fast-Break Windshield at 605 East Main St. was the most heavily damaged, with just a couple of walls still standing. The roof of that business and a pickup truck with a camper top landed in the Alkali Creek ravine.

Most of the roof at Reiter’s Marina and Reiter’s Kawasaki at 450 Main St. was ripped off and windows broken out.

Jack Reiter was at home worrying about golf-ball size hail when he got a call from a nephew who was working at the shop warning that that a twister was headed toward the business. The nephew took off.

When Reiter, owner of Reiter’s Kawasaki, arrived at his shop at the intersection of Lake Elmo Drive and Main Street, he found a mangled mess of new motorcycles and bricks in his flattened display shop. Suction from the tornado bulged the garage doors outward. Windows were shattered and light fixtures dangled from the ceiling. As he moved slowly through the building assessing the damage, he found his cat, T-cat, had ridden out the tornado and was hiding at the back of the building.

The 18,000-square-foot Reiter’s complex also includes a marina and ski and active-wear shop in a complex of three buildings. The other two buildings were not as badly damaged as the motorcycle business. The active-wear shop, managed by Jack’s sister, Bonnie Yanok, had some window damage and water was coming through the roof like a sieve.

A large construction trailer on the property was thrown about 80 yards from the business, toward the nearby laundromat. On Friday, a customer picked up a motorcycle and left her Volvo in Reiter’s parking lot. There was not a single window left in it.

Main Street Casino at 406 Main St. appeared to be intact, but was surrounded by debris.

A panel truck from a Main Street business was picked up, moved about 100 feet and tipped over.

Rain inundated Alkali Creek until it was at least 100 feet wide with brown, rolling waves.

The tornado tore off the tops of Russian olive trees along Alkali Creek.

There also were reports of gas-main leaks, windows knocked out of businesses and cars floating in flooded areas.

James Maney barely escaped the path of a tornado, but his front porch wasn’t so lucky.

Maney said he watched the tornado touch down near the Yellowstone River across the street from his house at the intersection of Lincoln Lane and Bench Boulevard before it jumped the street and tore the front porch off his home.

“That’s all my debris,” he said while pointing out a wide swath of broken wood along Lincoln Lane. “That’s my front porch. The porch was gone faster than you can snap your fingers.”

He was able to holler inside to his wife and three children to run to safety in the basement. Maney made it about halfway into his living room before the tornado ripped the front porch from his home.

He then watched the twister move west across Main Street — where it destroyed several businesses — and then head over toward Rimrock Auto Arena at MetraPark.

“A funnel cloud came down and tore the roof off and hung around for probably three to four minutes,” he said. “It just picked up the roof of the Metra like it was paper.”

Maney said that when the tornado touched down in his front yard, the winds were so strong that they bent several large trees nearby to the ground.

“I was scared to death,” he said. “All I could think of was to get my kids to the basement and hope the house made it through OK.”

Stacey Barbeau was shopping at Target in the Heights unaware of the tornado. When she noticed other shoppers looking out the windows at wind-propelled debris flying by, Barbeau told her mother that that’s what a tornado probably would look like.

Target employees didn’t allow shoppers to leave because of the danger, although one shopper who dashed into the parking lot to check on her children in her car nearly was nearly hit by a flying piece of sheet metal.

At point, about 4,000 residents in the Heights were without power because of downed power poles and snapped lines, said NorthWestern Energy spokesman Rick Burt.

Later in the evening, only 1,100 residents along Lake Elmo Drive, Main and Bench still were without power. Crews would work all night to repair 12 damaged poles to restore service to those houses, Burt said.

Anyone seeing a downed power line should stay away and call 911.

Main Street was closed indefinitely from First Avenue North to Hilltop Road.  All vehicles and people on foot should stay away from that area, Iffland said.

Traffic was snared so badly some people detoured from the Heights all the way to Huntley to reach downtown Billings.

As unusual as it was for a tornado to hit Billings, even more extraordinary was the appearance of several Sunday afternoon.

About 4:30 p.m., a motorist driving from Ballantine to Billings along Interstate 94 spotted three funnel clouds — one near Huntley, one at Metra Park and one near Lockwood.

Just before 5:30 p.m. another funnel cloud was sighted near Shepherd.

Some minor injuries were reported.

No patients were admitted to Billings Clinic because of the storm, Luke Kobold, public relations officer said.

On June 20, 2010, a tornado touched down along Main Street in Billings, heavily damaging several businesses and tearing the roof off of Rimroc…

Outlaws out on sour note

The Billings Outlaws football team disbanded on Thursday and won’t play another game in Billings, according to the team’s majority owner.

An aerial view shows the Rimrock Auto Arena at MetraPark that was heavily damaged by a tornado Sunday afternoon. June 20, 2010.

The sun sets on the Rimrock Auto Arena on Sunday, June 20, 2010 after a tornado destroyed the facility.

Debris lays scattered around the Rimrock Auto Arena at MetraPark after a tornado destroyed the 12,000-seat facility on Sunday, June 20, 2010.

A pickup and building materials clogs Alkali Creek Sunday near Metra Park where a tornado touched down.

Debris lays scattered around the Rimrock Auto Arena at MetraPark after a tornado destroyed the 12, 000-seat facility on Sunday, June 20, 2010.
© Copyright 2020 Billings Gazette, 401 N Broadway Billings, MT | Terms of Use | Privacy Policy
Powered by BLOX Content Management System from TownNews.com.
You don't have any notifications.