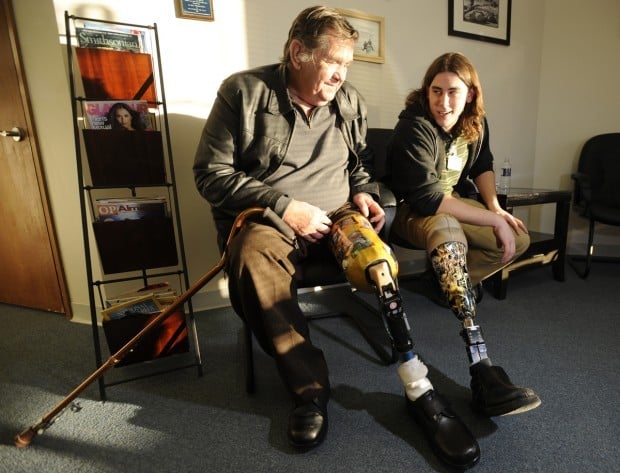 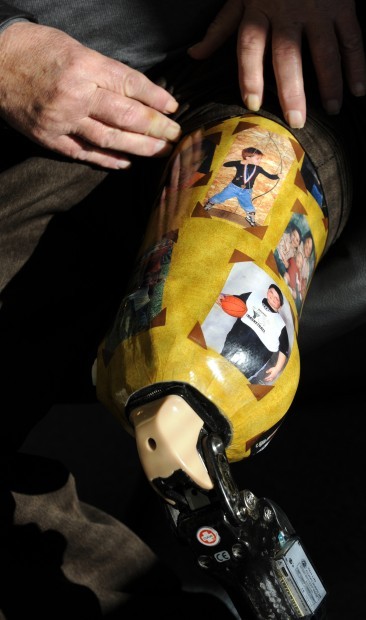 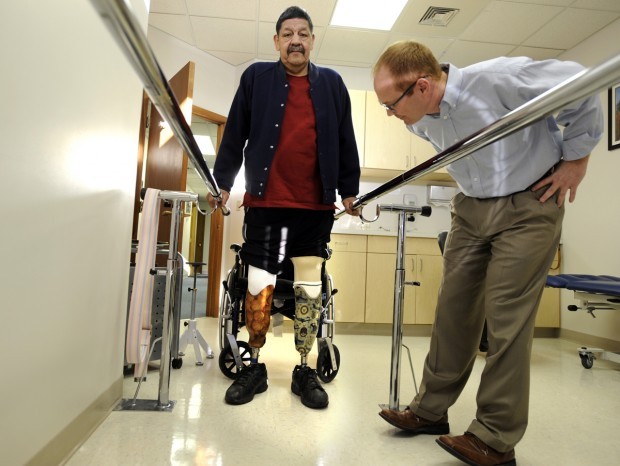 Jim Middleton watches as Bill Three Irons, a recent amputee, begins learning to walk on his custom prosthetics. Three Irons’ prosthetic legs are adorned with a basketball and a naval theme.
MATT HAGENGRUBER Of The Gazette Staff

Zach Rooney may be the only guy in America with prosthetic legs dedicated to the heavy-metal bands Megadeth and Iron Maiden.

And he’s almost certainly the only guy to have autographs from Megadeth band members permanently inked on his leg, which is made of carbon fiber and metal.

Amazingly, Rooney had no idea what his Iron Maiden leg would look like until prosthetist Jim Middleton presented it to him at his clinic on North 27th Street.

“I thought it was pretty bad-ass,” the 26-year-old Rooney said. “He was telling me all along that he could do it and how awesome it was. I came out way more impressed than I expected.”

Middleton is the owner of Rimrock Prosthetics, which opened in 2006. He worked and studied around the country before moving to Billings, and Middleton brought with him top-notch credentials and a flair for surprising his patients with elaborately designed arms and legs.

Middleton had five patients in his office Monday afternoon, and all were eager to show off their prosthetic legs. That’s not always the case with regular “pink” limbs that are designed to look natural, Middleton said.

“The people that want the leg to look kind of like their old leg, they don’t get their head around the fact that they’re an amputee,” Middleton said. “I’ll do something to prove that I’ve been listening to them. One guy used to drive a Mack truck, so I bought a Mack truck T-shirt and laminated that over the socket so that it’s laminated in there. I just presented it to him and said, ‘Here’s your leg,’ and he was beside himself.”

A rundown of his designs shows that Middleton has a creative touch: a leg for a die-hard Denver Broncos fan; an arm dedicated to Johnny Cash; a leg with a wild-looking bluebird on it; and a leg plastered with photos of Danny Gates’ grandkids, one of whom helped design his grandfather’s leg.

“It was very upsetting to me when I lost my leg, but it was more upsetting to my 10-year-old grandson at the time,” Gates said. “Jim actually brought him right in here to the shop and let him help build the leg so he could feel he was doing something to help me regain my mobility.”

Middleton spends so much time with his patients while fitting them for their limb that he gets to know all kinds of details: their hobbies, their passions and their families. Sometime during that process, Middleton comes up with an idea for a design, and he then figures out how to get it onto the limb. Usually, fabric is laminated on a leg.

But Middleton never forgets the limbs he creates. When Megadeth came to town recently for a concert, Middleton called a local radio station and got backstage passes for Rooney, who parlayed that into an autograph session.

Middleton’s patients said that they aren’t self-conscious about their legs and don’t mind wearing shorts to show them off. One patient, Jim Shesne, is a bird-watcher and sports a “distressed mountain bluebird” on his leg. The design attracts attention, especially from kids. But Shesne said Middleton’s talent isn’t just in how the legs look.

“He not only can design well, but functionally they’re superior as well,” Shesne said. “I think he’s the best one in town.”

A 20-year-old Billings man was killed in a single-car crash Friday night on Interstate 90 in Big Horn County.

“I was not expecting that this would be the thing that would nearly kill me,” Nathaniel Kaiser said.

The restaurant is projected to reopen on Sept. 25. “So far I love it more than ever,” said manager Christian Reinker.

The Billings Fire Department rescued a man who fell from the Rimrocks west of the Billings airport at 4 a.m. Sunday.

MetraPark will open the doors 90 minutes early, at 5:30 p.m., and will have 18 entrances – 14 on the main level and four on the lower level – to accommodate the crowds.

Jim Middleton watches as Bill Three Irons, a recent amputee, begins learning to walk on his custom prosthetics. Three Irons’ prosthetic legs are adorned with a basketball and a naval theme.
© Copyright 2021 Billings Gazette, 401 N Broadway Billings, MT | Terms of Use | Privacy Policy
Powered by BLOX Content Management System from TownNews.com.
You don't have any notifications.