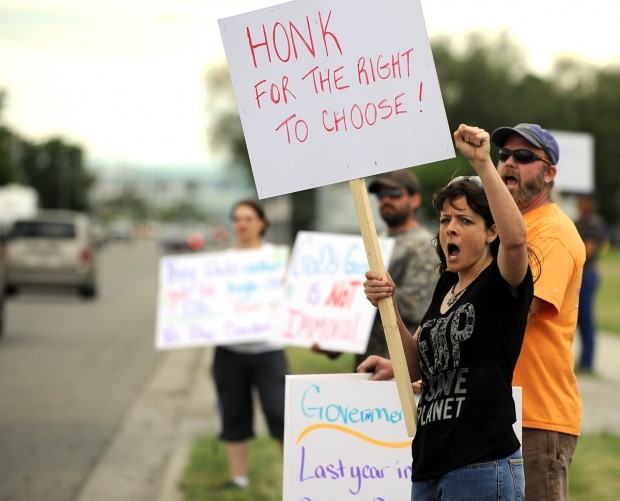 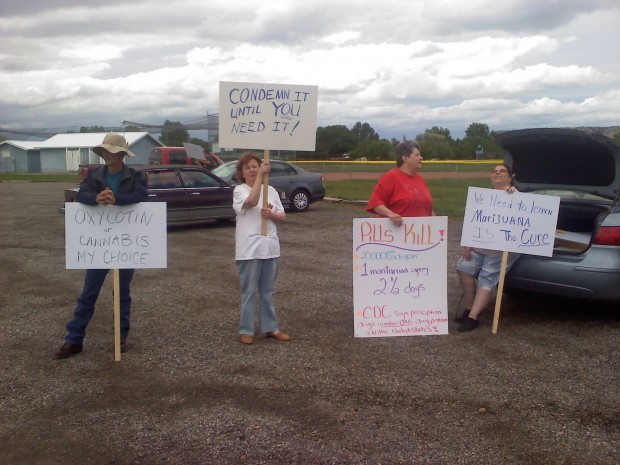 Medical marijuana supporters picket across from petitioners gathering signatures to repeal Montana's medical marijuana law at Centennial Park on Billings' West End this afternoon. Check back for more photos and a complete story. 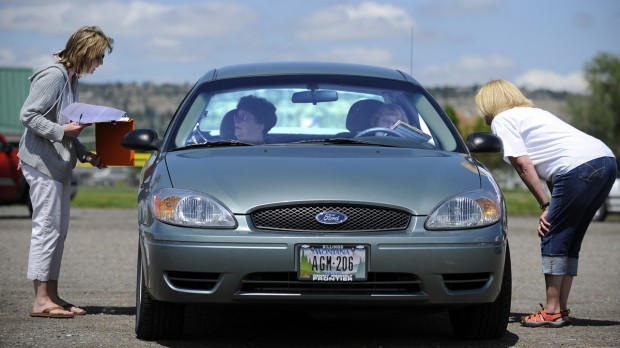 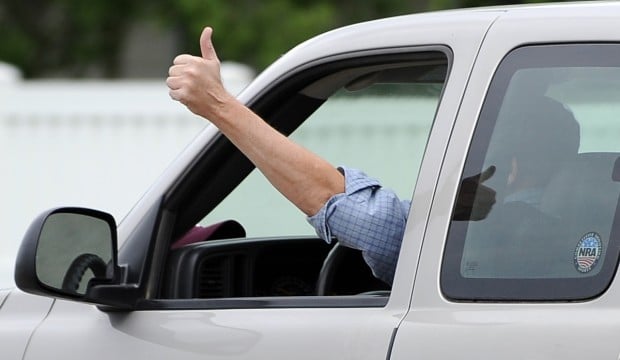 A medical marijuana supporter gives a thumb up to protesters at Centennial Park as opponents collect signatures for a petition to repeal the Montana medical marijuana laws Wednesday afternoon.
ED KEMMICK Of The Gazette Staff

Supporters and opponents of medical marijuana faced off across a parking lot Wednesday, where backers of a citizen initiative to repeal Montana’s marijuana act were collecting petition signatures.

The signature gatherers set up a table in the parking lot of Centennial Park, just south of Broadwater Avenue on 32nd Street West, where volunteers with clipboards dealt with a steady stream of motorists who pulled over to sign the petitions.

Across the parking lot were protesters who carried signs that said, “God’s garden is not immoral,” “Condemn it until you need it” and “Regulate, not repeal,” among other sentiments.

“We’re not against regulation. We understand that there are things that need to be dealt with,” said Laura Murphy, one of the organizers of the protest.

The petition gatherers were seeking to qualify Citizens Initiative 165 for the ballot in November. It would repeal the medical marijuana act approved by Montana voters in 2004. The petition drive was only recently launched and needs 24,337 valid signatures by Friday.

One of the protesters at the park Wednesday was Judy Armistead, a 69-year-old Billings woman who badly injured her knee in a fall from a ladder and had been using potent painkillers, including hydrocodone — which she called “synthetic heroin” — for 10 years.

She used to take three to six pills a day, she said, but since she began using medical marijuana three months ago, she is down to maybe half a pain pill a day.

“I sure don’t want to take pain pills the rest of my life,” she said. “If I can light up a pipe and take a couple of hits, it’s better than that other stuff.”

Murphy, who lives in Bozeman, became the first person in Montana to receive a state license for an industrial hemp-growing operation last fall. Hemp is a fibrous plant similar to marijuana but lacking the mind-altering component.

Murphy and her fiancé also run The Healing Center of Montana, a nonprofit collective that works on behalf of medical marijuana patients, caregivers and doctors.

She is a medical marijuana user who said she suffers from four herniated discs and other ailments. At the protest, she was wearing a marijuana leaf pendant and a T-shirt that read, “Hemp can save the planet.”

There are medical marijuana users “doing real dumb things,” Murphy acknowledged, but “that’s why stereotypes exist — those are the people you notice.” Regulations need to be written to better control medical marijuana, but it shouldn’t be banned because it helps too many people, she said.

Two police patrol cars showed up about half an hour before Murphy and other protesters arrived at the park, and one officer remained on the scene late in the afternoon. No incidents were reported.

Petition gatherers were at other locations in Billings and across the state this week, but Murphy said she didn’t know if pro-pot protesters would be trying to spread their message anywhere else. There were nine or 10 protesters at Centennial Park.

“We’d love to have more people here, but all of our patients work,” she said.

Medical marijuana supporters picket across from petitioners gathering signatures to repeal Montana's medical marijuana law at Centennial Park on Billings' West End this afternoon. Check back for more photos and a complete story.

A medical marijuana supporter gives a thumb up to protesters at Centennial Park as opponents collect signatures for a petition to repeal the Montana medical marijuana laws Wednesday afternoon.
© Copyright 2021 Billings Gazette, 401 N Broadway Billings, MT | Terms of Use | Privacy Policy
Powered by BLOX Content Management System from TownNews.com.
You don't have any notifications.