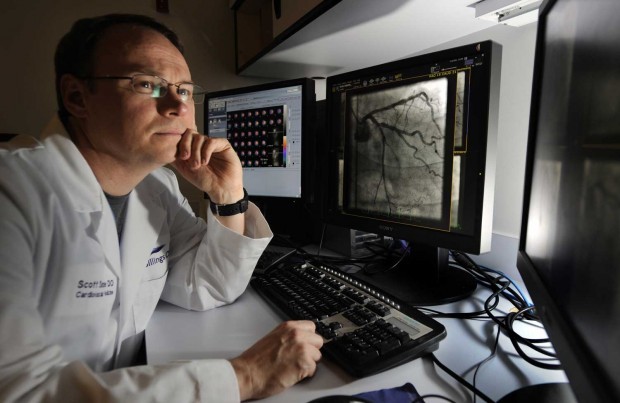 Dr. Scott Sample is an osteopath who works as a cardiologist at Billings Clinic. Although Sample’s practice is predominantly technical — driven by images and film — he feels his osteopathic training has enhanced his approach. 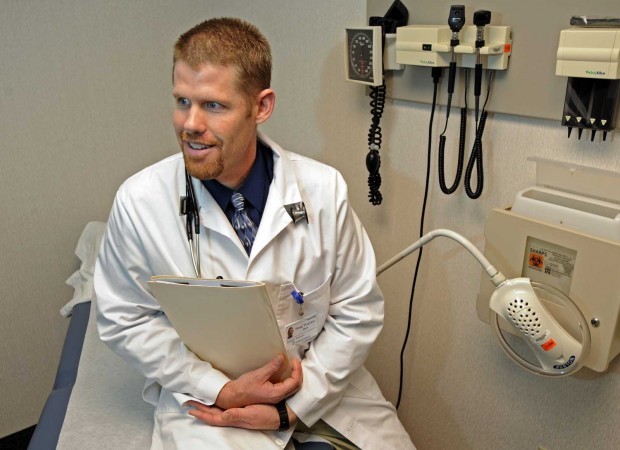 Dr. Doug Woerner, D.O., which signifies doctor of osteopathic medicine, talks about his education and the difference between M.D.s and osteopaths. 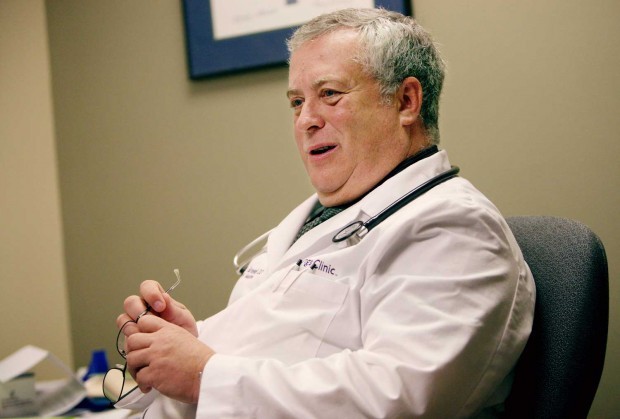 Before starting college, Dr. Doug Woerner hadn’t a clue what D.O. stood for. Now the Laurel native is one.

“I had no idea what they did,” Woerner said recently. “But the more I looked into the profession, the more I liked it.”

The initials D.O. signify a doctor of osteopathic medicine, a profession that dates to 1874. That’s when Andrew Taylor Still, a medical doctor, pioneered the concept of “wellness.” Dissatisfied with the medical treatments of his times, Still recognized the body’s ability to heal itself and stressed a holistic approach that included preventive medicine and a literal hands-on method for diagnosing illness and injury.

More than a century later, osteopaths still represent a small minority of Montana’s physicians. So when Woerner returned home to practice at the Laurel Medical Center, he figured his patients would have plenty of questions.

“But I can probably count on both hands the number of times I’ve been asked about it,” he said.

For more than three decades, Montana’s osteopaths have worked as full-fledged doctors on a par with those holding a doctor of medicine degree. Both types of physicians spend four years in medical school, complete residency programs, pass comparable licensing examinations and are fully accredited to practice in licensed hospitals and medical centers.

Dr. Don Grewell, a D.O. at Billings Clinic West and executive director of the Montana Osteopathic Medical Association, has been certified by both M.D. and D.O. family medicine boards. Like Woerner, he’s had few patients inquire about the initials after his name. No doubt many patients of osteopaths never notice.

Though osteopaths are more likely to gravitate toward primary care, they have the same opportunities to specialize and go on to practice any type of medicine, from oncology to psychiatry.

Yet there’s good reason that the initials don’t ring a bell with many Montanans. The state was one of the last to give full privileges to doctors of osteopathic medicine. According to the American Osteopathic Association, Montana passed its unlimited practice law in 1971 — seven decades after California and half a century after Wyoming.

That likely explains why, of Montana’s 2,100-plus physicians, the AOA lists only 148 osteopaths in active practice. In some states, like Michigan and Oklahoma, nearly one in five practicing physicians is a doctor of osteopathic medicine. Nationwide, roughly 67,000 osteopaths represent about 10 percent of the physician population.

Woerner attended medical school in Kirksville, Mo., home of the country’s first osteopathic college. M.D.s were in short supply there, he said, laughing as he tells about a sign at a Kirksville clinic that listed the names of several osteopaths and only one M.D.

“In parentheses, after the M.D. it said ‘medical doctor,’ ” he said.

A study in interconnections

While the two medical degrees offer identical opportunities, there are a few notable differences in medical training. The D.O. schools place extra emphasis on the study of the interconnections between muscles, bones and nerves. In theory, that focus provides students a better understanding of the ways an illness in one part of the body might affect another.

Grewell, however, is quick to dispel the notion that the integrated approach is unique to osteopaths. Nor do osteopathic physicians have exclusive rights to the “less is more” philosophy, he said.

“It’s more about the humility we should have in treating the patient, not ignoring the body’s ability to heal itself,” he said. “It’s the idea of tweaking some, rather than taking over. But I don’t think any physician of any quality – D.O. or M.D. — doesn’t understand that.”

What is unique to the D.O. curriculum is the teaching of “OMT,” or osteopathic manipulative treatment. The hands-on care involves stretching, gentle pressure and resistance to muscles and joints. The method is used for diagnosing, treating and even preventing illness. As Grewell describes it, OMT is somewhat akin to physical therapy. While all D.O. students receive training in OMT, not all go on to incorporate the technique into their practices.

Grewell is more likely to use manipulation with patients who suffer from minor musculoskeletal problems.

“If I can see someone two or three times and manipulation and anti-inflammatories will help them, I use it,” he said. “If someone needs longer term physical therapy or other musculoskeletal treatment, I usually refer them.”

A different kind of cardiologist

Scott Sample, an osteopath, represents a minority within a minority, particularly in Montana. Sample is an “interventional cardiologist,” meaning he practices invasive techniques such as angioplasty and implanting stents.

Of the 130 or so students in his medical school class, only three specialized in cardiology.

“That’s a disproportionate number,” he said.

As a youth, Sample was impressed by two osteopaths, both of whom were family friends. One, David Forrester, was the first osteopathic physician trained in cardiac surgery at Ohio’s Cleveland Clinic. Determined to follow in his footsteps, Sample applied to medical school with the intent of specializing in cardiology.

Like many of his classmates, Sample was drawn by the holistic philosophy of osteopathic medicine. When it came time for residency, however, he interned with allopathic physicians (M.D.s) at a military hospital. Ultimately he went on to earn M.D. and D.O. board certification.

Although Sample’s practice is predominantly technical — driven by images and film — he feels his osteopathic training has enhanced his approach. He also credits his knowledge of the musculoskeletal system for providing additional clues when making a diagnosis. For example, he said, pain patterns in the back can reflect angina in the heart.

In keeping with the osteopathic tradition, Sample considers not only the patient’s heart function but how it affects the patient’s view of himself.

Some say osteopathic schools accept a different type of student. Woerner, who started medical school at age 29, fits the “nontraditional” mold that is fairly common among D.O. admissions.

“They tend to be slightly older, slightly more seasoned,” he said.

D.O. schools are also known for welcoming women and minorities, in accordance with Still’s original vision.

For many, D.O. school represents a second career. Before entering medical school, Grewell earned a business degree, worked for the postal service and then went through pilot training with the National Guard. Woerner earned an undergraduate degree in ag and worked as a ranch hand before devoting himself to osteopathic medicine. His class in Kirksville included a ski instructor, a fishing guide, a woman who just celebrated her 21st birthday and one woman in her 60s.

“D.O. schools have a reputation for accepting those kinds of students,” he said.

In general, admission requirements may not be as stringent for D.O. schools, though that is changing. Rather, it’s generally accepted that D.O. schools look at the whole applicant and place less emphasis on his or her statistics.

“For whatever reason, they didn’t pass the (M.D.) litmus test,” he said.

Tyler Hurst, a 2007 graduate of the University of Montana, was given his white coat during a ceremony this summer at Rocky Vista University College of Osteopathic Medicine outside Denver. The white coat tradition symbolizes the beginning of a medical student’s journey toward becoming a physician

Hurst, who sometimes skips lunch in favor of working in the cadaver lab, is one of the up-and-coming students in the new school’s second class. He was awarded the Chancellor’s Scholarship, which not only helps pay for his schooling but, upon graduation, also requires him to devote a number of years to primary care. And that fits his plans well, because he was already leaning toward practicing in some underserved region in the mountain West.

Their numbers, too, are increasing at a much faster clip than allopathic physicians. From 1980 to 2005, as the annual number of new M.D.s remained fairly constant, the number of osteopaths jumped by more than 140 percent.

From the beginning, osteopaths have struggled for recognition

From its inception, osteopathic medicine has been the target of skeptics. Although a medical doctor, Dr. Andrew Taylor Still, founded it after…

Dr. Scott Sample is an osteopath who works as a cardiologist at Billings Clinic. Although Sample’s practice is predominantly technical — driven by images and film — he feels his osteopathic training has enhanced his approach.

Dr. Doug Woerner, D.O., which signifies doctor of osteopathic medicine, talks about his education and the difference between M.D.s and osteopaths.