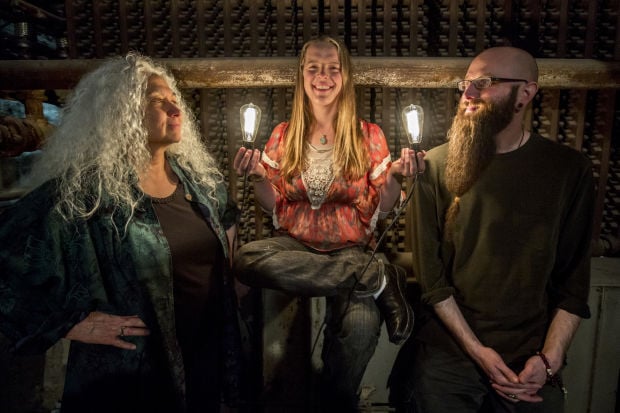 Susan Powell, Sharli Kiner Ziebarth, and Jim Nymeyer pose for a portrait in the basement of the Babcock. 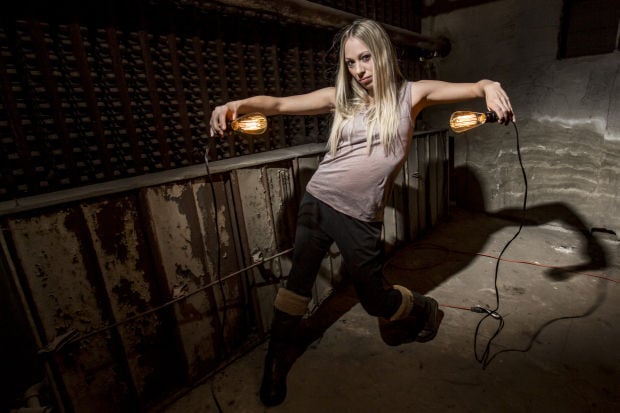 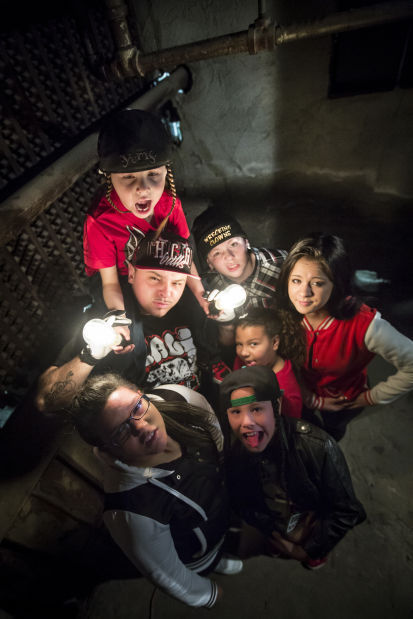 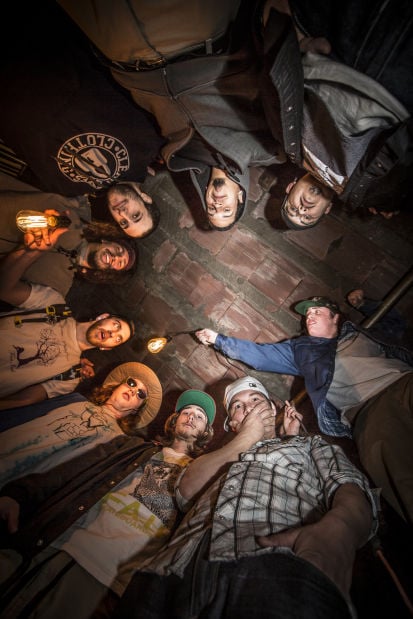 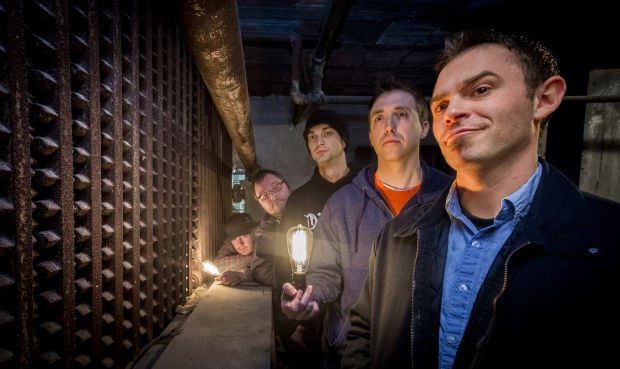 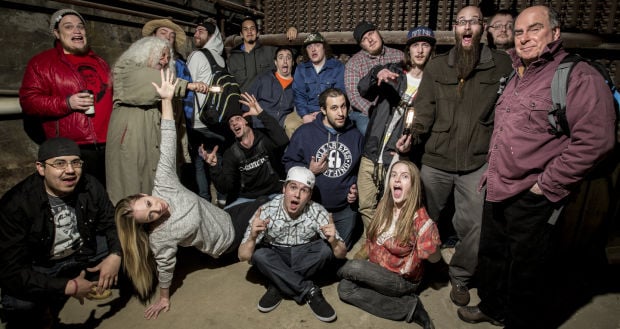 Susan Powell, Sharli Kiner Ziebarth, and Jim Nymeyer pose for a portrait in the basement of the Babcock.

Billings is thirsty for cultural and artistic diversity and that is pushing the underground scene here into the sunshine.

Fringe theater companies, graffiti artists and performing artists are all finding a growing audience to support their efforts.

“Bold and raw with just a touch of recklessness” is how Patrick Wilson describes his Sacrifice Cliff Theatre New Works Festival, which is scheduled for next weekend. Performances will take place in Donna Ayer’s music studio on North 20th Street and admission is pay what you will. With no royalties and no rent, it works.

“As Billings keeps growing, I think we’re going to see our niche scene growing,” Wilson said. “People are coming here from other places around the country and they expect more cultural diversity. How can we adjust to that?”

“Sacrifice (Cliff Theatre) is an alternative venue for works that you wouldn’t see at BST or NOVA,” Gage said.

Two other new theater companies have also sprung up over the past two years — Prince Theatre, which presents plays at local hotels, and Backyard Theatre, which has produced shows in a backyard and a yoga studio.

Attitudes are changing toward different cultures and alternative forms of entertainment.

When Barjon’s Books and Music opened in 1977 in downtown Billings, some folks crossed the street rather than walk directly by the store because people were concerned that Barjon's offered books about alternative healing and religion, said owner Jim Nymeyer. Now, Barjon’s is a thriving business and a cultural center of town. It is located at 223 N. 29th St.

“People in Billings want more cultural diversity, and I want to make sure I’m doing everything I can to help with that,” Nymeyer said.

Nymeyer is working with Limber Tree Yoga Studio owner Sharli Kiner to move the Art and Soul Festival to downtown Billings on summer solstice June 21. The juried art and healing art event has been held for the past several years at the Shrine Auditorium.

The festival will feature chalk art, workshops, lectures, films and a special Tibetan dinner at the First Congregational Church as a benefit for the Tibetan Children's Education Foundation in Helena. Nymeyer is also planning to open a tea shop later this year where he can offer poetry readings and live acoustic music.

“I think that my role is to provide a space for people. I want to contribute to a collaborative community coming together downtown,” Kiner said.

The Downtown Business Alliance is working with businesses like Barjon’s to make the downtown area more inviting to pedestrians and shoppers. One way to do that is to increase public art. Tyson Middle, owner of Underground Culture Krew, a street art shop and gallery on Third Avenue North, is among the artists selected to design and decorate one of six electrical boxes in downtown Billings. He’s been working to convince city officials to erect a “legal wall” at the skate park for artists to decorate with spray paint.

“It’s slightly discouraging. Why can’t we just do it? It took years and years to get the skate park in Billings, so I guess we’ll have to be patient.”

Since opening his shop in February 2013, Middle said interest in street art or graffiti art has grown. Sometimes Middle gets blamed for his customers tagging public and private property and occasionally a police officer stops by to ask Middle to help identify gang symbols. Quoting from the city’s website, Middle points out that complaints about graffiti were actually more plentiful in 2007, which was years before he opened his store.

“Everyone loves the graffiti art, but they hate the tagging,” Middle said, adding there is a big difference between art and writing swear words on the wall.

Middle has been active in promoting street art at local community events, including the Yellowstone Art Museum’s Summerfair, Strawberry Festival and Alive After 5. He stretches plastic wrap between trees or posts and hands out spray paint so youngsters and adults can cut loose. He’s considering marketing graffiti paint parties for kids’ birthdays because the public spray events are getting so popular.

“When we did Alive After 5 last summer, we had lines of people who wanted to paint. There were kids too young to push down the button to spray paint. Then pretty soon, the kid is bored and Dad’s over there spraying, really getting into it.”

The Wrecking Clowns Crew was founded by Jeff Lakal Taufagu and his mom Rose Lakal after Taufagu sustained head injuries when he was severely beaten near his home in the Heights. Taufagu decided to use hip hop to promote a message of nonviolence. He’s kept his dance company growing since it was formed in 2010 with rehearsals in his Heights garage. They have since competed on a national level and now have practice space at 2812 Minnesota Ave.

“No matter what your struggle is, spin on your head and it will be better,” Taufagu said.

They practice seven days a week from 6 to 8 p.m. Anyone can join.

Poetic Intelligence has 10 members, ranging in age from 18 to 27. The group focuses on positivity, said member Chez Romero.

Stormy Knight founded the group in 2012 as a collective of rappers who wanted to give people a different style, other than gangster rap.

“We are trying to revolutionize hip-hop around Montana and the U.S.,” said Romero.

Romero, whose stage name is ProdigaL, is the great nephew of Chan Romero, who grew up in Billings and became famous when his song “Hippy Hippy Shake” was recorded by John Lennon.

The professional Terpsichore Dance Company has attracted such an audience that it added a show to its recent program at the Babcock Theatre and even though there was subzero weather the day of the performance, the second show exceeded expectations. Terpsichore founder Ricki Lu Feeley re-formed her Missoula dance company in Billings in 2010 after moving here.

“It was a really hard decision for me because Missoula is amazing with so many supporters and dancers. When I came to Billings I didn’t think anyone would even know what modern dance is.”

Feeley said an important aspect of her mission is to teach youngsters, which led to the formation of a junior modern dance company.

“I hope we are mentoring them and giving them a place to go that is safe,” Feeley said.

There are several ways to participate or watch a performance by local underground arts groups.

The Wrecking Clowns Crew, a local hip-hop dance company, practices every night from 6 to 8 in the building next to the Montana Rescue Mission, 2812 Minnesota Ave.

Poetic Intelligence is presenting Hip-Hop at Hudson's, located at 2658. The Billings hip-hop group will perform and offer an open mic for those 21 and older. There is no cover charge.

The Art and Soul Festival will be held on June 21 in downtown Billings with juried vendors, food, and art for sale on North 29th Street.

An idea to identify, help finance and dedicate a building where artists could live and work is being given new life by proponents who met for …