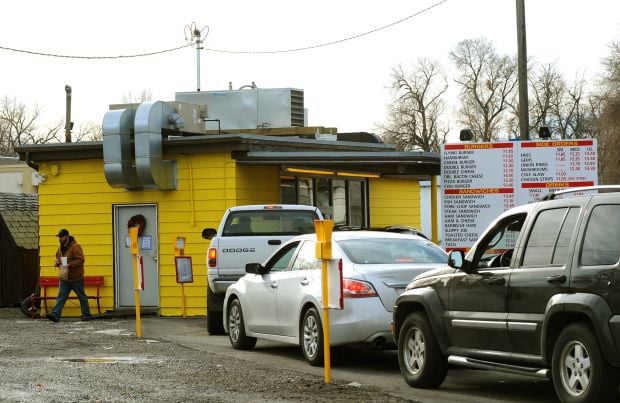 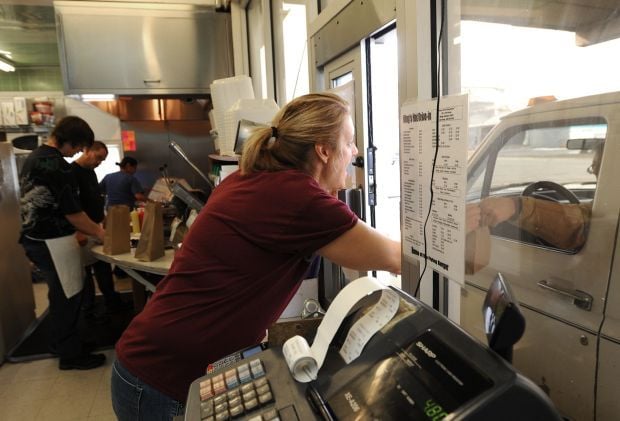 Vicki Hodgson hands lunch to a customer at the The King's Hat Drive-In. 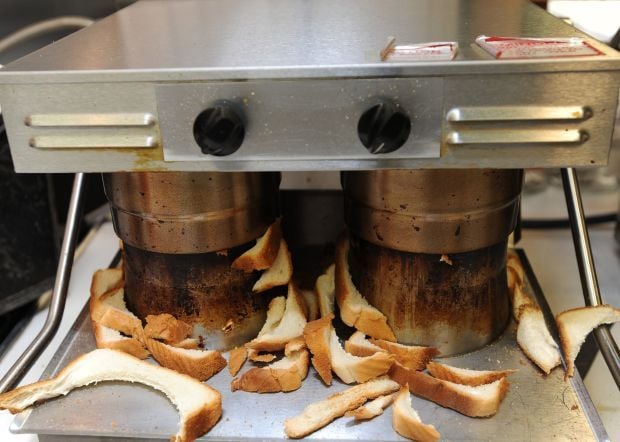 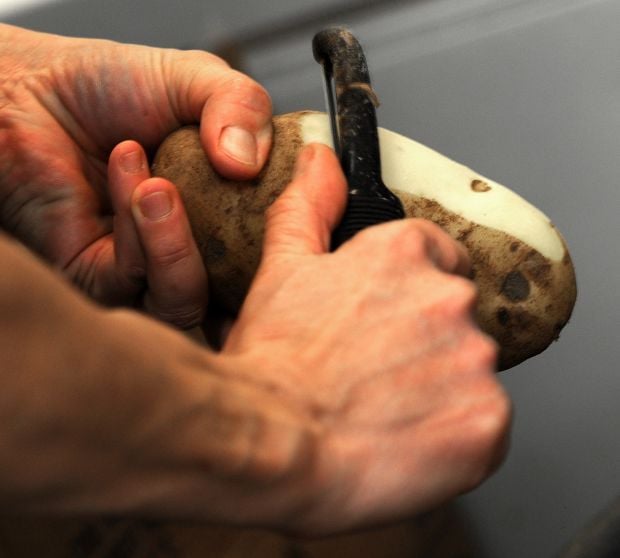 Potatoes are peeled for fresh-cooked French fries at the King's Hat Drive-In, a Billings institution. 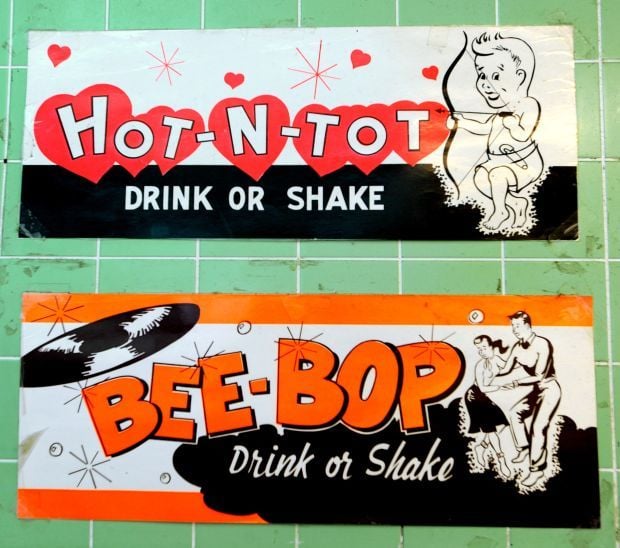 Bee-Bops and Hot-N-Tots are still available at the King's Hat Drive-In. 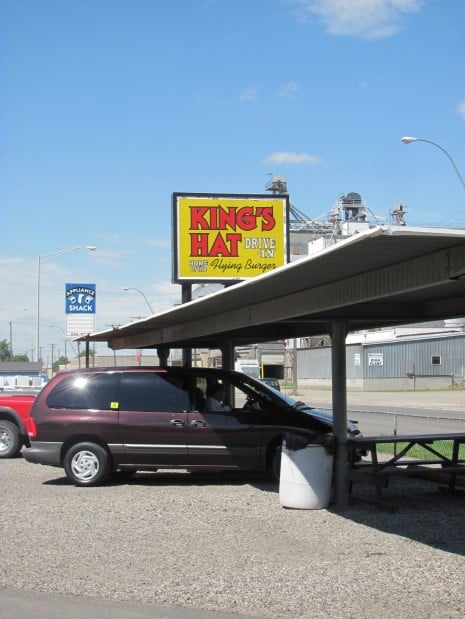 The King's Hat Drive-in has been a favorite summertime dining destination in Billings for decades -- before 1977, it's name was the South Side Drive-in. 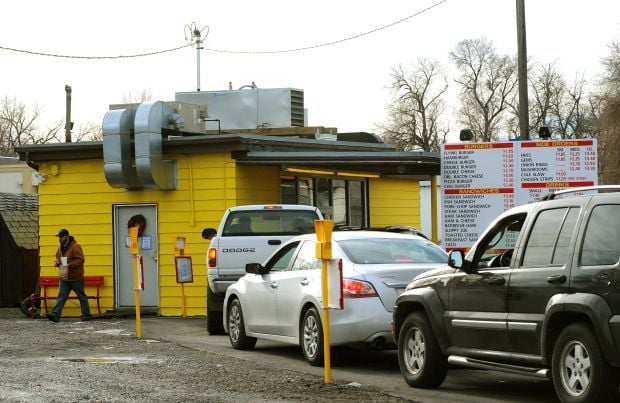 Jim and Vicki Hodgson don’t mind chatting while they complete their morning prep work at the King’s Hat Drive-In on Billings’ South Side.

Jim fries Montana-made bacon and blanches homemade french fries; using her strong left arm, Vicki employs an old-fashioned slicing machine to transform up to 200 pounds of just-peeled potatoes into the thin strips that Jim will later use for the fries.

One morning this week, she’d already prepared batches of the “loaded sauce” that gives King’s Hat food that down-home taste.

In a scant two hours, the Hodgsons and their three employees will be busy filling orders in the same way previous King’s Hat teams have done over the past six decades.

No time to talk about the “secret sauce” that has made the King’s Hat a popular look back to the halcyon era of America’s drive-ins.

The Billings couple just celebrated their fourth anniversary of owning the drive-in, a throwback to days when food was cooked only after it was ordered and terms like “Hot-N-Tot,” “Flying Burger” and “Bee-Bop” sprinkled the menu.

“I would really like to see old pictures of the place when it was an original,” Jim said. “It used to have a white picket fence and embossed enamel signs. I’d like to see about that” so that the King’s Hat can somehow be even more authentic than it already is.

After all, where else can one purchase — and then cheerfully wolf down — a Flying Burger?

Said burger comes out of what the Hodgsons call, simply, “the Flying Burger Machine” looking, well, like a flying saucer. The machine crimps the bread around the burger and its toppings into a tidy handful that looks like the spaceship George Jetson once used to commute to his job at Spacely’s Sprockets.

At $1.85 — 30 cents more with cheese — the flying burger is the drive-in’s signature menu item. Why, Jim is often asked, is the product that plops from the palm-operated machine such a hit?

“When you’re driving down the road, you can bite right into it, and you don’t have stuff dripping in your lap,” Jim said.

Candra Vasquez, who at 28 is one of the King’s Hats three hired hands, said she fondly remembers coming to the drive-in as a child.

“My parents used to take me here,” she said. “It was like going to Disneyland.”

Nowadays, she said, she frequently waits on the next generation of Vasquez family members and friends who pull up to the drive-in’s driveway knowing they’ll get a tasty product cooked the same way that their forebears used to enjoy.

“My aunt’s friend lives in New York,” she said. “When she comes for a visit, this is the first stop she makes in Billings.”

Vicki chalks up the popularity of the King’s Hat to word of mouth — including Facebook — and nostalgia. Why order a soft drink or shake when you can instead have a Bee-Bop, which spices the drink with rum flavoring? Or, especially on a colder day, folks might enjoy a Hot-N-Tot drink or shake, which simply indicates a hint of cinnamon.

“Customers tell us all the time they remember the place when it first started,” Jim said. While much of the King’s Hat business is made up of workers out on their lunch or dinner break, the bulk of Saturday diners are tourists and families, he said.

“I love our customers. I’m the one out front taking their money and helping them,” Vicki said. “You very rarely get a not-nice customer.”

Jim said he typically stops by Sundays to clean and change the grease. On Monday, Vicki does as much prep work as she can.

“Do we look forward to weekends? Yes we do. It’s hard work,” she said.

Occasionally, the Hodgsons can take a day or two to watch their daughter, Samantha, a pre-med student at the University of Montana, compete as a thrower for the Grizzlies’ track and field team. But those opportunities depend on how seasoned the crew is — and most of the current crew does indeed have years of experience.

“If we have a staff who knows just what to do, we will take off,” Jim said. “If not, one of us will take off.”

With a lone sibling preparing for a career in medicine, it’s not likely the King’s Hat has a Hodgson family succession plan. But if the owners listen to popular demand, the King’s Hat one day could birth, say, a Prince’s or Princess’s Hat.

“We get people asking us to open in the Heights or West End,” Jim said, shaking his head as he turns the aromatic bacon using a pair of metal spatulas.

But that popular demand may not be just a pipe dream. While summer is the peak season, the King’s Hat has also done well this fall, Vicki said.

“Business is awesome,” she said. “People who grew up here might fly in or drive in, and pretty soon they come for a visit.”

One thing won’t change — the King’s Hat will never feature servers on roller skates, the way some of their contemporaries served up meals during the 1950s.

“That’s too much of a liability,” Jim said. “We have gravel, not pavement.”

The Hodgsons encourage customers to call 259-4746 10 minutes in advance so that they can fill orders for diners on the go.

The King’s Hat is at 105 S. 37th St. The hours are 10-7 Tuesday through Friday and 11-7 every Saturday. The restaurant is closed Sundays and Mondays.

Beginning March 1, the King’s Hat stays open an hour later Tuesday-Friday, but not on Saturday.

Every generation has its beloved eateries. If you grew up in Billings, chances are, you'll remember at least a few of these restaurants that h…

Our first gallery of restaurants was well received, and readers told us some of the places they miss most. Here is a list of 15 more Billings …

Once again, we take a look at some Billings restaurants that have closed over the years.

Vicki Hodgson hands lunch to a customer at the The King's Hat Drive-In.

Potatoes are peeled for fresh-cooked French fries at the King's Hat Drive-In, a Billings institution.

Bee-Bops and Hot-N-Tots are still available at the King's Hat Drive-In.

The King's Hat Drive-in has been a favorite summertime dining destination in Billings for decades -- before 1977, it's name was the South Side Drive-in.