At Standard Auto Sales, about 40 to 50 cars usually crowd the lot, but recently, about 25 were available.

After the economic shutdown earlier this year in response to COVID-19, car sales have boomed in Billings through July and August. But as those vehicles have sold, there’s little new or used inventory available to replenish lots.

When COVID-19 started to spread, many businesses shut down, including new car manufacturers. That left a nationwide shortage of new cars that forced many dealerships and car lots to hold on to their used car inventories, which has also hurt independent used car lots and vehicle auctions, according to Camilla Haynes, executive director of the Montana Independent Automobile Association.

At Standard Auto, sales were above average for July and August, so car lot owner Jimmy Weinberger has had to get creative to find more vehicles.

Many dealership owners often find their used car inventory at auctions, franchise dealerships, or from out of state, and Weinberger said he worries daily about replenishing inventory.

The Billings Public Auto Auction has offered 130 to 140 cars every summer auction day during the past 10 years. But, recently there’s a struggle to get 70 to 80 cars, according to auction owner Craig Gould.

“The other thing we’re finding is the new car stores are holding onto their used car inventory and not sending them to auction because they can’t find used cars for their car lot either,” Gould said.

“It’s difficult,” Weinberger said. “I go out to the auction and find something I like, then just shake my head when I can’t get nothing. And that’s every week I do it, just to try to get something.”

Weinberger looks for used cars at auctions in other states. So far, he’s been looking to Arizona for help, and out of the 30 cars he considers, he usually gets about five for his lot.

In March and April, Weinberger slashed prices on his lot due to the possibility of a car industry crash caused by COVID-19. For a few weeks, business was slow as residents sheltered in place.

But people soon went back to car shopping using their stimulus checks and tax return money. The industry didn't crash, and Weinberger sold a lot of cars, although he didn't make much of a profit.

Trying to make a profit

Not only are fewer cars available, but the prices at auction have increased to retail value, according to Gould. About a month ago, National Automobile Dealers Association reported an overall increase in car value of up to $2,500 for later model used vehicles, Gould said. Weinberger said he's seen prices climb $1,000 to $4,000 "on a regular car that's nothing special." And that doesn't include the maintenance that needs to be done on a car before it's sold on the lot.

Normally, cars are bought at or below wholesale price at auctions, so that they can be sold at retail price.

“What’s happening now is that many cars are selling at a retail rate at the auctions, and as a result they've got to pass that onto consumers so cars are more expensive,” Gould said.

The average listing price for used vehicles in the U.S. climbed to $21,558 in July, marking a $708 increase compared to June, according to car-research site Edmunds.

Wholesale auction prices leveled off the week ending Aug. 16, ending 16 consecutive weeks of price increases, according to NADA data. Prices have grown 36% since April, and remain 15% higher than at the beginning of March.

This translates to a slim profit margin, according to Haynes with the Montana Independent Automobile Association, especially when it comes to customers looking to finance.

“The bank isn’t going to finance anything more on the buyers end than they can, so the profit margins are slimmer,” Haynes said.

And while some customers have expressed concerns over the price hikes, car lot owners acknowledge that those who typically look for cars can afford them and need them.

"The one thing I have come to realize about America is that we're very much an automotive culture and cars are a big part of us," Gould said. "Just because the pandemic is going on, doesn't mean people aren't hitting deer and getting in wrecks and cars (aren't) breaking down. All of those things are still happening whether there's a pandemic or not."

Weinberger said the cars on his lot are being sold at or a bit above retail price, but that doesn't stop people from buying.

"We're selling even Corvettes all the way up to big trucks. It's all across the board," he said.

Because factories were shut down for a few months earlier this year, the new car market is lagging behind, causing a decrease in the volume of new cars available to sell on lots, according to Nolan Fisher, general sales manager of the Lithia Chrysler, Jeep and Dodge dealership in Billings.

The dealership has been lucky in keeping inventory stocked, but Fisher said the business has also had to be creative in securing used cars. It's part of a chain that operates around 200 stores across the country, so trading inventory with other stores is a helpful option, Fisher said.

The dealership has been more active with closed-end lease auctions, and has purchased vehicles from as far away as Boston and Las Vegas. About 700 new and used cars are on the lot, which is about average, Fisher said. Of those, 200 are used.

Some new car models haven't been available with the volume of new cars down compared to previous years, Fisher said. Sales in July and so far in August at the dealership have been up, with fewer new car sales.

"We've had quite the amount to get us through but we've definitely seen an increase of customers from out of our area that are coming in because we happen to have the right inventory," Fisher said.

Used car prices are expected to continue to level off in August as demand wanes, with experts expecting prices to be slightly greater than pre-virus levels by year's end, according to NADA. However, there's uncertainty in the industry with the possibility of more virus outbreaks, another round of federal stimulus checks and continued changes in employment conditions.

"We're just going to keep doing what we do and provide a level of service that customers appreciate and want to continue doing business," Fisher said.

Paycheck Protection Program gave $1.8B to 22K Montana businesses. Who were they?

“If you want to find a bright spot, it's that this program was designed to get money out in a hurry, and it did that," said economist Paul Polzin, director emeritus at the University of Montana Bureau of Business and Economic Research.

Another 82 COVID-19 cases confirmed by testing were reported Monday morning in Montana.

North Dakota health officials are reporting one new death due to COVID-19 and a slight decline in active cases.

Construction of a new convention center, ballroom and hotel is underway on Overland Avenue.

In the early 1900s, entrepreneurs went to the Montana National Bank in Billings to request a loan to start their businesses. Soon, the buildin… 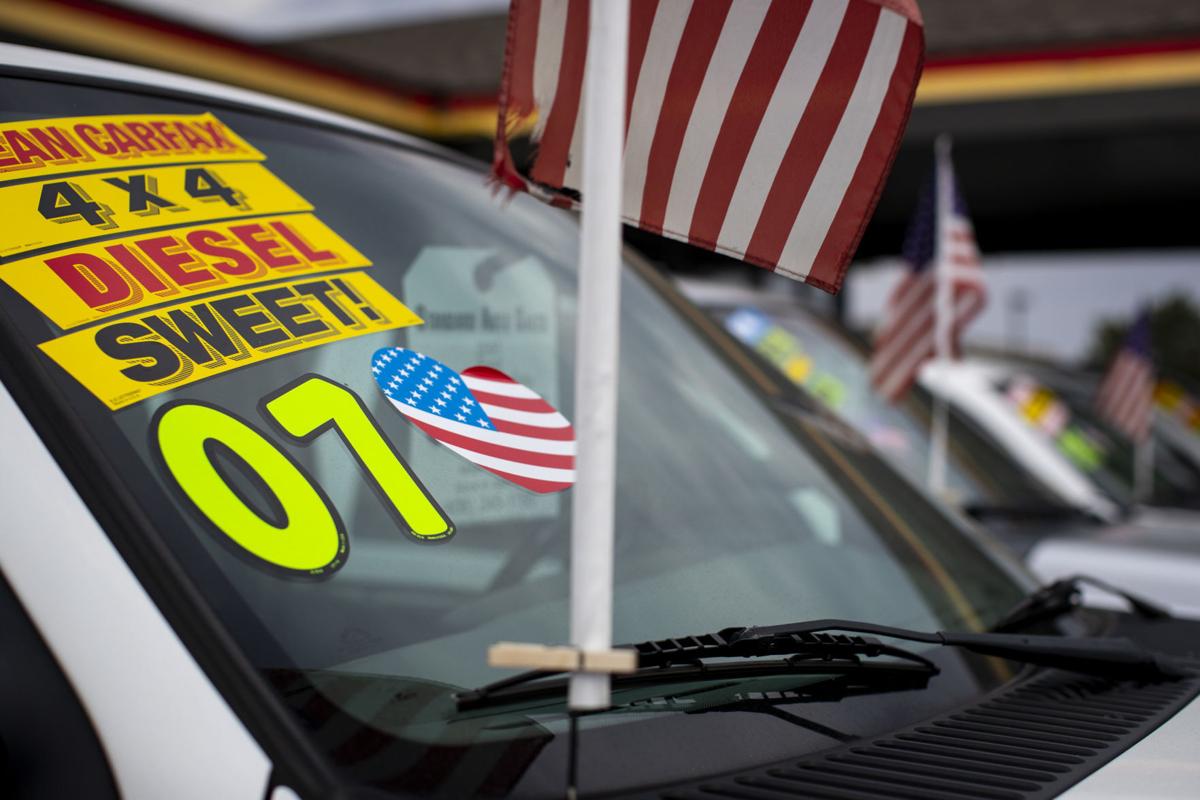 A sign on a 2007 Ford F-350 at Standard Auto Sales in Billings on Tuesday, Aug. 18, 2020. Standard Auto Sales' owner Jimmy Weinberger said the sales lot currently has about 20 vehicles fewer than it normally does due to a shortage in used vehicles. 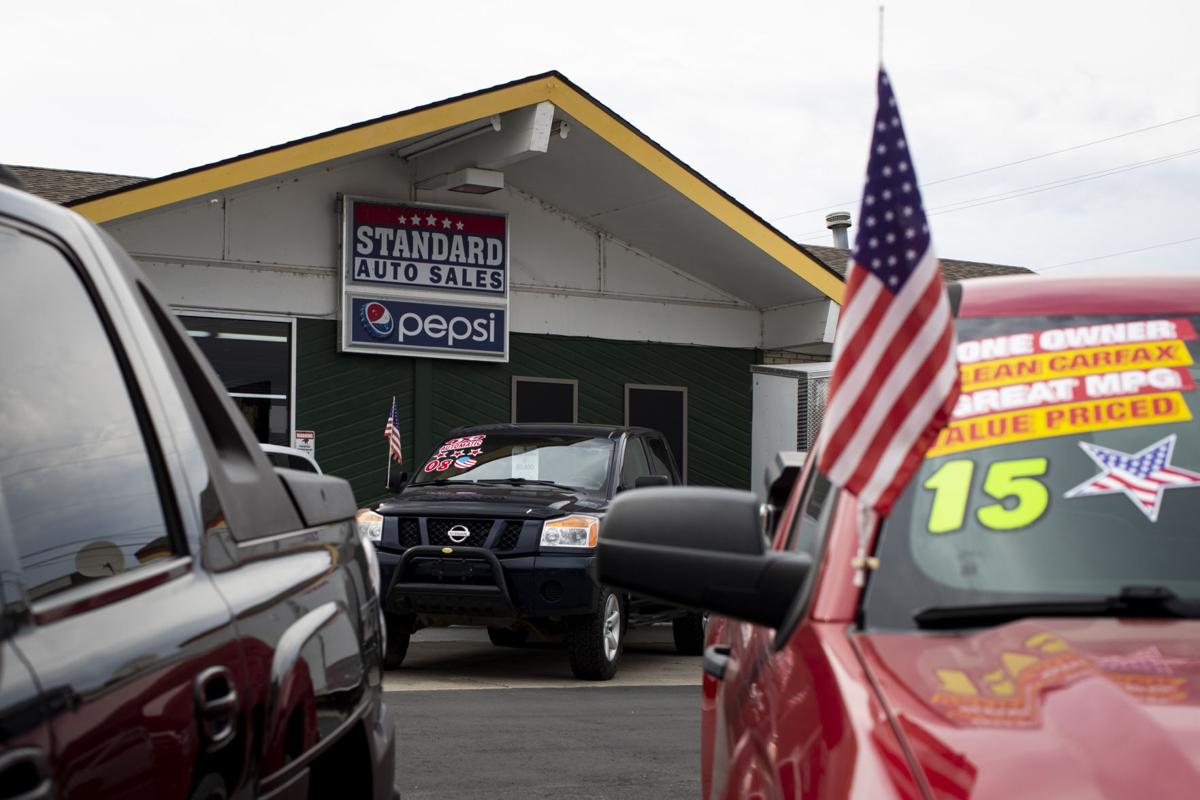 Trucks for sale outside of Standard Auto Sales in Billings on Tuesday, Aug. 18, 2020. Standard Auto Sales' owner Jimmy Weinberger said the sales lot currently has about 20 vehicles fewer than it normally does due to a shortage in used vehicles.