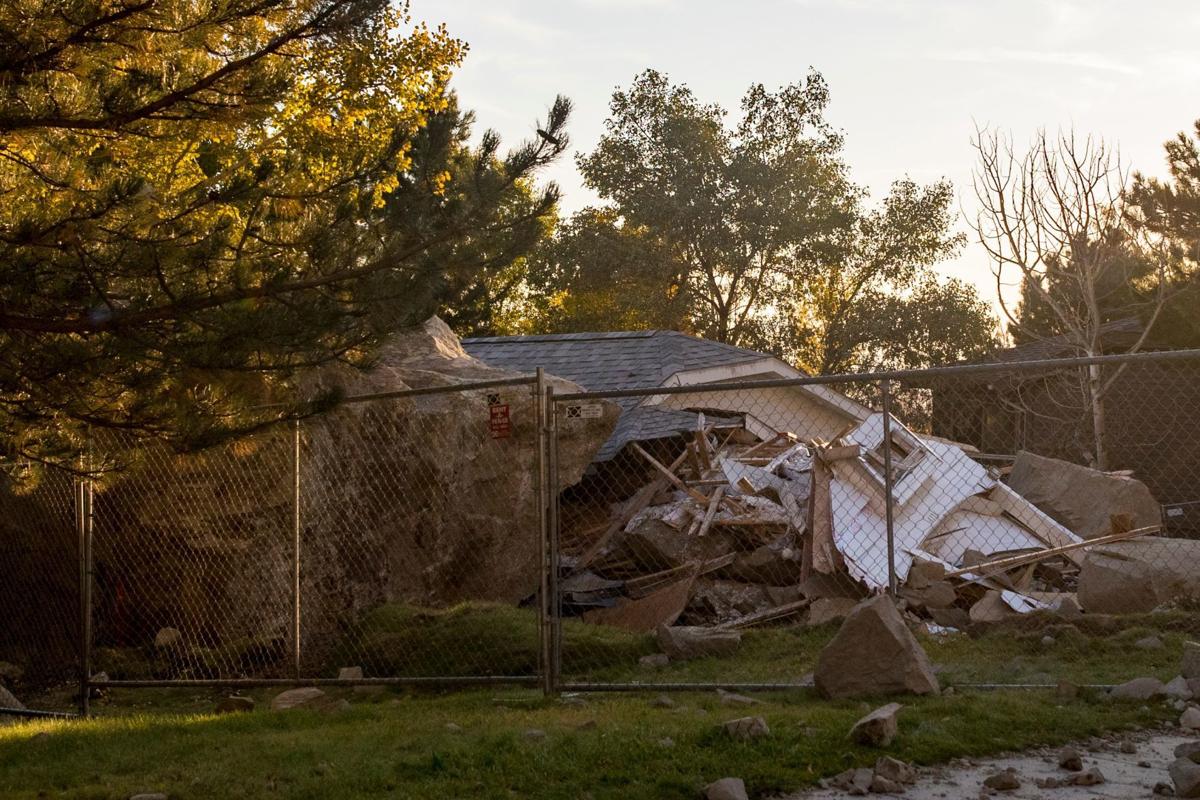 A large boulder sits among the remains of a home on Laredo Place near the corner of Westfield Drive on Wednesday. The damage is the result of a Sept. 21 rock slide. 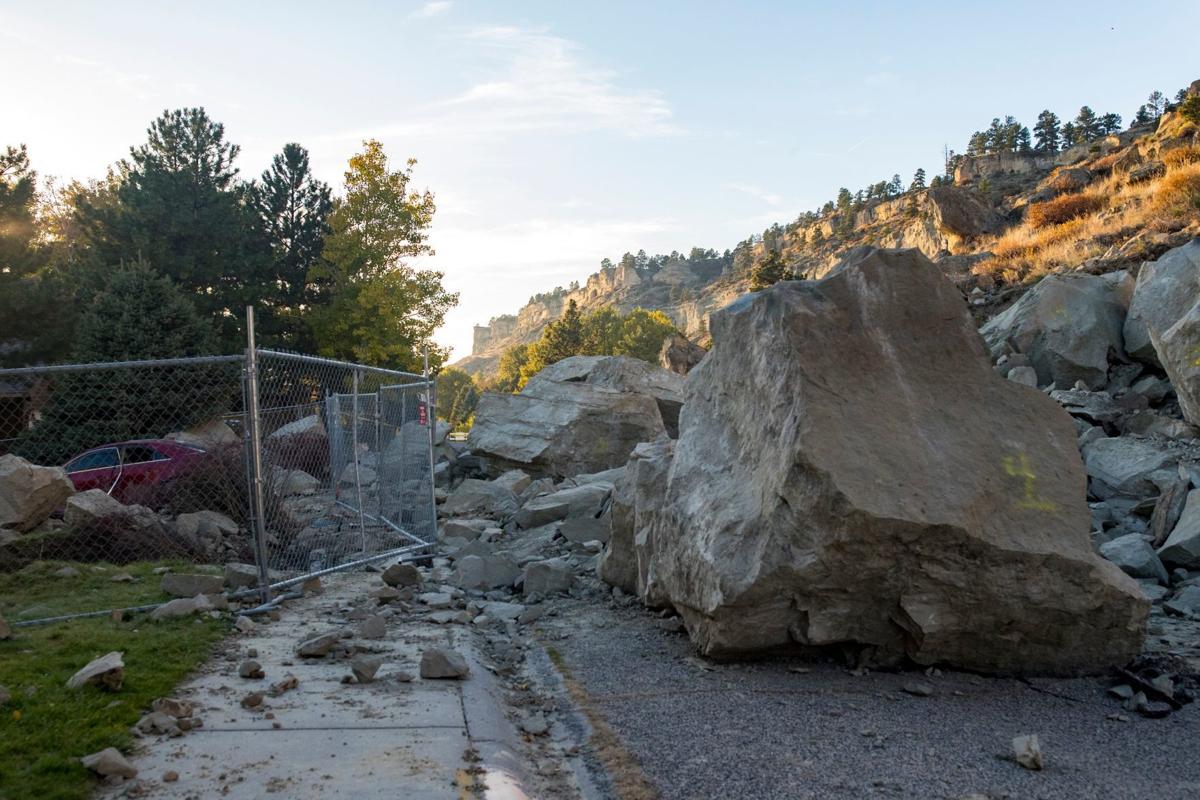 Large boulders block Laredo Place near the corner of Westfield Drive on Wednesday The rocks are the result of a Sept. 21 rock slide which destroyed one home.

He and his wife hid in a safe location in their home as they listened to what sounded like F-18 fighter jets flying above them. However, they knew that large boulders were falling into their neighborhood from the Rims nearby.

“It was pitch black and you couldn’t see anything,” Sutton said. “I just kept expecting a rock to come in and take the house out. Who knows what was going to happen.”

He later realized that the house next to him had been hit by one of the boulders, and went to help whoever was inside as the dust settled. Luckily, William Mercer, the man who owns the house that was crushed by the boulders was safe.

Since then, Sutton has been keeping up with the City of Billings and its plans to remove the rocks in the middle of the roadway and how it should address a few boulders still precariously attached to the cliff face of the Rims.

The boulders from the rock slide that happened on Sept. 21 are still in the middle of the road, leaving residents with one outlet.

The Billings City Council on Monday night voted unanimously to pass an emergency resolution waiving the requirement for advertising and competitive bidding for the rock work to be done.

The city is still trying to decide whether to pin the rocks to the cliff face, or to remove them entirely, which the city is reluctant to do because it would have no way to control how the rocks fall. Crews are worried that work required to break up and remove the rocks in the road could dislodge one of the hanging boulders.

The resolution will shorten the process and give city administrator Chris Kukulski signing authority of up to $200,000 for the work contract.

Sutton said that since the slide, any cracks or pops he hears in the house beside him or in the Rims above make him nervous. During the city council meeting, Sutton asked the city to knock down rather than pin the boulders.

“It’s (traumatic), with it still being up there,” Sutton said, referring to the biggest boulder still attached to the Rims.

One slab of rock has an apparent gap separating it from the cliff face, Sutton said, with tree roots growing through it and sticking out. Another smaller boulder to the west has the potential to come down as well.

“That’s coming down, it’s just a matter of when,” Sutton said.

Kukulski met with Laredo Place residents Wednesday evening for a weekly update on the rock removal process. Kukulski has been meeting with the neighborhood since late September.

According to Kukulski, the city owns the roadway, but parts of the Rims are owned by the city and other private parties. Who owns what is still being sorted out, he said.

The city sent out requests for proposals to qualified contractors to deal with the boulders on the cliff face, but extended the deadline on Wednesday for bidding to Oct. 25. Two contractors have made bids, while two more plan to visit the site for potential bidding.

Kukulski said that hearing recommendations from expert contractors on what to do with the boulders is important to moving forward.

“We want these professionals’ opinion on what should happen,” Kukulski said.

Requests for proposals will also be sent out later this week for a contractor to work on breaking up and removing the rock from the roadway. Residents near the rockslide site will take a survey documenting home conditions prior to rock removal.

Kukulski reminded residents that they should anticipate seeing city workers and contractors on site. The goal is to have contractors start their work as soon as possible.

Sutton has lived on Laredo Place for 20 years, and loves the neighborhood. However, if the boulders aren’t removed from the cliff face, he may consider moving.

“I’ve looked at the rest of (the Rims) and nothing else really bothers me,” Sutton said. “But if that chunk comes down, then I’d love to stay here. If it doesn’t, we have a hard decision to make.”

Steve Duganz and his wife woke up early Saturday morning to what sounded like an airplane crashing above them or a tree had fallen nearby.

A crew from Terracon removes rocks identified as unstable from the Billings Rims above Laredo Place.

Billings West End street cleaned up and resurfaced, to be open for traffic months after rockfall

The road has been blocked since Sept. 21 when a boulder the size of a small house split from the Rimrocks and parts of it crashed into a home.

A large boulder sits among the remains of a home on Laredo Place near the corner of Westfield Drive on Wednesday. The damage is the result of a Sept. 21 rock slide. 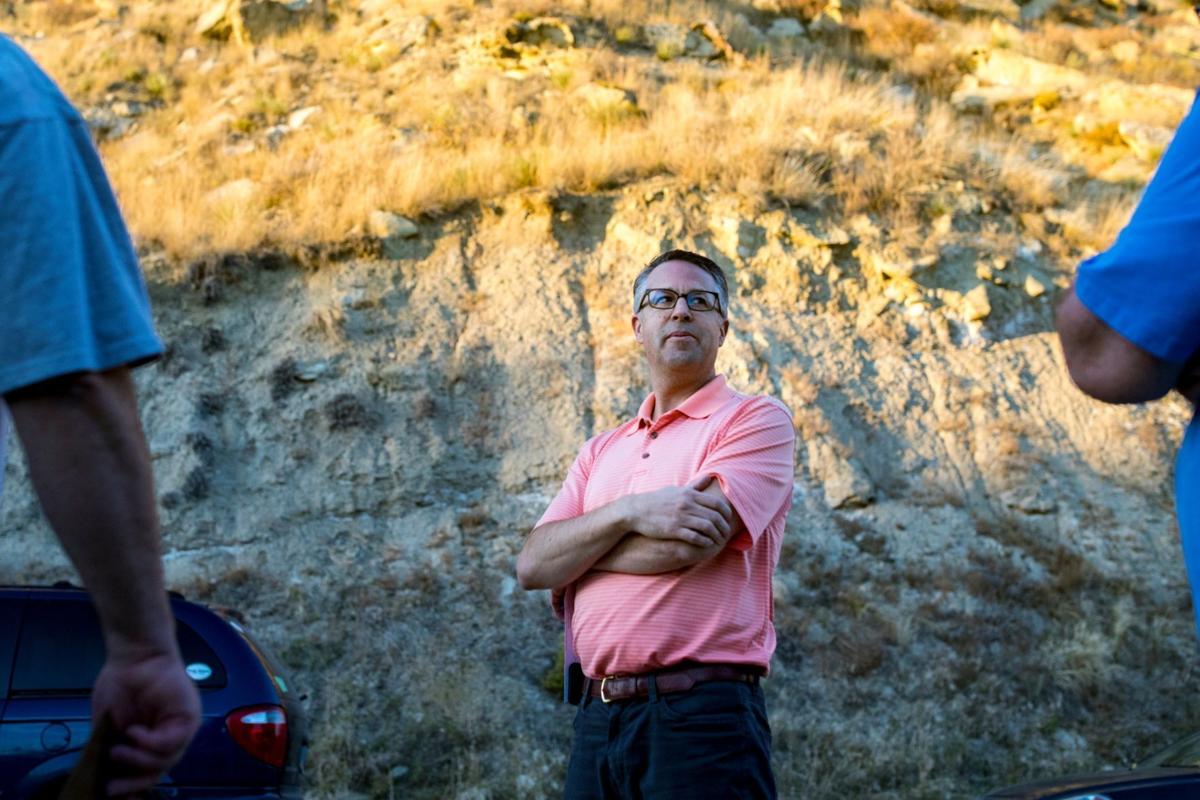 Large boulders block Laredo Place near the corner of Westfield Drive on Wednesday The rocks are the result of a Sept. 21 rock slide which destroyed one home. 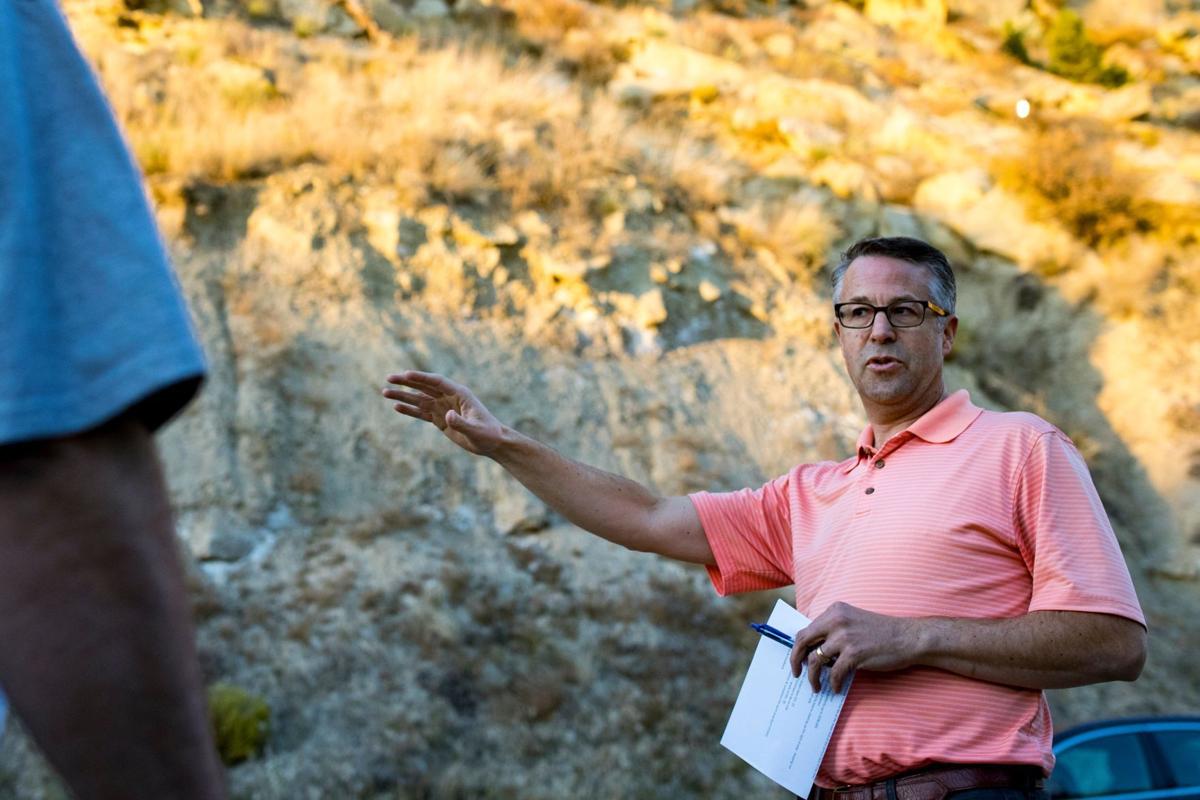 City administrator Chris Kukulski speaks to homeowners on Wednesday. The residents own homes on Laredo Place near the scene of a September rock slide which destroyed one home and left boulders hanging precariously from the rock face.