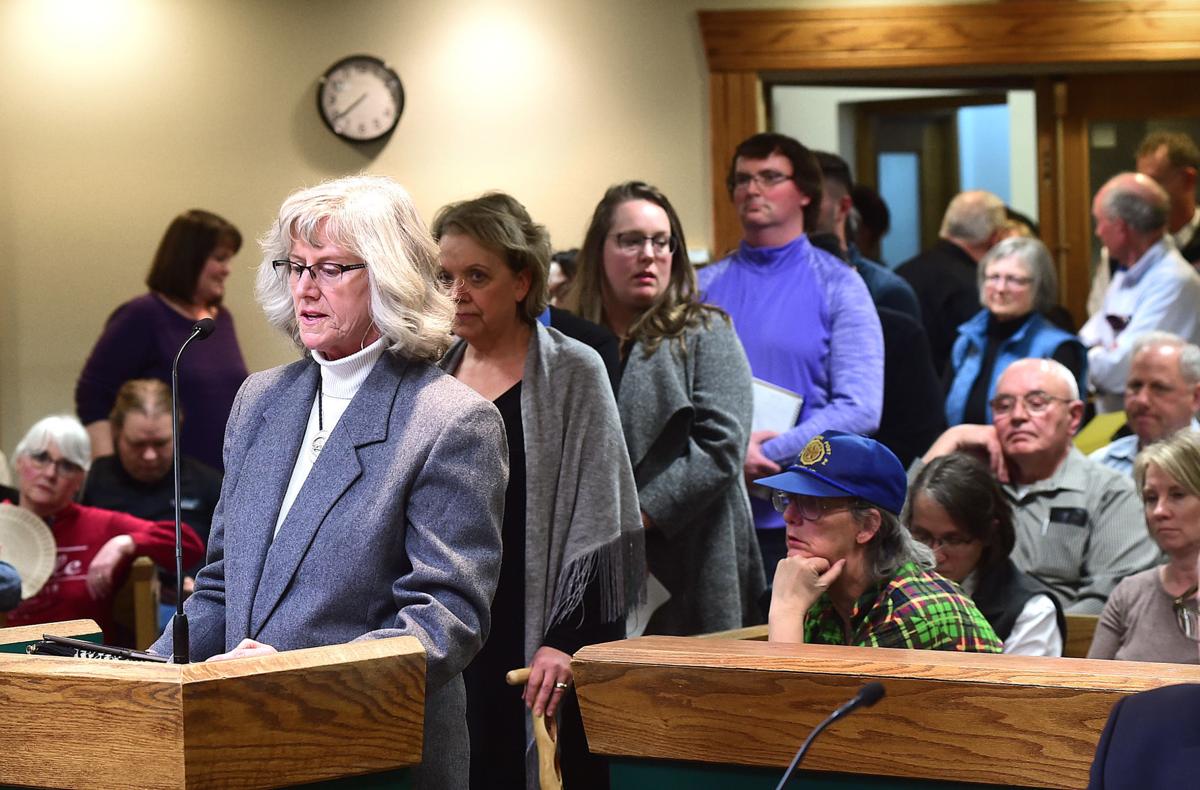 Robyn Driscoll, a former Yellowstone County Commissioner and member of the Montana House of Representatives and State Senate, was the first speaker in favor of an NDO at the Billings City Council chambers Monday night. 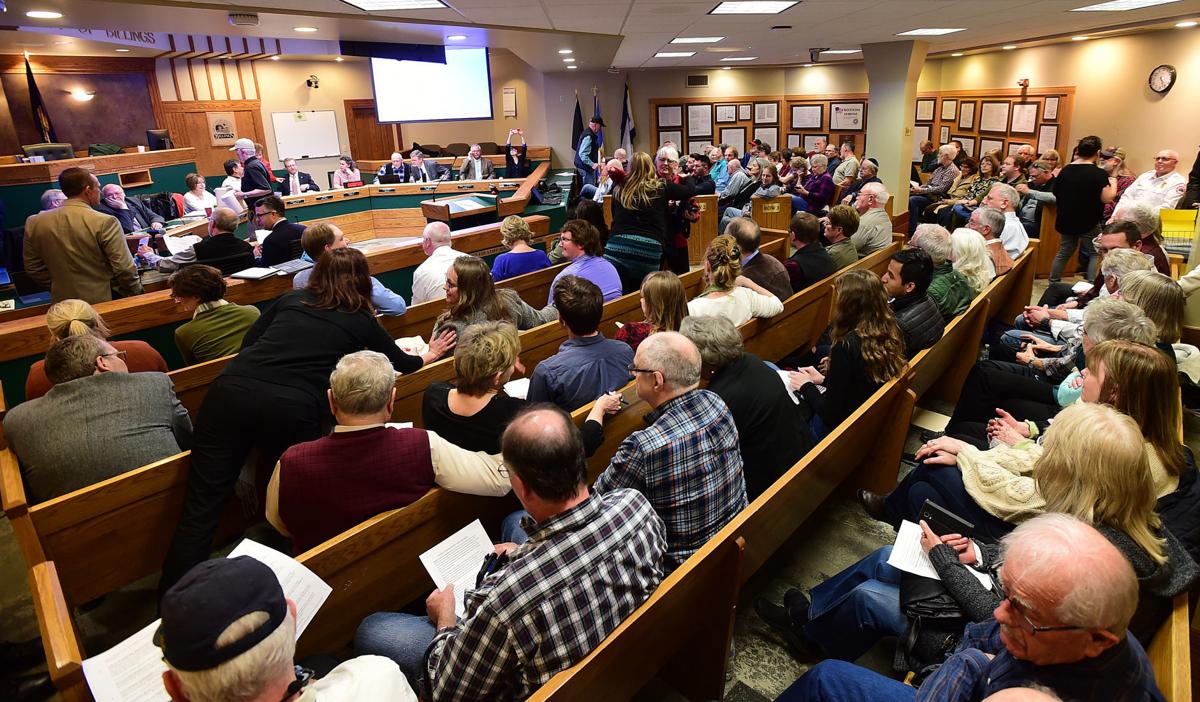 There is standing room only for Monday's Billings City Council meeting that will address a new NDO proposal. There was security searching people at the door and at least six police officers in the chamber.

In a 7-4 vote, the Billings City Council rejected placing a draft nondiscrimination ordinance on an August council agenda.

Council member Penny Ronning brought the initiative forward. She, along with Kendra Shaw, Denise Joy and Danny Choriki voted in favor of placing it on the August agenda.

"This is the beginning," Ronning said following the vote. "I'm bringing it back again. It's a conversation this community clearly wants to have."

More than 100 people filled the Billings City Council chambers Monday night, with a smaller group waiting outside, waiting for the chance to weigh in on whether city leaders should put a nondiscrimination ordinance on a future council agenda.

Before they got their chance, the council approved the annexation of property on the northwest corner of Central Avenue and Shiloh Road for the development of a Buggy Bath Car Wash. The property is the empty field that sits just north of the Zip Trip convenience store on the corner.

Council members also discussed improvements at Centennial and Castlerock Parks, the product of a months-long ongoing debate over how best to fund the maintenance and development of city parks.

From there, the council moved to its public discussion on the proposed NDO, officially titled the Welcoming Diversity Ordinance. Comment was broken into 30-minute chunks and limited to a total of two hours. Those in favor spoke during the first 30-minute block and each comment was limited to two minutes.

It was a vibrant crowd, with both sides speaking passionately and effusively on the pros and cons of a citywide NDO. Mayor Bill Cole acknowledged the heartfelt opinions on both sides and told the crowd he was proud of the respect and civility they had shown.

The proposed NDO would amend city code to specifically assert that residents have a right to housing, employment and city services regardless of their race, religion, sex, physical and mental ability, age, gender identity or expression, marital status and sexual orientation.

It also includes an exemption for religious beliefs.

Those speaking in favor of placing the NDO on a future council agenda talked about the NDO's economic advantages.

An NDO communicates to the outside world that Billings is a place that's safe and welcoming, something that's vital for tourism and attracting and keeping talent in town, she said.

Danielle Egnew, who described herself as a fourth-generation Billings resident, is a business owner in town and a lesbian.

"We aren't going anywhere," she said. "But other people are."

She said she worries about talented residents who choose to leave Billings because they don't feel welcomed here. She's also concerned about the negative perception Billings has as the only big city in the state without an NDO.

Rabbi Uri Barnea spoke to the council. He talked about being the music director of the Billings Symphony in 1993 and finding anti-Semitic literature tucked into his Sunday newspaper. A few days later, he came home from conducting the symphony to discover the front door of his home had been smashed in.

It was part of string of antisemitic violence in Billings that led to the Not In Our Town movement. He encouraged the council to lead on the issue of LGBTQ rights like the city did 25 years ago when it faced antisemitism.

Speaking against the city taking up the NDO discussion again were residents concerned about its impact on religious freedom and how it might impact members of the business community who refuse service to those living a lifestyle with which they disagree.

"We believe the NDO would be used to bully people like ourselves," said Thomas Bailey.

Bailey said he and his wife Haley have a burgeoning photography business and they fear being sued if they were to deny their services to someone if an NDO were put in place.

Local pastor Steve Schreiner apologized for the hurt experienced by those in the Billings LGBT community and then spoke to the concerns voiced by the Baileys.

"People of faith are being persecuted," he said.

Schreiner said he worries that an NDO would be "weaponized" by groups who oppose the Christian faith.

State Senator Cary Smith spoke to the council about the "unintended consequences" of NDOs, explaining that was one of the reasons the state legislature had yet to approve one.

Public comment was followed by a discussion among council members as they prepared to vote on whether to place an NDO on a future agenda.

Mayor Cole parsed his thoughts carefully, speaking about the importance of standing up against hate, bullying and violence against the LGBTQ community in Billings. His opposition to moving forward was his belief that the language of the draft ordinance was unconstitutional.

Along with that, he said, is the timing. The council will be working this summer to sell a public safety mill levy to voters and this spring the council has to work through an entirely rewritten zoning code.

"I simply do not have the bandwidth" to also work through an NDO, he said.

Supporters of a new push for a nondiscrimination ordinance in Billings rallied at the First Congregational Church on Monday night.

NDO supporters refine their pitch to the city council

Supporters pushing for the Billings City Council to pass a nondiscrimination ordinance are using numbers to make their argument.

'We're not going away': NDO supporters look to what's next

The Billings City Council has prioritized its year.

Robyn Driscoll, a former Yellowstone County Commissioner and member of the Montana House of Representatives and State Senate, was the first speaker in favor of an NDO at the Billings City Council chambers Monday night.

There is standing room only for Monday's Billings City Council meeting that will address a new NDO proposal. There was security searching people at the door and at least six police officers in the chamber.