After surveying and receiving feedback from over 450 community members, the City of Billings has moved into the design phase for a $7.4 million project to improve downtown traffic by converting several one-way streets into two-ways.

The project aims to make downtown Billings easier to navigate by keeping traffic at a controllable level while increasing exposure to businesses and promoting bike lanes and sidewalks. 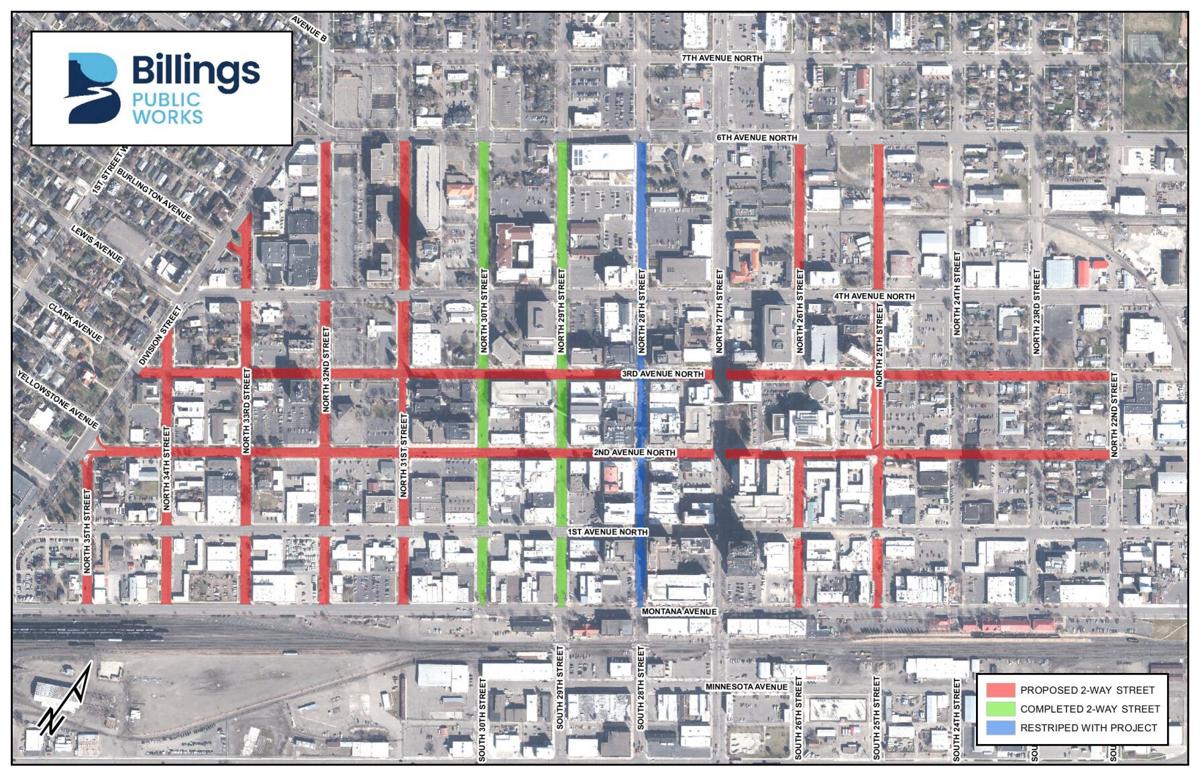 Sarah Plath, a staff engineer at the Billings Public Works, said the idea of turning streets to two-ways downtown had been around for a while.

Plath has been reading studies dating back to the late ’90s that put together the feasibility of converting streets from one to two-way and sees this project generally as a commitment to the vitality of Billings’ downtown core. Transportation plays an important role in livability downtown, she said.

According to Billings Public Works, two-way traffic in commercial corridors help facilitate the right amount of traffic; provide a safe environment for pedestrians; support a good location for small businesses; boost property values, which tend to rise faster on two-way streets and increase a sense of comfort and safety for pedestrian shoppers, diners, and downtown visitors.

According to city engineer Mac Fogelsong, construction could start in late 2023, but 2024 will see the bulk of the work.

The city will advertise and bid the construction elements of the project out to the public. After the city receives bids from contractors, the bids will be read publicly. The city will then review the bids and make a recommendation to the city council.

The city has $7.4 million allocated toward the project as part of its City Capital Improvements Plan. A portion of the spending will go toward regular road maintenance (the roads are due for a chip seal, according to Fogelsong).

The remainder will go towards the infrastructure improvements associated with the two-way streets, which will be funded through downtown TIF funds.

TIF or tax increment financing is a mechanism used by municipalities and local governments to fund public infrastructure development and other improvements in a specific geographic area.

TIF funds are generated by the difference in property taxes paid on the increased value of properties within the designated TIF district after the improvements that have been made.

The additional tax revenue is then used to pay for the bonds issued to fund the improvements and ongoing maintenance of the district. TIF is a way for municipalities to fund redevelopment and infrastructure projects without raising taxes on residents.

This project is also beginning the initial design of a road diet for Montana Avenue between North 27th Street and North 21st Street.

The road diet for Montana Avenue will consist of maintaining one-way traffic but reducing the number of travel lanes from three to two, which will promote slower travel speeds and allow for additional parking.

Montana Avenue is a state roadway, so the proposed improvements will be reviewed by the Montana Department of Transportation and constructed separately. Due to this, construction timing is unlikely to line up with the rest of the downtown project work.

As the downtown street conversion project moves into the design phase, some city council members wonder if the city could justify the millions of dollars it spends on the project.

Mike Boyett, a city councilman for Ward 5, said millions of dollars is a lot of money to spend unless there’s a burning need.

“Every penny counts,” Boyett said. “How could you justify this project? Take a survey to see if it did what you intended.”

Boyett was also concerned about the back-in angle street parking that would be implemented with the project.

Back-in parking has its advantages, according to Billings Public Works. It provides drivers a better line of sight for spotting cyclists, pedestrians and other vehicles. It also creates safer access for loading and unloading vehicles.

The city will hold a public meeting at some point during the design process, likely later this spring or summer. The project team will be engaging with downtown businesses and property owners throughout the duration of the project.

With an original goal to vote on new zones to implement in the 2023-24 school year, the board will now re-visit potential changes to be implemented in the 2024-25 school year with greater time and public input from the public taken into consideration.