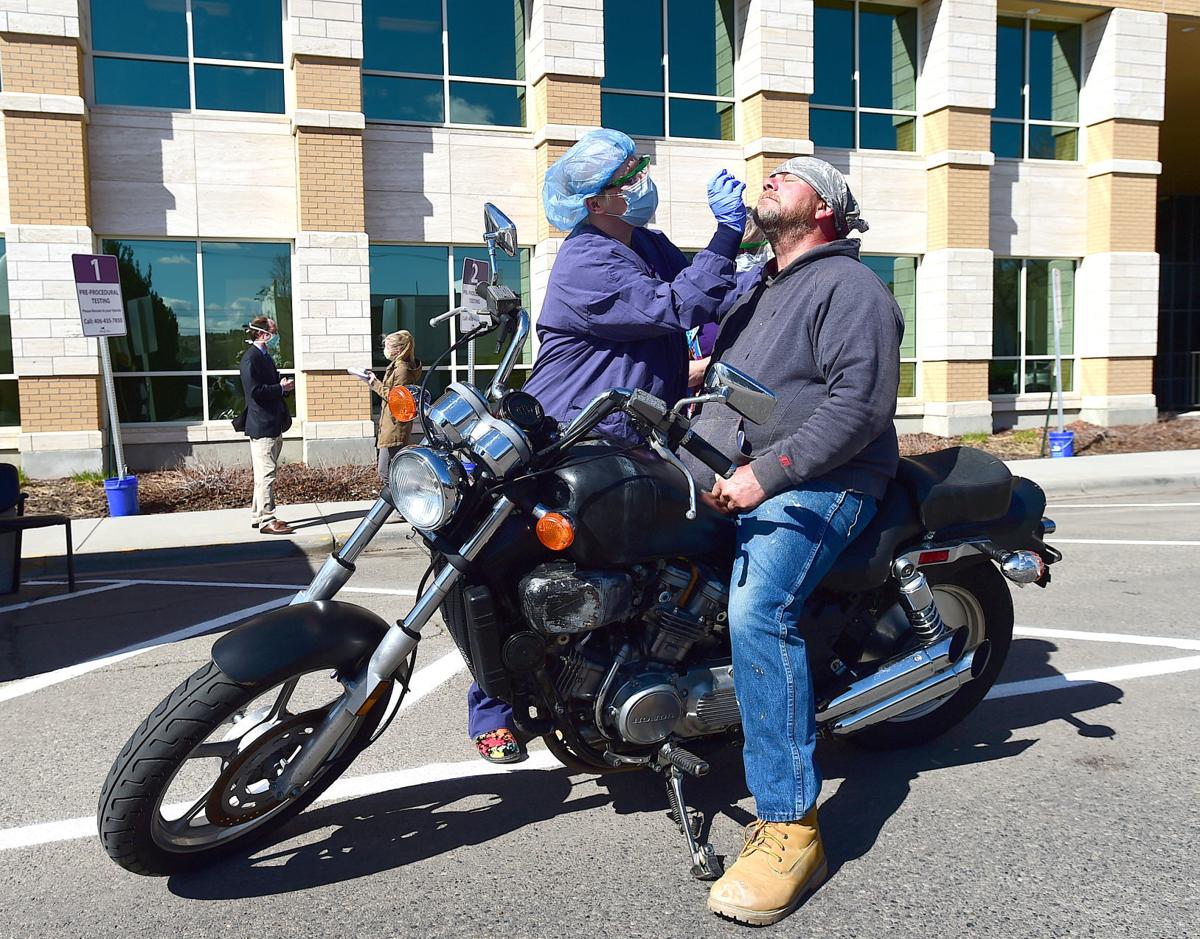 Herman Hill arrived on a motorcycle for his pre-procedural coronavirus testing at Billings Clinic on North Broadway on Tuesday. Hill has been waiting for knee surgery. 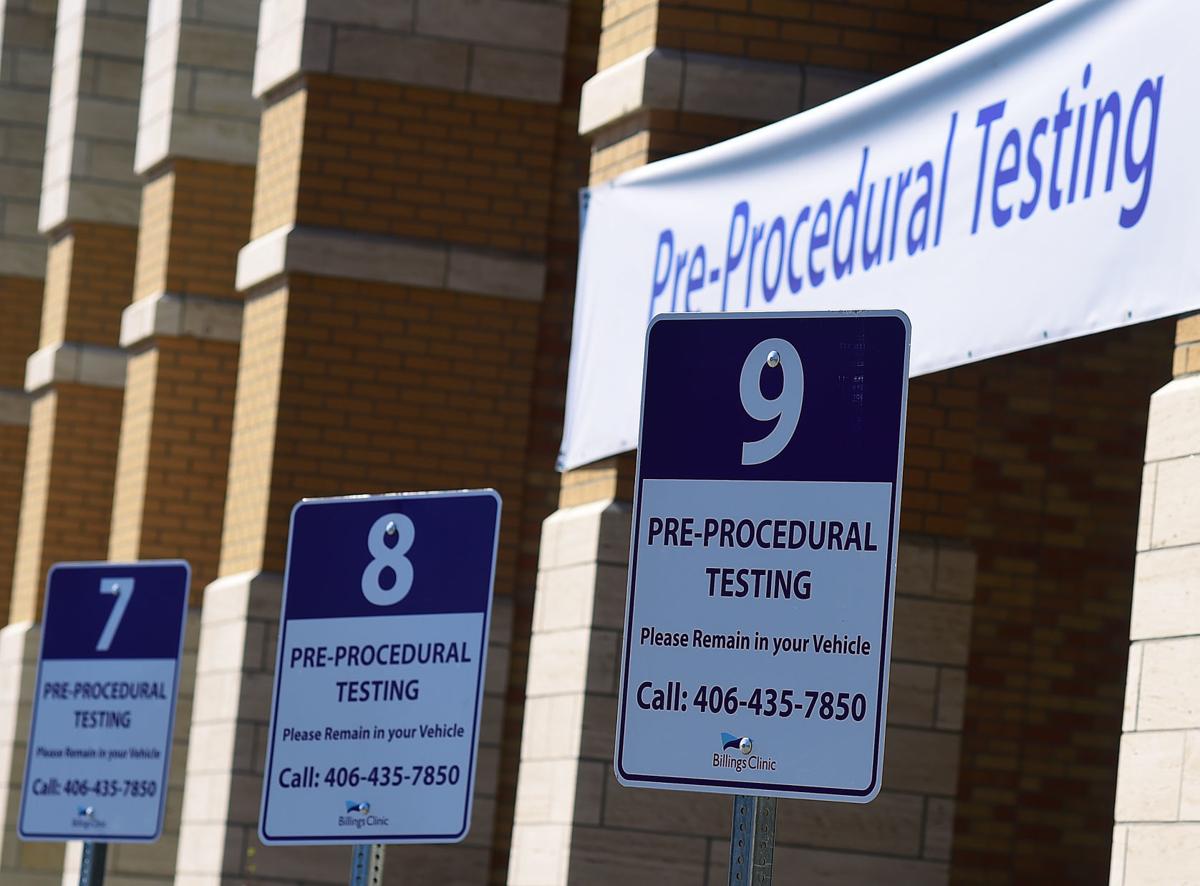 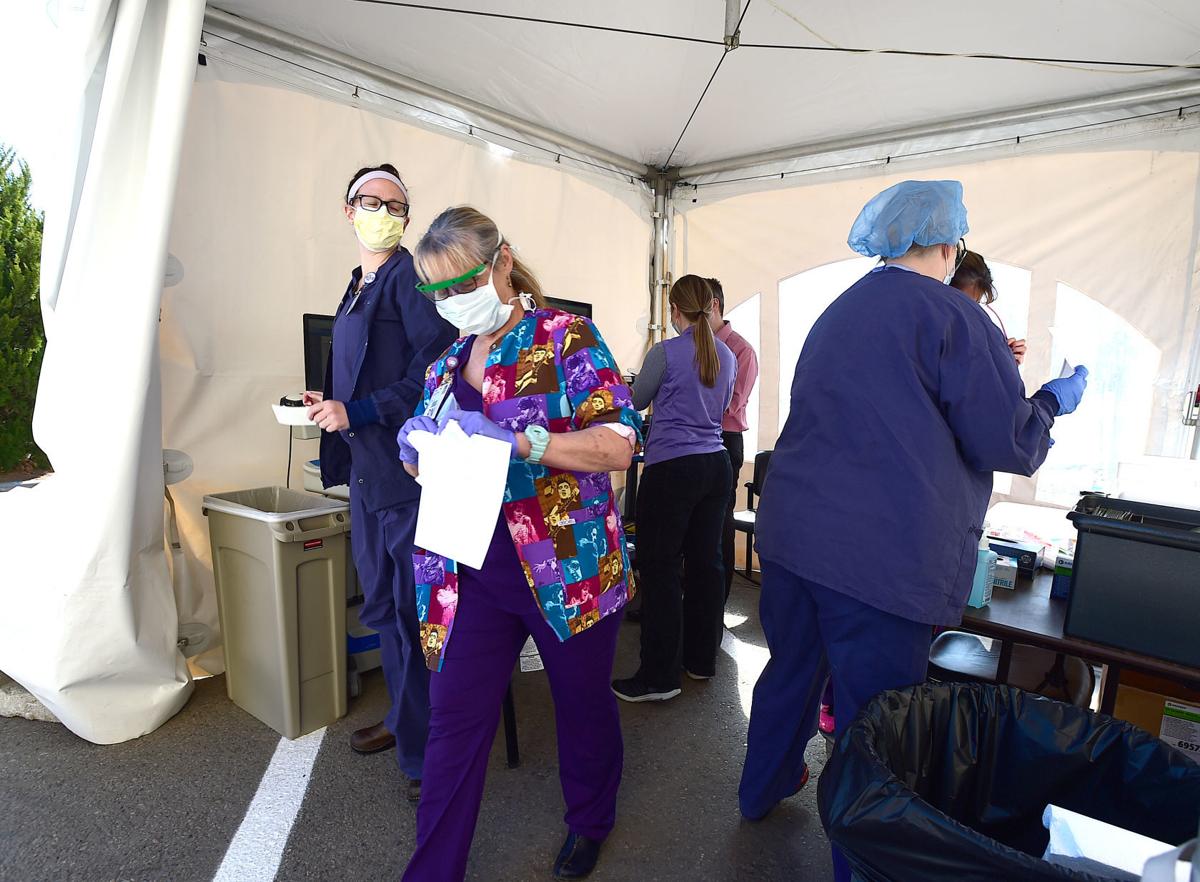 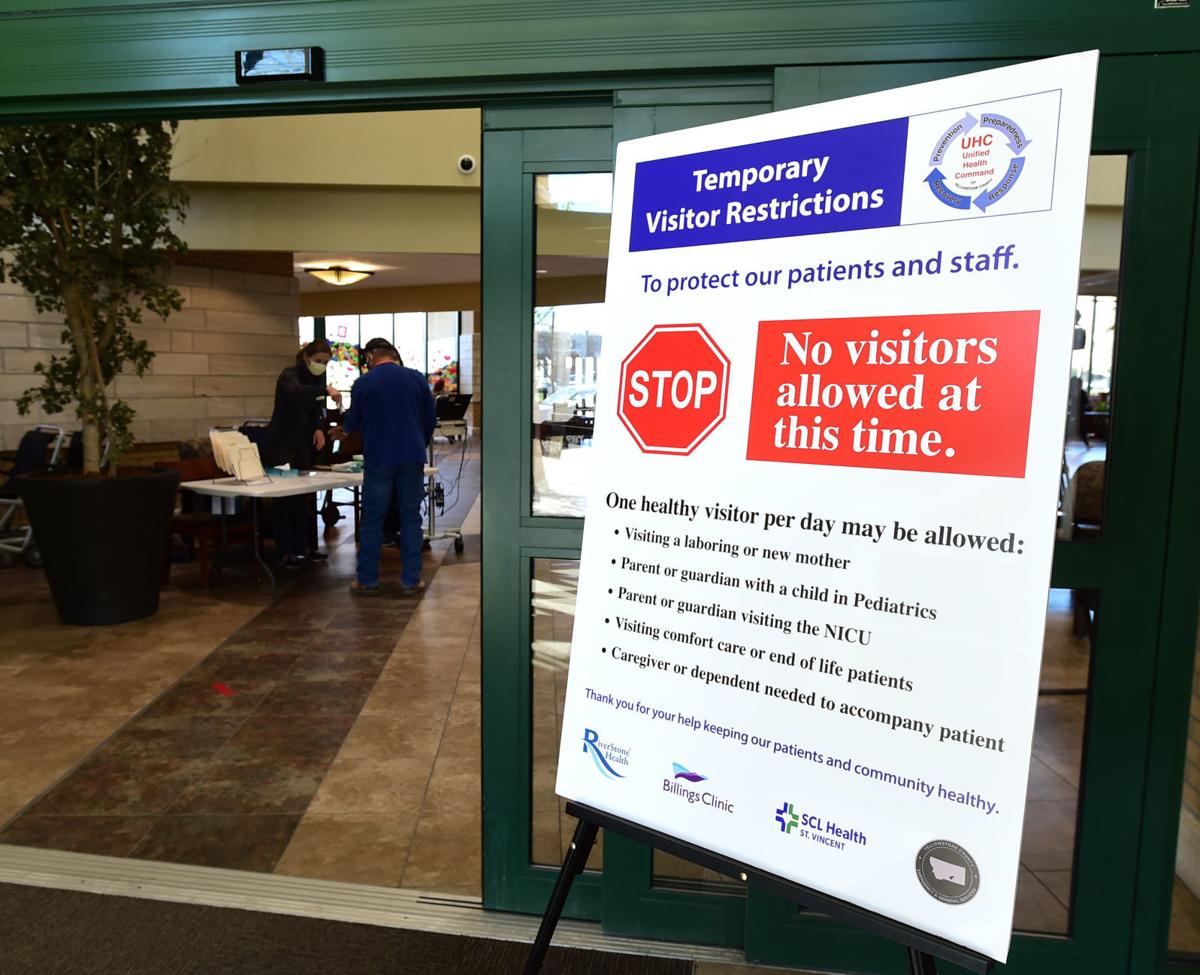 New rules for entry to Billings Clinic including temperature testing and masking are in effect. 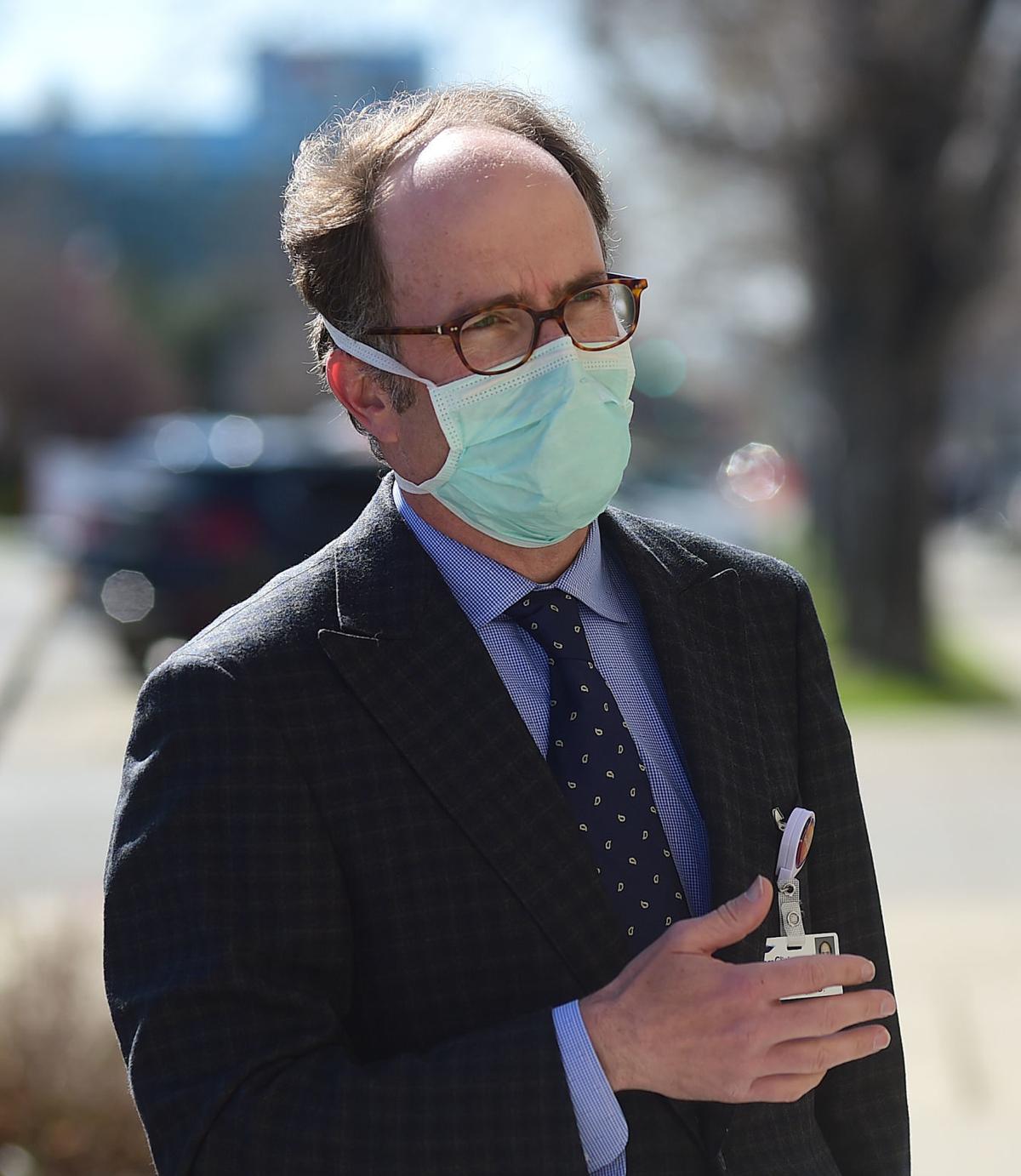 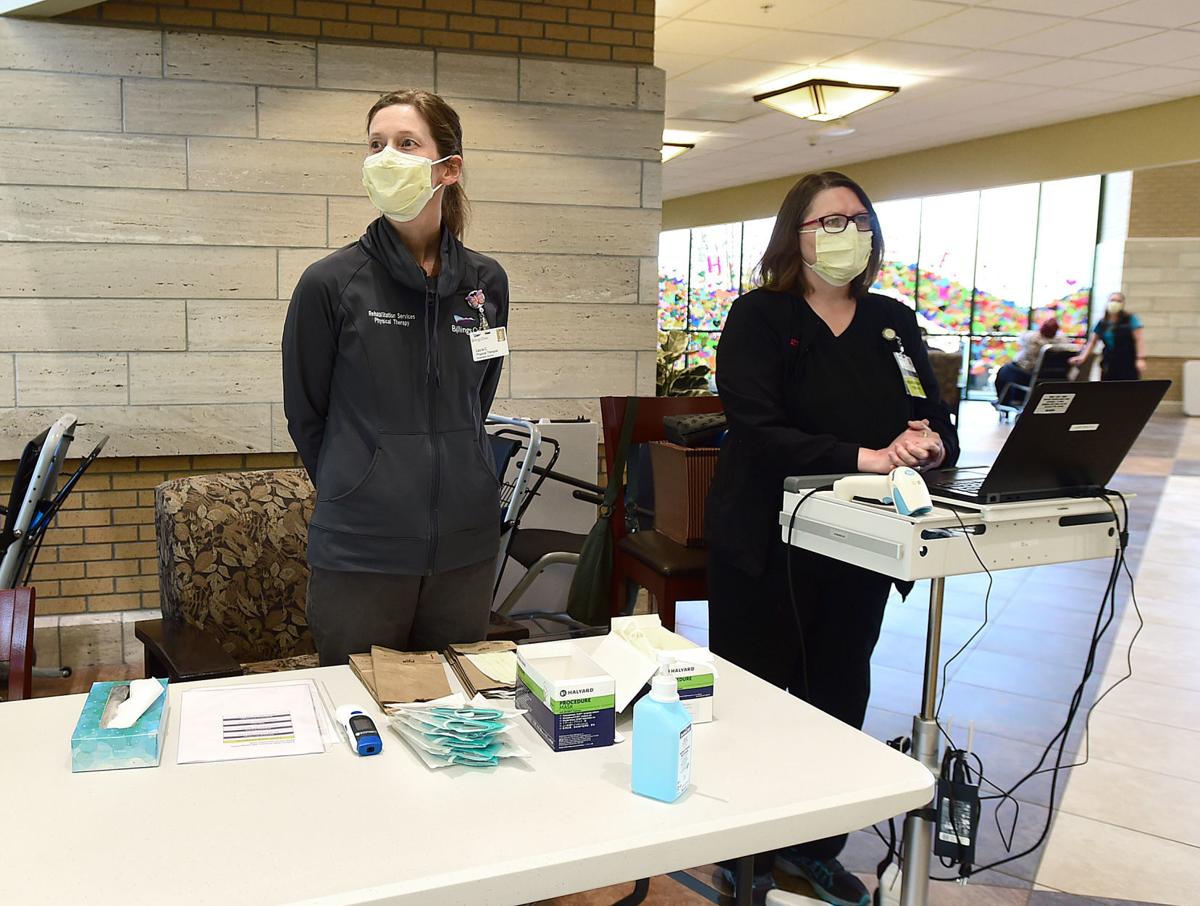 Patients and staff arriving at the Billings Clinic Commons are screened as pre-procedural testing has started at an outdoor tent on North Broadway.

As Montana’s economy begins to reopen, both Billings hospitals are resuming elective surgeries, putting in place safeguards to prevent the spread of the novel coronavirus.

St. Vincent Healthcare performed 17 surgeries on Monday, and expected to do another 19 on Tuesday, according to Chief Medical Officer Dr. Michael Bush.

Billings Clinic will begin elective surgeries on May 4 and is currently conducting the needed testing for COVID-19. Elective surgeries are any surgery planned in advance and not undertaken in an emergency.

Neither facility has conducted any elective procedures in weeks. On March 26, the Montana Hospital Association announced its members would cancel planned procedures in an effort to conserve resources and slow the spread of COVID-19.

Canceled surgeries are a big factor in the financial struggles hospitals are facing, with MHA estimating a $100 million loss, at a minimum, for its 88 members during the first three weeks of the pandemic.

Patients, too, are feeling the impacts, whether through prolonged physical discomfort or in other ways.

Herman Hill, 56, said he hasn’t been waiting long, maybe a month, to get knee surgery at Billings Clinic. While he’s got some pain when he walks, he said the bigger issue for him is his finances. As a roofer, he’s been unable to work until his knee is fixed.

Billings Clinic has set up a testing site outside its Same Day Care center specifically for use by patients scheduled for surgery. Before booking the surgery, they’re told they must be able to isolate immediately from being tested until they return for surgery. They’ll also be screened upon entry for fever and other symptoms, just like everyone entering the hospital.

St. Vincent patients awaiting surgery will be tested at the hospital’s main drive-up testing center, but can only get their test sample collected during morning hours, while symptomatic patients may only do so in the afternoon.

A doctor’s order is still required for all testing.

If anyone pending surgery tests positive, they’ll be handled like any other positive case. The surgery would only go forward if there was an urgent medical need, said Billings Clinic Director of Same Day Care, Sarah Brown.

With roughly a month of surgeries postponed, there is a backlog. Both hospitals are prioritizing who goes first based on medical necessity.

Dr. John Pender, chief of surgery at Billings Clinic, said that could mean putting those patients in high risk categories for COVID-19 farther down on the list.

Billings Clinic is focusing this week on patients who live in or near Yellowstone County. By next week, the hospital hopes to have testing set up in other parts of the state to serve all of its patients.

While the state lab processes samples within 24 hours, it’s only handling testing for symptomatic people. Pre-surgery tests must be sent to private labs.

Billings Clinic is sending its tests for anyone pending surgery to Mayo Clinic in Minnesota, which has an estimated turnaround time of four to six business days.

St. Vincent Healthcare is sending its tests to National Jewish Health in Denver, which delivers results in two to three days.

Bush, the chief medical officer at St. Vincent, said that as the state reopens restaurants and retail businesses, allows churches to reconvene and relaxes gathering requirements, he urges everyone to remain cautious.

As of Tuesday, Montana ranked lowest in per capita COVID-19 cases, according to the Centers for Disease Control and Prevention. Bush credited that to the state’s relatively early stay-at-home order, and said if people do not remain careful, progress could be lost.

“Because this is the next year and a half to two years, and that’s a tough message,” Bush said.

In rural U.S., fears of virus seem far away as stores reopen

Parts of the U.S. are starting to lift closures, and some of the quickest to do so have been rural states like Montana, Vermont and Alaska. The effects of the pandemic in small towns can seem a world away from what cities are grappling with.

As Billings slowly began its limited reopening on Monday after five weeks of COVID-19-based closures, City Council members wanted to know what that might mean for youth sports leagues.

We can all help stop the spread of COVID-19

Public Health is often called the "invisible profession" because people do not hear much about it until disaster strikes. Public health sudden…

Another dies of COVID-19 in Yellowstone County, state adds no new cases

The North Dakota Department of Health on Wednesday reported the number of people in the state testing positive for COVID-19 has surpassed 1,000.

Montana will establish a target of 60,000 tests for COVID-19 each month, Gov. Steve Bullock said Wednesday, adding that it's a goal the state will need to work up to by increasing testing supplies.

Herman Hill arrived on a motorcycle for his pre-procedural coronavirus testing at Billings Clinic on North Broadway on Tuesday. Hill has been waiting for knee surgery.

New rules for entry to Billings Clinic including temperature testing and masking are in effect.

Patients and staff arriving at the Billings Clinic Commons are screened as pre-procedural testing has started at an outdoor tent on North Broadway.