City officials earlier this year tallied up the contacts between residents and public safety service providers in 2020 and found that 93 people had more interactions with those providers than anyone else in the city.

Many of the 93 people come from Billings' transient and unhoused populations, and each of them had at least 15 contacts with Billings Police and other public safety officials in 2020. One individual alone had 393 different interactions with providers.

It's a problem long puzzled over by the city's staff, elected officials, emergency service providers and the downtown business community. All admit there's no easy answer and most agree that identifying those "super utilizers" can help organizations craft a solution.

"We've got to get really creative," said Craig Barthel, who manages the downtown low-barrier shelter called Off The Streets.

The city's study found the 93 people had had a combined 5,601 total contacts with law enforcement. The study defined contact as either a citation or a warning from law enforcement, and interaction with municipal court.

"The goal of the Community Impact Study is to show the need for a program for this small subset of the population that has frequent interactions with emergency services and medical facilities at a rate significantly higher than the general population," the study states.

Missing from the study were the number of times the Billings Fire Department and American Medical Response, the city's contracted ambulance service, had responded and who they had helped. Both organizations were unable to collect the data before the study was published.

However, with just the data the city was able to collect from its other services, it then calculated the cost of responding to the 93 individuals over the course of the year.

"The Community Impact Study identified a total of 93 chronic high utilizers in the target population, resulting in $10,327,665 in public services each year," the study stated.

That's a lot of money, and Chris Kukulski, Billings' city administrator, wonders what $10.3 million could do applied in a more strategic way.

"This illustrates the need to start our mobile response teams ASAP," he said. "We are also discussing the merits (and) impacts of a sobering center. How much of the $10 million would be reduced by these two resources."

The mobile response teams was a strategy outlined for the fire department by the Center For Public Safety Management. Instead of sending out a full fire truck and crew on certain calls, the department would use a mobile response team crewed by two emergency medical technicians. The teams will operate seven days a week during the peaks hours for service calls and respond in light trucks or SUVs.

The hope is that a more nimble response to service calls involving downtown's at-risk population will reduce costs for the city and better serve those who need the help.

The city hasn't published who the 93 individuals are so the organizations downtown that serve the city's homeless and transient populations don't know how many of the 93 are using their services.

"Their impact on me isn't any different from others we serve," he said.

Off The Streets is a last-resort shelter set up last fall by the Continuum of Care, a group of over 20 local organizations that assist, manage or treat members of Billings' vulnerable and transient populations. The shelter is housed in the former Western Inn downtown.

Those who use Off The Streets have to check in every evening and leave every morning. When they arrive they're screened by the Community Crisis Center and can be diverted to other shelters if they qualify.

And so those whom Barthel sees repeatedly are much the same as those who show up once or twice — they just want a safe place to sleep for the night and he's usually got the room.

Mostly the population served by Off The Streets fits somewhere between the group that needs the services provided by the Crisis Center and those who use the Montana Rescue Mission, Barthel said.

The Crisis Center, a 24-hour crisis shelter, has limited space and is designed to help those with immediate substance abuse or mental health needs.

The Montana Rescue Mission, which operates the Men's Shelter and Women and Family Shelter, is a private religious organization, and has an intoxication policy that prevents those who might pose a serious threat to themselves, to staff or to others using the mission from staying there.

The Rescue Mission has extended programs and resources, and is a great resource for those ready to make the transition from homelessness into employment and long-term housing, Barthel said.

His hope is that those who use his shelter progress enough to eventually transition to MRM, something he's seen happen.

Like Barthel, MarCee Neary, executive director of the Crisis Center, has not seen the names of the 93 individuals identified by the city. So she doesn't know how many of them her team has worked with at the Crisis Center.

But Neary pointed out that the Crisis Center prizes those who come back.

"I look at repeat users of the Crisis Center as a good thing," she said.

Every time a person checks into the Crisis Center they go through a formal intake process that connects them to a case worker and evaluates their needs. That starts a process that directs the individual into addiction recovery programs or mental health or other social services, depending on needs, she said.

"We are building relationships with people," she said. "They know we're here — they come when they need us."

Typically it can take between three and five years for someone who starts showing up at the Crisis Center to enter into full recovery or fully manage their mental health issues. For that reason, Neary often calls for patience with individuals who end up using services on multiple occasions.

"If we think they're going to get better overnight, we're sadly mistaken," she said.

The Crisis Center is funded in part by the three hospitals in town, St. Vincent Healthcare, Billings Clinic and RiverStone Health.

Kukulski said the city will continue to look for the best ways to address the issues raised in impact study. Some of it will be tied to the $7.1 million public safety mill levy that the city is seeking from voters in November.

A shortage of mental health providers in rural areas fuels the high suicide rates with 30 out of Montana’s 56 counties reporting zero psychologists to serve their communities.

Town and Country originated in Livingston in 1966 and has since expanded to Bozeman, Belgrade, Lewistown, Dillon and now Billings.

Billings public transit users will see some upgraded buses rolling around town after the city bought new vehicles over the summer.

The Billings Police Department has found a 54-year-old man who had been missing since Tuesday.

In states like Montana, the prescription for healthier patients may be lawyers

COMMERCE CITY, Colo. — In her 19 years of living with cerebral palsy, scoliosis and other ailments, Cynthia Enriquez De Santiago has endured a…

Some of Bozeman's homeless find safe summer shelter at pond

“There’s a stigma about homeless people” — that they’re dangerous, all in active addiction or living off the government — “but not the people I know.”

The Billings Police Department wants to retain more officers, recruit more women and Native Americans, and make better use of the data it coll…

A group of Bozeman residents who struggle with housing stability will soon have a warm, safe place of their own to stay.

Off The Streets, the low-barrier shelter that opened last fall in downtown Billings, will continue operating after showing significant success and seeing a continued strong demand for services.

Off the Streets, the low-barrier shelter set up last fall in downtown Billings, has received $100,000 from the SCL Health Montana Mission Fund…

Billings, the largest city in Montana, owns no ambulance and it's become a cause for consternation within the Billings Fire Department.

Local organizations Substance Abuse Connect and the Yellowstone County Continuum of Care presented their case for city funding to varying degrees of resistance from the Billings City Council Monday night. 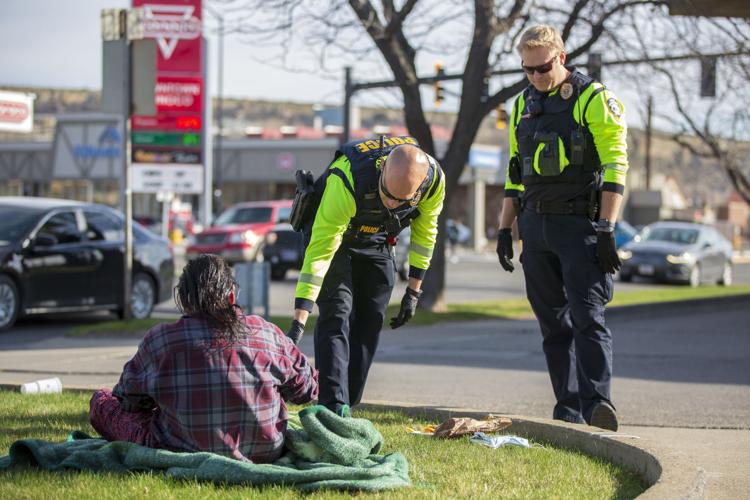 Officers Brad Mansur and Phil Tanis of the Billings Police Department speak to a woman who was asleep on a lawn Thursday, April 8, in downtown Billings. The two officers helped the person pick up her belongings as they made her to move along, but not before they offered a ride to the hospital for her injured knee. 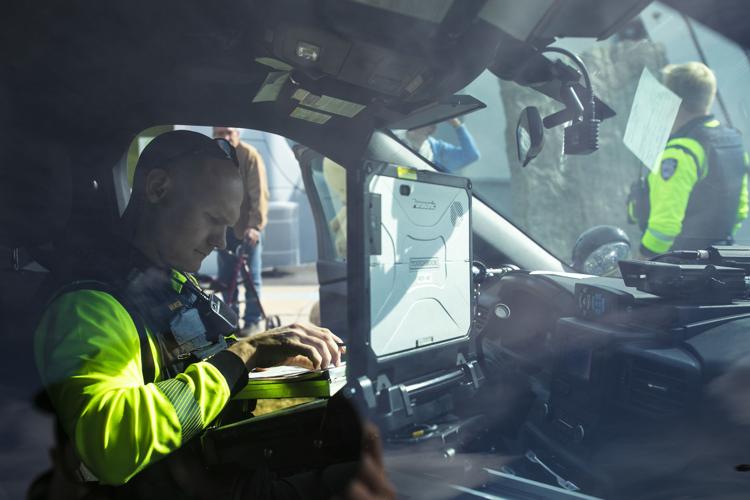 Officer Brad Mansur writes up tickets for two men who were drinking in public and trespassing on private property Thursday, April 8, 2021, in downtown Billings. After giving the two people their tickets, Mansur and fellow downtown resource officer Phil Tanis drove off, but returned about a minute late to find that one of the men had already opened a new beer, which warranted another ticket. 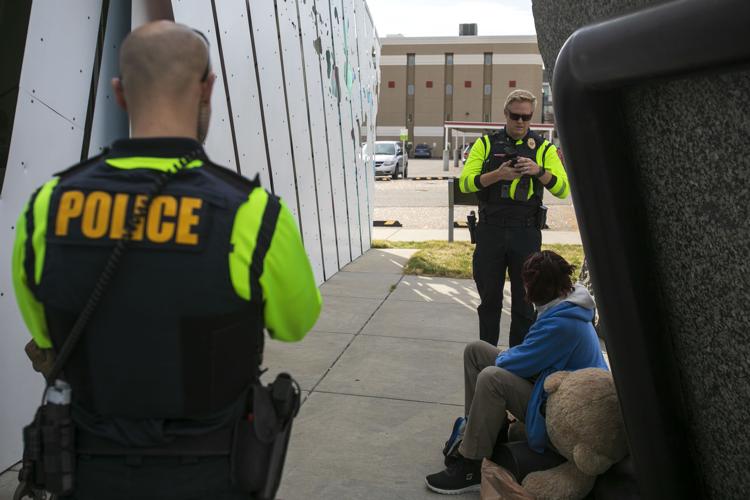 Officers Brad Mansur, left, and Phil Tanis of the Billings Police Department speak to two men who were drinking in public and trespassing Thursday, April 8, 2021, in downtown Billings. 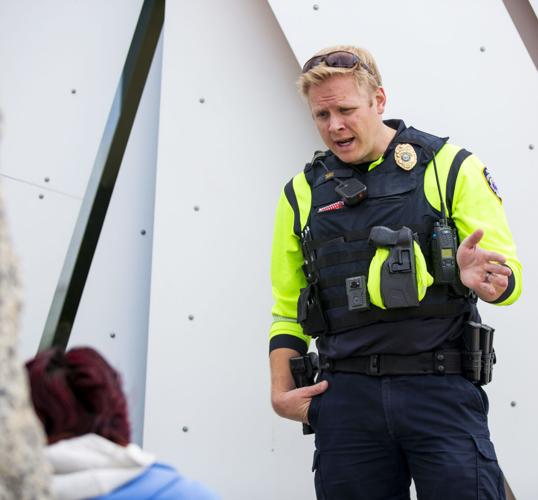 Officer Phil Tanis speaks with a person who was caught drinking in public and trespassing Thursday, April 8, 2021, in downtown Billings. 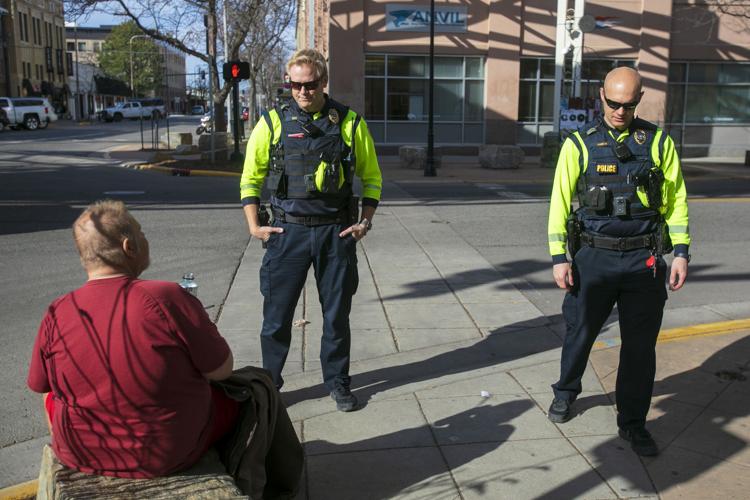 Officers Phil Tanis and Brad Mansur of the Billings Police Department speak with a man while walking around Thursday, April 8, 2021, in downtown Billings. The two officers asked the man if he was in need of any services, and after he declined, they moved on with their patrol. 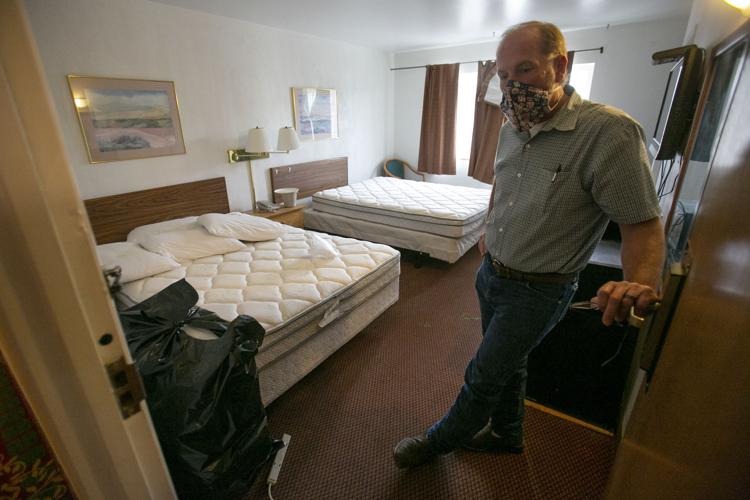 Craig Barthel, site director for a new low-barrier shelter, shows off an unfinished room at the former site of the Western Inn Motel Friday in Billings.