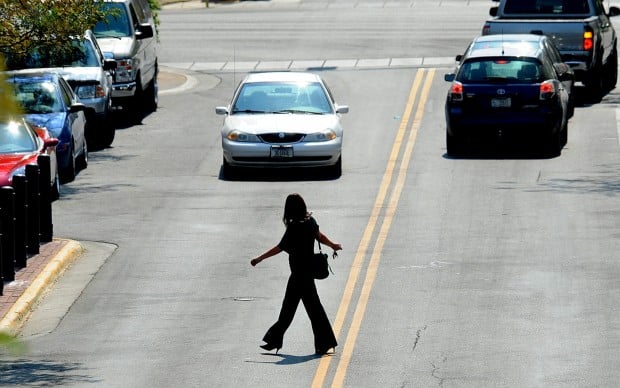 A woman crosses in the middle of the block on North Broadway on Aug. 22. 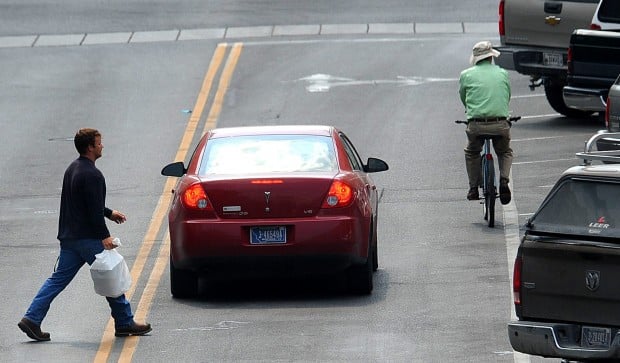 A man crosses in the middle of the block on North Broadway on Aug. 22.

With eight traffic accidents involving pedestrians, bicycles and vehicles in one month, the string of incidents was bound to get the attention of community members and Billing police alike.

“There was a rapid succession, but it was kind of an anomaly,” Billings Police Chief Rich St. John said. “It’s been a bad combination of distracted drivers and people in the roadway where drivers aren’t expecting them and where they aren’t supposed to be.”

This year, there have been 17 pedestrian-vehicle and five bicycle-vehicle accidents reported, one of which was fatal. In 2011, two pedestrians were killed in Billings while 30 pedestrians and 33 bicyclists were injured in vehicle-related accidents.

Although the numbers are not an increase from last year, St. John said, the number of traffic "contacts" — including warnings and citations — was up 23 percent from Jan. 1 to June 30 compared with the same period in 2011, with a focus most recently on enforcement of pedestrian-crossing laws.

“It’s a cause-and-effect situation,” St. John said. “The string of accidents really struck the public and our department and it’s important that we enhance the safety of all traffic and get people to comply with the laws.”

In July, the department conducted a vehicle-versus-pedestrian enforcement detail in the downtown area in an attempt to improve pedestrian safety and reduce the number of vehicle-pedestrian traffic accidents.

A three-officer unit was assigned to enforce pedestrian laws and the use of crosswalks and crossing signals. On one day, they issued 14 warnings for pedestrian violations.

St. John said jaywalking hasn’t ever been heavily enforced in Billings until recently. At any given time, there are six to eight officers that concentrate on the downtown area, with four officers assigned exclusively to traffic patrol, St. John said.

The department is using its new analytics software, Omega CrimeView, to concentrate enforcement efforts where they appear to be most needed by identifying incident patterns around the city.

With the start of a new school year, enforcement has focused on school zones.

“We will focus on areas with the highest amount of foot traffic and higher intensity of incidents,” St. John said.

The Police Department continues to look into a June 19 morning crash that killed a 73-year-old James Feller, of Billings, as he walked along a sidewalk on Montana Avenue near the intersection with Division Street.

Just a week later, on the morning of June 27, a woman crossing a street against a red light in downtown Billings was hit by a small sport utility vehicle and was taken to the hospital. That same day, two bicyclists were hit by vehicles within one hour of each other at different ends of town.

On July 19, a man and woman were taken by ambulance to a hospital after they were hit by a pickup truck in a downtown intersection.

“There needs to be more education and awareness with pedestrians, bicyclists and drivers,” Billings Police Lt. Kevin Iffland said. “Our streets are used by all types of transportation and everyone needs to be aware of their surroundings and others around them.”

According to Montana law, vehicles must yield to pedestrians crossing or attempting to cross at a crosswalk. When pedestrians are crossing at a placement other than a designated crosswalk, they are required to yield to all vehicle traffic.

Billings police crime analyst Becky Shay said there are not specific intersections or crosswalks that are identified as particularly problematic areas with redundant incidences.

“A big part of my analysis is that often times, a vehicle will be turning right and fail to look both ways,” Shay said. “I think it is in a driver’s nature to look for vehicles and we fail to look for pedestrians or bikes, regardless of right-of-way. If people aren’t crossing in a designated crosswalk, then that adds to the problem.”

The biggest percentage increase of traffic contacts made by the department by far was in the number of stops for illegal cellphone use. For that offense, the number of contacts rocketed from 230 in the first half of 2011 to 615 this year. Officers issued 304 warnings and 311 citations for cellphone violations.

“Even with the uptick of enforcement, there are still an awful lot of cellphone violations,” St. John said. “Cell phones are distractions to all traffic — foot traffic, bike traffic and vehicle traffic.”

The City Council banned the use of cellphones by drivers in the summer of 2010, and the ban took effect that fall.

Shay said another component is that some bicyclists do not realize they are considered vehicle traffic and fail to comply by the same laws.

Bicycles are not allowed to ride on the sidewalk in the business district or travel against traffic, which have both been causes of several vehicle related accidents.

“It’s like you always need to be on the lookout for distracted people on cellphones and drivers and bikers who make their own rules,” Billings resident Cari Seilstad said. “Everyone just seems to feel entitled to the road and the right-of-way without the consideration of others.”

St. John said the overall goal with traffic enforcement is to increase the safety and awareness of everyone that uses the roads.

“People need to be more respectful by following the rules so everyone can get going to where they are headed safely,” St. John said.

View a map of vehicle, pedestrian accidents in Billings in 2011 (red placemarks) and 2012 (blue placemarks).

A woman crosses in the middle of the block on North Broadway on Aug. 22.

A man crosses in the middle of the block on North Broadway on Aug. 22.