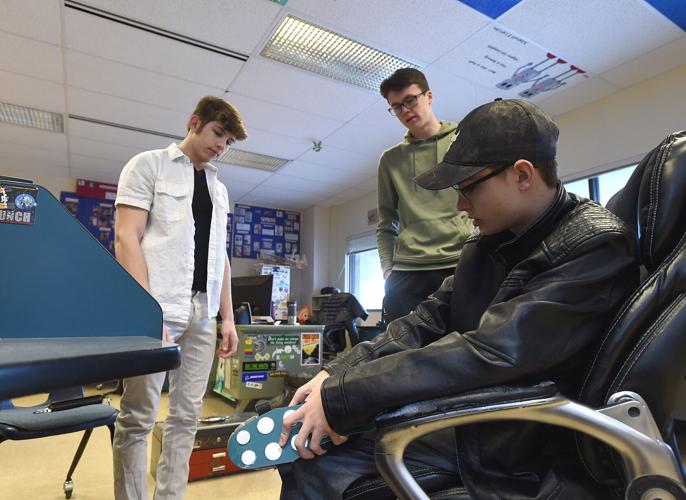 Engineering students in Eric Anderson's class at the Billings Career Center are participating in the NASA HUNCH Program. From left, Nick Morledge-Hampton, Joshua Goudy and Gabriel Nelson work on magnetic shoes for astronauts. 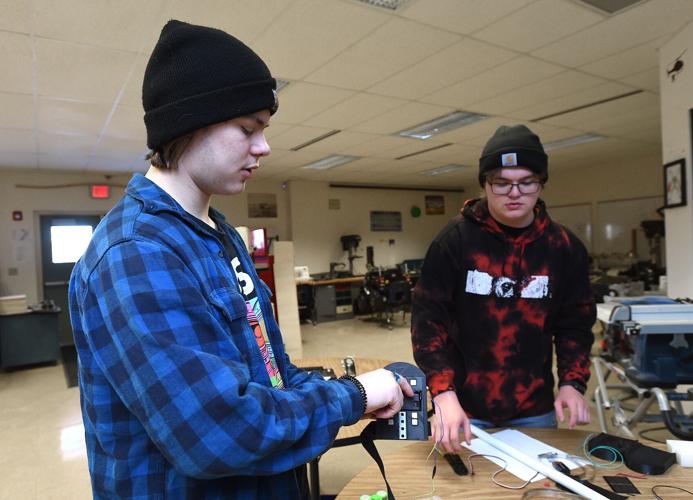 Houston, we have a solution.

Four teams of students have engineered projects at the Billings Career Center that were chosen by NASA to potentially use on the moon or in the international Space Station. Students will travel to Houston in April.

The class competed with upwards of 250 teams and 100 schools that worked on the same assignments, in the category of design and prototyping. Teams in Eric Anderson’s aerospace engineering class chose from 10 assignments, via the High School Students United with NASA to Create Hardware program. Two teams were also semi-finalists.

“I was super happy and I immediately called my mom and told her,” said Barbara McGregor, a senior. Her group engineered lunar shoes.

McGregor’s team began half-joking as they built their prototype about “going to Houston,” McGregor said. “As we got closer we realized we were doing really well and that we might actually have a chance.”

Their lunar shoes are lightweight, compactable, and comprised of materials necessary for use in space. They also designed a mock-up lunar floor as a habitat.

Teams will travel on April 12 alongside students from 44 states to present their projects to NASA engineers and some astronauts — to merge the best ideas for final designs.

Student Karson Combs was on vacation in Mexico with his family when HUNCH posted the finalists online. He waited for the poor internet connection to process during a dinner when the news finally arrived.

“It was a pretty tense 10 minutes,” Combs said. His group built a bulk transfer device.

Zach Conrad, a senior, engineered a crystal growth Nano lab with his peers.

“I was really proud of our product we made, but I didn’t know how much competition we were going against, so I didn’t know what to expect,” he said. Conrad wants to become an aerospace engineer, and he called the opportunity a dream come true.

The class dedicates two months to the projects, as they have done for five years, Anderson said. Normally they send about two teams to Houston.

Laurel high school was the pilot school for the long-distance program in the U.S. The program started in 2003, and Laurel joined in 2005.

When NASA called to ask if students at Laurel wanted to work for them, Gold would not hang up until the school was signed up, she said. She was too excited to think about details like how it would fit into curriculum at the time.

She organized an annual, week-long, aviation and technology week in Laurel, which eventually caught the attention of HUNCH founders.

For several years, the program solely operated at Laurel high.

In Billings, Central Catholic High School even participated for a time, as well as Rocky Mountain college when they picked up an on-going project from BCCHS.

That group of students in Houston met Buzz Aldrin at a launch in Cape Canaveral, Florida, in 2016. The unmanned rocket exploded, prompting the group to rebuild their project from scratch after a year and a half of work, said Andy Wildenberg, a former professor at RMC.

The group produced oxygen for astronauts in space, using algae. NASA first tested the design on zero-gravity airplanes, and later asked the group to make it space-worthy.

“Seeing light in [the students’] eyes at the launch, and Buzz Aldrin walking in and starting to talk to people — That was an amazing moment,” Wildenberg said. He added that it was a “great lesson in how rebuilding something is so much simpler than building it the first time.”

One of the founders of the program, Stacy Hale, said the program was partly created alongside efforts to centralize Johnson space center as a hub for training so that astronauts would not have to travel as much between sites.

As part of the changes at the time, Marshall Space flight center in Alabama was asking for more funds, Hale said. Rather than expand their budget, he instead pitched HUNCH to save money and also provide opportunities for students.

HUNCH also gained credibility and responsibility over the years; once working on “below the line” projects in terms of priority to now working on “numerous projects above the line,” Hale said.

Ayla Grandpre was a student at Laurel who took advantage of the program to explore her interests. She is now a systems engineer of space crafts for Maxar Technologies, which contracts with NASA, among other organizations.

Not only was she a student of Gold’s, but when she graduated to RMC, she continued the work with Wildenberg.

“I credit HUNCH with being one of the things that has taken me to where I am today, because when I was younger I absolutely loved space,” Grandpre said.

She added that “being a small town girl in Montana, HUNCH really opened up the door that I can make this a reality in my career and my life.”

Donations to help the career center students travel can be sent to andersone@billingsschools.org or send checks directly to the Billings Career Center.

Editor's note: This story updated the picture for Bubba Bergen. The previous photo was of Liam Romei.

The mother of a West High School junior wants her daughter, who has Down syndrome, to complete her senior year, while the district is citing policy that says the soon-to-be 19-year-old is too old.

Hundreds of community members gathered to dig into foreign culture and food at the international food fair held at MSUB this week.

This year’s race for the Billings School District 2 board is something this community hasn’t seen in a long time.

Group of Skyview students walk out in support of LGBTQ rights

An anonymous donor gifted ZooMontana $333,000, which is among the largest one-time gifts in the zoo’s history.

The Billings School District 2 board has called another special meeting for Tuesday where it may change a policy that has drawn community outcry.

Hundreds of students walked out of class Tuesday morning at West high school in support of Emily Pennington, a junior there with Down syndrome who will not be able to attend her senior year and graduate with her classmates.

South Side kindergartners found a gun at school, a parent questions school's response

It’s been more than two weeks since a pair of armed casino robbers tossed at least one gun while fleeing from police.

Inside Dubai center where sick turtles recover before returning to sea

Engineering students in Eric Anderson's class at the Billings Career Center are participating in the NASA HUNCH Program. From left, Nick Morledge-Hampton, Joshua Goudy and Gabriel Nelson work on magnetic shoes for astronauts. 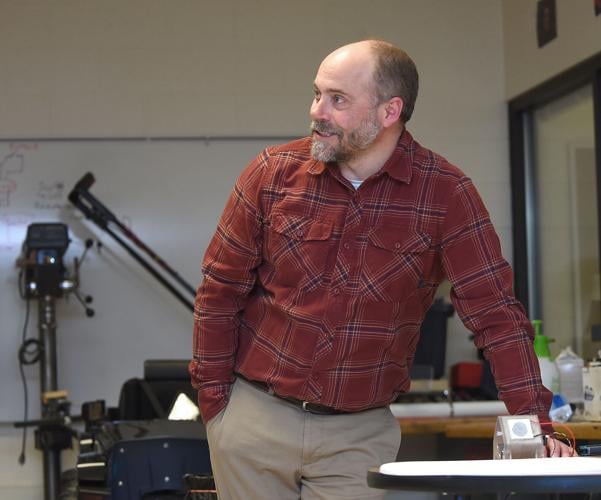 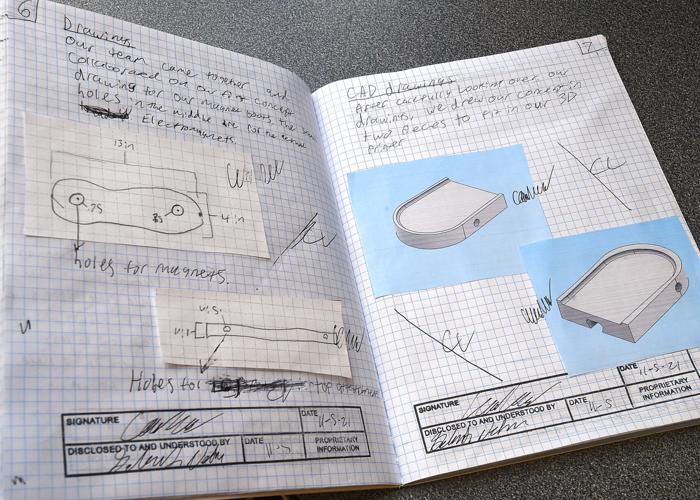 An engineering journal shows the design of a magnetic boot as students in Eric Anderson's class participate in the NASA HUNCH Program. 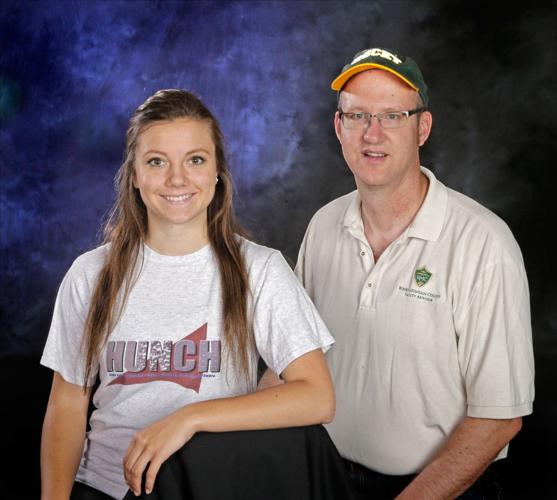