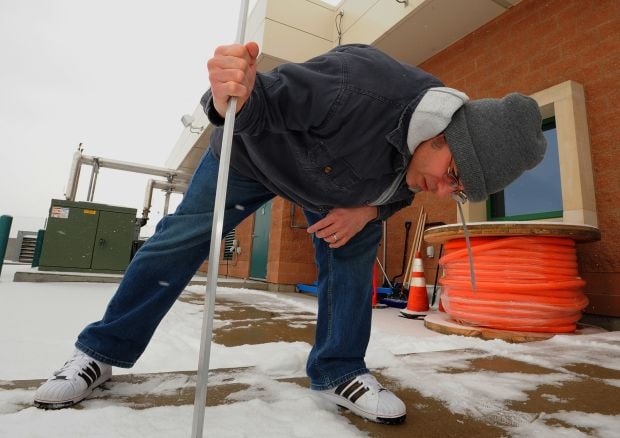 FAA weather contractor Ramy Ramos measures snow at Billings Logan International Airport on Monday. By 11:30 a.m., Billings reached 98.9 inches of snowfall for the season, passing the mark for the snowiest winter on record. 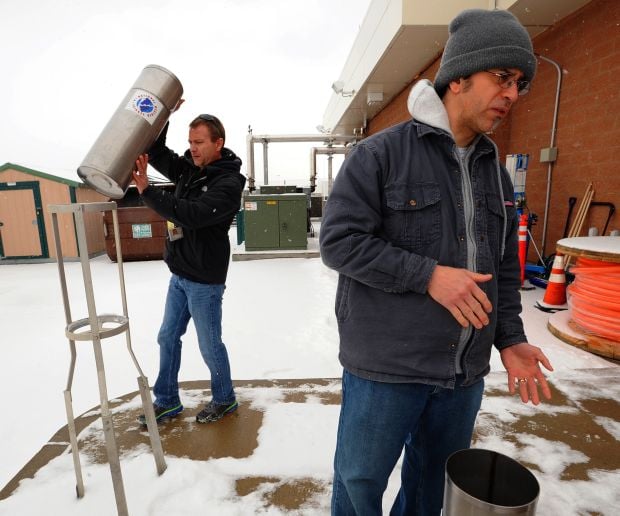 FAA weather contractors Ramy Ramos, right, and Derek Ortgies measure snow at the airport on Monday. By the end of the day, Billings reached 99.1 inches of snow so far this winter.

FAA weather contractor Ramy Ramos measures snow at Billings Logan International Airport on Monday. By 11:30 a.m., Billings reached 98.9 inches of snowfall for the season, passing the mark for the snowiest winter on record.

FAA weather contractors Ramy Ramos, right, and Derek Ortgies measure snow at the airport on Monday. By the end of the day, Billings reached 99.1 inches of snow so far this winter.

Billings has surpassed the record for snowiest winter since record keeping began in 1934.

The question now becomes: How much snow will fall before winter is over?

As snow totals inched upward, keeping track has been exciting for the snow enthusiasts at the NWS in Billings, said meteorologist Joe Lester. "We're kind of calling it, 'The march to 100.' "

And the season is not over yet.

Billings has been known to get snow in April, he said. "We've realistically got six weeks yet."

The winter has taken its toll on drivers and police officers, too.

"We're more than ready for spring," said Capt. Keith Edgell, of the Billings District of the Montana Highway Patrol. "We really got hit with those bigger storms."

"You're looking at roughly a 19 percent increase in the number of wrecks we had," he said.

Things got seriously busy with a storm that began Dec. 2.

"We investigated 261 crashes in that 10-day stint," Edgell said.

Clearing the streets of the city of Billings has been particularly time- and money-intensive, said Vern Heisler, deputy director of Public Works. "Our plowing efforts have exceeded last year by $800,000."

As the freeze and thaw cycles of early spring begin, potholes have begun to take a toll on cars across Billings, too.

Two crews of three men and one pothole-filling machine are out on city streets filling in the holes, but more holes could emerge as the season wears on, Heisler said.

A harsh winter is be perilous for motorists, but good for tire stores and alignment shops across the town.

"Anytime there’s a winter like this, I wouldn't even say it’s just snow tires, its all tires," he said.

He reckons business is up 10 percent this winter.

Drivers who'd hoped to squeeze another season out of their tires were unable to navigate the deep snow that Billings saw this year and were forced to get new tires.

" 'I can’t get through the side streets' is a common complaint," Kilwien said.

Potholes also can throw the alignment out or may ruin a wheel.

One business owner said he's fine with the forecast.

Mike Craighill, the owner of Soup and Such, said his business does well in the snow — as long as it's not too cold.

"Super cold days are almost as bad as super hot days, because we depend on walk-in traffic," he said. "Thirty degrees is a sweet spot for us."

The business has sold about 10 percent more soup this winter, he said.

The baked potato chowder gets more popular too, he added. Cold weather and soup just go together.

"What do you want?" he asked. "You want warm and comfort food, and there’s nothing better for those two things than soup."

The march to 100 inches of snow continues

March closes the same way it opened — with snow

With the 100-inches-of-snow-in-a-single-season milestone met for the first time in Billings’ recorded history as of Monday, it can just stop s…