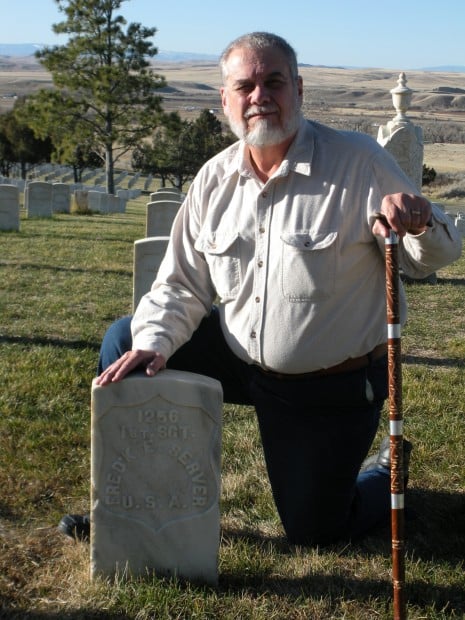 Rickard Ross kneels at the grave of his great-grandfather, Frederick Server, at Custer Battlefield National Cemetery. 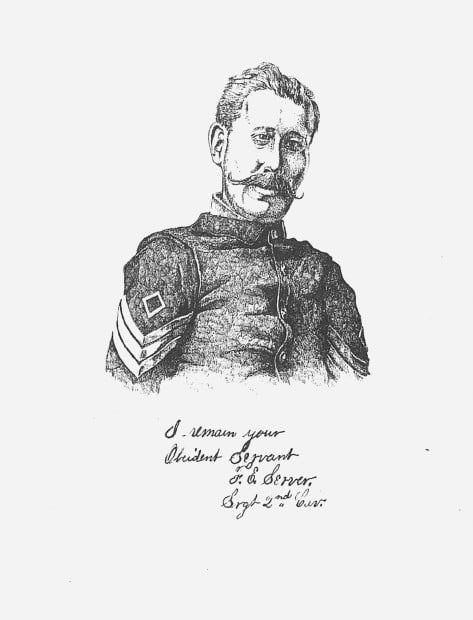 A drawing of Frederick Server.
By LORNA THACKERAY Of The Gazette Staff

Rickard Ross never got to meet his great-grandfather.

But just about everyone who played a role in Montana's early history did. From the first explorations of newly created Yellowstone National Park to the Little Bighorn campaign of 1876, Frederick Erastus Server was there. Arguably, he was the first white man to discover the dead at the site of the Little Bighorn battle.

He carried messages through mountains swarming with desperate Nez Perce in their futile flight toward Canada in 1877 and nearly starved to death on an ill-conceived midwinter expedition to explore the Snake River.

In 10 years with the 2nd U.S. Cavalry, Server worked out of some of Montana's major forts — Ellis, Assiniboine and Custer — and was familiar with the rest.

Then, when he finished his military career, he operated the first hotel at Custer and, later, the first hotel at Crow Agency. Among those frequenting his establishments and counted as friends were Teddy Roosevelt, who danced at impromptu galas at the Server Hotel; famed clergyman Henry Ward Beecher; historians Walter Mason Camp and Eli Seavey Ricker; and Western artists Joseph Henry Sharp and Edgar Samuel Paxon.

His acquaintances included Cheyenne Chief Two Moon and Sioux Chief Gall, both veterans of the Little Bighorn. Among Server's best friends was Old Crow, a Crow war chief, who was with him when they encountered the first corpses at the battlefield two days after the 7th Cavalry's defeat.

Legendary scouts Luther "Yellowstone" Kelly, Mitch Bouyer, Charlie Reynolds, Thomas LaForge and George Herendeen were his friends. Curly, Custer's Crow scout who claimed to have watched the battle from a distance, was a frequent guest at the Server Hotel in Crow Agency.

Ross, a retired Yellowstone County sheriff's lieutenant, had heard many tales of his great-grandfather's exploits from his grandmother and his father as he grew up in Billings. His quest to fill in the rest of the story began about the time Ross graduated from Central High in 1963.

Now living in Austria where his wife is employed at the U.S. Embassy, Ross has just completed his colorful ancestor's biography — "First to Arrive on Custer's Battlefield with the Montana Column." It was published late last year by Upton & Sons as the ninth volume is its Battle of the Little Bighorn Series.

"I knew there must be more to know about my great-grandfather, so I began looking for additional information," he said in an e-mail to The Gazette. "It was a slow process. Researching and writing this manuscript has taken more than 40 years."

He recalls going to the Little Bighorn Battlefield was when he was 9 years old in 1954.

"I remember my father showing me and my sister where our great-grandparents were buried in the Custer National Cemetery," he said. "I felt quite happy knowing that my great-grandfather was a family hero."

His grandmother — Server's daughter — gave Ross an arrowhead that had been found on the battlefield.

"The arrowhead was a common trade point made of forged iron nearly three inches long and three-quarters of an inch wide with serrations on the basal projection," Ross said. "I pondered what the scene of the battle looked like as Grampa Server and the Second Cavalry came upon it that fateful day."

As Ross followed Server's trail from his birth in Philadelphia in May 1855 to his death at Crow Agency almost exactly 56 years later in May 1911, he began to realize the breadth of his great-grandfather's role in Montana history. His reason for writing the book was to make sure that Server's history survived, not only for his family, but for others with an interest in the details of the Montana frontier.

His book is brimming with local history and especially with tales of Montana's storied military campaigns. Ross, from his great-grandfather's point of view, adds some perspective to the Montana column, which was supposed to rendezvous with the 7th Cavalry near the Little Bighorn in an effort to force the Sioux onto reservations in the Dakotas. But the Montana column arrived on the proposed meeting date to find it was two days too late to come to Custer's aid.

Commander of the Montana column, Col. John Gibbon, took a lot of heat from his contemporaries and from historians for not engaging hostile Sioux and Cheyenne as he wandered across the state that spring, waiting for the 7th Cavalry to arrive from forts in North Dakota.

"I believe the biography of Fred Server clearly explains the difficulty the Montana Column had in first, determining the location of the declared hostile Indian camp and, secondly, being unable to cross from the north side of the Yellowstone River to the south side where the Sioux and Cheyenne were," Ross said.

The river was raging with spring snowmelt after a fierce and prolonged winter.

Most accounts of the Little Bighorn battle credit Lt. James Bradley, who was in charge of the Montana column's scouts with discovering the fate of the 7th. But Ross contends that Server was either the first to come upon the horror of the battle scene or made the discovery at about the same time Bradley did in a different part of the battlefield.

Two years before his death, Server was interviewed by The Billings Gazette on the 33rd anniversary of the battle.

"There have been so many versions of the exact happenings at the time of the massacre that I hesitate about telling what I know of the affair," he told a reporter. "For the exact truth about the masere (sic) is not as highly tinted with glory as it might be."

He was no fan of Lt. Col. George Custer and laid the blame at his door.

"In the first place the massacre would never have occurred if General Custer had not disobeyed orders," he asserted in the interview.

When Curly brought news of the defeat, "there was not one of us who believed the tale of the Indian for we thought it was but some scheme to bring the troops into an ambush," Server said.

He and Old Crow were sent to find the truth of Curly's tale, he said, and discovered the bodies of some of Custer's men.

"I can't attempt to describe the scene," he said. "It has been a vivid impression in my mind, for I knew personally every man who fell with Custer that day and many of them were warm friends."

The hardback book is available at uptonbooks.com for $55.

Lorna Thackeray can be reached at 657-1314 or lthackeray@billingsgazette.com

A man walking his dog on the West End of Billings Friday evening told police he found an unclothed body in a ditch.

At least 50 people gathered to memorialize 15-year-old Khoen R. Parker who was shot and killed in an altercation on Monday.

Rickard Ross kneels at the grave of his great-grandfather, Frederick Server, at Custer Battlefield National Cemetery.