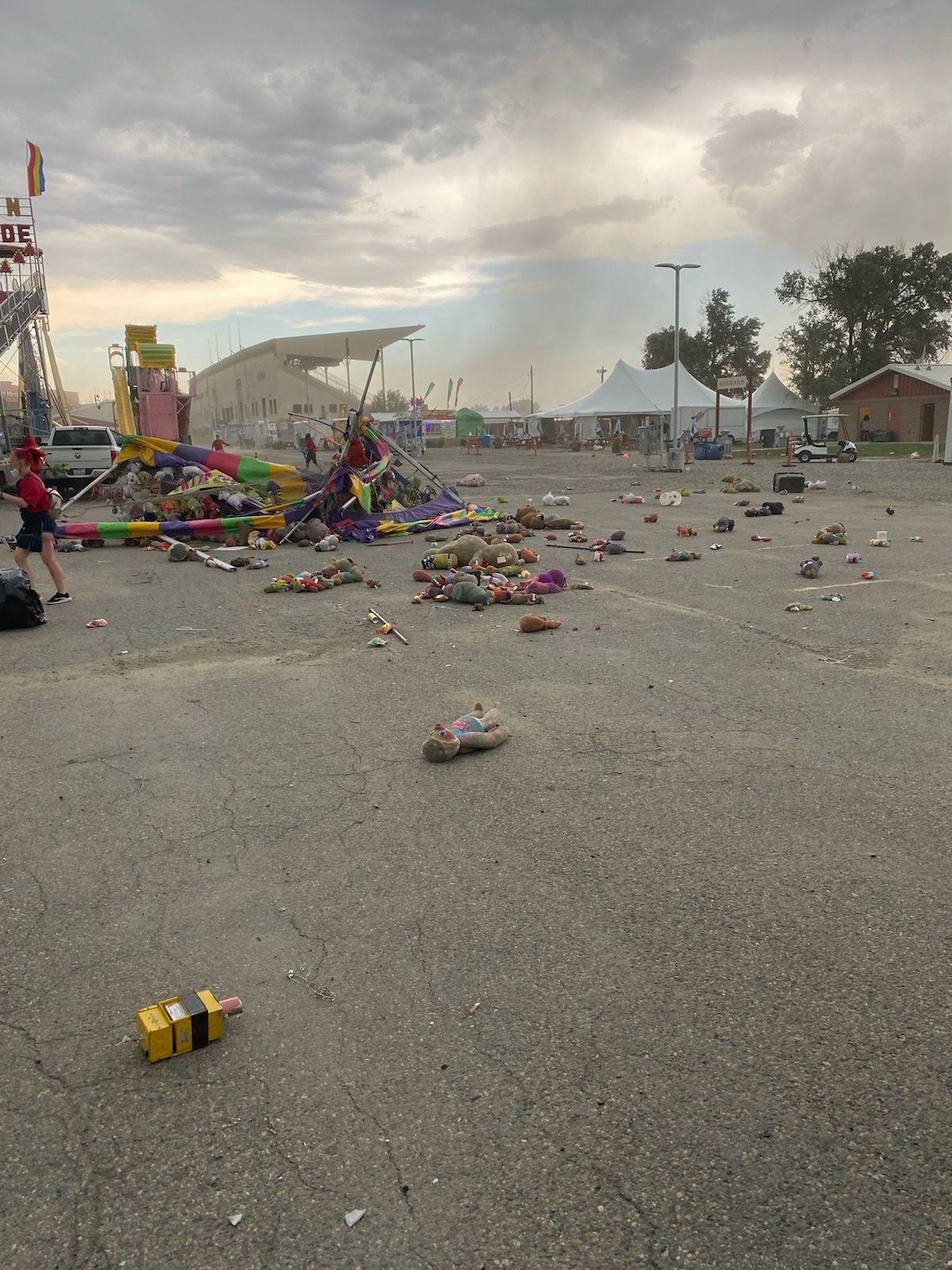 A brief but powerful storm blew through Billings Thursday afternoon scattering parts of the MontanaFair's carnival.

A thunderstorm approaches Billings as seen from the Shiloh Conservation Area on Thursday. 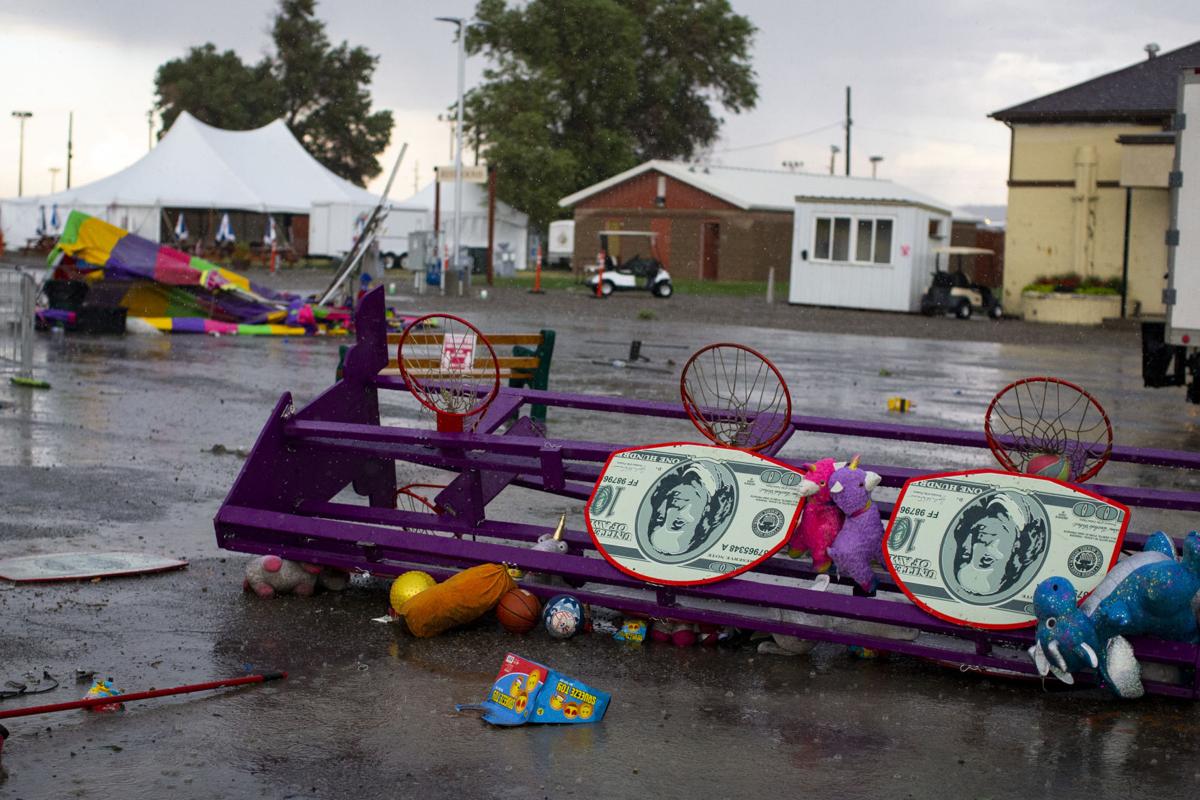 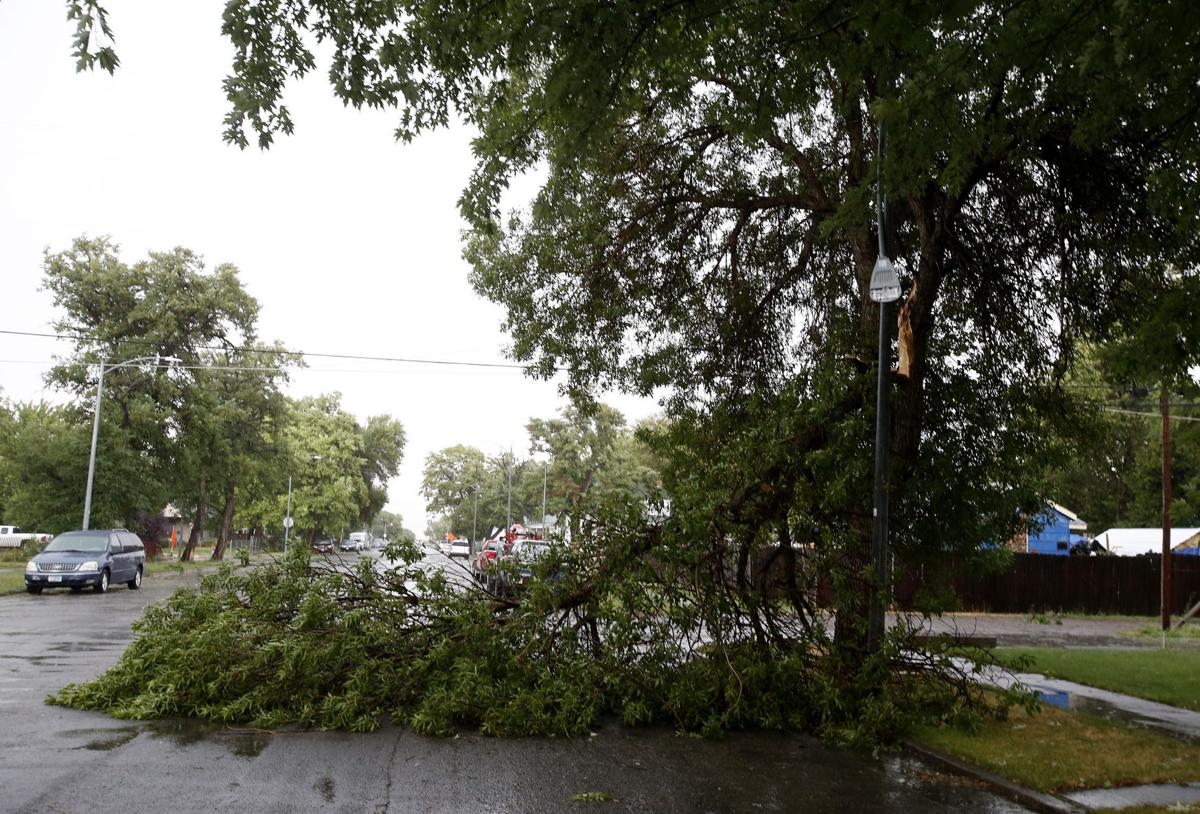 A large branch knocked down a street light at South 31st Street and 3rd Avenue South during a thunderstorm Thursday. 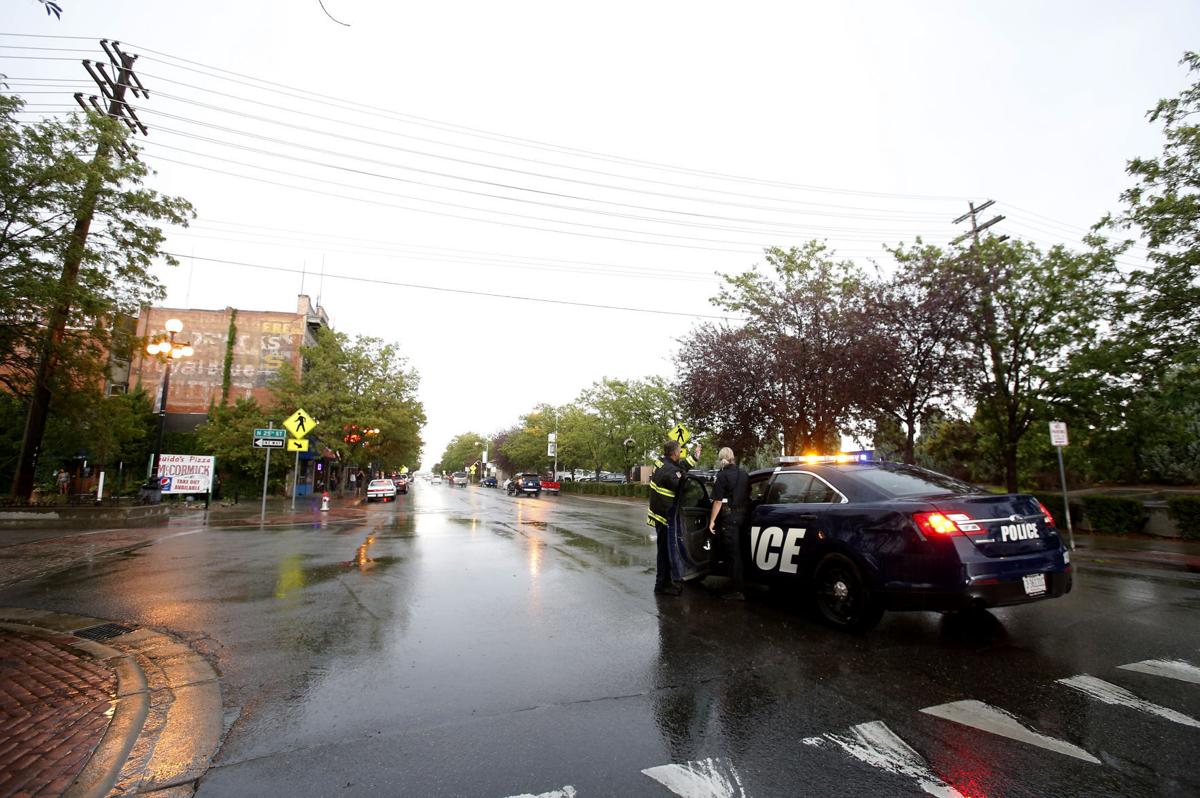 First responders prepare to block off Montana Avenue after a power pole was blown loose during a thunderstorm on Thursday.

Just before 5 p.m., a surge of winds brought by a thunderstorm had Metrapark staff ushering visitors into the pavilion and closing down vendors. Around that same time, a gust of wind collapsed three tents, sending two carnival workers to the hospital with minor injuries and littering stuffed animals throughout the fairgrounds.

“We’re not exactly in Tornado Alley, but there were plenty of people who saw the lightning, felt the wind and knew it was probably time get indoors,” said Darren Johnson, a kettle corn vendor who waited out the storm beneath the red canopy of his stand.

Following several weeks of “Sneak-A-Peak,” showcasing a limited number of vendors and carnival rides, MontanaFair officially launched Thursday with the beginning of its 4-H and FFA competitions. About an hour after visitors began trickling into the fair, dark clouds and lightning could be seen to the west.

A forecasted thunderstorm gained momentum in the Laurel area earlier in the day, and in Billings temperatures peaked at 95 degrees.

“Any time you can pop a thunderstorm on a 95-degree day, you’re going to have a lot of wind,” said Dan Borsum, a meteorologist with the National Weather Service in Billings.

Borsum said the storm escalated in height at the Stillwater and Yellowstone county borders, and sent a burst of wind through a narrow corridor in downtown Billings and into MetraPark. Although NWS measured winds up to 52 mph, he said based on some of the reports he heard throughout the afternoon, they could have been higher.

Along with the wind and the rain came lightning, and Borsum said the NWS tracked nearly 90 strikes in the Billings area.

From inside of his canopy at the fair, Johnson stood at its center anchoring it to the ground with a rope looped through his belt. At each of its corners, buckets filled with 75 pounds of sand also made sure that his kettle corn operation stayed put. He’d also untied two flaps to counter the winds that pulsed for about 45 minutes after the storm hit the city just before 5 p.m.

“I considered heading inside to the pavilion, but figured that lightning would go through this canopy a lot easier than it would go through me,” said Johnson, who has worked as a vendor at MontanaFair since 2014.

MetraPark General Manager Bill Dutcher was on site when winds first started bringing clouds of dust into the fair. Within 10 minutes of dispatchers notifying him to clear the fair, all visitors had made their way into the Montana Pavilion, the Expo Center and the Chiesa Plaza.

“This isn’t our first rodeo when it comes to this sort of thing,” Dutcher said from Cedar Hall near the Carnival Lot, where he met with emergency crew members and called in staff and carnival employees from the rain.

Just as the park was being cleared, a crosswind brought down three tents in the carnival lot staffed by the Mighty Thomas Carnival. Two employees were taken by American Medical Rescue to be treated for minor hand and leg injuries, Dutcher said. Deputies from the Yellowstone County Sheriff's Office and members of the Yellowstone County Disaster and Emergency Services also arrived at the fair just after 5 p.m.

“This is just another case of everyone working together when they need to,” Dutcher said.

With the carnival lot cleared, carnival workers either took shelter from the sheets of rain beneath the Moby Dick ride, or bagged up some of the stuffed animals scattered by the collapse of the tents and collected in Cedar Hall.

“We just had a safety training this past Tuesday, and I’m glad we did,” Dutcher said.

He said park and carnival staff also meet every day before the grounds open to the public, with the forecasted weather being a part of that briefing.

By 6 p.m., the dozens of visitors who had taken shelter made their way back outdoors. Within two hours, all of the debris of the collapsed tents had been gathered, and the only threat to the public was the occasional puddle. Attendance had also tripled during that time, according to park staff.

During last year’s fair, a storm brought rain and hail that similarly scattered prizes and soaked equipment, but passed without any injuries.

Elsewhere in Billings, the city’s police department reported that a power line brought down by the storm briefly closed off Montana Avenue at N. 27th Street.

Retrospective: Carnies at the fair

MontanaFair opens with plenty of space for attendees

MontanaFair has a history going back for more than a century in Billings. The summer staple returned Friday, albeit with restrictions that adhere health recommendations.

A line of Papa Smurfs, teddy bears and other stuffed animals floated away from Ronald Wells' booth as a veritable "river" from heavy rainfall …

Firefighters are beating back a small wildfire in the Pryor Mountains that ignited Thursday afternoon, and a fire near Miles City nears containment Friday as evacuation orders for nearby homes have been lifted.

MontanaFair attendance was 70% less than usual during pandemic

Attendance at the 2020 MontanaFair was considerably lower than it has been in years past, and revenue is expected to be similarly short.

A brief but powerful storm blew through Billings Thursday afternoon scattering parts of the MontanaFair's carnival.

A thunderstorm approaches Billings as seen from the Shiloh Conservation Area on Thursday.

A large branch knocked down a street light at South 31st Street and 3rd Avenue South during a thunderstorm Thursday.

First responders prepare to block off Montana Avenue after a power pole was blown loose during a thunderstorm on Thursday.