A bull moose wandered into Billings West End Monday and has taken up a brief residence within the city limits prompting police to urge the public to give the massive animal space to find his own way out of town.

As the animal roamed the neighborhoods, campuses and fields around the West End and Midtown, people took to social media to document their encounters to include posts from ZooMontana. Police also took to monitoring the creature, which can be very dangerous to people.

"Patrol Officers responded to multiple calls yesterday and did their best to keep the moose from entering areas where there were a lot of people on foot, but an animal this large is hard to entice to only go where we want him to go, and continually pressuring him only adds to his stress. The Police Department would prefer to allow the moose to find his own way out of town and are asking the public's help in allowing this to happen," BPD Lt. Matt Lennick wrote on Facebook Tuesday morning.

Police were continuing to watch the animal and Montana Fish, Wildlife and Parks was "aware of the situation" Lennick added. "Moose can be dangerous when frightened or cornered so please keep a safe distance away," he added.

Moose on the loose in Billings

Moose on the Rims

In a unanimous vote, the Montana Fish and Wildlife Commission on Thursday approved the purchase of 5,677 acres in the foothills of the Big Snowy Mountains, north of Ryegate. The deal now faces state Land Board approval.

Otters in the bathtub: How a Montana zookeeper is living her dream

Chief Wetlands Keeper at the zoo, Allyson Dredla. Her job entails taking care of animals that inhabit wetlands and includes the new waterfowl refuge that the Zoo is currently building.

Apple has 'threatened to withhold Twitter' from the app store, says Elon Musk

'Gaslighting' Is Merriam-Webster's 2022 Word of the Year

'Gaslighting' Is Merriam-Webster's 2022 Word of the Year 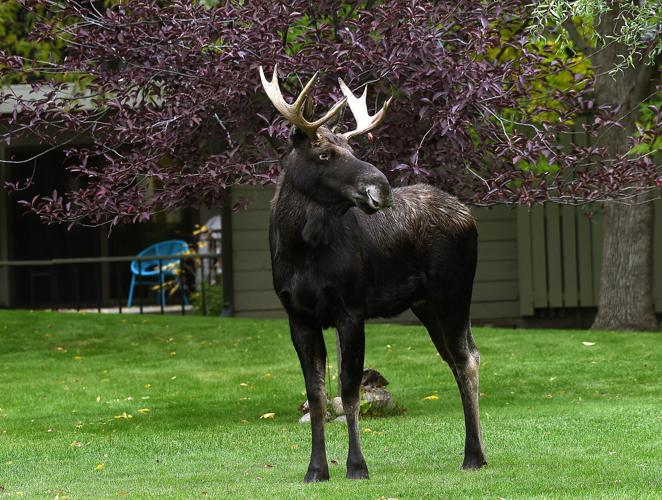 A Facebook post Monday morning from the Billings Police Department asks the public to allow a bull moose room to find his own way out of town.