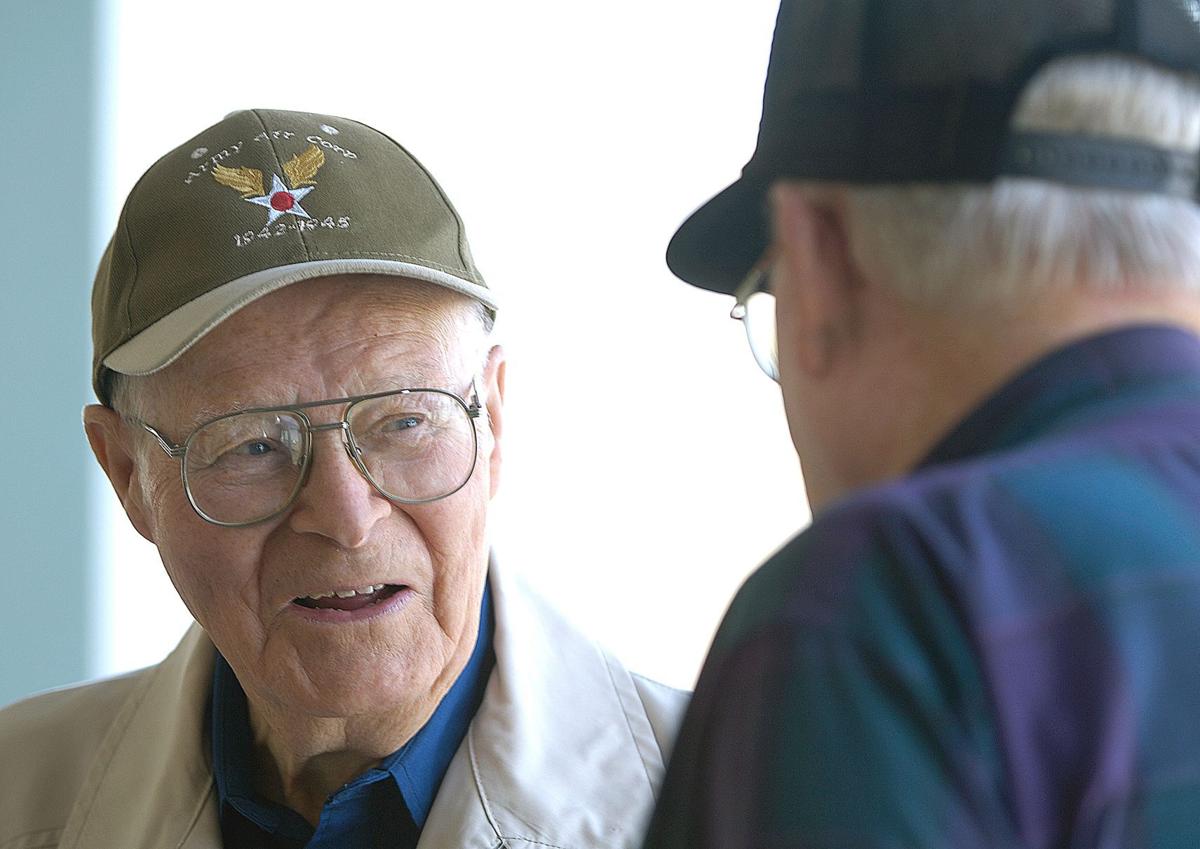 George Hartley, of Worland, Wyo., was a pilot instrument instructor for B-17 crews during WWII. He traveled to Billings on May 31, 2006, to ride in a restored bomber that was touring the country for the Experimental Aircraft Association. 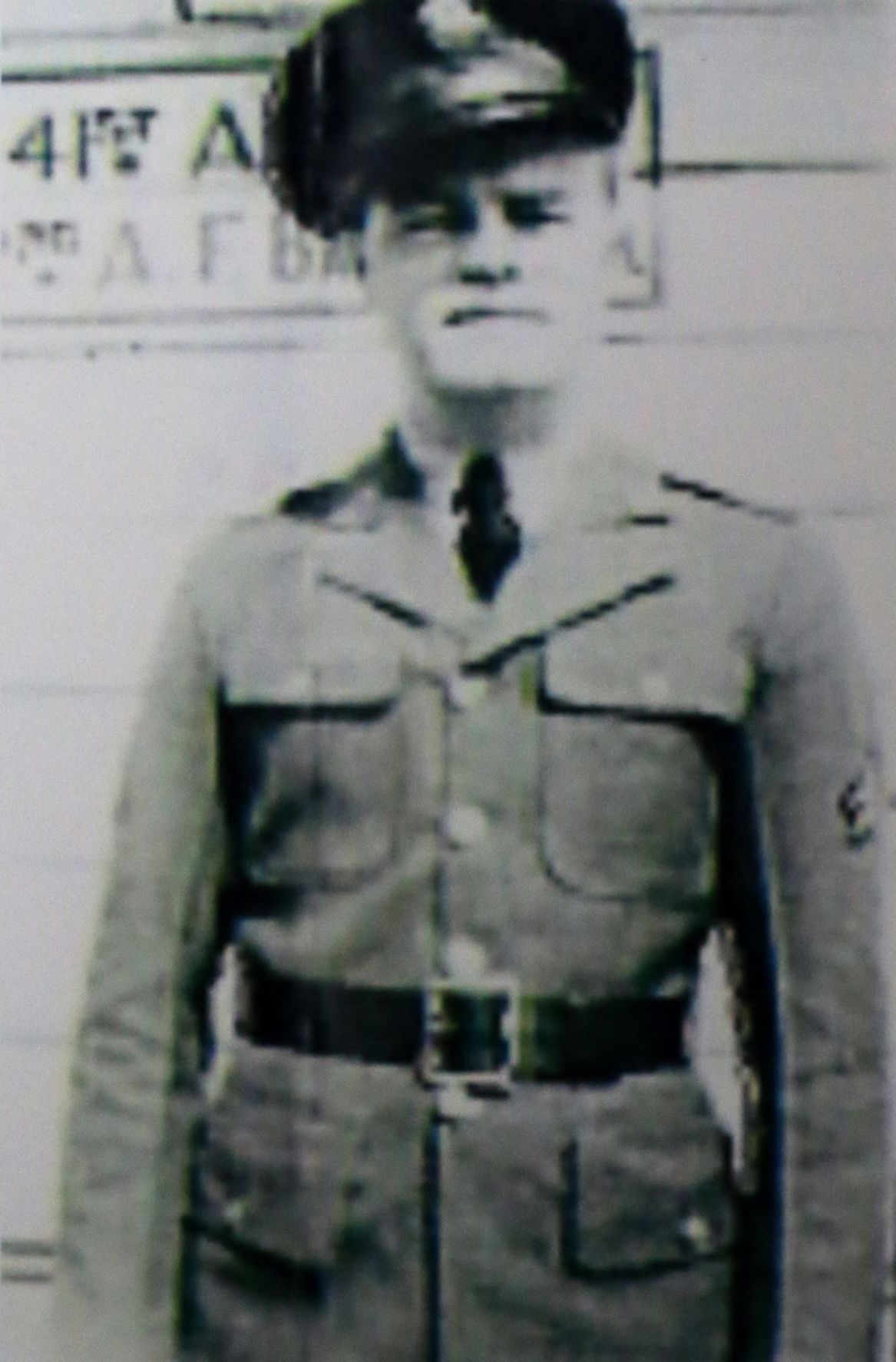 George W. Hartley was born in Melstone on March 31, 1921, and moved to Billings when he was 12. He enlisted in the U.S. Army Air Corps in April 1941. When he was honorably discharged in October 1945, he was with the 777th Bombardment Squadron and had been a Link Trainer instructor, teaching pilots how to fly on instruments and a mechanic working on B-17 and B-24s.

He was in campaigns in Rome, Naples and Southern France.

He wrote about some of his experiences in World War II in 1990 while recovering from pneumonia.

This is his story, in his own words.

I enlisted in the Army Air Corps on April 1, 1941, the day after my 20th birthday in Billings. A high school friend, Dick Rogers, enlisted at the same time. We left Billings the next day on a steam train headed for Fort Missoula, Mont. We were given a nice farewell by our families. I remember Dick had on a black cowboy hat.

The Sunday of Dec. 7, 1941, Dick Rogers and myself were on a pass in civilian clothes in Spokane (Hartley was stationed at Geiger Field, Spokane), spending the evening at the roller skating rink. Military Police came in and said that all military personnel passes are cancelled and we will return to bases immediately. I think we asked, "Why?" and they said, "You will find out when you get to your bases." We were in uniform from then on until discharged and back to our hometown.

I went on guard duty at Geiger Field. We went on shifts around the clock. This went on for quite some time. They were taking the attack on Pearl Harbor seriously. They were afraid of sabotage. I got orders that I was to go to Las Vegas, Nev., to an aerial gunnery school to be trained to operate the 50-caliber machine guns in a B-24 or B-17 bomber.

Hartley was sent overseas in spring 1944. He remembered drilling every day during the two-week trip as the convoy made its trans-Atlantic journey.

We were issued bayonets, helmets, trench shovels, pup tents, mess kits, canteens, first-aid packs which we kept in a horseshoe backpack. We had this onboard ship. We always had the bayonet handy in case we were swept overboard for any reason — self defense or whatever.

We were told that they detected German submarines, but kept changing their course, like zigzagging to outsmart them. We were sure hoping that they would outsmart them. A Navy Destroyer came from possibly Africa or near Italy or Sicily and escorted us from part of the Atlantic through the Mediterranean Sea to Italy.

We docked on May 31, 1944 in Naples, Italy. Before leaving the ship, we put on our horseshoe packs on our backs with steel helmets and marched through Naples to a waiting Italian train. Of course, everything wasn't on time, so we waited like the Army — hurry up and wait. I remember as we were marching through Naples, watching the hungry faces and bewildered look of the children and adults. They were glad to see us, but the terribleness of war showed on their faces. They would beg for chocolate and caramel and chewing gum (mostly the children). Of course, we couldn't break ranks and I felt very sorry for them. Italy had surrendered earlier in the war, so the United States and her allies were trying to feed them the best they could. Southern Italy was the poor peasant country — some grew wheat and had chickens and eggs. If they were lucky, they had some tame rabbits to eat. On the whole, they were pretty poor.

The Fifth Army and Allies liberated Rome on June, 4, 1944 — four days after we docked at Naples. I have a souvenir commemorating the Allies' entrance into Rome. The Italian people were selling them.... The Italians salvaged some aircraft tubing from the downed aircraft; tubing with "Roma" engraved on it. These souvenirs I got while I was in Rome. At Panatela Air Base, we stayed in five-men Army tents. We had to dig trenches all around our tents, or should I say, part way around to have something to jump into in case of an enemy raid. We never had one, which I am very thankful for. Later on the Link Trainer personnel cleaned out an old Italian castle like home down near the flying line. It had stables on the ground floor and rooms up above. It even had a lookout tower on one corner. Our Link Trainers were put up in a big stable-like room. We stayed in another donkey stable that we cleaned up for our Army bunks or cots. We got some wheat straw from an Italian peasant farmer and made straw ticks out of our mattress covers. There was an almond orchard near our base, so we picked almonds and dried them on the tile room where we lived — and got our fill of almonds.

We had turkey and the trimmings at Thanksgiving and Christmas. There was quite a bit of snow the Winter of 1944. It would get quite cold because the wind would blow from the two seas across the boot of Italy. In early Spring of 1945, I picked up an infection on the back of my right knee. It kept getting worse until I had blood poisoning in my leg. I finally went on sick call. When the doctor saw my leg, he said, "We will have to get you to the hospital fast." An Army ambulance took me to the 4th Field Hospital. I was put in bed and the nurses started giving me sulfa pills and lots of water. They also put packs on my legs. The nurses took good care of me and the other soldiers that were wounded from flying missions and soldiers with other sicknesses as well.

It sure was great news when V.E. Day came along on May 12, 1945. From then on, we were talking about when we would get to leave Italy. We exchanged some of Italian lira for American currency. I saved some of my Italian coins. I wish I would have saved some Italian paper money. We couldn't take our steel helmets with us. We could only have so much weight in our duffel bags. I felt bad that I couldn't take my steel helmet, so I had to leave it in Italy. Probably some Italian is wearing it. Ha.

Honor of a lifetime

Family members recall that a highlight of Hartley's life was when a B-17 came to Billings in 2006. Billings Gazette Chief Photographer Larry Mayer arranged to have Hartley get a ride on the plane before the public. It remained a highlight of his life.

When asked later if he'd go on one of the Big Sky Honor Flights to Washington, D.C., Hartley politely declined.

"I already went on my plane ride," he said.

"World at War" features the journals, letters, diaries or interviews with the men and women who served in the Armed Forces during World War II. The series will run periodically in The Billings Gazette and is made possible through the support of MasterLube. If you have letters, journals, diaries, reflections or stories to share for possible inclusion, please contact Darrell Ehrlick at dehrlick@billingsgazette or (406)657-1289.

Skittles sells candy dispensing bed that retails for less than $2

Some gave all: Historians revive memories of Missoula's WWI dead

You can trace the occasional life of Keith Blakely through the early years of the 20th century.

George Hartley, of Worland, Wyo., was a pilot instrument instructor for B-17 crews during WWII. He traveled to Billings on May 31, 2006, to ride in a restored bomber that was touring the country for the Experimental Aircraft Association.