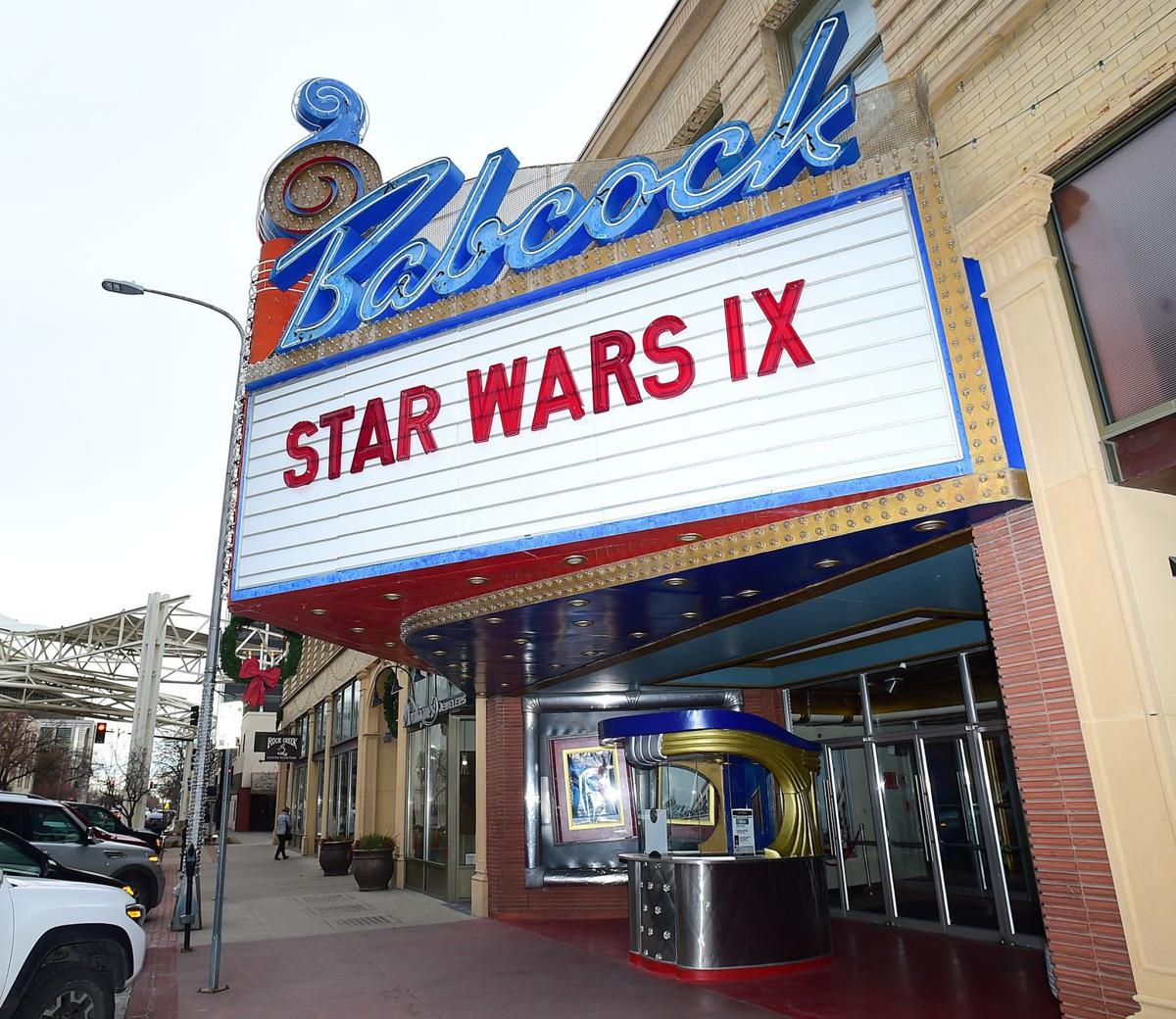 The Babcock Theatre will be showing the newest Star Wars film this week. 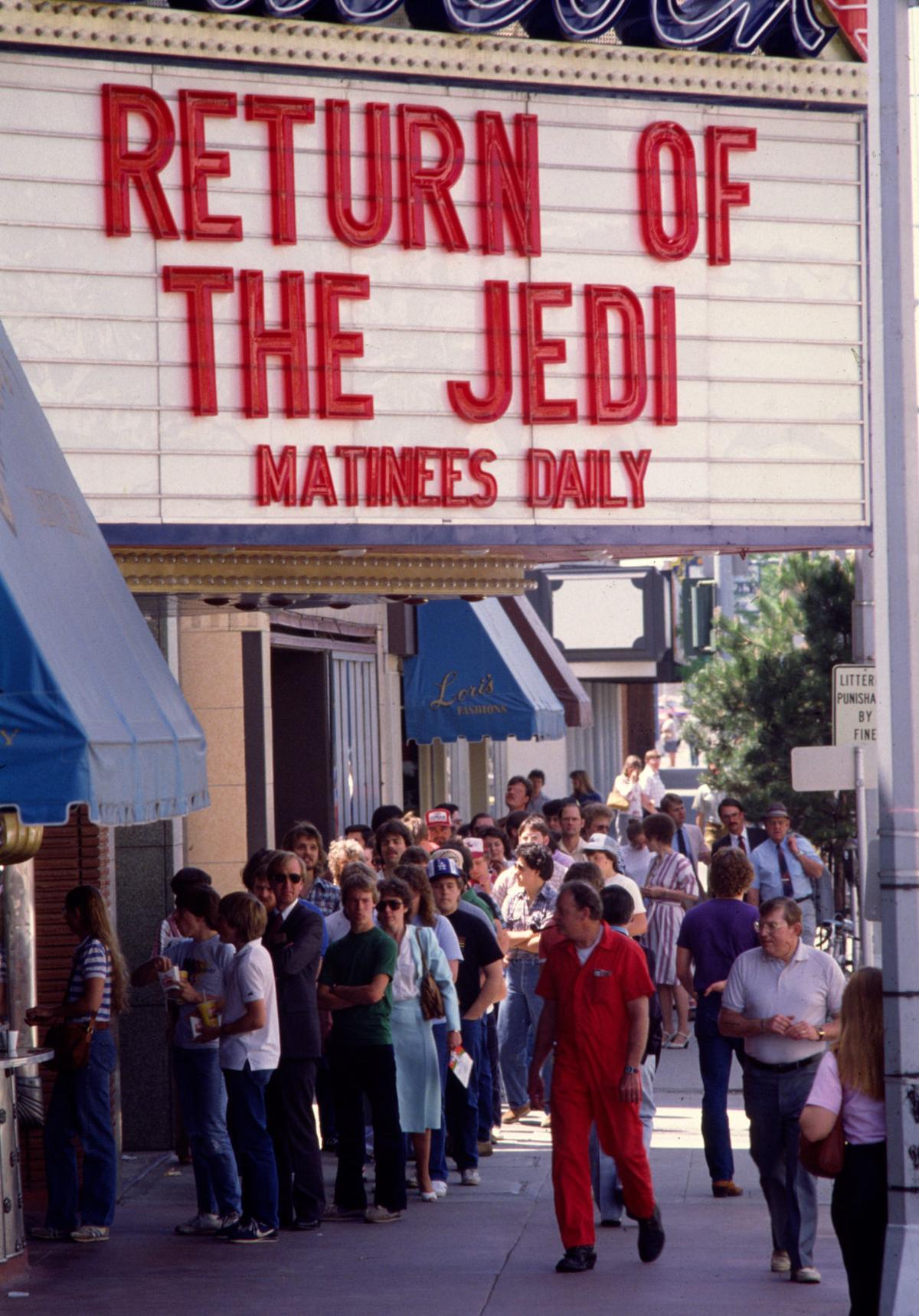 A line forms outside of the Babcock Theatre in downtown Billings during the premiere of "Return of the Jedi," the third film in the original Star Wars trilogy, on May 25, 1983.

A line forms outside the Babcock Theatre on May 25, 1983, during the premiere of "Return of the Jedi," the third "Star Wars" film.

In the summer of 1977 as moviegoers across the country were swept up in the excitement of “Star Wars,” for the first time, the movie screens of Billings might as well have been in a galaxy far, far away.

The movie premiered in Hollywood on May 25, 1977. By June 10, a calendar listing in the Billings Gazette promised that “The starship adventure that’s become a phenomenon is coming to Billings within three weeks of its release.”

When “Star Wars” finally hit the screens in Billings, the wait had done little to diminish local interest.

“I’ve never seen anything like it,” Lanny Wagner, the City Manager of TOI Theatres told The Billings Gazette on June 24, 1977. “At Rimrock, we’ve had to turn hundreds away. We sell out every night, including Tuesday (a traditionally poor movie night.) And we ran an extra midnight show both nights last weekend and packed the house.”

Thursday, Billings is gearing up for the final installment of the saga that has created its own pop-culture empire across the world for 42 years. “Star Wars: The Rise of Skywalker” is the ninth addition to the original story started by George Lucas.

Billings resident Kim Mahoney guesses she was about 10 years old when her family loaded up in the car and drove from their home in Fromberg to Billings to see “Return of the Jedi” at the Babcock. The price back then of $4.50 for an adult ticket was newsworthy enough that The Gazette wrote a story explaining the higher prices. A contract by 20th Century Fox required theaters charge 50 cents more than normal during the first four weeks of the movie’s run. Still, people lined up down the street to get tickets at the Babcock.

“It was definitely a special thing when you got to go downtown to the Babcock,” Mahoney said. "It was just a whole different theater type experience. You got to sit up on the balcony and be somewhere special and look down on this cool architecture, even though I wouldn’t have known that word back then."

At that point in her life, Mahoney said she’d seen the earlier Star Wars movies and that afterward she was always Princess Leia on the playground. She said she plans on seeing the new movie at the Babcock once again and is doing her best to avoid fan theories and spoilers. “I’ve watched one trailer,” she said. “I don’t know anything. I want to experience it for myself.”

Back when the first movie came out in 1977, The Gazette sent a reporter to the theater to get reactions from moviegoers. Bill Woessner, now 70 and a professor emeritus of hydrogeology at the University of Montana, was a 28-year-old graduate student doing research in Lame Deer at the time.

“It’s the new Flash Gordon,” Woessner said then. “I thought the special effects were good.”

“Flash Gordon” relied on strings and model ships to represent space travel, Woessner elaborated Wednesday, whereas in “Star Wars,” the special effects were on “new ground." In time, the series' popularity diminished its original magic, he said.

“You started to learn how they actually did some of the special effects with special programs on television, so some of the mystery went out of what they were able to do on screen,” he said.

Aside from the special effects, Woessner said a single moment is still vivid in his mind.

“I remember, and still to this day, is the effect of Luke Skywalker being at his house where he lived, and then he looked off at sunset and saw two suns setting in the distance. And to me, that was sort of a, ‘Wow, wouldn’t that be something, in a world where there were two suns?'”

Woessner said he’s planning on seeing the new movie with his wife Jean and their children and grandchildren.

At the theater the same night as Woessner in 1977 was 10-year-old Cameron Javid. He went to see the movie with his father Fred Javid, who owned numerous shoe stores throughout the state, including the high-end shoe store JaVee’s Bootery.

Cameron Javid, now a retina specialist eye surgeon in Arizona, still remembers what he told a Gazette reporter nearly word-for-word: “It was good, especially when they bombed each other." Javid saved newspaper clipping in a box of other memorabilia from his childhood, when he lived in Great Falls and Billings.

Laughing in 2019, Javid explained what he meant. “What I was referring to was the special effects of the lasers on the ships. I’d never seen anything like that before,” he said. “It was so lifelike. At the age of 10 there was no question in my mind it was real.”

As he’s grown older, Javid said that he’s less taken with the special effects and more focused on the characters and the story. “That’s very heartwarming, some of the human elements the franchise touches on.”

He said that he’s carried on the tradition his father started, and now goes to every Star Wars premiere with his 12-year-old son Connor. Connor dresses up, and sometimes Cameron does too. The elder Javid may put on a costume this year, though he’s not sure which one. He’s hoping his son chooses the light side of the Force this year.

“He was Kylo Ren on the previous one, so maybe he’ll be a good guy this year.”

"Star Wars: The Rise of Skywalker" opens in Billings' three first-run movie theaters Thursday. The film is rated PG-13 and runs for 2 hours and 35 minutes.

The Babcock Theatre will have one showing Thursday 7 p.m. in 2D.

1983 "Return of the Jedi" premiere at the Babcock Theatre

With iconic costumes, movie magic lives on for Billings collector