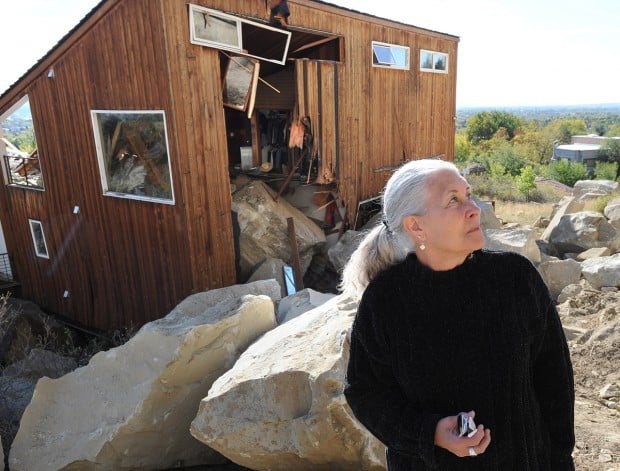 Jane Waggoner Deschner looks at a broken section of the Rimrocks where a slab of sandstone tumbled into her home at 1313 Granite Avenue on Saturday. Deschner was out of town when the rock tumbled into the house, knocking it from it's foundation. October 12, 2010. 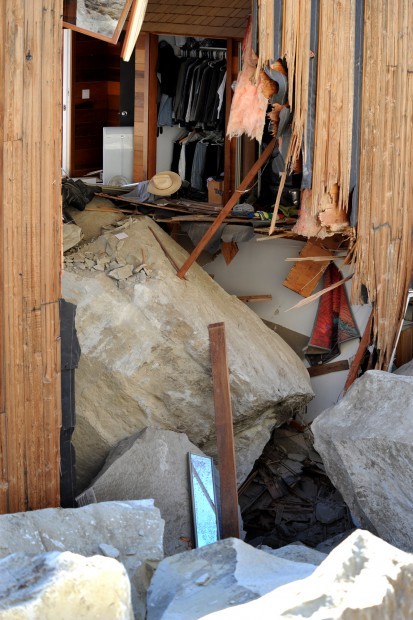 The home at 1313 Granite Avenue was heavily damaged after a boulder from the rims crashed into the house on Saturday. October 12, 2010. 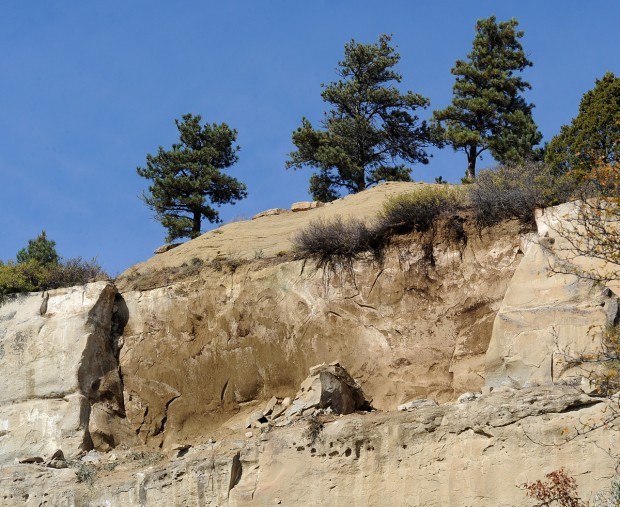 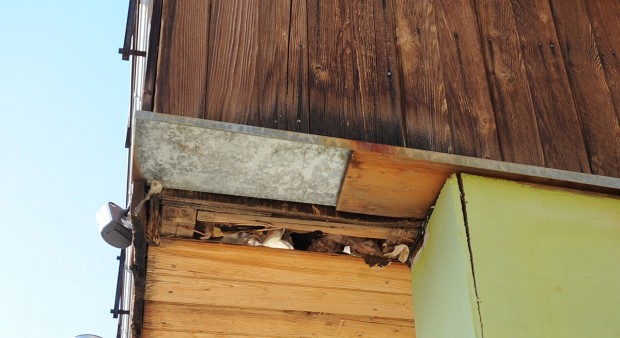 The home at 1313 Granite Avenue was knocked from it's foundation after a boulder from the rims crashed into it on Saturday. October 12, 2010.
ED KEMMICK Of The Gazette Staff

Jane Waggoner Deschner and her husband hope to hear by Friday whether damage to their house, which was partially demolished by a sandstone boulder last weekend, is covered by their insurance policy.

“Hopefully, by the end of the week, we’ll know what the rest of our lives look like,” she said.

Her husband, Jon Lodge, was home alone Saturday afternoon when an enormous slab of sandstone sheared off the Rimrocks above their house and broke into numerous smaller pieces. One boulder, an estimated 35 feet high, 25 feet wide and 18 to 20 feet thick, crashed into the east side of the house, destroying the master bedroom and a guest room below it.

Lodge was in the kitchen, next to the bedroom, when he heard the “deep, thundering roar” of the crashing boulder, followed by a heavy draft of air. He said it felt as if the whole house was somehow moving toward him, so he ran out onto the deck beyond the kitchen.

Jazzman John Coltrane was still playing on the stereo when the house stopped moving.

Deschner, an artist who usually works with found photographs and embroidery, was working as a visiting artist at Red Deer College in Alberta, Canada, in the fifth week of what was supposed to be a six-week stay. She learned of the disaster when a friend mentioned it on Facebook.

Deschner got home Sunday and took her first up-close look at the house Tuesday morning. The sunlit, angular house is at 1313 Granite Ave., at the north end of 13th Street West above Rimrock Road.

Yellow Fire Department tape ringed the property Tuesday and roadblocks closed Granite Avenue in front of the house. Deschner said the house is still considered too unstable to enter, though her husband was allowed to go in once, briefly, soon after the incident.

She said he grabbed his computer, an iPad and a phone. She said he realized later that he must really have given up his own jazz playing because he didn’t take his trumpet. He is also a mixed-media artist and the manager of Artcraft Printers.

Deschner said she at least had a car full of art supplies, clothes and other belongings with her in Alberta, while her husband didn’t even have a change of clothes.

They have lived in the house for 14 years and Deschner said it was very well made, resting on steel girders atop steel support beams. Even under the impact of the massive boulder, it didn’t come apart, but moved forward on the foundation about two feet, a movement clearly visible at the corners of the house.

The man who built it, Theodore Haddow, was so proud of his house that his family mentioned it in his obituary, Deschner said. The obituary, which ran in The Gazette on July 15, 2001, read in part: “He designed and constructed by hand a house that took 3ƒ years to build. It commands a view of Billings, from the base of the Rimrocks. The house survives.” It was finished in 1977.

Deschner said the setting was spectacular, with a view of four mountain ranges on a clear day, and the city of Billings spread out below.

The insurance question is still open because it’s not clear when the policy covers damage caused by “earth movement,” Deschner said. She and her husband were having a soils engineer inspect the property Tuesday, and later in the day, Terry Larson, a battalion chief with the Billings Fire Department, brought in a couple of crews to look at the damage as part of a training exercise.

It was Larson who estimated the size of the boulder that smashed into the house. The slab that sheared off the Rims, he said, was about 120 feet long, 40 to 50 feet high and 20 to 25 feet thick.

According to reference tables, sandstone weighs a minimum of 86 pounds per cubic foot. At that figure, a slab the size of the one that broke off Saturday would weigh more than 10 million pounds, or 5,000 tons.

Deschner said people sometimes asked them if they worried about the danger of falling rocks. Last Friday, some out-of-town friends who were staying with Lodge asked the same question, and Deschner said he gave them his “standard line” — “It could happen in five hours or 50,000 years.”

In May, The Gazette reported that a huge piece of sandstone a few blocks east of Granite Avenue was considered to be in such danger of breaking off that the city was thinking of bringing it down in a controlled manner. The Rims in that area, and above Granite Avenue, are city parkland.

Deschner, meanwhile, said the destruction of their house has been devastating. Two 5-year-old grandsons, one in Bozeman and another in Washington, D.C., reacted in ways that brought tears to her eyes. The grandson in Bozeman sent Grandpa Jon, in a care package prepared by his mother, his favorite Star Wars blanket, telling him he could keep it as long as he wanted.

The grandson in D.C. told Deschner that she and Lodge could come live with them if they needed to. But Grandpa has a job and he needs to work, Deschner told him. The grandson replied that Lodge could have his father’s job.

“We’re really fortunate no one was killed,” Deschner said. “But you know what? We were hurt.”

A giant boulder crashed through a house at 1313 Granite Avenue Saturday afternoon. Fire and police were on the scene because of a possible gas…

Jane Waggoner Deschner looks at a broken section of the Rimrocks where a slab of sandstone tumbled into her home at 1313 Granite Avenue on Saturday. Deschner was out of town when the rock tumbled into the house, knocking it from it's foundation. October 12, 2010.

The home at 1313 Granite Avenue was heavily damaged after a boulder from the rims crashed into the house on Saturday. October 12, 2010.

The home at 1313 Granite Avenue was knocked from it's foundation after a boulder from the rims crashed into it on Saturday. October 12, 2010.
© Copyright 2021 Billings Gazette, 401 N Broadway Billings, MT | Terms of Use | Privacy Policy
Powered by BLOX Content Management System from TownNews.com.
You don't have any notifications.