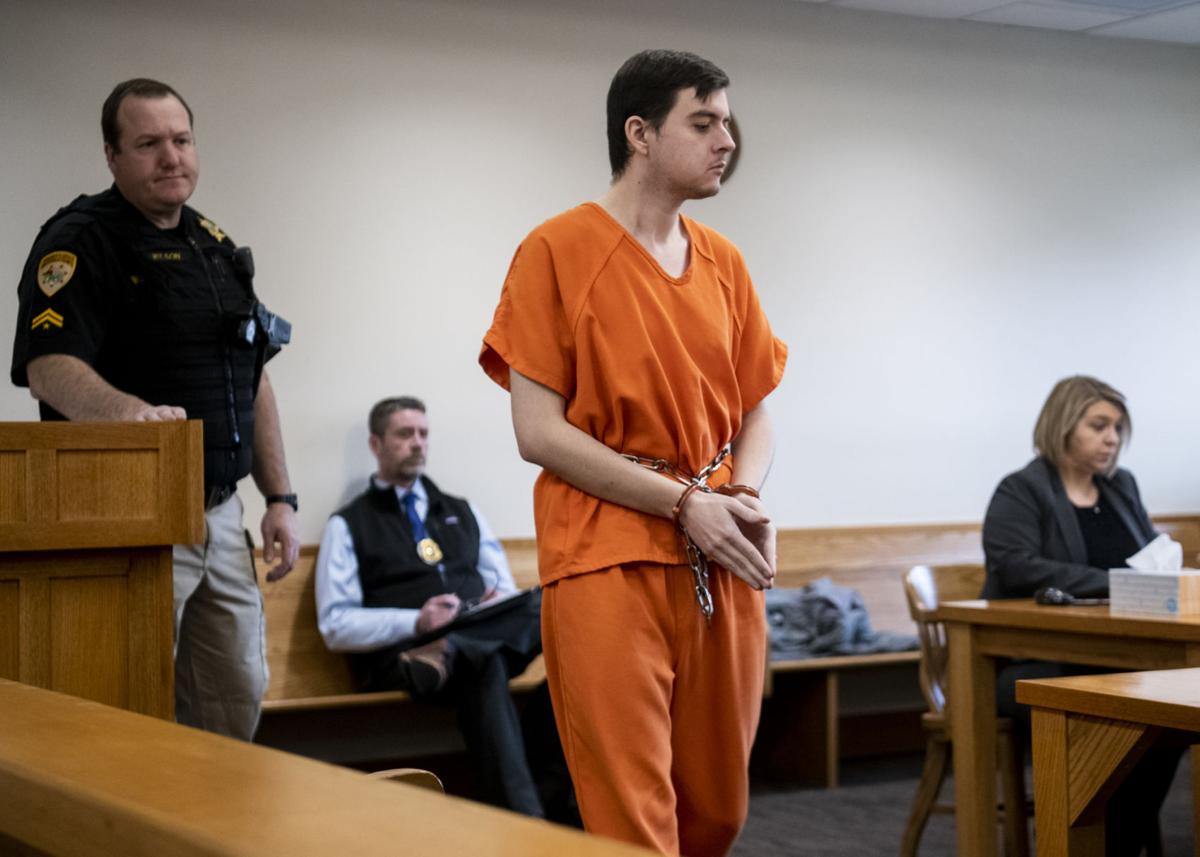 Johnathan Bertsch appears for an arraignment at the Missoula County Courthouse last march. Friday, Bertsch pleaded guilty to one count of deliberate homicide and three counts of attempted deliberate homicide in back-to-back shootings killed two and wounded two others, including a  Montana Highway Patrol trooper. 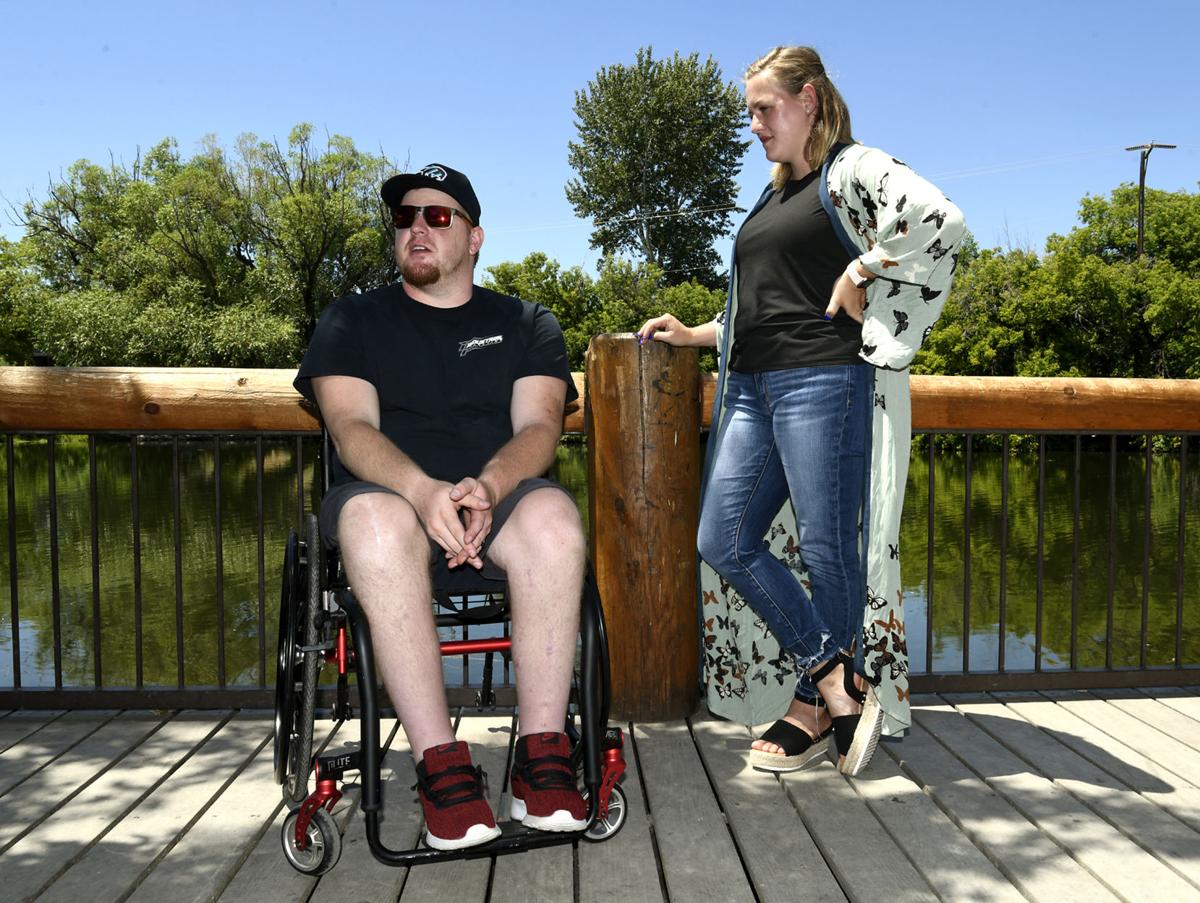 The man arrested after back-to-back shootings in March, one targeting three people in a pickup on Expressway west of Missoula and another in which a Montana Highway Patrol trooper was shot three times, pleaded guilty on Friday in Missoula County District Court.

After Friday's hearing, Casey Blanchard, one of the shooting victims, told the Missoulian he felt a sense of relief following Bertsch's guilty pleas.

"When we left I felt some joy out of it," he said. "It's another step closer to what we want, and what should happen."

Some 15 months after the shooting, Casey Blanchard and his wife Leah said it doesn't weigh on them daily, but rather reshaped their lives in a way they've learned to live with.

"Probably once a week," Casey Blanchard said of how often he recalls the incident. "It's everyday struggles I may have, especially when I'm on my own.

"I didn't think I'd ever have to take care of my husband, but here we are, and it's easy now," Leah Blanchard said. "It's our new normal."

Blanchard is in a wheelchair now, and keeps up with physical therapy twice a week. His mother, Julie, died months after the shooting due to complications from her gunshot wounds. Shelley Hays, Blanchard's longtime friend, died at the scene. Even as time passes without them, Friday's hearing brought their deaths back into focus.

"It's a big reminder that she's not here," Blanchard said. "Same with Shelley."

Bertsch had been set for a 10-day trial on Aug. 17. With that trial vacated, sentencing will be set at Bertsch's next hearing, set for Aug. 31. Missoula County prosecutors asked District Court Judge Shane Vannatta for two days to conduct the sentencing.

Blanchard said he had not intended to sit through 10 days of reliving the incident that claimed the lives of people close to him. But he and Leah said it was important for them to be there for Friday's hearing.

"I think it's good to let him know that we're still here," Leah said.

Prosecutors alleged the first shooting may have been a response to heavy exhaust from Julie Blanchard's pickup clouding Bertsch's SUV at Marvin's Bar west of Missoula. As Hays, Casey and Julie Blanchard drove back toward Missoula, they stopped when a vehicle behind them began flashing its headlights, according to charging documents. Casey Blanchard got out of the pickup, assuming the driver behind them needed help. He was shot eight times.

After the initial shooting in the last hour of March 14, 2019, law enforcement spread out into the county searching for the gunman. After pulling up behind Bertsch's SUV, Trooper Wade Palmer was shot in his patrol car not long after midnight on March 15.

Hays, remembered by friends and family as a diesel mechanic wiz, died at the scene. Julie Blanchard later died in Washington, where she was undergoing rehabilitation for her gunshot wounds. At a memorial at the Jack Saloon in Lolo last year, friends remembered her as a driver who taught her sons to be men.

Palmer has been on the mend since the shooting — gunfire pierced his head, face and neck — that left him unable to walk or speak. Trips back and forth between his home in the Bitterroot Valley and a hospital in Salt Lake City, Utah, however, have proved restorative. Missoula County Commissioners in May dedicated a day to him.

Bertsch was heavily armed in the evening of March 14. According to court filings, law enforcement located two "AR style" rifles, one with 30 rounds in the magazine and the other carrying 11 rounds, along with a .45-caliber handgun with another 11 rounds in Bertsch's SUV. Court documents describe several "high-caliber rounds" and AR-15 rounds strewn about the first shooting scene.

Bertsch was ultimately apprehended six hours after the Palmer shooting, not far from that scene.

An earlier version of this story misstated Johnathan Bertsch's hometown.

Law enforcement has closed a 46-year-old cold case in the death of an abducted Missoula child, the Missoula Police Department said Monday in a joint press conference with local and state officials.

A deputy Yellowstone County attorney was arrested over the weekend on suspicion of drunken driving.

Officials have identified the 33-year-old man killed Sunday night in a shooting as Kyle Reed, a Billings resident.

One man was fatally shot Sunday night and the Billings Police Department is investigating.

Arrests made after shooting, chase in Billings

Johnathan Bertsch appears for an arraignment at the Missoula County Courthouse last march. Friday, Bertsch pleaded guilty to one count of deliberate homicide and three counts of attempted deliberate homicide in back-to-back shootings killed two and wounded two others, including a  Montana Highway Patrol trooper.