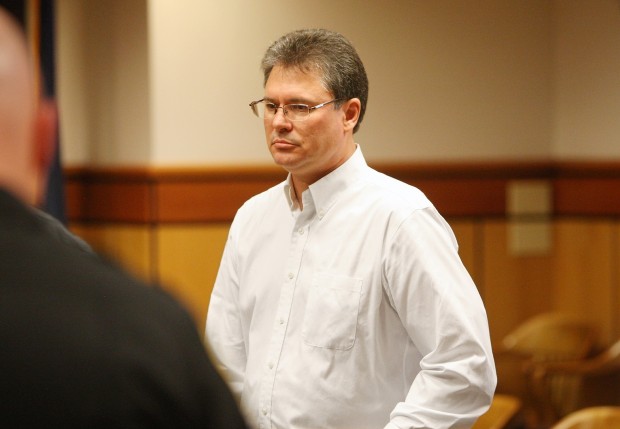 Rambold stands in the courtroom after being sentenced by Baugh on Aug. 26. Baugh sentenced Rambold to 15 years in prison, with all but 31 days suspended, for sexual intercourse without consent. Rambold received credit for one day already served. 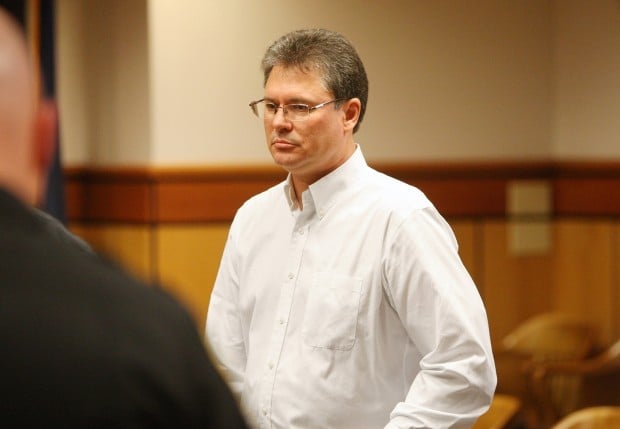 Stacey Rambold stands in the courtroom after being sentenced by Judge G. Todd Baugh on Aug. 26.

Judge G. Todd Baugh sentenced Stacey Dean Rambold to 15 years in prison, with all but 31 days suspended, for sexual intercourse without consent.

Rambold, 54, will be given credit for one day already served. He was handcuffed and led to jail at the close of the hearing.

The judge's sentence was not received well by the girl's mother, who repeatedly screamed "You people suck!" and stormed out of the courtroom.

Auliea Hanlon testified earlier at the hearing that her daughter's relationship with Rambold was a "major factor" in her suicide, and she begged the judge to order Rambold to prison.

"Please put him behind bars," the woman said.

Souza said Rambold targeted a troubled young girl and violated his position of trust as a teacher by engaging in a sexual relationship with a student.

Rambold pleaded guilty to the single felony charge in April in a case that began in 2008, when school officials and police first learned of the sexual relationship between Rambold and the girl, Cherice Morales.

Rambold was placed on paid leave in April of that year and resigned from his teaching job three months later. He also surrendered his teaching certificate.

In October 2008, prosecutors charged Rambold with three counts of sexual intercourse without consent, alleging that the then-49-year-old man had an ongoing sexual relationship with Morales, who was 14 at the time.

While the case was pending, and a few weeks before her 17th birthday, Morales took her own life.

The girl's death caused problems for the prosecution, and in July 2010 Rambold entered into a deferred prosecution agreement with the Yellowstone County Attorney's Office.

The agreement called for prosecutors to put the case on hold for three years. The charges would be dismissed, the agreement stated, if Rambold completed a sex offender treatment program and complied with other conditions.

Rambold also admitted to one of the rape charges, and he agreed that his admission could be used against him.

The case was revived last December, when prosecutors learned that Rambold had been terminated from the sex offender treatment program.

On Monday, the treatment provider, Michael Sullivan, testified that Rambold was terminated from the program last November after completing two of the three treatment phases.

Problems arose last August, Sullivan said, when Rambold began missing meetings. After meeting with Rambold, Sullivan said, the man appeared to be back on track with his treatment.

The violations were serious enough when taken together to kick Rambold out of the program, although it was learned that the minors Rambold was visiting were family members.

Rambold's attorney, Jay Lansing, argued Monday for the suspended sentence. He said Rambold lost his career, his marriage and his home and has suffered a "scarlet letter of the Internet" as a result of publicity about the case.

Rambold has since continued his treatment with a different program, Lansing said, and an evaluation found that he is a low risk to re-offend and could be treated in the community.

Rambold's criminal history includes only a traffic violation, but now he will be required to register as a sex offender for the rest of his life, the attorney said.

Lansing asked the judge to "consider how he's been punished to this point."

Baugh said he was not convinced that the reasons for Rambold's termination from treatment were serious enough to warrant the lengthy prison term suggested by the prosecution.

Baugh said he listened to recorded statements given by Morales before her death and believes that while she was a troubled youth, she was "as much in control of the situation" as Rambold.

The judge also said Morales was "older than her chronological age."

The case also resulted in a $91,000 wrongful-death settlement between School District 2 and Morales' family, who filed a civil lawsuit against the district.

Rambold had been warned by school officials in 2004 to avoid touching or being alone with female students.

Elephant breaks into kitchen wall looking for snacks in Thailand

Elephant breaks into kitchen wall looking for snacks in Thailand

8 children in van killed in crash in Alabama

8 children in van killed in crash in Alabama

A group of Montana lawyers says it is giving a lifetime achievement award to a state judge for his many years of service, despite the judge be…

School District 2 and its insurance carrier will pay just under $91,000 to the family of Cherice Moralez, a Senior High student who committed …

How do you evade punishment for raping a minor?

In the July 14 paper in the Local and State section, if I am reading the articles right, a teacher rapes a 14-year-old student and has to go t…

A settlement has been reached in the wrongful-death lawsuit filed against former Billings teacher Stacey Rambold.

Rambold stands in the courtroom after being sentenced by Baugh on Aug. 26. Baugh sentenced Rambold to 15 years in prison, with all but 31 days suspended, for sexual intercourse without consent. Rambold received credit for one day already served.

Stacey Rambold stands in the courtroom after being sentenced by Judge G. Todd Baugh on Aug. 26.