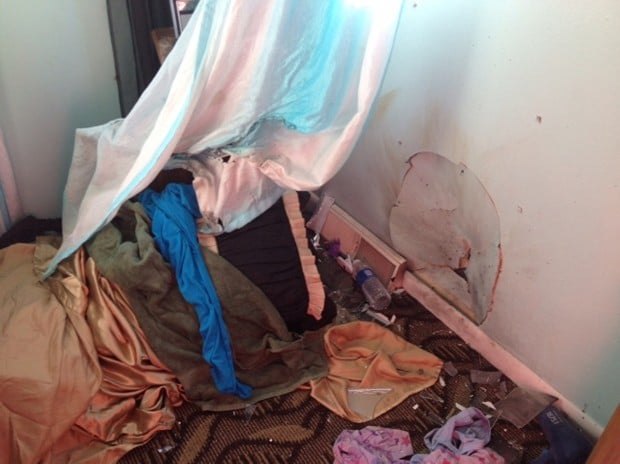 This photo, provided by Jackie Fasching, shows damage from a flash grenade to the bedroom of a West End home that was raided by the Billings Police Department's SWAT team on Oct. 9. A 12-year-old girl was burned when the grenade went off. 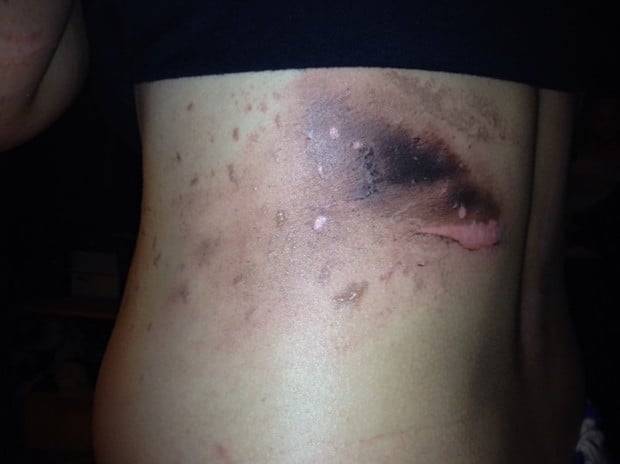 Jackie Fasching provided the Gazette with this photo, which shows burns to her daughter's side caused by the detonation of a flash grenade during a SWAT raid on Oct. 9.

A 12-year-old girl suffered burns to one side of her body when a flash grenade went off next to her as a police SWAT team raided a West End home Tuesday morning.

"She has first- and second-degree burns down the left side of her body and on her arms," said the girl's mother, Jackie Fasching. "She's got severe pain. Every time I think about it, it brings tears to my eyes."

Medical staff at the scene tended to the girl afterward and then her mother drove her to the hospital, where she was treated and released later that day.

A photo of the girl provided by Fasching to The Gazette shows red and black burns on her side.

Police Chief Rich St. John said the 6 a.m. raid at 2128 Custer Ave., was to execute a search warrant as part of an ongoing narcotics investigation by the City-County Special Investigations Unit.

The grenade is commonly called a "flash-bang" and is used to disorient people with a bright flash, a loud bang and a concussive blast. It went off on the floor where the girl was sleeping. She was in her sister's bedroom near the window the grenade came through, Fasching said.

A SWAT member attached it to a boomstick, a metal pole that detonates the grenade, and stuck it through the bedroom window. St. John said the grenade normally stays on the boomstick so it goes off in a controlled manner at a higher level.

However, the officer didn't realize that there was a delay on the grenade when he tried to detonate it. He dropped it to move onto a new device, St. John said. The grenade fell to the floor and went off near the girl.

"It was totally unforeseen, totally unplanned and extremely regrettable," St. John said. "We certainly did not want a juvenile, or anyone else for that matter, to get injured."

On Thursday, Fasching took her daughter back to the hospital to have her wounds treated.

She questioned why police would take such actions with children in the home and why it needed a SWAT team.

"A simple knock on the door and I would've let them in," she said. "They said their intel told them there was a meth lab at our house. If they would've checked, they would've known there's not."

She and her two daughters and her husband were home at the time of the raid. She said her husband, who suffers from congenital heart disease and liver failure, told officers he would open the front door as the raid began and was opening it as they knocked it down.

When the grenade went off in the room, it left a large bowl-shaped dent in the wall and "blew the nails out of the drywall," Fasching said.

St. John said investigators did plenty of homework on the residence before deciding to launch the raid but didn't know children were inside.

The decision to use a SWAT team was based on a detailed checklist the department uses when serving warrants.

Investigators consider dozens of items such as residents' past criminal convictions, other criminal history, mental illness and previous interactions with law enforcement.

Each item is assigned a point value and if the total exceeds a certain threshold, SWAT is requested. Then a commander approves or rejects the request.

In Tuesday's raid, the points exceeded the threshold and investigators called in SWAT.

"Every bit of information and intelligence that we have comes together and we determine what kind of risk is there," St. John said. "The warrant was based on some hard evidence and everything we knew at the time."

But Fasching said the risk wasn't there and the entry created, for her and her daughters, a sense of fear they can't shake.

"I'm going to have to take them to counseling," she said. "They're never going to get over that."

A claims process has already been started with the city. St. John said it's not an overnight process, but it does determine if the Police Department needs to make restitution.

"If we're wrong or made a mistake, then we're going to take care of it," he said. "But if it determines we're not, then we'll go with that. When we do this, we want to ensure the safety of not only the officers, but the residents inside."

No arrests were made during the raid and no charges have been filed, although a police spokesman said afterward that some evidence was recovered during the search. St. John declined to release specifics of the drug case, citing the active investigation, but did say that "activity was significant enough where our drug unit requested a search warrant."

Fasching said she's considering legal action but, for now, is more concerned about her daughters.

"I would like to see whoever threw those grenades in my daughter's room be reprimanded," she said. "If anybody else did that it would be aggravated assault. I just want to see that the city is held accountable for what they did to my children."

A Helena man was arrested in connection with a robbery at a local bank Friday afternoon.

This photo, provided by Jackie Fasching, shows damage from a flash grenade to the bedroom of a West End home that was raided by the Billings Police Department's SWAT team on Oct. 9. A 12-year-old girl was burned when the grenade went off.

Jackie Fasching provided the Gazette with this photo, which shows burns to her daughter's side caused by the detonation of a flash grenade during a SWAT raid on Oct. 9.