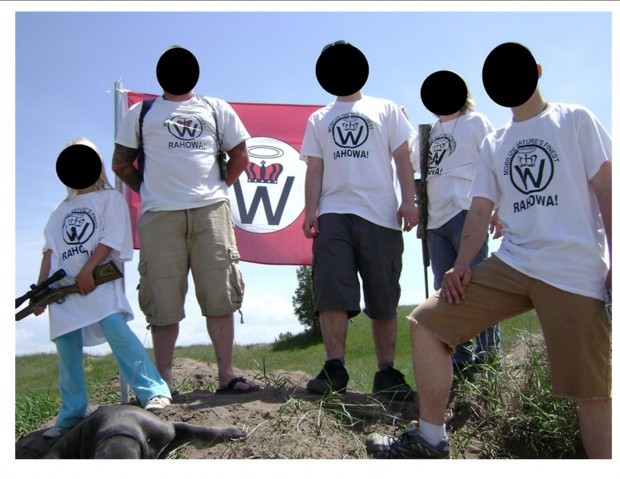 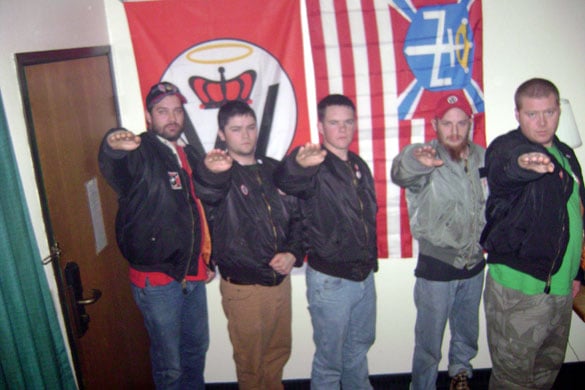 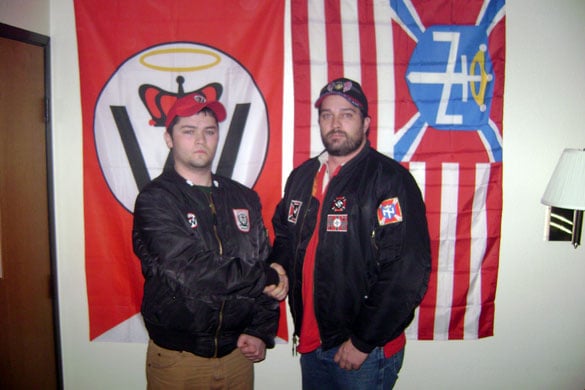 Photo of Allen Goff (left) with unidentified man at a 2009 gathering of white supremacists in Washing state. (Courtesy photo) 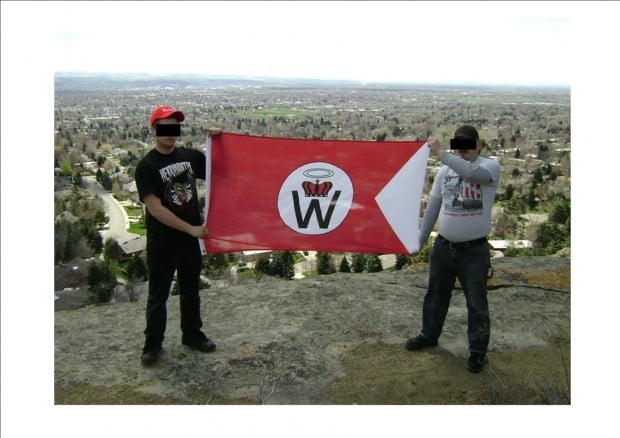 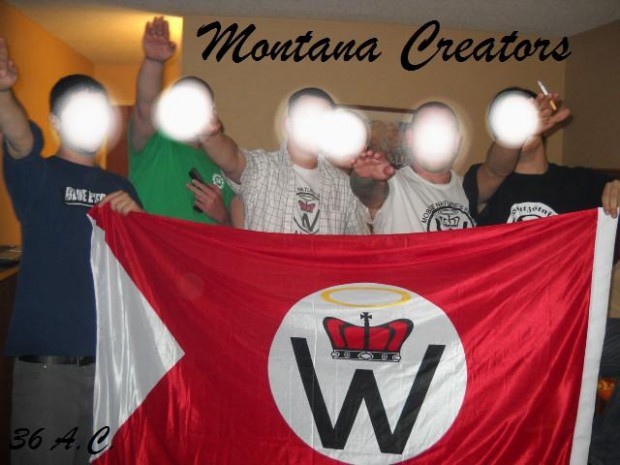 A District Court jury convened this week at the assault trial of Allen Goff will hear evidence about a shooting incident involving teenagers at a late-night party at a Billings home.

What the jurors won’t hear is that the teenager accused of the shooting is a member of a small but committed group of Montana white supremacists whose activities have been closely monitored for several years.

Long before the shooting last July that left a Hispanic teenager wounded, Goff came to the attention of the Montana Human Rights Network, a Helena-based non-profit that combats discrimination and monitors hate groups across the state.

Goff has been linked to racist activities in Billings since at least 2006, said Travis McAdam, the network’s executive director.

“He’s been on the radar for awhile,” McAdam said.

The judge presiding over Goff’s assault trial previously ruled that evidence linking Goff to a white supremacist group known as The Creativity Movement is not admissible at his trial.

Prosecutors had sought to show the jurors pictures of Goff with guns, a swastika, and supremacist literature. The evidence was necessary, prosecutors said, to prove that the shooting last July 27 was racially motivated and falls under the state’s hate crimes law, which allows for an enhanced sentence.

Goff’s attorney, Jack Sands, argued at a court hearing last month that the shooting was not racially motivated and the evidence was not relevant. To support his position, Sands said that Goff is part Native American.

In a follow-up telephone interview with a reporter, Sands said that Goff is also part Jewish. Sands later declined to comment further for this story.

McAdam said the Billings community should be aware of Goff’s activities and his stature as a leader among the state’s white supremacists. While it’s a small group of a dozen or fewer members across the state, McAdam said, they are dedicated to their belief in the need to prepare for a “racial holy war.”

“These are people who have really bought into that,” McAdam said. “That’s a scary vow, and it should be a concern to the community.”

Although only 17, Goff is one of the group’s most active members, whom McAdam described as a “ringleader.” The Billings teenager was named by his supremacist peers as the “Creator of the Year” in 2009, a title he earned for his “activism” and “support and aid of creators.”

“He’s definitely not just a rank and file member,” McAdam said. “He’s a leader in Billings and also in Montana.”

Goff’s roots in racist activism may have started at an early age when he was recruited by a group of Billings skin-heads who were conducting “park patrols” to hassle and run off minorities. That group, known as the Montana Front Working Class Skinheads, was shut down in 2004 when the most of its members received lengthy federal prison sen-tences.

Goff’s name surfaced about two years later when he and two other Lewis and Clark Middle School students were found in possession of swastikas and white supremacist literature. The boys had also drawn pictures of the school floor plans and depictions of violence reminiscent of the attack at Columbine High School.

School and law enforcement officials declined at the time to discuss the incident, citing the students’ privacy rights. But McAdam said the network was informed by authorities of Goff’s involvement.

“Once his name came up we thought he was central as to what was going on,” McAdam said.

A short time later, McAdam said, the network found a MySpace page with young men from Billings posing with a white supremacist flag.

“We thought, uh-oh, that’s both interesting and disturbing,” McAdam said.

The network began closely following the Internet activity of the Billings teenagers, and they soon found a website dedicated to the Montana Creativity Movement. Goff was an active participant on the website, McAdam said, even on occasion using his real name while posting comments.

McAdam said his organization later determined that Goff had created the website, which offered Creativity Movement materials to anyone who was interested.

In the spring of 2008, Goff’s name surfaced again when white supremacist activists vandalized the Beth Aaron Synagogue, an Asian restaurant and an adult bookstore in Billings, McAdams said. No charges were filed in connection with those crimes, but McAdam said the events heightened his group’s concerns about such activities in the state’s largest city.

The network focused its interest on Goff again in January 2009, when The Billings Gazette profiled a member of the Creativity Movement after supremacist flyers were anonymously left at local churches and homes. The subject of the story identified himself as Kyle Anderson, a 19-year-old Billings man.

Anderson was quoted extensively in the story, but he would not agree to a photograph that showed his face.

McAdam said the news story raised suspicion that Anderson was actually Goff, who was 17 at the time. Shortly after the story was published, Goff confirmed on the Creativity Movement’s website that he was Anderson, McAdam said.

“There is no doubt that Kyle Anderson is Allen Goff,” McAdam said.

Goff was charged six months later with shooting 17-year-old Christopher Ortiz in the leg outside a residence on Avenue C.

When Goff was arrested, officers said they found weapons, ammunition and electronics in a backpack he was wearing. The backpack was decorated with a swastika and the words “Montana 136 Front.”

Investigators later found numerous pictures and documents linking Goff to the Creativity Movement on a digital camera and other electronics recovered from the backpack. None of those items will be shown to the jury at his trial this week.

Two days after he was acquitted of a shooting that prosecutors said was racially motivated, Allen Goff showed up at a public exhibit in Billin…

Evidence of white-supremacist beliefs at issue in assault case

A District Court judge has thrown out evidence linking a Billings teenager to a white supremacist group at his upcoming assault trial.

A 17-year-old Billings boy accused of shooting another teen in the leg was charged as an adult Monday in state District Court.

A 17-year-old from Billings is being held on suspicion of felony assault with a weapon, after an early morning fight that left another teenage…

Recent white supremacist activity in Billings is nothing new, and community response over time will determine its prevalence in town, a Montan…

White-supremacist fliers turned up on the doorsteps of a Billings neighborhood Wednesday, prompting complaints to the Police Department.

A new image for white supremacists

Kyle Anderson blends in with the crowd of businessmen and students sitting in a Billings coffee shop. His dark hair is cropped short. He wears…

A $5,000 arrest warrant was ordered Tuesday for the 18-year-old reputed leader of white supremacist group who was acquitted of assault charges…

Photo of Allen Goff (left) with unidentified man at a 2009 gathering of white supremacists in Washing state. (Courtesy photo)