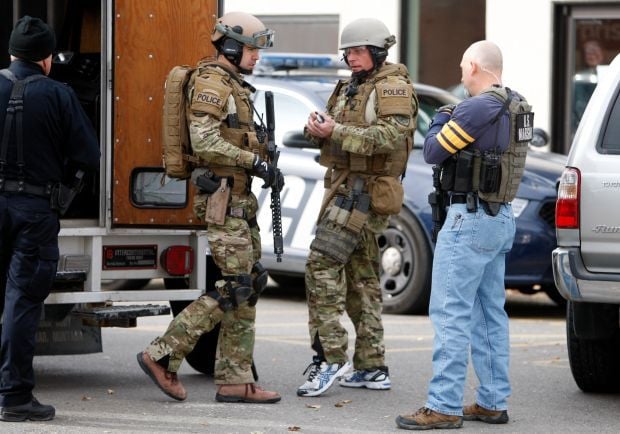 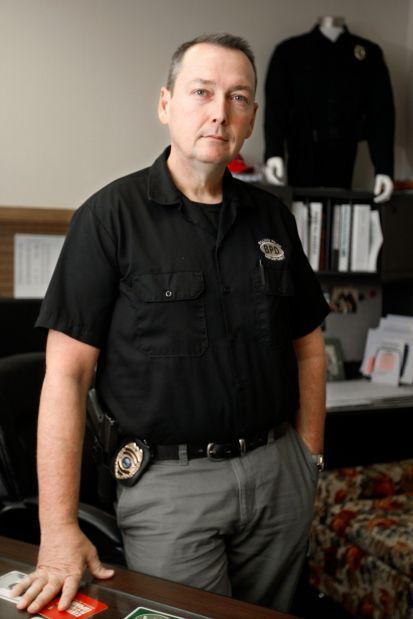 Billings Police crime prevention and public relations officer Tom Keightley is a police negotiator, one of six certified crisis negotiators with the department. 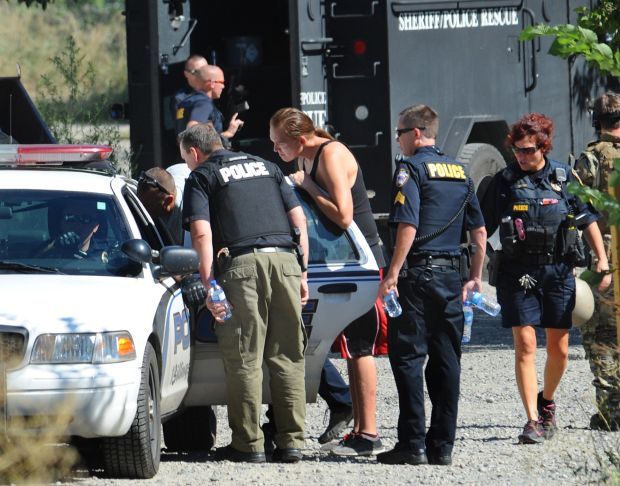 Billings police and SWAT team members leave the scene with the subject of an armed standoff at a house on South Billings Boulevard on Sept. 8.

On a Monday morning in March 2012, a 20-something man stepped out onto the Rims above Billings and appeared to be considering jumping to his death.

As police watched and tried to talk the man back from the ledge, he took things out of a pocket and dropped them.

That was a big red flag for Billings Police Officer Tom Keightley, one of six certified crisis negotiators with the department who are called out a half dozen times a year to talk down suicidal or homicidal people.

“(Suicidal) people will frequently test the fall by throwing objects off before they jump,” Keightley said recently, recalling the four hours he spent talking with the man on the Rims. “He was very distraught, and he was intoxicated and felt like he had lost his girlfriend.”

As a police negotiator, Keightley also faced another big hurdle: The suicidal man’s brother had recently been gunned down by law enforcement.

But by using tactics that might seem more likely for a licensed counselor than a cop, Keightley and the other negotiators working with him were able to safely talk the man back from the ledge and take him to a hospital for a mental health evaluation.

“He walked out of there and turned and put his hands behind his back so we could put him in handcuffs,” Keightley said. “There was no struggle, nobody being thrown on the ground.”

The Yellowstone County Sheriff’s Office also has a similar group of five deputies trained as hostage negotiators, as well as numerous other deputies trained in crisis intervention, according to Undersheriff Kevin Evans.

In June 2011, deputies talked a suicidal young man down to safety from the Dick Johnston Bridge in Lockwood.

“He just didn’t think it was worth it anymore,” Sheriff’s Lt. Roger Bodine told The Gazette after the incident. “He was going to jump, there’s no doubt in my mind.”

Bodine credited the safe resolution of the standoff to Crisis Intervention Team training, a 40-hour program that teaches law enforcement officers tactful ways to interact with and help people who may pose a threat, but are dealing with mental health or substance abuse problems, or are simply having a really bad day.

“It’s really a page out of the negotiator’s handbook,” Keightley said of crisis intervention training. “About 50 percent of our officers have been through the training, and as we get new officers, now we make it mandatory.”

Keightley and the other crisis negotiators use active listening and other techniques to build a rapport and convince people not to hurt themselves or others.

“It’s OK to be touchy-feely if it works,” he said. “What that allows us to do is use words instead of force or threats of force and to resolve a situation peacefully and calmly.”

Choosing to be part of the police department’s team of crisis negotiators, a group headed by Sgt. Shawn Finnegan, is a role members of the group take on in addition to their day-to-day responsibilities.

Each of the officers has a minimum of three years with the department, extensive specialized training and is certified as a crisis negotiator by either the FBI or the International Association of Hostage Negotiators.

The negotiators work as a team, unlike how hostage negotiators are portrayed by Hollywood, Keightley said. “They always show this one guy talking, and it seems like he has no help.”

In actuality, the lead negotiator is backed by another negotiator who is listening to and watching what’s happening and making suggestions on how to resolve the situation. As that’s happening, another officer is getting background information on the person in crisis and others who may be in danger and reaching out to friends or family who may be able to help.

In the case of the man standing on the Rims, this meant bringing his mother and girlfriend to the scene. Allowing the man to hug his mother before handcuffing him and putting him in a patrol car was the “deciding factor” in ending the standoff peacefully, according to Keightley.

There are other striking differences between the reality of crisis negotiation and how negotiators are portrayed on the silver screen.

For one, the idea of an officer trading himself for a hostage is out of the question.

“We absolutely do not do that,” Keightley said. “We never make a trade if we don’t have to at all. We don’t want to get into a quid pro quo sort of thing.”

And actual hostage situations are extremely rare. “I’ve been doing this for four years now as a negotiator,” he said. “I’ve never seen or even heard of a true hostage situation out here in Montana.”

Evans said that if the sheriff’s office’s negotiators are called out once a year, “that’s a lot.”

And preferably, crisis negotiation takes place over a phone, rather than face to face.

“We use a trailer that we’ve equipped for that purpose,” Keightley said.

Working from the trailer offers a couple of advantages: The officers are comfortable, out of the elements and more in control of how the situation plays out.

“A lot of people, when you get into those really prolonged (standoffs), will simply give up through exhaustion,” he said.

The department’s SWAT team is often called to standoffs, but in some situations, such as the man threatening suicide on the Rims, having that extra police presence would have been more of a hindrance than a help.

That wasn’t the case in a standoff in September, when officers in tactical gear surrounded a house on South Billings Boulevard.

An intoxicated woman fired a gun inside the house while two other people were present, said Keightley, who was one of the negotiators present for the standoff.

It took hours, but he and the other negotiators were able to talk the woman down and take her to a hospital.

Nationwide, crisis negotiators have a 92 percent success rate of safely resolving the situations they’re called on to deal with, according to Keightley.

“When you consider what we’re showing up to … that makes it worthwhile,” he said.

Sudanese man in NYC unable to talk to family

A collection of photos from recent law enforcement standoffs in Yellowstone County.

Billings Police crime prevention and public relations officer Tom Keightley is a police negotiator, one of six certified crisis negotiators with the department.

Billings police and SWAT team members leave the scene with the subject of an armed standoff at a house on South Billings Boulevard on Sept. 8.